For some reason, today’s press screening programme for the festival was especially tight, with barely a minute’s breathing room between films, all so we could finish two hours early. Presumably this claustrophobic schedule was to accommodate a cancelled fifth screening, but as it was, we were presented with four works of highly variable quality, in UK dramas continuing the unofficial festival theme of borders and migration, and a pair of musical offerings in the form of a triumphal concert film from David Byrne and Spike Lee and a Moroccan riff on ‘star is born’ musical and gangland movie tropes.

Best known for her supporting work in comedies such as The Thick of It, Joanna Scanlan has in past work such as Pin Cushion, revealed a great poignancy and maturity as a naturalistic dramatic actor, and she is given possibly the best role of her career in After Love as grieving Muslim woman Mary. Another feature debut, this time from writer-director Aleem Khan, whose restrained style of direction serves his material much better than it has many films earlier in the festival.

Having lost their child years previously, Mary is bereft when her ferry captain husband Ahmed, her partner since adolescence, unexpectedly passes away. She is even more aghast when among his personal effects, she discovers evidence of the double life he had been leading with a French woman across the channel, and her world begins to crumble around her.

What unfolds thereafter is a sombre, often graceful film, that like many of its type relies on a central contrivance and character choice many might find hard to swallow, as when she goes to confront her husband’s mistress and tell her of his death, Mary loses her nerve and pretends to be her new cleaner instead. Despite this rather tired plot device, it does lead to some pointedly impactful revelations and explorations of the emotions of such a situation. The film is anchored by the lonely, often impassive and shy performance of Scanlon as Mary. Once again, she is playing a typically harmless woman pressed into an untenable situation where her emotional needs are not being met, shrinking from confrontation and making the inevitable more painful than necessary. Her performance is supported by the vivid restraint of Khan’s empathetic writing and reserved directing.

With theatres closed, even someone who attends live music gigs as rarely as I do can understand the unfed desire to share in a musical experience with hundreds of other people. Under the circumstances, the closest many might be able to get will be watching a live-streamed performance or a concert film, such as this one by former Talking Heads frontman David Byrne, scheduled to become available on HBO Max from October 17th. Directed for the stage and screen by Spike Lee, who is himself no stranger to the musical mode, as many of his most iconic scenes have been set to popular music, and I contend that his own recent musical Chi-Raq is incredibly underrated. He directs with his usual visual flair using choreography, camera movement and lighting to accommodate the minimalist stage design, as Byrne and his band perform excerpts from his most recent album American Utopia.

As the performance begins, one might readily take it for a rock opera or conceptual piece, kicking off with the album’s closing track “Here”, as Byrne sings holding up a prop brain, the glistening chain curtain bordering the stage visually depicting what might be taken for rapidly firing neurons, more playful and alive than constricting. He is soon joined on the stage by backing vocalists and dancers Chris Giarno and Tendayi Kuumba, who frolic sprite-like throughout the performance, and eventually the full 11-piece band, performing with their instruments strapped around their necks. All, including Byrne are barefoot in chintzy blue-steel suits, matching the surrounding set and lighting.

As Byrne states in the short, almost stand-up interludes between songs, the inspiration behind the performance was to strip the stage back to only essentials, the players and the audience, and the playful, quirky choreography makes the most of the space they have. For example, during the propulsive, glittering rager, “I Should Watch TV”, the band move up one end of the stage, representing a TV screen in a box of light. In “Blind” the camera tips with the cast like a tempest-tossed ship and Lee even manages to sneak one of his patented Steadicam shots into “Bullet”. The lighting shifts from a cooling blue to a warm welcoming gold for “Everybody’s Coming to My House”. Some strobe lighting effects are used at one point, which although reliably striking, always feels excluding to me, knowing audiences with photosensitive epilepsy would likely have to be turned away.

The performance itself takes a moment to truly get going with a fairly mild opening act. However it eventually steps into gear, the nonsense poem “I Zimbra” followed by “Slippery People” is a fabulous one-two punch of euphoric energy that the band keeps up throughout the remainder of the evening. The Giarno and Kuumba back up Byrne’s extraordinary vocals (which are left very bravely exposed on a track like “Bullet”) tremendously and add a tonne of jubilant energy to the gig. Highlights from among the band also include Bobby Wooten III’s slap bass riffs and Jacqueline Acevedo’s infectious energy continually draws the eye, skipping through “Once In a Lifetime” with her cymbals, enjoying herself immensely, as everyone is in the eccentric group number “Toe Jam”.

The set also includes a couple of fan favourite Talking Heads numbers like “Burning Down the House”, to which the Broadway audience of hippy boomers readily join in. The performance takes a turn for the upliftingly political in the last leg, with Byrne passionately endorsing voter registration and a back projection of Colin Kaepernick as the cast all take a knee. In exploring different interpretations of the lyrics of “Everybody’s Coming to My House”, Byrne reminds his audience that “most of us are immigrants and we couldn’t do it without them”. In both politics and music, Janelle Monae was brought to mind even before Byrne and company performed one of her songs, the deeply moving anti-police brutality protest anthem “Hell You Talmbout”, where Lee’s penchant for protest visuals and ferocity comes out in full force.

By the time the evening closes with Byrne and company leading the audience in a performance of “Road to Nowhere”, and Lee’s camera follows the players into the audience, backstage and finally out onto the streets of New York on their bikes, David Byrne’s American Utopia has achieved such a sincerely jubilant register, that it would hardly have mattered if the funky, rich, warming post-rock weren’t really your thing.

One of the most consistent themes throughout the festival this year, along with police violence, has been migration and borders, with almost a dozen films screened here connected with the issue in some way, nearly always from the perspective of the migrants themselves. Such is the case with Limbo, which, as the title suggests finds its all-male immigrant characters stuck on a purgatorial Scottish waystation, apparently twinned with Father Ted’s Craggy Island, enduring comical cultural awareness classes from councillors (Sidse Babette Knudsen and Kenneth Collard) and endless rewatches of Friends, as they await visas allowing them to move to the mainland and find work. 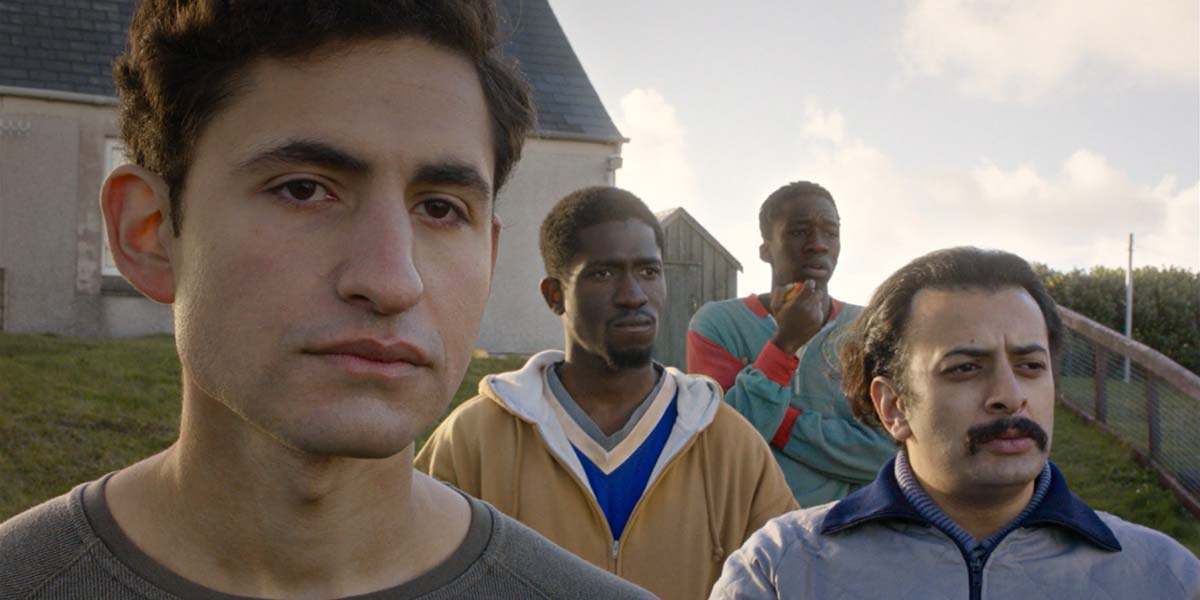 Here is where we find Syrian refugee Omar (Amir El-Masry) and his housemates, the perpetually optimistic Freddie Mercury idolising Farhad (Vikash Bhai) who has been there for years, and bickering brothers Wasef and Abedi (Ola Orebiyi and Kwabena Ansah). Omar spends his days dragging around an Oud he has lost the will to play, and enduring the casual racism of comically dim-witted locals. The film uses this eccentric island as a stage on which to explore the frustrations and alienation of being so far from home and the struggle he has fled, touching on themes of brotherhood, lost home and exilic identity, as well as the inhuman ways developed nations treat migrants.

Initially the film establishes a dryly comic tone, treating its subject in a similar way to much of the recent work of Finnish director Aki Kaurismaki, although in my opinion much more successfully. There are times when Limbo is easily the funniest film of the festival. However, as the film moves into its second half, and winter sets in on the island, it grows progressively more serious and tragic, with the humour all but dissipating completely and the grimly absurd interiors give way to the sincere and sublimely beautiful frozen landscapes.

I want to be able to tell you that the day continued its strong run and ended on a high note, but unfortunately it ended on Zanka Contact instead, a bizarrely dated and tonally dissonant collage of pulp fiction and weak writing. The film follows Snake Larsen (Ahmed Hammoud), a has-been, heroin addicted rocker and Ragae (Khansa Batma), a firebrand young sex worker with a god-given talent for singing, who find themselves attached to one another after they get in a car accident together. Zanka Contact comes out of the gate with a hyperactive style that soon levels off, settling into a comfortable groove as something more pedestrian. I’m still not sure which I preferred but neither did much for me.

The film has a glossy populist filmmaking energy, with an edge of darkness and brutality that the weak, formulaic writing cannot support or justify. Ragae tries to get Larsen off heroin which he attempts to extricate her from the control of her abusive pimp. The obvious comparison is to the ‘a star is born’ formula, but Zanka Contact lacks any of the verisimilitude or virtuosity that made the most recent film version of that story so captivating. I honestly have no idea who this film is supposed to appeal to, with a mixture of tones I doubt any film could have pulled off successfully. Some scenes worked well enough on their own as damage porn pulp fiction, particularly in the last quarter, but the whole is as boringly and annoyingly unpleasant as it is derivative.