This week we’re attempting to live off the land, traverse the wild outdoors, and see how long we can survive. Or maybe we’ll just play an engrossing visual novel. You never know what’s on the docket when we talk about what We’re Just Playing…

Survival games aren’t my cup of tea, but the eShop always has these indie games priced so tantalizingly low. I can’t help it! My game catalog is enormous on the Switch. Now if I could just hunker down and commit to playing just one of them for any consistent period of time. Will I ever cure my polygamory? Will I ever get the New England Journal of Medicine to recognize my made up word as a real affliction? Probably a ‘no’ on both fronts. But getting back to survival games, this week I downloaded the demo of The Survivalists and purchased The Flame in the Flood, two games with a thematic link: Stayin’ alive.

I suppose you could consider Stardew Valley something of a survival game. Sure, the stakes were low, and it was more of a farming sim, Harvest Moon-style affair, but I liked it well enough. I eventually became bored with it, much like I did playing my first (and only) Animal Crossing game on the Nintendo DS. I have a thing about games with no real ending. I enjoy games that allow for aimless wandering, but I need to know there is a final destination somewhere out there.

I snapped up The Flame in the Flood this week because I recalled being interested in it based on it’s trailer that features the catchy song “Landsick” by the game’s composer and singer, Chuck Ragan. This song also plays during your first trek down the rapids in your rickety raft as you try to understand the controls and mechanics while dodging debris and searching for landing docks.

This game is all about preparation, planning, action, decisiveness, perseverance, forethought, organization, and good old fashioned reflexes. Unfortunately, I really don’t possess many of those traits. Certainly not enough of them to live very long in this game’s unforgiving world.

Your goal is to get a young girl named Scout down the river, making your way through 10 distinct areas. There is a campaign mode, meaning this game does indeed have an ending. There is also an endless mode where you simply try to survive as long as you possibly can. 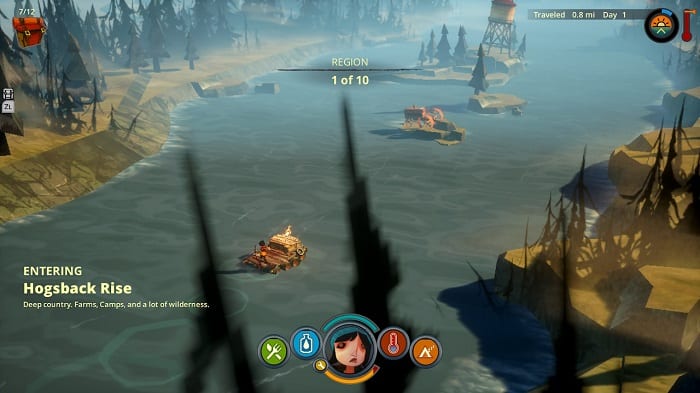 Once I realized a few key gameplay details things became clearer for me. I was unaware that you are traveling with the current, so if you miss a landing or a campsite, you can’t turn around and go back. It’s gone. Often times, you’ll see markers for multiple upcoming docking points, meaning you’ll have to check the markers to see what kind of areas they are, and if you need to visit one over the other. You can’t go every where, the game will force you to make choices frequently and on the fly.

You’ll need to keep yourself fed, hydrated, properly clothed and healthy. This means you’ll need to stop at as many docks as possible early on so you can gather supplies. However, you have a finite amount of slots to hold items. You can have your dog (Aesop or Daisy) carry some items for you, or you can leave some items back on the raft at the dock, but I still found my carrying capacity to be a little lacking.

The problem I had with this game—in the admittedly short period of time I played it—was that I spent most of my time moving through menus. If I wasn’t trying to make room for items, I was crafting items, or shuffling things between myself and the mutt, or running back to the dock to dump items on the raft. The problem (early on) is, you’re not always sure which items you need to hang onto because you haven’t memorized what items are needed to craft newer, better items.

Eventually you gain the resources to trap and capture small animals for food. This helps, but the game never relents, and while it’s true to life in that Mother Nature is unforgiving, it is somewhat out of your control what the game decides to give you in terms of scavengable items. A run can come to an abrupt end if the weather gets unexpectedly rough. Outside campfires become extinguished, and if you don’t have enough food or water to sleep through the storm, you’ll need to board your raft and venture out into choppy waters in search of more areas that will hopefully keep you alive one more day.

It’s an interesting concept, and the game is difficult by design, but I wonder how long I’ll play it for. There are story elements, and NPCs you run into during your journey, and I am going to stick with it a bit longer, but if the gameplay becomes repetitive and unrewarding, it might fall off my radar.

While there is an Endless Mode where play to see just how long you can survive, the game offers a Campaign as well, meaning this game indeed does have an ending.

Again, this isn’t my type of game, so the problems I have with it could be based on my preference in game genres, but there is enough here to keep me engaged for a little longer. I’ve read people complain that the randomization of items and areas in the world leads to “unfair” runs, but I don’t ascribe to that philosophy. It’s a survival game, so I don’t want to hear any excuses. “J.S.S.” as they say over on The Walking Dead.

I mentioned Stardew Valley earlier, and The Survivalists definitely has a Stardew Valley feel to it. As a shipwreck survivor whose raft crashed on an island, you wander around gathering supplies, crafting items, engaging a combat with animals and angry locals, and basically trying to set up a society from scratch.

The animation is a lush 16-bit style that is full of small details. Much like The Flame in the Flood, the game drops you into the environment and immediately inundates you with instructions, and button commands, and reminders.

You get a crash course in item gathering, crafting, and menu management. Since the menus are a bit more akin to Stardew Valley and Dragon Quest Builders I managed to get the hang of things a little faster playing this game.

Still, once I ventured out past the initial area I was quickly met with wild animals and angry natives looking to protect their precious resources and mysterious vaults.

As I said, this is the demo of The Survivalists, so I’m still leisurely going around my small, semi-secure part of the island, trying to teach my monkey friends some new tricks. In order to alleviate some of the tedious busy work these games often subject you to, they’ve devised a system where you can teach monkeys skills by show them yourself. Sort of a “monkey see, monkey do” idea.

I’m not sure if either of these games will grow on me in any significant way, but they have potential, and still entice me enough to want to go back and commit to survival at all cost. Will I succeed? Well, I’ll probably die in heartbreaking fashion a few too many times and run back to something mainstream, but I’m not counting out these calls to the wild. They both look to have potential, but whether their appeal has legs, for a gamer like me, is yet to be determined.

The past week and a half (or so) I’ve been diving on and off back into the grand mystery of AI: The Somnium Files. I’m now more than two-thirds of the way through the game, with only two main endings left to get, and I can confidently say this visual novel is the real deal.

For those that don’t know, you play as Kaname Date, a cop with an AI in an artificial left eyeball named…AIBA. AIBA can do all sorts of things to aid Date like see through objects, hack into computers, record suspicious activity, and more, and the two of them are a likable, very funny duo, which allows this VN to sidestep a large weakness of the genre, which is bland protagonists. The idea behind a lot of protagonists in VNs is to allow the player to project themselves onto the character and fill in the blank spaces of their backstory with their own head canon, but AI instead makes Date and AIBA two fully realized characters, with Date having a mysterious past I have yet to figure out. 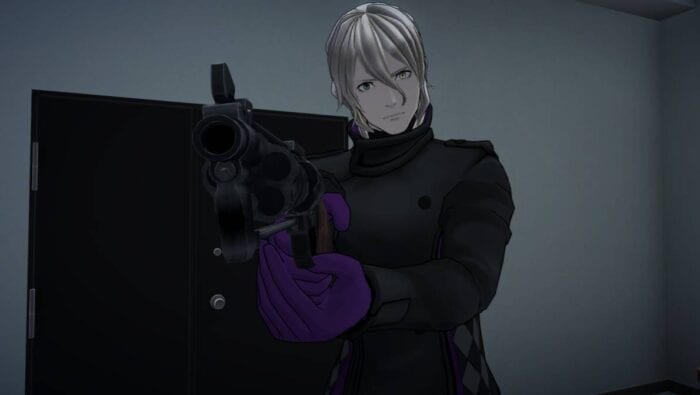 Anyways, Date is on the hunt of The New Cyclops Killer, someone that’s going around taking the eyeballs of their victims before killing them. Much like our own beloved Twin Peaks, the mystery at play here is shockingly deep, with the initial murder of one of Date’s close friends serving as a means of introducing the player to the game’s larger world and cast, and sure enough, there is layer after layer of hidden pasts, motivations, and shady dealings that Date and AIBA go up against in each story route. VNs live and die based on how good their stories are since, outside of entering peoples’ dream spaces to uncover clues, the only interaction you have with the game is reading through dialogue and choosing which locations to investigate, and thankfully this game more than delivers on that front. So far, at least. If the end game reveals are even half as insane as some of the stuff from the Zero Escape series, then this is going to be an absolutely wild ride.

Like a grizzled detective hot on the trail of a killer, I find myself unable to stop thinking about AI: The Somnium Files. It constantly teases the player with more and more questions and mysteries about the identity of The New Cyclops Killer, and I’m very much looking forward to seeing this through to its true ending.