Fargo S4E4 opens with the now familiar tagline, “this is based on a true story.” I often wonder if anyone is fooled by it anymore. I certainly was when I first watched the film, completely engaged in a thrilling and dark tragedy. How many people were angry when they found out they’d been lied to about something as sacrosanct as the truth? The second time I watched it armed with this knowledge, it was a completely different film, hilarious and soulful. Fargo‘s experiment with truth even spawned its own meta-mythology. For years I was among the many who believed a woman tragically died of exposure while searching for the $80,000 Steve Buscemi’s character buried by the side of the road in the 1996 film. Only while fact checking this review did I discover even this story is an urban legend. What does it say that we so badly wanted to believe the Coen’s were playing a dangerous game with the word ‘true,’ that we invented a story that their joke literally cost lives?

Noah Hawley keeps pulling this thematic thread. In Fargo S4E4, Ebal Violante (Francesco Acquaroli) tells Doctor Senator (Glynn Turman) about his struggle understanding the meaning behind the phrase “American values.” He relates it to financial values or human values, two very different things that nonetheless share a commonality in their meaning to an individual. Money has a very literal value, and family and love are natural, and so he surmises that Americans must value something else entirely. “And then I learn the history of this country. Your slavery, the smallpox in the blankets, how you stole the land from the natives. And I realize…to be an American is to pretend.”

Of course this is not a revelation to Doctor Senator, who has plenty of insights to the limits of pretending in America as well as the futility of truth. When we were first introduced to him in the first episode, Senator pridefully tells a white banker that his mother bestowed upon him such a distinguished sounding name in hopes that it would find him success. The banker apparently fails to make the connection between his mother’s given name, “Ma’am,” and Senator’s obvious family history. He is further insulted when after revealing that he does indeed have a PhD from Howard, the banker merely dismisses his achievement. “That’s the Negro school.” We get the sense that Doctor Senator is usually the smartest person in the room, and is wearily used to listening to someone explain the world to him.

Violante, like a lot of characters this season, comes off pretty genuine in this exchange. He has his own limits on American values, and “will not pretend we are at peace when really we are at war.” But Senator quickly shifts the power dynamic by revealing that someone from the Faddas ordered a hit on Lemuel Cannon, Loy’s (Chris Rock) eldest son, which was their justification for dramatically stealing a truckload of guns in the fiery opening sequence of S4E4. The sudden drop in tension reveals Violante actually means what he says and is genuinely disturbed to learn that the Faddas fired the first shot, especially since it undermines his opening thesis. But there is a bigger tragedy in scenes like this when we have two characters who seem to genuinely want to keep the peace but are both at the whims of men with much less wisdom and composure. The small relief that these two might come to an understanding is shadowed by the inevitable war on the horizon.

We’ve been hearing about pretend wars all throughout this season so far. Gaetano mentions that the family home was torn down by the fascists, but also fondly reminisced about killing communists for Mussolini. Gaetano echoes the mythological glory behind Mussolini’s fascism, and despite his defection did not really abandon the cause. He sees his family’s presence in America as an extension of the war, a potential conquest by his displaced countrymen. The battle may have been lost back home, but his father’s death has opened up a new opportunity to reclaim territory on a new western front.

This makes Josto’s confrontation with him in S4E4 so much more humiliating. Gaetano not only goes over Josto’s head with an unnecessary act of brutality, but he makes a tactical error that costs them even more ground. I wasn’t expecting this kind of action from Josto, even with the confidence boost from a combination of cocaine and his fling with Oreatta. But Schwartzmann is killer in this role, and this might be one of my favorite outburst scenes from an actor with an already impressive repertoire of outburst scenes. He brings Josto a frenetic instability, yet delivers sharp confidence when he fires bullets recklessly over his brother’s head. Also worth noting, in contrast to last week’s cinematography that shrunk Josto into the background, the cinematography makes them appear equal. This doesn’t necessarily mean Josto is in a safe position, however. As he points out, Gaetano pulls out a knife in a gunfight. Josto loses his upper hand the moment he reveals he has one, and he still doesn’t understand they aren’t on the same side.

While we’re on the subject of Josto’s cluelessness about the true danger of his relationships, Ethelrida discovers Oreatta’s dark secret. We already knew Mayflower was a tad homicidal, but the scope of her atrocities was still pretty shocking when we see her trophy closet full of items lifted from her victims, including the ominous ring that once belonged to Donatello Fadda, which Ethelrida now takes for herself. What stood out right away in their first encounter back in “Welcome to the Alternate Economy” was how precise and scientific she was in her racism toward Ethelrida, echoing decades of eugenics worming its way into both the law as well as medical textbooks, further entrenching America’s justifying ideology of white supremacy. What we see in S4E4 is the logical extension of this mindset. Her collection reduces her victims down to these totems, further dehumanizing them. Of course her victims also tended to be elderly and sick white people, which on the surface might complicate the connection between Nurse Mayflower’s crimes and her racism. But the history of eugenics goes beyond phrenology and colonialism, it is a dangerously disconnected form of genocide that devalues marginalized people across a broad spectrum.

Once again this leaves us with poor Thurman Smutny. I joked about the character’s portrayal by Andrew Bird as “in over his head” but the poor fool has further tangled himself up in the criminal underworld of Fargo by delivering a heap of cash to repay his debt to Loy Cannon, completely unaware that he was merely returning cash stolen from Cannon in the first place. Thurman’s premature celebratory mood is another tragic example of Violante’s American values, as he has no clue how out of his depth he is but faked it enough for Loy that he thought his wife Dibrell (played by Anji White) would buy his confidence as well. There is already a lot to unpack with the idea of a white man repaying his debt to a Black man with cash stolen from him to begin with, but the added stink left by Swanee vomiting onto the money really drives the point home that this treasure is cursed. I wouldn’t be surprised if it somehow winds up part of the same fortune buried on the side of the road in 1996. 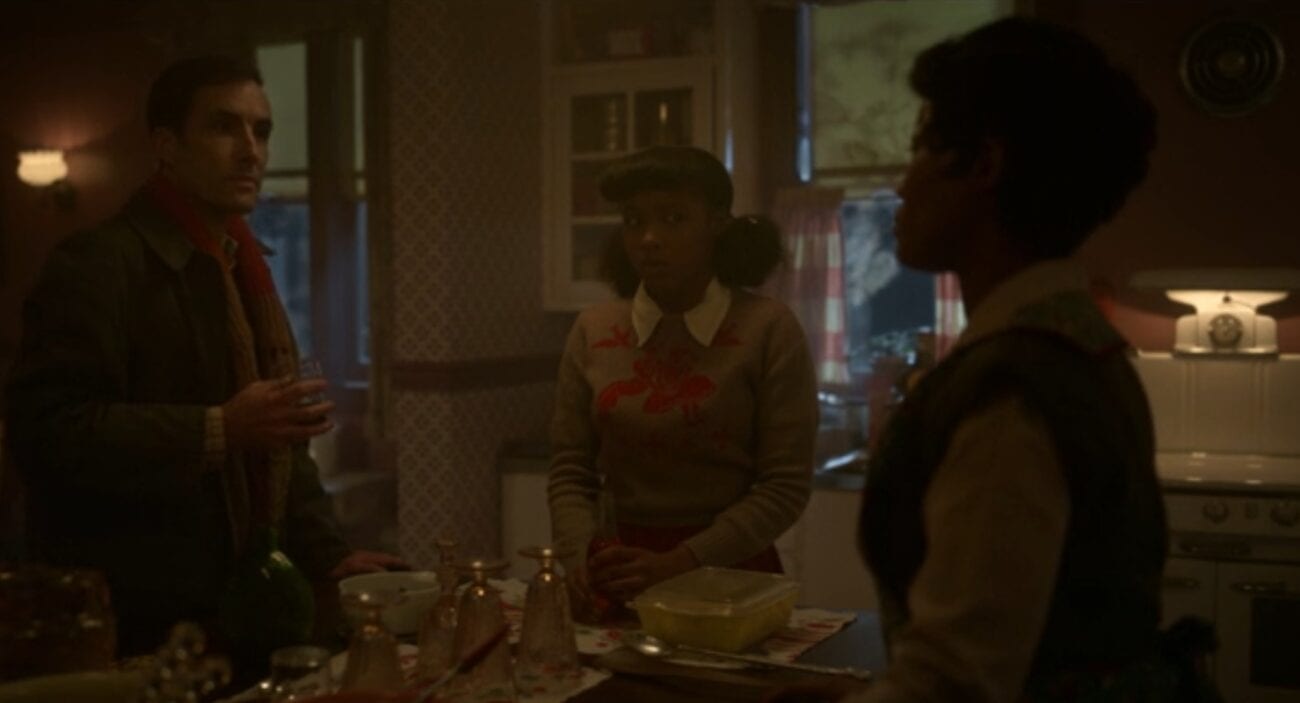