Celebrate Halloween with Mr. Bungle as they present  “THE NIGHT THEY CAME HOME!” a virtual live concert experience. Tickets and exclusive bundles on sale now www.mrbungle.live

October 2020, Haddonfield, Ill. – Mr. Bungle, the NorCal-born band who release their first new album in 21 years, The Raging Wrath of the Easter Bunny Demo, on Oct. 30 via Ipecac Recordings, have announced a Halloween special: “The Night They Came Home!” a virtual live concert experience.

The special event will feature a performance from the current incarnation of Mr. Bungle: Mike Patton, Trevor Dunn, Trey Spruance, Scott Ian and Dave Lombardo. As Rolling Stone said in their Fall music preview: “musical curveballs are encoded in Mr. Bungle’s DNA” so fans can, and should, expect the unexpected. 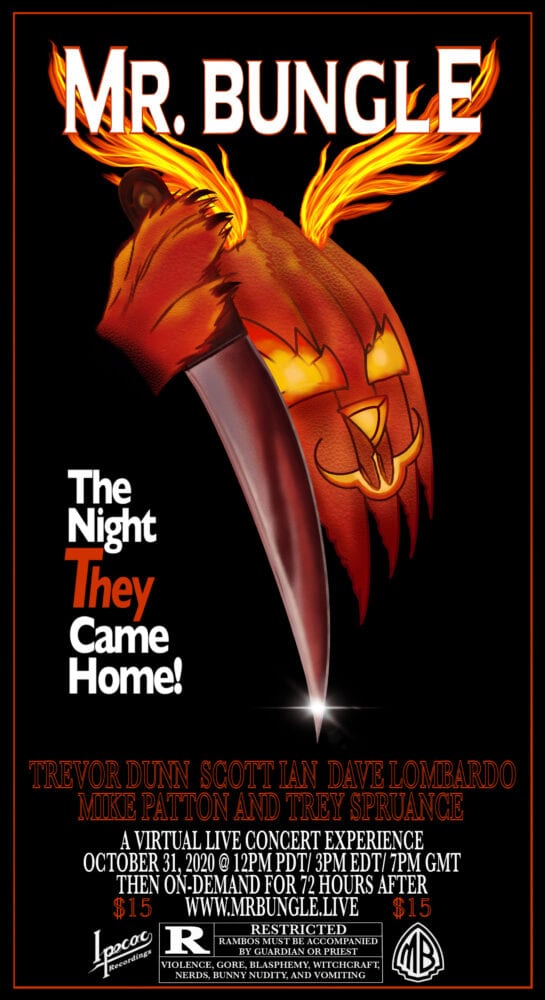 Tickets are $15 and available now via www.mrbungle.live. The first screening airs at 12 noon pacific/3 pm eastern on Oct. 31 with the on-demand program available for the following 72 hours. An array of exclusive, commemorative merchandise, including a limited (1000 copies) neon green vinyl variant, will be available to attendees.

Mr. Bungle was formed in an impoverished lumber and fishing town by a trio of curious, volatile teenagers. Trey Spruance, Mike Patton and Trevor Dunn beget the amorphous “band” in 1985 up in Humboldt County, Calif., sifting through a variety of members until around 1989 when they settled on a lineup that managed to get signed to Warner Bros. Records. No one really knows how this happened and it remains a complete mystery that even the algorithms of the internet can’t decode. Up until 2000 they released three albums (Mr. Bungle in 1991, Disco Volante in 1995 and California in 1999), toured a good portion of the Western hemisphere and avoided any sort of critical acclaim. Some argue that the band subsequently broke up but there is also no proof of this. What is true is that they took 20 years off from performing under said moniker while they pursued various other music that, in contrast, paid the rent. 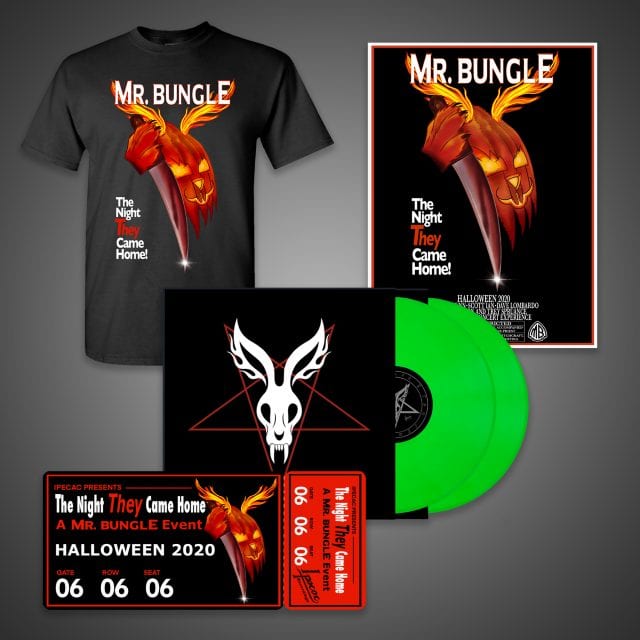 Mr. Bungle announced the forthcoming release of The Raging Wrath of the Easter Bunny Demo to great fanfare. The album news followed a spate of early 2020 live performances that sold out immediately and saw the band playing to some of its biggest audiences ever. The album, which is a proper recording of Mr. Bungle’s much traded, yet unreleased, 1986 demo cassette, has been previewed with singles and videos for “Eracist” and “Raping Your Mind”. Decibel declared the collection “one of the best thrash albums of the year,” Stereogum said “…Mr. Bungle are reliving their very earliest days and kicking a whole lot of ass in the process,” and Brooklyn Vegan dubbed the release simply “badass.”

The Raging Wrath of the Easter Bunny Demo arrives Oct. 30 via IPECAC Recordings.