With Episode 4, “Smells Like Bear,” we have finally reached the pivot point of The Good Lord Bird and the point of no return for John Brown and his band of freedom fighters. For the last two episodes Brown has been a bit sidelined, first by the plot in “A Wicked Plot” and then by the overwhelming presence of Frederick Douglass in “Mr. Fred.” With “Smells Like Bear” though the show finally comes back around again to focusing mostly on Ethan Hawke’s tour de force performance as Brown and his relationship with Joshua Caleb Johnson’s Onion.

The plot continues to follow Onion and Brown as they travel from their Rochester rendezvous with Douglass up into “Gentile Canada.” Of course, this involves jumping from a moving train and hiking out into the wilderness for a couple days, because John Brown absolutely cannot do anything without maximum potential for making Onion uncomfortable. The two of them do seem to have developed a real connection though. It has been obvious from the start of the series that Brown cares, in his own unique way, about Onion. Onion however has always been more opaque about his feelings toward “the old man.” It is clear though that Onion, while he still thinks Brown is sort of crazy, is getting more and more drawn to the cause.

The cause is the basic reason for the Canadian excursion. It seems Douglass taught a reluctant Brown that he needs to give speeches to raise money for his attack plan, so Brown learned how to orate, in the grand Douglassian style, and headed off to make his dream a reality. This gives Ethan Hawke a chance to lean into the Brownian antics with full gusto. After playing the character as somewhat subdued in the presence of Douglass, and Daveed Diggs’s over the top performance, in “Smells Like Bear” Hawke goes all in once more. The show is built around this particular meaty character and the showcase it gives the lead, and even though the expectations were high from the start, he continues to exceed them all.

Brown gives several speeches over the course of the episode. In each of them, Hawke has subtle differences in the performance that show how much or how little Brown has invested in the proceeding. And all of the performances play in contrast to the battlefield speeches we have seen previously. In front of the mostly white audience in the earliest speech, it is clear that Brown’s heart isn’t in it. Even when he gets to his mouth foaming shouts, and the audience starts to lap it up, it is clear that Brown doesn’t quite believe this is the way for him. In the middle speech, in front of a church, Brown has the religious bluster down, obviously, but his even his brandishing of his guns isn’t quite right, because he does not connect to the audience. A man attending this speech is a grifter who has suckered the gullible Brown into thinking he has the guns and resources they need, and he winds up stealing all of the money Brown and Onion have collected. This sends Brown into a fit of despair, briefly, until he has an epiphany about the purpose of these speeches. Later, in front of a mostly Black audience, Brown succeeds for a while in pulling them in and finally hits them with the epiphany he had earlier. He doesn’t need money for his plan to work, he needs supporters.

For a while it seems like those supporters aren’t coming, but after a considerable silence another of the great historical figures of the era steps onto the screen and changes everything for the people involved. Harriett Tubman is a towering historical figure, and in the show “the General” is quite obviously the most esteemed of all the people we have met so far. When she enters a room, no one sits. Zainab Jah joins the ever growing list of women who have played the iconic abolitionist, freedom fighter, and political activist. (A list that thankfully, despite the worst impulses of Hollywood producers, doesn’t include Julia Roberts.) Jah imbues Tubman with an absolute resolution of purpose. And she grants that purpose onto Brown and Onion both. Brown is once again taken into the air of the icon and defers to her as she convinces the room that his cause is noble and that the men there should join with him. But it is Onion in particular who is most moved. He is the one who volunteers first to join Brown’s official army after Tubman speaks after all, it seems that in the presence of the General the Onion can bloom.

Which can also be said of Joshua Caleb Johnson’s increasingly captivating performance. Over the course of the four episodes so far Onion has been a slave, a drunk, a lovesick puppy, a runaway, and now a revolutionary, all while also providing the narration and structure for the story we are watching unravel. In his first couple episodes Johnson was uneasy and unsteady, though that is not exactly a criticism as Onion was definitely just as uneasy and unsteady in those scenes. As time has marched on though, the performance has really gotten more and more nuanced.

In “Mr. Fred” during the penultimate scene in Douglass’s drawing room, Diggs and Johnson basically played a two-handed farce to great effect. They both employed impeccable comedic timing, from the downing of the drinks, to the ushering in and out of Douglass’s paramours, to the discussion of the size of Brown’s army. All of which served to illuminate and contrast to the quieter moments Johnson has been playing as he walked in Brown’s shadow.

When Onion finally tells Brown he wants to actually be free the pain on Hawke’s face is palpable. John Brown does realize the pain he has caused this young “girl” and he immediately sets his mind to making amends, ultimately trying to set Onion up at a convent in the city. As a companion to Brown, Onion has become more and more his own person, finally officially declaring that he wants to forge his own path in this episode. Which Brown encourages, only for Tubman’s magnetic presence to change the narrative and push them back together. Onion is finally making a proactive choice, he is a part of Brown’s team not out of circumstance but out of conviction, and that makes the character and the acting more resonate.

Yet that also leads to the biggest question the show has yet to satisfactorily answer: what is the intended meaning of Onion’s gender bending? There have been some interesting bits of narration about how Onion’s life presenting as a woman is quite different than it would have been if the people saw him as a man, but this has not been the subject of more than one or two scenes. There is a scene in “Smells Like Bear” where Tubman calls Onion out for his apparent decision to wear a dress and present as female.

Issues of gender identity are real and important and it is clear that there is a thematic necessity to the gender story of Onion. There is no indication that Onion actually questions his own gender identity, but it is vital to how he is seen by Brown and others. I just hope that the show continues to explore this question and that they actually give it the time and thought in order to avoid falling into stereotypical “man dressing as a woman” comedic traps.

Kevin Hooks, who also directed “A Wicked Plot,” resumes duties behind the camera and makes really interesting use of the continued tricks like quick cuts to figures facing the camera. Every so often, during the middle of a completely unconnected scene, there will be a quick cut to a lone Black actor standing and looking directly at the camera. These cuts have been present in several episodes so far, but Hooks makes them seem almost like subliminal messages. A silent call for the viewer to remember the real heroes of the story and the reasons that the institution of slavery must fall, as Brown would say, “by blood and fire.”

Tubman’s call to action stirs the room and after Onion agrees to sign up for Brown’s army many others do the same. It is both triumphant and sad and hopefully the show will devote some time to these characters so we will be invested in them when the war they have signed up to fight turns to failure. After the men join, they all travel back to meet with Brown’s sons and the rest of the crew by train, and in another directorial flourish Hooks intersperses the train ride conversation with the meeting back at the farm with Brown’s sons. The scenes cut from questions in one location to answers in another. Then to slight revisions of the same lines said in each location. It gives the impression that everything is interconnected and that the entire story is starting to coalesce on this one event, the battle to start the war and give the slaves the power to free themselves.

So John Brown has his army and reveals his plan. And Tubman issues a warning that he must not deviate from the plan, which is ominous as we already have seen that Brown often changes plans on a whim if he believes it is the will of God. We already know from the show that Douglass will fail to deliver and from real life that the raid on Harper’s Ferry will be a disaster, but this leads to much more Shakespearian level of tragedy. Every step we watch these men take, every time a hand is shaken is a portent of doom. Though it is also true that the raid on Harpers Ferry, Bleeding Kansas, and all the rest of Brown’s rebellions did contribute to the great war he wanted. And the man in the middle of it all is somehow the most unhinged person in the room and at the same time the absolute sanest man on the continent.

Where do we go from here? War, betrayal, death, and hopefully more uproarious comedy, as the second half of the season arrives and Brown, the boys, and Onion descend on Harpers Ferry, Virginia and their dates with destiny.

More From: The Good Lord Bird 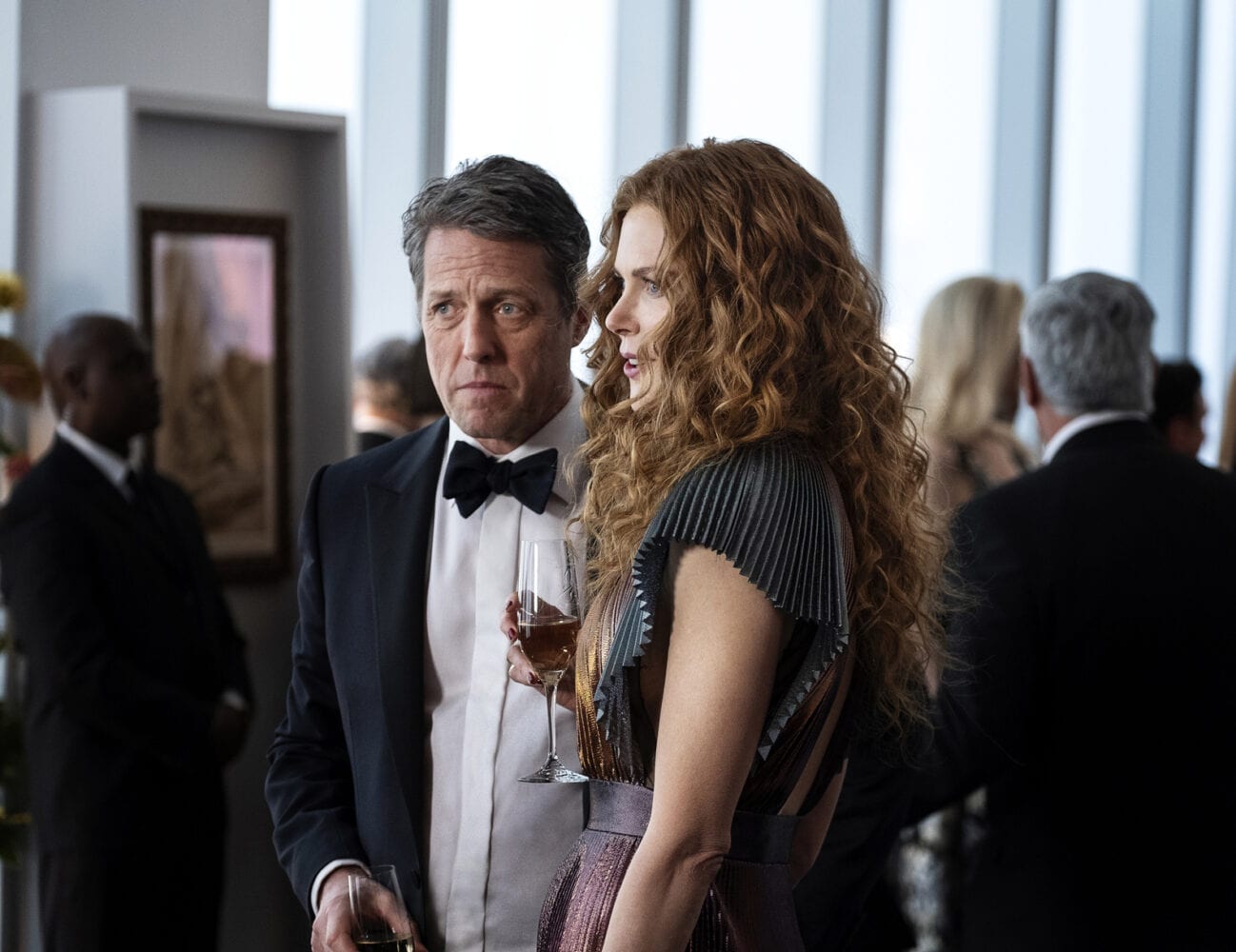