There was a time in my life where I was crippled by shyness. It didn’t matter where I was or who I was with, I would have panic attacks if waiters, waitresses or shop keepers tried to engage me with small talk. Just living day to day with this was a huge struggle but I didn’t recognise it as any kind of disorder until many years later. As a result, I didn’t really have many if any romantic prospects up until the age of 23. Then there came a day when I heard a song called “The Middle” by the band Jimmy Eat World.

This song with its message of hope, living life to the max and taking a chance, wormed its way into my brain one weekend and everything changed. I heard it on a Saturday and by Monday I was a different person. I met someone and suddenly I had a dating life I was excited about. Things were different for me from then onwards, I smiled more, engaged with people and was generally more fun to be around.

Music has always felt powerful to me. That Jimmy Eat World song on that weekend at that period of my life was a temporary fix for a larger issue, but it did push me into a place that I needed to be. I have always used music as a balm for any ailment throughout my life, and I don’t think I am alone there. Music can be used to re-centre yourself after some kind of terrible event. It can be used to change that bad morning into a good one and it can drive groups of people into enacting change. Whenever something tragic occurs, I go back to the music of my youth; to escape, yes, but also to remember who I really am. 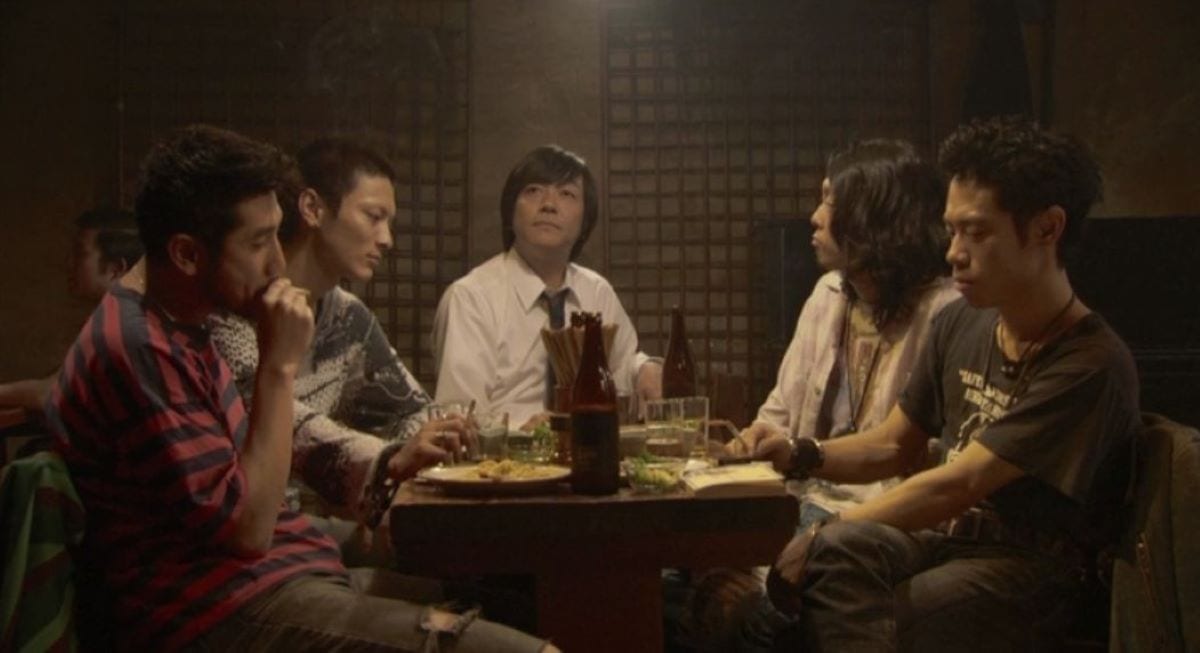 Japanese cinema isn’t really known for its whimsical nature, not in terms of what gets distributed in the west anyway. Mostly what gets noticed by the west in live-action Japanese cinema is the work of Takashi Miike with his horror-inflected Yakuza movies and his more recent reinvention of the Kurosawa Samurai movie. We still get the odd Godzilla movie, but most of their rom coms or lighter fare tends to get overlooked. One such film was the 2009 film Fish Story directed by Yoshihiro Nakamura and based on a novel by Kotaro Isaka.

Fish Story concerns a song recorded by an unsuccessful punk band in the ’70s which then has an effect on a person that then ripples through pivotal events in our world and eventually saves us all. It is essentially Cloud Atlas (2012) if it was written by Johnny Rotten. We ping pong between various points over 37 years in a non-linear fashion, starting in 2012 and then peeking back at regular intervals to see how it all falls into place. In 1975, at the birth of punk, a band works through their issues against all the odds and debates whether or not to record the song in the first place. A few years later a shy driver debates whether or not to stand up to his misogynistic boss. Then later, a teenager falls asleep onboard a ferry and finds herself in the middle of a terrorist hijacking. Then finally in 2012, as a comet heads towards the earth and the end is nigh, a few music fans gather in a record store to reevaluate their hopes and fears.

In our current world, we tend to think very narrowly about any impact we are having. We think mainly about our social media profiles and what a great looking selfie might do to those we went to school with. Those of us who create for a living are thinking about our viewing stats, our downloads and our sales figures. We don’t really think much anymore in terms of legacy, we don’t think about the butterfly effect and what us flapping our wings does to that random lonely young person on the other side of the world. Fish Story is refreshing in this respect, it feels like a reminder of how we need to think bigger, wider and consider how what we do affects the wider world even if it doesn’t feel like it makes a difference at the time. 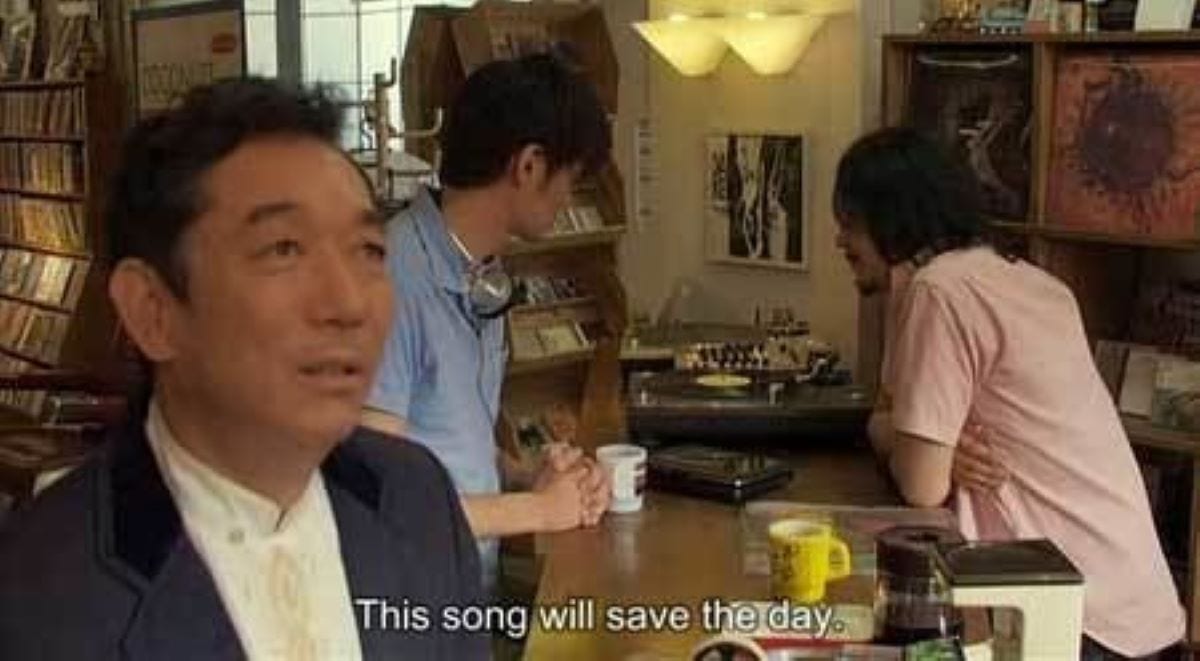 The film presents us with a series of interesting characters with the Fish Story song making appearances on radios and turntables throughout. The plotting doesn’t really sketch out right away how the song is going to save the world, and part of the joy of the film is watching this play out and wondering how it will all fit together. When it finally kicks in, with a meek driver saving someone from rape whom he then marries which then ripples all the way through to 2012 and the end of the world, the result is one of those fist-pumping triumph moments all too rare in our modern world.

This story is an important reminder to all of us who create art in one form or another. A reminder that thanks to technology being what it is now, everything you create will be around in one form or another for a very long time. Back in 1975, a punk band records a throwaway track on to vinyl, with no knowledge that forty years later vinyl would be a big business again. Thanks to these kinds of trends, films and music are being rediscovered all of the time. Our society revolves so much around media that it is possible something as innocuous as a two-minute punk song could affect major world change. Back in 2003, for better or worse, the people who invented something silly called Facebook probably didn’t realise where we would be now as a society, but here we are.

A major drawback to Fish Story is a problem that has plagued many Japanese films since the late ’90s. Probably more for issues of the budget rather than anything else, but a great deal of the films we get to see in the west often look cheap and like they are filmed on TV standard cameras. Fish Story is sadly one of these films. The scope is there, there are wide shots of horizons, wide-open roads, deserted suburbs and beaches, and yet the film’s aesthetic is on the lower end of the scale which robs the film of some of its intended impact. Having said that, when a film is more about plotting and life-affirming poetry, it matters less how that story looks. 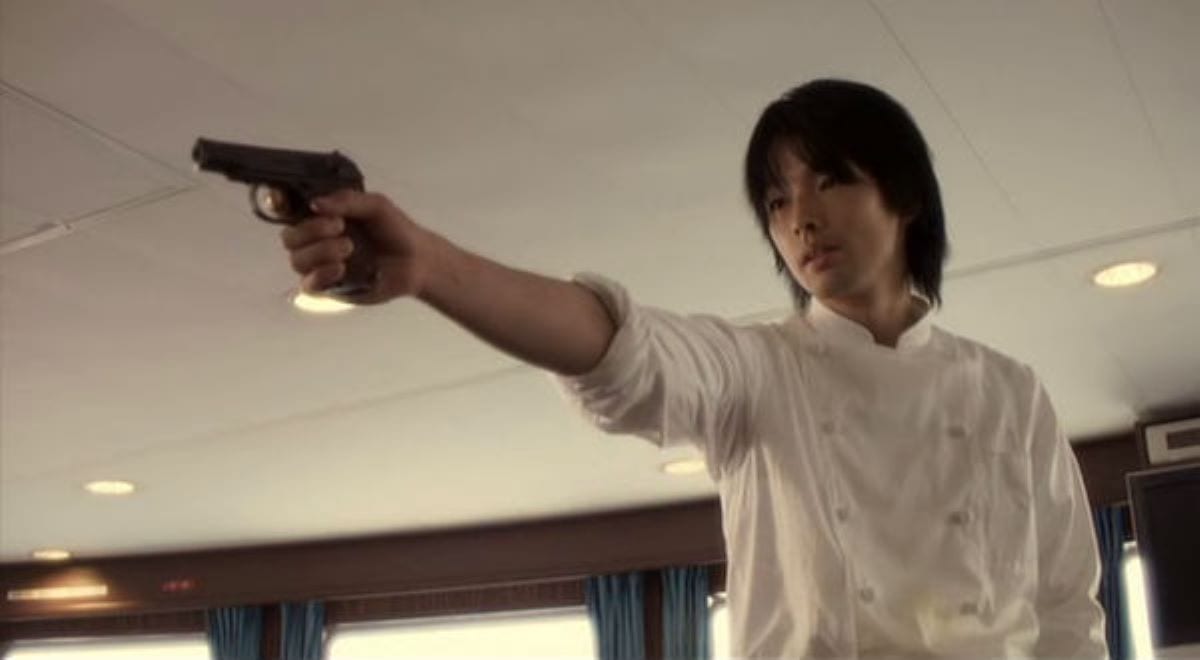 Despite proving popular with the film festival crowd at the turn of the decade, Fish Story remains relatively unknown in the west. It received a release from a now-defunct distribution company but can still be found on DVD if you look hard enough. It is a film with a great message about connection and inspiration, and should really find a wider audience despite its flaws.

Ultimately Fish Story is a film with a wide-eyed and clear philosophy of the world. It is a film that says that art exists for a reason and that art often inspires others into action and in turn creating their own artwork for the world. It is a story about very epic things such as the fate of humanity and yet, it all starts with the little guy, that shy, awkward person who has it within them to actually change the universe. All they need is that push, and that could well come from you.