‘The American President Has Bite in Its Pearly White Teeth’ is now available on Audio, read by author Don Shanahan, exclusively for our Patreon supporters. For just $3 a month you will have access to our full library of Audio content, plus three new uploads every week. To sign up visit our Patreon page: https://www.patreon.com/25YL

When I watch Rob Reiner’s The American President in a year like this one (and plenty of others since 1995), I often sit back and bemoan: “Gosh, couldn’t we get a President like that?!” Just look at Michael Douglas’s Andrew Shepherd. I want that guy in my life, on my Twitter feed, and gracing our future Social Studies textbooks. He’s endearing and cocksure in equal measures. He’s bold and forthright while being prudent about the battles he chooses. I know it’s Hollywood gloss, but wouldn’t it be something to have a beacon of composure and conviction coming from the top office of the executive branch in the nonfictional White House?

The American President offers that kind of stirring viewing experience 25 years later, especially as we approach an exhausting and contemptuous election. It’s a case where manufactured stature feels more satisfying than a forced one here in reality. Like many of the stellar film and TV characters that have run through 25YL’s recent tournament to crown the best fake president ever, a smooth operator like Andrew Shepherd feels like a jolt of rousing oxygen in a polluted fog. He may have lost to Veep’s Selina Meyer in our tournament, but the man is a winner-and-a-half here.

What makes both Douglas’s president and the movie itself victorious classics is the combination of edge and enchantment. The loveliness of the surroundings and circumstances staged by Rob Reiner is spiked by the sharp words of writer Aaron Sorkin. Billed and cherished as a rom-com, The American President has plenty of bite to its pearly white teeth.

For those light on the nostalgic accuracy, the movie takes us into an election year for the widowed and single father commander-in-chief from Wisconsin. Andrew Shepherd is riding high carrying a 63% approval rating, as touted by his proud inner circle led by chief of staff A.J. MacInerney (Martin Sheen) and top assistant Lewis Rothschild (Michael J. Fox). He is eager to pass substantial crime legislation before the State of the Union address as a signature accomplishment bolstering his reelection bid. At the same time, there is an ambitious environmental bill soon to cross his desk angling for a dramatic reduction of fossil fuels that cause global warming. 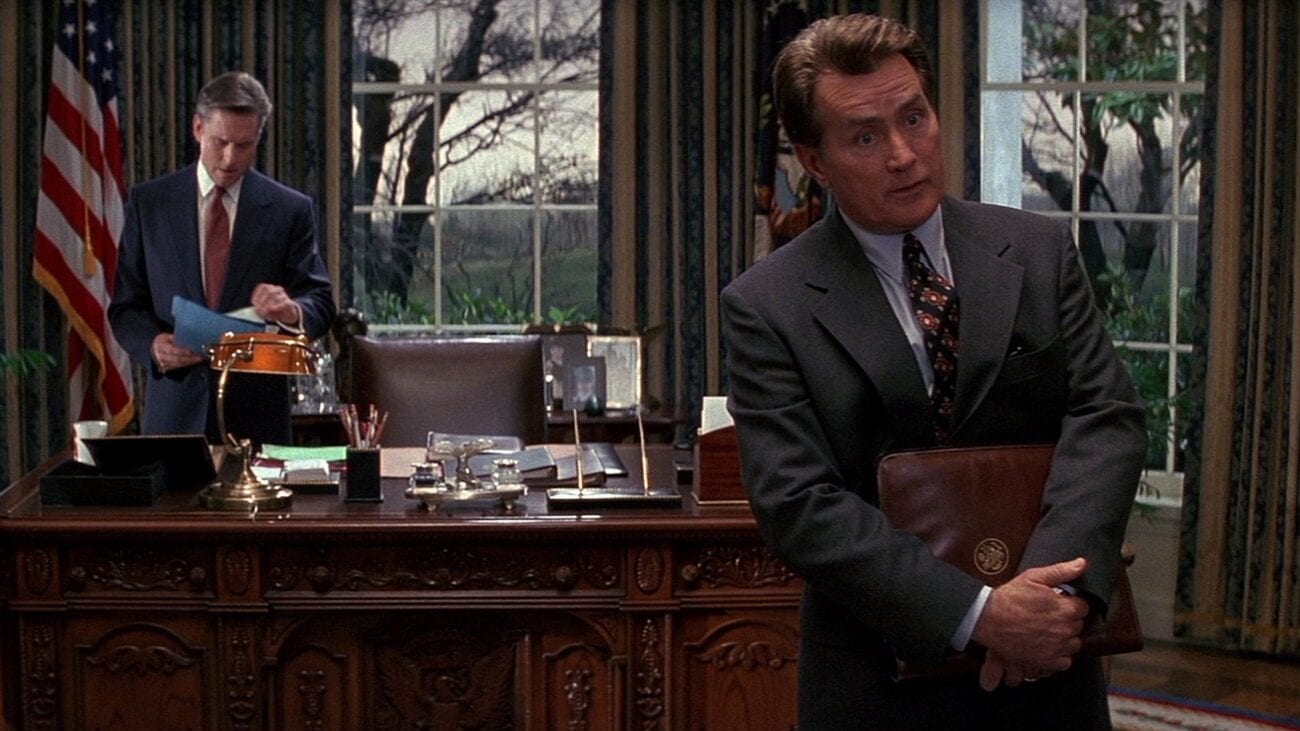 One of the lead strategists on that initiative is liberal lobbyist Sidney Ellen Wade, played by four-time Oscar winner Annette Bening. With her own highfalutin confidence that occasionally gets her mouth overflowing with diatribe trouble, Sidney catches the eye of the president. Shepherd would love to ask her out on a good old-fashioned date, one that just happens to be a state dinner for the president of France with flashbulbs and press everywhere.

Looming as the conservative public mouthpiece to call everything into question is Republican senator and presidential candidate Bob Rumson, embodied with just enough sleaze by Academy Award winner Richard Dreyfus. He incites the media and tabloids to make this all a scandalous character debate, framing Shepherd as a gallivanting playboy and Wade as an insidious political plant. Much to the chagrin of his loyal staff, Shepherd will not publicly engage in such hammy bullying targeting his personal life, yet his poll numbers start to slip due to the perceived scandal.

Courting for a commoner is hard enough. Doing so as the face of a nation creates quite an adorable challenge. The American President saunters through the sociopolitical pitfalls of work-life balance for all involved. That dance is, again, the edge and enchantment of this movie—the charm and conceit of this movie.

Let’s start with the charm. As a romance, this movie glides like the waltz shared by the couple at that state dinner. The ornate production design from two-time Oscar nominee Lilly Kilvert (The Last Samurai, Legends of the Fall) is sumptuous in every reproduced colonial detail. She shadowed director Rob Reiner in five visits to the Clinton White House to devise her prim and proper interiors. Her Oval Office set would go on to be used on the Warner Bros. lot on Dave and The West Wing. Cinematographer John Seale (The English Patient) makes sure to give everything a wide berth and the right glow.

The proceedings are given additional sweep by Mark Shaiman’s forthright musical score. Coming on strong from the get-go in orchestrating an opening credits stroll through White House memorabilia and art, Shaiman’s work exudes the perfect level of lovely patriotism. His work was the film’s one Oscar nomination that year. We wouldn’t have that moving Saving Private Ryan trailer three years later or the queue-loop wait music at Soarin’ Over California in Disney’s California Adventure without it. 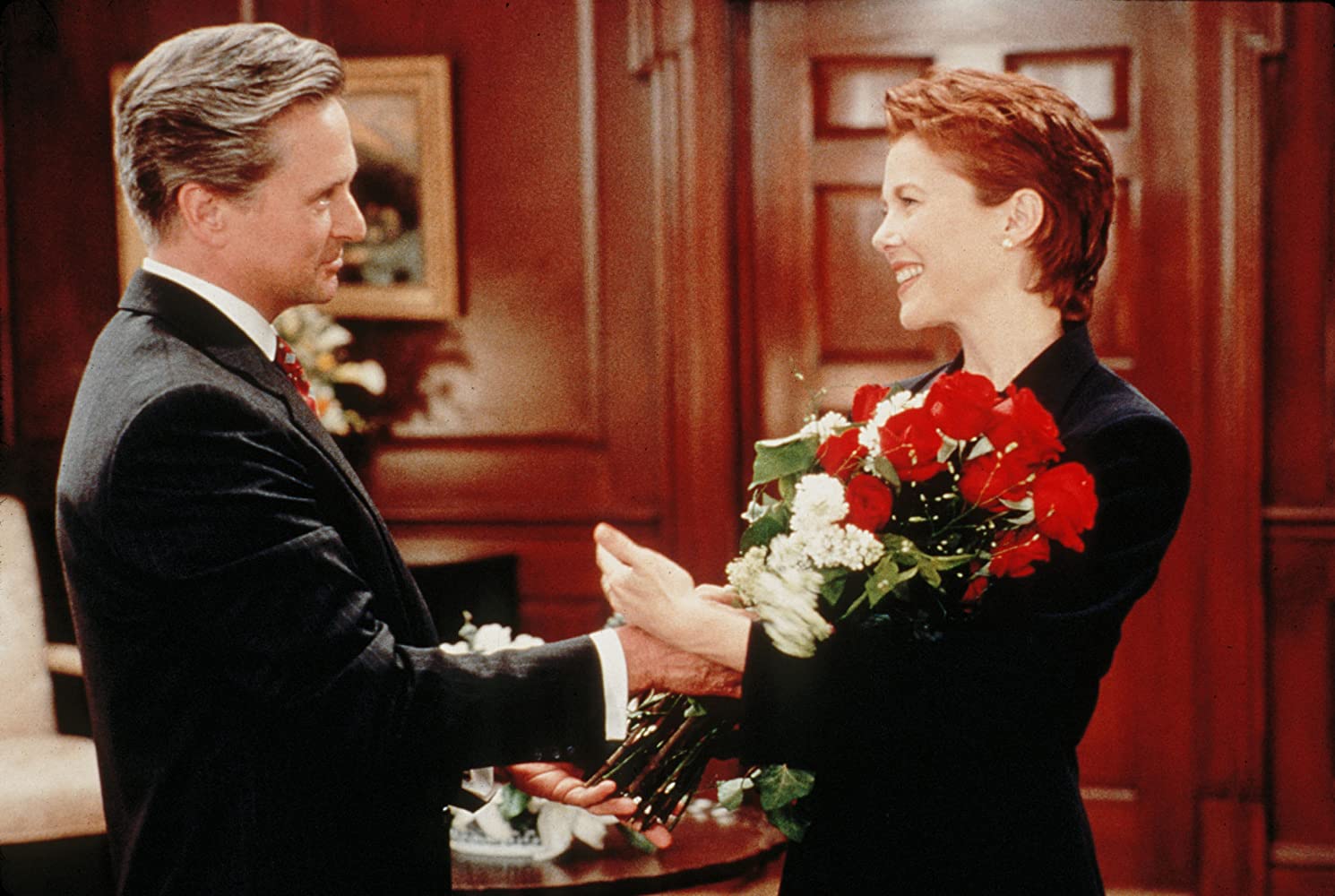 As a will-they-won’t-they duo, Douglas and Bening are an ideal match, even if Douglas is 14 years older. We’ve seen far worse May-December pairings. Acting embarrassment and fetching frazzle with a smile is whiffle ball for Bening. The delightful surprise is Douglas lightening up during his hot 1990s run—his three films before The American President were Basic Instinct, Falling Down, and Disclosure. Talk about a palette cleanser. This felt like a role his father Kirk would have done 40 years prior, and it suits his son well. Joining them is one of the best ensemble casts of its decade, from Sheen’s unofficial West Wing audition (shared by 11 other future TV cast members from this movie) to Fox’s ever-present snappy retorts and steady hands like David Paymer and Anna Deveare Smith mixed in.

The edge is the conceit to be meaningful and not just whimsy. It’s what this acting team was allowed to say and do beyond the lovey-dovey prance. For example, three F-bombs are dropped in this PG-13 date movie, a ratings rarity. That’s all Sorkin. Reteaming with Reiner (rebounded from his reviled North) after the smash success of A Few Good Men, this was a 180 from the tone of that courtroom grilling session. The American President was Sorkin’s third screenplay, years before he honed his legendary Sorkinism status in the arena of television before returning to higher-end film over the last decade. 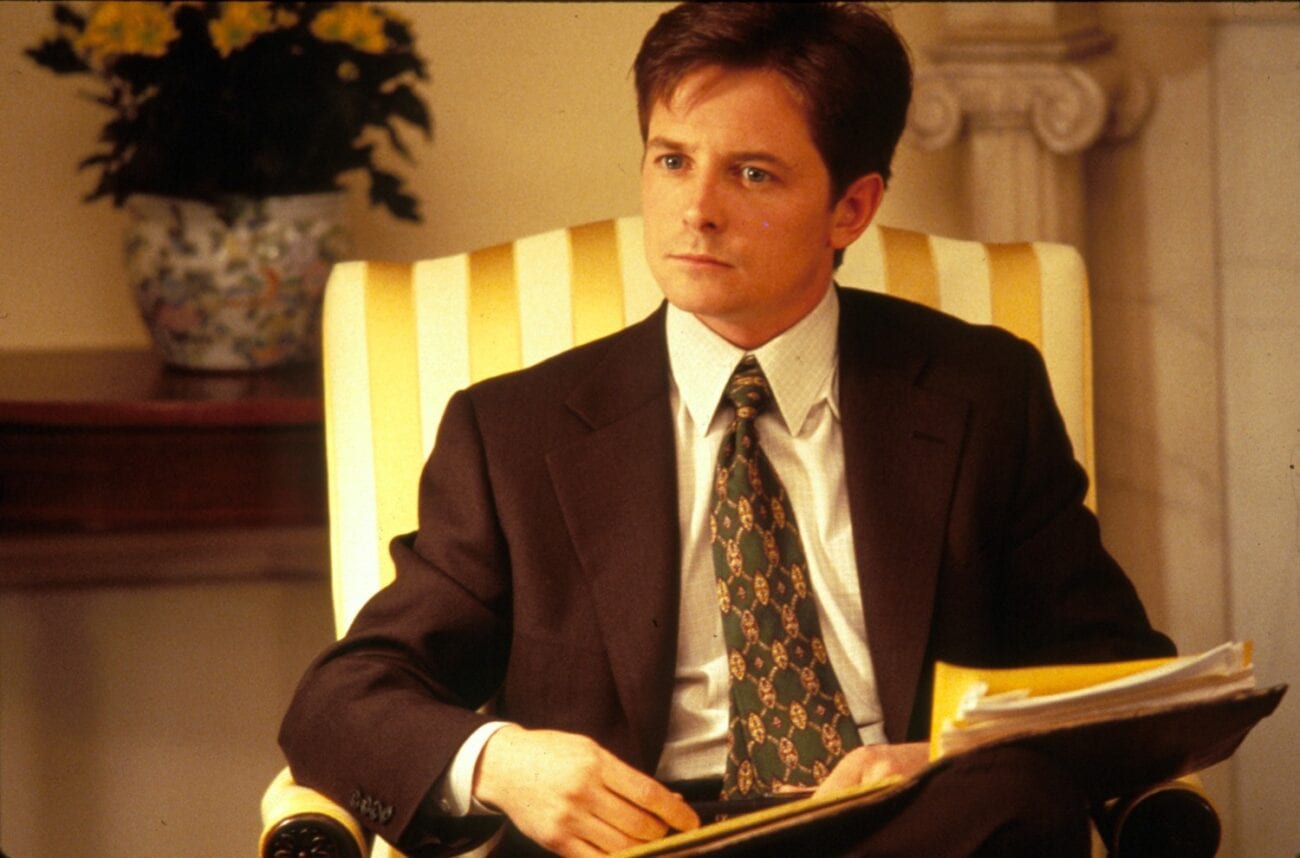 There is evocative eloquence in both the plot and dialogue written, beginning with the politics. Considering how the issues of global warming, media bias, and gun control are still prevalent (and more concerning) today, we can look back at their thought-provoking prominence in The American President as both heady material ahead of its time and echoes of missed societal opportunities. It stands, 25 years later, as one of the best presidential movies you’ll see, even if the eye-rolling conservatives out there just label it liberal Hollywood dreamscape shouting and showing-off.

Let them moan, because the dialogue is never afraid to challenge principles. There are stump moments of temerity that stand out. Some are small single lines like “politics is perception,” “fight the fights that need fighting,” and “the American people have a funny way on their own of deciding what is or is not their business” from Sheen’s supporting heft. Later, Fox’s courage-questioning “in the absence of leadership” monologue has ball-busting power to push Douglas’s buttons. The absolute best is the finale speech from Michael that stands as a takedown for the ages. 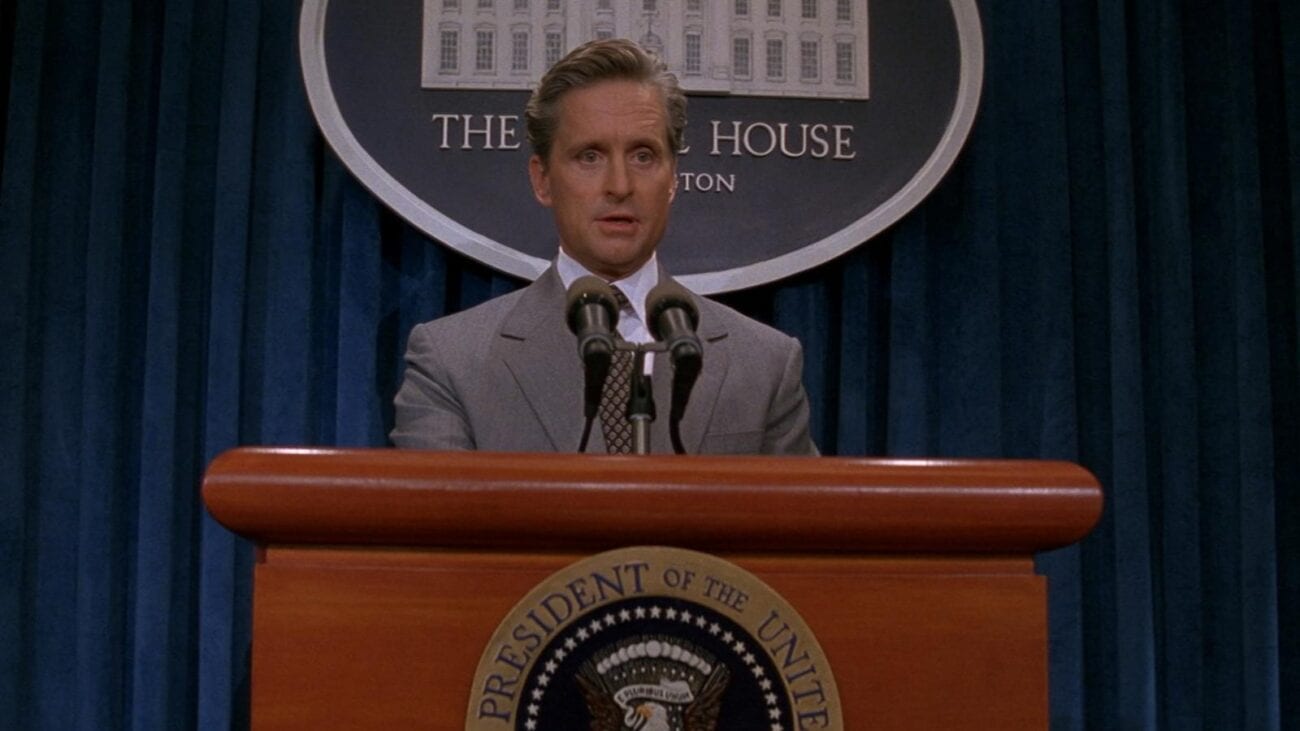 All the while, enchantment still wins through Sorkin. You won’t find many silver-screen meet-cutes that culminate with a line-rattling laugh like, “Let’s take him out back and beat the s–t out of him” after the leading man listens to his attractive guest unknowingly belittle him in his presence. First impressions are hilarious, and that’s a great one. Follow that with exchanged compliments, a fun “Organization of the United Brotherhood of It’s None of Your Damn Business,” and then the “most powerful man in the world” pre-sex talk, and Sorkin’s zingers serve the romantic aim just as good as the flag-waving one.

There is a balance of pep and patience in both halves of the movie’s tone. The American President is constantly self-aware at every turn. Bening later asks, “How do you have patience with Americans who clearly don’t love America?” One answer is easy: Watch a movie like this and fall in love with your country and its winning potential again, even if it’s a date-movie time capsule.