The election is finally here so it is time to look back at television’s best campaign parodies and ask ourselves: does Frisky Dingo understand American politics better than more serious shows like The West Wing? During a time when Americans were understandably disaffected from mainstream politics, Frisky Dingo gleefully imagined a presidential race between two out-of-touch selfish elites—one a trust-fund brat with too many toys and the other a giant naked white mutant.

Frisky Dingo was created by Adult Swim veteran Adam Reed following Sealab 2021 and briefly aired for two seasons beginning in fall 2006. It wrapped up in the spring of 2008, just as another presidential campaign season was heating up. Frisky Dingo departed from the Hannah Barbara remix format seen on Sealab and Space Ghost: Coast to Coast for a visual style most viewers now would probably recognize from Archer, another of Reed’s creations that is now going on its eleventh season. The series introduces Killface, an alien bent on global destruction via his “annihilatrix,” an expensive machine that will thrust the Earth directly into the Sun. His timing is perfect for Xander Crews, a billionaire who moonlights as the superhero Awesome-X, who needs a new supervillain to sign away the rights to their likeness for a new line of action figures.

It’s hard to believe in 2020 but the political climate during the latter half of the Bush years was also pretty insane. The lead-up to the Iraq War was a disorienting mass indoctrination that relied on institutional trust to perpetuate a disinformation campaign. Alternatively, the media landscape was still predominantly advertiser-driven cable television, the most subversive of which was found during the late-night scheduling of The Cartoon Network. Of course, Adult Swim hardly needs any introduction, but I’m sure there is a lot to unpack from an anthropological point of view that the most radical edge of art and comedy aired late at night on a network otherwise dedicated to children’s programming.

The first season of Frisky Dingo is mostly a hilarious inversion of the superhero genre, but the entire season also works as a set-up to the big joke of the second season where Killface accidentally stops global warming and uses the notoriety to launch a presidential campaign. Launching a bid for President as a vanity project certainly wasn’t unheard of, but once again there are no such ego-maniacs in the very serious Sorkin-verse, and yet Frisky Dingo isn’t just full of them, it rightly identifies that narcissism, not altruism, is a bigger factor in political personalities than we’d like to think. We take the idea of “branding” our individualities for a competitive market for granted now, but at the time the concept was ridiculed as a myopic pastime of billionaires like Xander Crews.

This isn’t to say that Frisky Dingo is a smart show, because it certainly isn’t trying to teach us anything. Even then, during a high point of the Adult Swim lineup, Frisky Dingo felt a bit like a relic—an attempt at a normal kind of TV show, with a plot and somewhat coherent universe, instead of surreal sketches and psychedelic experiments. It is more akin to a sitcom, although perhaps the first that begins with a homicidal mutant announcing his plan to destroy the world. Therein lies the comedy, as Frisky Dingo more or less centers around Killface’s quest for global domination thwarted by the minutiae of running a supervillain enterprise.

The candidates represent the collision of chaotic forces in American politics. It’s kind of fun imagining Killface as a metaphor for the dormant beast of white supremacy suddenly waking up to its demagogue potential, but equally disturbing is the sheer amount of material power held by Crews and his corporate board of identical old men (“harumph!”). The show wisely examines and questions the role of advertising in both media and politics, and the conflict of interests in capital, advertising, and the political industrial complex. And worst of all, it portrays the dismal disregard for the lives of marginalized communities and workers. Killface even begins his plan for global domination as a mailer, not unlike real political careers. 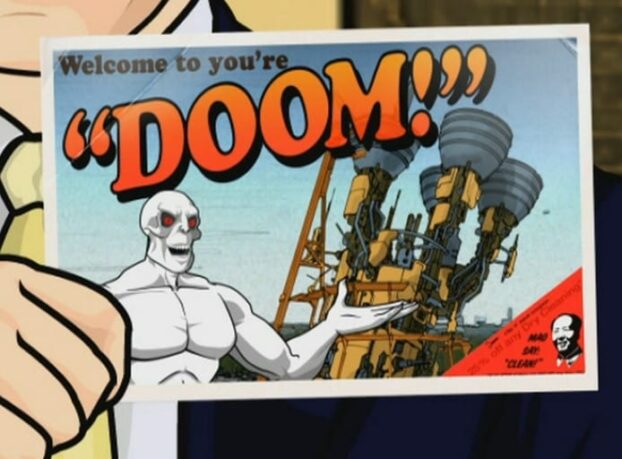 Political satire was, how shall we put this, in a state during the latter half of the Bush era. Speaking truth to power did not bring accountability to war criminals, as much as Daily Show viewers wanted to believe during the mind-numbing disinformation campaign of the Iraq War. Satire in those days felt like a lost battle in an already meaningless war. Resistance to the status quo was instead experienced through a new sincerity—a term used to describe the anti-cynicism that arose in response to the punk ethos—that might best be exemplified by Aaron Sorkin’s The West Wing. Far from a work of satire, it was an experiment in American liberal fantasy, a meditation on the possibilities of a functioning American executive branch that hedged its bets entirely around the premise that the institutions of the republic are held sacred by those entrusted to uphold them.

But in order for that logic to work, Sorkin had to create a fantasy government staffed by overachieving personalities completely lacking selfishness in favor of their committed ideological function in the governing machine. In other words, they are characters limited by their constructs attempting to patch over the flaws in our system. Frisky Dingo is full of caricatures, grotesque magnifications of the very real flaws, albeit tossed together haphazardly, but nonetheless more honest in its portrayal of how most Americans felt about the state of democracy; a pastime of the uber-privileged and literal monsters.

This isn’t just limited to the show’s top assholes. There are few truly likeable characters in Frisky Dingo, but the closest they get to humanity is the genuinely compassionate camaraderie and model masculinity shown between the Xtacles, although hidden behind identical helmets that randomly self-destruct. The Xtacles’ humanity is paired with their disposability. In contrast, the women of Frisky Dingo turn into their own kind of supervillains in response to the cold misogynistic behavior of Killface and Crews.

There’s also the personality of Wendell, who kind of dominates the episodes with quotable lines, but is also darkly nihilistic and incompetent. Wendell isn’t law enforcement per se, in fact it’s questionable whether he’s credentialed for anything, but I think what’s actually funny is that he is one of the truest embodiments of evil portrayed in the media. He is corrupt not necessarily out of malice, but out of a combination of jagged machismo and survival instinct.

Don’t get me wrong. I like shows like The West Wing, and obviously there’s a much bigger difference in what Sorkin meant to portray than what the team behind Frisky Dingo was going for. But Frisky Dingo dares to question the legitimacy of power as well as the intentions of the people who seek it, magnifying the dystopian connections between ambition, marketing, and populism. But it’s also limited to those paradigms. Importantly, where Frisky Dingo is furthest from reality is its imagination of a population that is unresponsive to authoritarians, and yet it depicts a brief period of time, before Occupy, before Black Lives Matter, when it looked like the reigns of power were truly only in the hands of inhuman monsters.