In one glorious week back in April 2019, I went to a couple of gigs that literally blew my mind.  Fontaines D.C. at King Tuts in Glasgow two days after their debut, Dogrel, was released, and the Press Club gig at Sneaky Pete’s in Edinburgh. 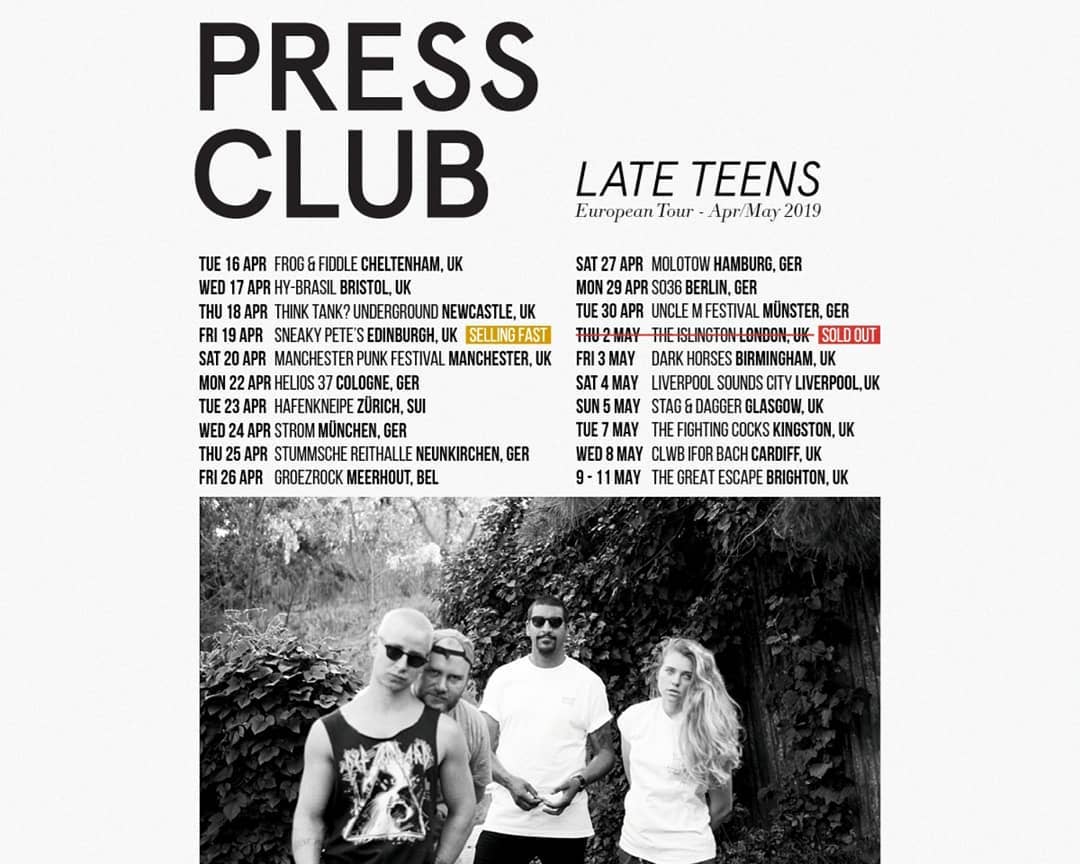 I had no plans for the Friday of that Easter weekend until Nick Stewart of Sneaky Petes would put a full description of the bands on the venue website. I liked the sound of Press Club and listened to their debut album Late Teens, and I couldn’t believe what I was hearing. It was an immediate reaction, and just one hearing was all it took to buy a ticket. It was a sell-out but the day had been a scorcher and I suspect some decided to stay outdoors, what a gig they missed, but they did us a favour because the gig felt even more intimate than usual.

Now I have a rep for hugging the bands in Sneaky Petes but it is usually AFTER the gig with the adrenalin pumping. This time I hugged lead singer Natalie BEFORE they went on stage! Press Club had travelled from Melbourne, there were two other bands on that night and the price of a ticket was £8. The least I could do was give her a hug and buy a tee.

The supports were two local bands, Nasari (synthesized indie) and Puppy Fat (half an hour of indie pop-rock)—did I mention £8 a ticket.

But boy was I excited when Press Club came on. This was their first headline gig in Scotland.  Natalie is a diminutive fireball, a whirlwind of energy and a powerful singer. This is indie punk rock if there is such a thing. You imagine their influences come from the likes of AC/DC but its Natalie’s vocals that make this band stand out. The power and control are extraordinary. And then there is her energy. There is no mic stand. She is all over the tiny stage, on the floor, into the audience, headbanging, a mic stand would just get in the way. The songs are about life, love and relationships, but in amongst such raw music, they simply grab you by the guts. Iain Macrae on bass, Frank Lees on drums and Greg Rietwyk on guitar make up the rest of the band and they are one tight unit.

So this tour was in support of their debut album Late Teens. Most of the songs are 3-minute blasts of exuberance. “Ignorance” is a heart-wrenching description of innocence. “My Body’s Changing” has my favourite lyrics “I can’t be arsed with you right now”. I have to admit it was also a bit of a ‘girls down the front’ kinda night. Another girl and I were the two who sang and jumped around to every song. “Headwreck” does have the line “Don’t be that guy” which we were screaming at the tops of our voices. The blokes in the crowd took a little longer to get going but by the end, we were all freaking out to the joy that is the music of Press Club.

The last song was “Surburbia” which has a gentle introduction, but let’s remember this is Press Club. Its slowly winds up and its rousing chorus has the whole crowd singing as one.

Of course there was chanting for an encore and what a treat, a cover of the Buzzcocks “Ever Fallen In Love” delivered Press Club style.

And then it was over. I was exhausted and emotional by the end of this gig—the power of music and how it can move you. I chatted to the bassist at the end and thanked him for one electrifying night.

Oh and I hugged Natalie again on my way out…