It’s impossible to be perfect in everything you do. Perfection, like beauty, is in the eye of the beholder. Undeniable perfection cannot be reached in art, but if someone takes a look at it and thinks it is, then in their little facet of reality, it is. Don Hertzfeldt’s work is my idea of perfection.

Today, I’m going to take you on a little tour of his career, spanning from his time as a student in the mid-1990s to today with the release of his most recent addition to the World of Tomorrow series. I hope you enjoy this trip down the halls of my favorite director’s works of art. 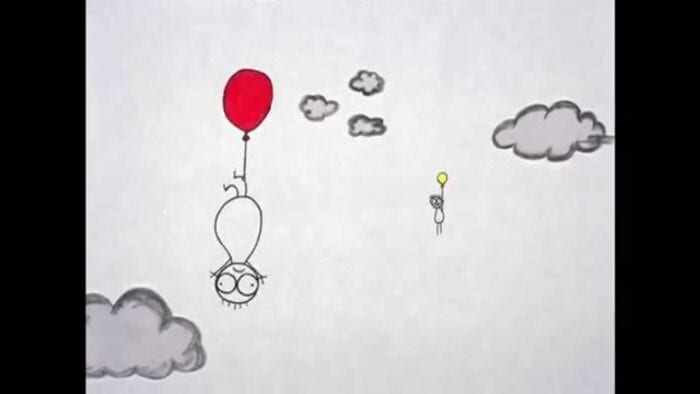 Don Hertzfeldt began his career as a film student in the year 1995 with the two-minute short Ah, L’Amour, wherein a man is physically harmed each time he tries to ask a woman out on a date. I admit this is one of the few works of his I haven’t seen, as it is rather hard to dig up. But even just in the description, I can see his signature dark humor peeking through. The following year, he creates Genre, a five-minute short wherein a cartoon rabbit is depicted summarizing the many genres of film. It is juvenile, very symptomatic of his youth, but is also delightfully dark and silly, an enthusiastic warning of what was to come.

Over the next two years, Lily and Jim and Billy’s Balloon would be born. The first is a slow comedy about the inner thoughts of two people on a first date with one another, the second a wordless tale of a violent balloon uprising. Lily and Jim showcases the creator’s wicked wit while Billy’s Balloon gives us his full-throttle dark comedy style.

Between these four works, we get a good taste of what Don Hertzfeldt is all about, which is a dedication to marvelous simplistic art and a unique sense of humor. It isn’t until 2000, though, that he gets his first ticket to the spotlight.

I’m sure many of you have seen the Oscar-nominated short film REJECTED, which showcases a handful of rejected commercials for a family channel. “My spoon is too big!”, “my anus is bleeding!”, “I am the Queen of France!” should all be enough to jog your memory. Whether or not you knew Hertzfeldt was the name attached is up in the air, but what’s for sure is you see now that REJECTED is a grand combination of all his previous vibes and ideas. A lovely collage of kooky and creative shorts, it’s truly timeless, but it isn’t my favorite of his. We’ll get to that.

There’s a three-year gap leading up to The Animation Show, a mock theater presentation sort of thing that goes over the many wonders of animation. This, of course, is a wonderful concept for Hertzfeldt to exhibit more of his brilliant style of random humor. It’s absolutely bonkers but does not prepare you for the first dose of his surrealism.

In 2005, we get The Meaning of Life, a peculiar 12-minute short showing us Don’s idea of evolution over the next billion or so years of Earth. It is shamelessly odd and off-beat, giving us a taste of the things he had in store for the next five years. Grand orchestral music leads us through galactic windows and the daily lives of peculiar little monsters. This is pure Hertzfeldt-brand surrealism.

This is accompanied by Watching Grass Grow, a documentation of his work process in creating The Meaning of Life. It runs the same length as the cosmic short and shows just how dedicated and hardworking he is. It’s an incredible feat he accomplishes each time he creates, bringing his little stick-people and creatures to life in ways that touch me more than any live-action feature film I’ve ever seen.

2006 brings the first half of my favorite film. Everything will be Ok follows Bill, a man navigating life through his cancer treatment and plethora of mental conditions. Hertzfeldt uses his driest of dry wit, delivering gags that hit like a static shock in amongst countless thought-provoking and dreary depictions of what it’s like to live as Bill does, and what it’s like to live at all. Two years later, the second short in Bill’s chronicles, I Am So Proud of You, is gifted to the public. Perhaps my favorite chapter in the story, it mostly takes us on a tour of Bill’s past and his utterly insane family history. Equally as sharp and enthralling as Everything will be Ok, it’s still only the middle.

There’s a little break leading up to Bill’s final chapter in the form of Wisdom Teeth, a short about a man asking to pull out his buddy’s wisdom teeth removal stitches. This, obviously, leads to a whole baby being yanked from the man’s mouth. It’s after this little work of nightmare comedy that we get the final piece to the puzzle of my favorite movie of all time.

It’s Such A Beautiful Day is the 2011 short that completes the feature film of the same name, which would be released the following year. This final segment ties Bill’s arc into a beautiful bow, encapsulating a gift filled to the brim with powerful feeling, stunning art, and gut-punch humor. I first saw the full feature in 2016, having no idea what I was in for, but what I got was the thing that truly ignited my love for movies and our relationships with them. It’s influenced the way I think, the way I write, and I’m confident in saying it’s a large part of why I’m here now, doing this.

An adoration for the many odd beauties of life is etched into the design of this entire film. While it may be a tad melancholy and it’s very likely that some of what we’re shown isn’t even “real”, there’s still a deep appreciation for being alive and the things Bill sees. Hallucination or physical, nothing we are shown goes unloved.

While the ideas of this film are generally broad, one of its central themes is undeniably memory. Bill struggles to retain his memories due to side effects of his cancer treatment, or perhaps Alzheimer’s or dementia (maybe even a combination). As someone with multiple family members lost to these conditions, Beautiful Day’s portrayal of them really strikes a chord.

Nowadays when I watch this movie, I’m reminded of my great uncle who passed away just this year. When he was still around, when you’d ask him “how are you?” he’d reply, “I’m number one”, but hold up two fingers. When my mother visited him around a year ago, at a point in the progression of his Alzheimer’s where most people saw him as a shell of a human, she asked him: “are you number one?”, holding up two fingers, and he smiled. Fragments of people, peeking through the heavy curtain of memory loss. It is an equally heartbreaking and heartwarming idea, and seeing such a thing presented so lovingly in this piece of animation brings a very special, happy feeling to me.

I could go on and on about all the things I love about this movie. It is, after all, the little details in each scene that I like most. But I’ll spare you for now, because it’s time to move on to Hertzfeldt’s next adventures!

2015 sees the director’s second Oscar-nominated work, World of Tomorrow. It follows Emily, a little girl who gets a visit from her future self. Future Emily takes her on an adventure through the technologies, woes, and wonders of the distant future. Much like Beautiful Day, it is darkly funny, heartbreaking, and stunning in every sense of the word. I recall seeing it in an old-town theater in my general area, the last shown in a collection of animated shorts. At that point I had seen it already, and boy, did I feel smug when it was the one that got the most laughs out of the audience. I try not to be terribly pretentious when it comes to movies, but hey, I’m only human!

In 2017, its sequel, World of Tomorrow: The Burden of Other People’s Thoughts was released. It depicts little Emily visited by yet another future version of herself, the sixth “backup clone” in a series. We follow them on a journey of Emily Six’s mind, through her inherited memories and broken dreams. Her melancholy existence contrast with “Emily Prime’s” childlike wonder and caring nature makes for a heart-clutchingly sweet experience. Much like Beautiful Day yet again, it features a strong emphasis on memory.

This all brings us to today, with the recently released World of Tomorrow: The Absent Destinations of David Prime. A much different feel than the previous two, this third installment takes us on an trip through the complexities of time travel as David, Emily’s husband, discovers he must prevent one of his future clones’ murder at the hands of one of his backup clones. It is complex and goofy, clearly playing on convoluted time travel plots from many a sci-fi tale. World of Tomorrow has always been a science fiction story, and Hertzfeldt really goes to town on that aspect in this most recent addition.

It’s become clear that World of Tomorrow is following in the footsteps of It’s Such A Beautiful Day, and will eventually release as a full feature. As of right now, we aren’t sure just when this will come to fruition, only that it’s not quite yet—Don Hertzfeldt has stated on Twitter that World will have more than three entries. I, for one, am excessively excited to be watching this lovely story unfold over time, and can’t wait for more.

This man’s work has shaped my life in unfathomable ways. His expressions of the bountiful feeling of existence are blunt, raw, and teeming with adoration for the human experience in all its sappy glory. These stories are built out of love, and it pours from every detail. All the pain and healing, shadows and shiny spots, the best of us is present in these simplistic but powerful works of animation.

Human beings are fantastic and terrible creatures; our own worst enemies, our own best friends. Don Hertzfeldt’s work, specifically his more recent adventures, portrays all of us in a most gentle and kind way, and he’s not done with us yet. I’m glad we are all alive at the same time to watch it happen.

Emma Gilbert is a 21-year-old from North Carolina who has had a special interest in horror films since she was 14. She's been writing since she was 10 years old, encouraged by her family and friends all the way. Here, she hopes to entertain and enthrall you with trainwreck analyses and lame humor!