More than a decade before the Marvel Cinematic Universe, the DC Animated Universe produced a groundbreaking and successful shared universe with some of the greatest animated series of all time. I loved several of the shows in the DCAU while I was growing up—Batman: The Animated Series, Superman: The Animated Series, Batman Beyond, Static Shock, and Justice League—but I was (and still am) always bad at finishing shows, so I didn’t watch most of those series all the way through until I was an adult. One of the final products of the DCAU was Justice League, and it was one of my absolute favorite shows growing up. When Justice League transitioned to Justice League Unlimited, expanding its scope and character roster, I thought that the result was fine but definitely a step back from the fascinating, well-written, and sophisticated original series. I never got around to watching beyond the first season of JLU until I was an adult, but when I finally got around to finishing the series, I was absolutely blown away by the series’s nearly flawless Season 2 as well as the Season 3 (and series) finale, “Destroyer,” which concluded the DCAU and is maybe the best episode in the entire continuity.

JLU’s final season picks up a short time after the events of the equally fantastic and exhilarating conclusion to Season 2, in which it’s revealed that Brainiac has been secretly bonded with Lex Luthor for years. Luthor escapes prison and joins Gorilla Grodd’s expanded Secret Society—the Legion of Doom from Super Friends, complete with the swamp-based secret headquarters. We learn pretty quickly that Luthor still has a link to Brainiac, which causes him to become increasingly aggressive and erratic as his obsession with reuniting with Brainiac grows. Luthor eventually wrenches control over the Secret Society from Grodd and ropes them into finding a way to revive Brainiac.

The penultimate episode doesn’t have a single line by any Justice League member, focusing instead on Luthor and the Secret Society. Luthor converts the Secret Society’s headquarters into a spaceship to travel to the location in space where Darkseid and Brainiac were blown up in Season 2 of Justice League. Dissatisfied with Lex after he verbally and physically abuses her, Tala breaks Grodd out from the cell where Luthor is holding him. The Secret Society splinters into factions and fights one another, with Luthor’s group eventually coming out on top. Luthor captures Tala—who he was previously dating—and straps her into a device to exploit her magic to reconstitute Brainiac. Just as he goes to start the process, he is interrupted when time is stopped by an immortal named Metron.

Much like when The Watcher shows up in Marvel comics, Metron’s appearance is an “uh oh” moment that communicates to the audience just how important the events are. As expected, Lex doesn’t heed Metron’s warning that his actions “[threaten] the entire universe, past, present, and future,” and to his horror, accidentally resurrects Darkseid instead of Brainiac. Darkseid destroys the spaceship—Luthor and the remaining members of the Secret Society survive—and then teleports back to Apokolips to reunite its armies, which are on the brink of civil war in Darkseid’s absence. Their first stop is Earth.

Luthor and the remaining Secret Society members notify the Justice League of Darkseid’s return, and the two groups reluctantly team up to combat the threat. What follows are some of the most awesome sequences that I’ve ever seen in a superhero cartoon: Darkseid destroys the Daily Planet building by throwing the giant planet statue through the roof, an old man at the Great Wall of China reveals himself as the Martian Manhunter (who had been absent from the previous few episodes as he learned about humanity) by unexpectedly beating up Parademons and taking the form of a dragon, Batman deftly becomes the first person to evade getting hit by Darkseid’s Omega Beams, and Superman delivers the following awesome monologue before punching Darkseid through no fewer than 7 buildings.

“Me, I’ve got a different problem. I feel like I live in a world made of cardboard, always taking constant care not to break something, to break someone. Never allowing myself to lose control, even for a moment, or someone could die. But you can take it, can’t ya, big man? What we have here is a rare opportunity for me to cut loose, and show you just how powerful I really am.”

Despite “cutting loose,” Darkseid still manages to incapacitate Superman with a weapon called an Agony Matrix. Luckily, who’s there to save the day except…Lex Luthor?

Luthor had spent most of the episode fighting Parademons side-by-side with Batman; however, he eventually notices Metron observing the battle. He convinces Metron to give him a chance to beat Darkseid, so Metron takes Luthor to the Source Wall: an enormous wall at the edge of space that protects the one thing that Darkseid wants above all else: the Anti-Life Equation. [I know that I’m throwing around a lot of sci-fi terms with little context, but the specifics about what these things are and what they do aren’t particularly important to enjoying the episode.] The Anti-Life Equation represents the ultimate knowledge and is so powerful that even Metron refuses to go with Luthor to get it, saying that “only a twelfth-level intellect has the slightest hope of surviving what you’re about to experience.” Despite Metron’s warning, Luthor breaches the wall. 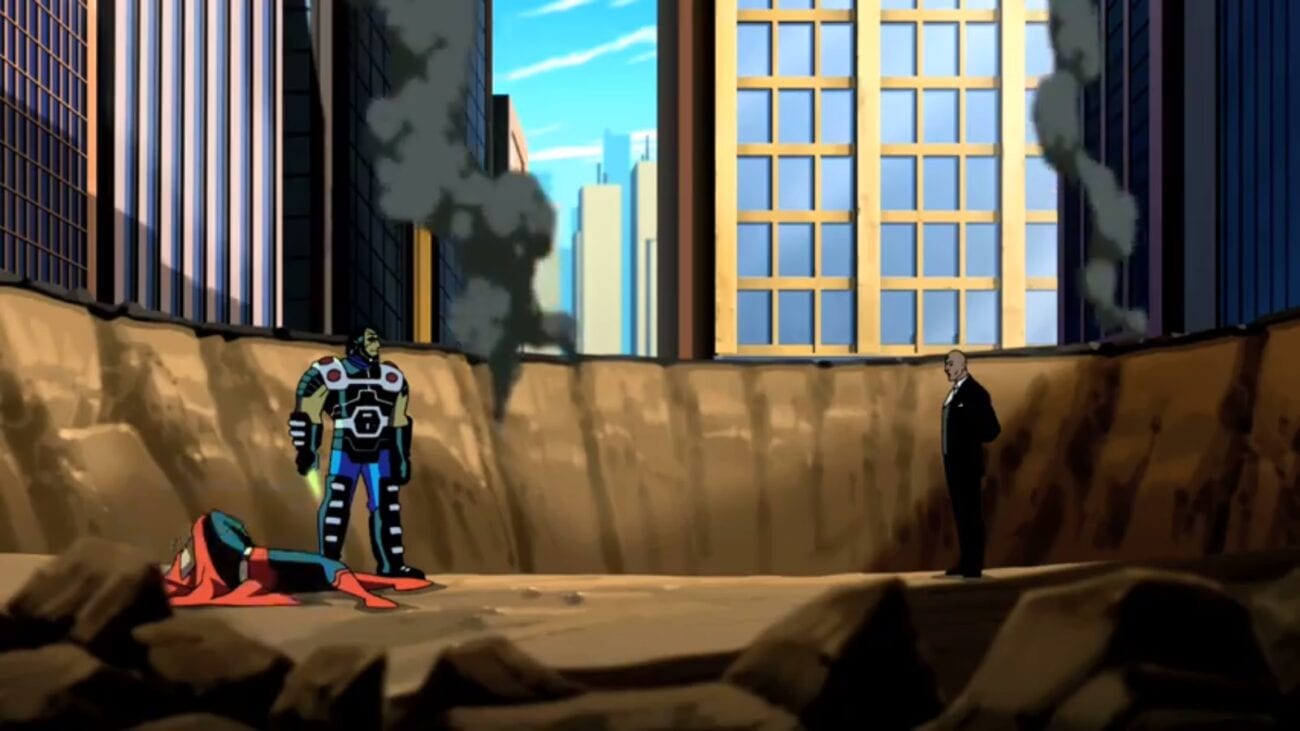 Back on Earth, Darkseid is about to kill Superman with a kryptonite dagger when Luthor shows up, dressed to the nines in a three-piece suit. He reveals to Darkseid that he has the Anti-Life Equation, which dazzles the pair before exploding, presumably killing them both. The episode ends with the Justice League giving the villains that helped them a five-minute head start as gratitude for their help—rather than just taking them directly to jail—before starting to pursue them to continue their adventures.

While Batman: The Animated Series was the more groundbreaking and popular series, Superman: The Animated Series always felt more like the launching point for Justice League. Superman’s Metropolis is much closer to the brighter, more modern setting and aesthetic that is featured in Justice League, and his rogues’ gallery plays a much larger role in the series. It’s fitting then that the culmination of the entire DC Animated Universe centered around Superman’s three greatest and most powerful villains: Brainiac, Lex Luthor, and Darkseid. All three characters play major roles in the mythos of Superman: TAS, with Brainiac and Luthor being present since Superman’s three-part origin arc and Darkseid brainwashing Superman in the two-part series finale.

The writing in Season 3 is less consistent than in previous seasons, corresponding with an uptick in the show’s embrace of camp (if you had the ability to mind control any member of the Justice League that you wanted, why would you waste the opportunity staging all-female cage fights for money?), but there are still several standout episodes, including the finale. The final season has some great sendoffs and conclusions to longtime characters and storylines, including Supergirl, who decides to escape Superman’s shadow and live in the future with the Legion of Super-Heroes. None of the sendoffs are as spectacular as Luthor’s, though.

It’s hard to truly call it a redemption arc since Luthor caused the mess in the first place and wants to beat Darkseid to punish him for severing his connection to Brainiac instead of any altruistic reasons, but it’s still a fascinating turnaround. To Luthor’s credit, he could have easily waited until after Darkseid had killed Superman before confronting him, but chose to interrupt him before that could happen. It speaks to Luthor’s importance to the entire DCAU and to the deftness with which the writers give moments to the major League members that the ending still feels earned and incredibly satisfying even though none of the Justice League members actually save the day. 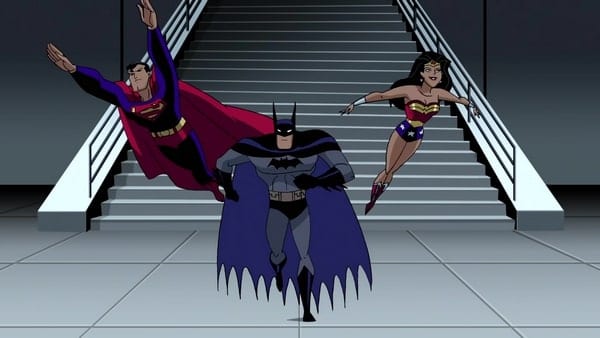 The final images of the series—and by extension, the entire DCAU—are a roll call of all of the members of the Justice League running down stairs toward the camera. I’ll admit, I get a little choked up by it. It’s a ridiculous thing to get emotional about, but watching these characters that I have followed over multiple series over the course of years get one last moment in the spotlight as the music swells just does something to me. It’s so rare that we get an epic and satisfying ending to a series, let alone an entire franchise that is as sprawling as the DCAU. One of the only comparisons that I have is Avengers: Endgame, which is high praise considering JLU preceded Endgame by over a decade and is an animated children’s show with a fraction of the budget. The DCAU is what the live-action DC Extended Universe should have aspired to be, and “Destroyer” cements its legacy.