Every year there are a select number of films that reignite the age-old battle between professional (or armchair) critics, and casual viewers. The fact is that there are always as many different opinions on any given movie as there are people who saw it. Yes, some of us devote ourselves to refining our skills at expressing those opinions in an entertaining and enlightening way (and yes, critics are increasingly becoming entertainers themselves), and in the process, we watch a lot more movies of different types and become inured to the charms of certain clichés and sensitive to the finer points of filmmaking that more casual moviegoers might overlook.

This can often make critics seem out of touch with the way most viewers actually experience films, but as an aspiring and practicing critic myself, I try my best to provide my own opinion in as undiluted a manner as possible. It also happens to bring me a certain amount of glee, as my idiosyncratic opinions get me stared at (I cackled maniacally as The Dark Knight was knocked out of my 2008 Top 10 by Mamma Mia!). At the end of the day, it’s all just music, and something vibes with you or it doesn’t, but that’s no excuse to come up emptyhanded when asked to explain why.

Last year’s prize sower of critic-vs.-customer disharmony was Last Christmas, a festive offering from the pen of national treasure and BAFTA’s fun aunt Emma Thompson, brought to our screens through the direction of Ghostbusters: Answer the Call auteur and would-be savior of modern feminism, Paul Feig. The film stars Game of Throne’s former most badass thing on TV and subsequently hastily written discount Griffith, Emilia Clarke, as ditsy young 20-something Kate, and the no-less-dishy Crazy Rich Asians and Feig’s A Simple Favor alum Henry Golding as her boyfriend-cum-life coach Tom. The film immediately raised critical eyebrows with its saccharine Richard Curtis-isms, outrageous accents, and laughably literal interpretation of George Michael’s lyrics, resulting in a critical consensus of all thumbs down, with many declaring it among the year’s worst.

So, going into a free screening last Christmas, expecting at best something to laugh at rather than with, an instructional guide on how not to make a movie, and a space-filler on my list of the Top 10 Worst Movies of 2019, I was a little taken aback to find myself walking out thinking: “That’s the movie everyone hates?” It seems I’m far from alone in that response, as the film proved to have legs, taking the No. 1 spot on UK streaming a year later (and it’s still in early November), with no doubt bigger numbers in store as the festive season marches on.

Don’t get me wrong: I see where that position comes from. This film has flaws, and it doesn’t take a seasoned professional to spot them.

Feig is a decidedly mediocre director, often turning out underwritten and choppily edited messes (like the aforementioned A Simple Favor and Ghostbusters franchise necromancy), and the songs suck. Sorry, but it’s true. They’re badly mixed as well. Whoever did the sound levels for this movie put the songs way too high, blaring out a dozen or so decibels higher than the dialogue and instrumental score. It’s also not a musical, whatever anyone has told you. There are a couple of nods to the songs in the dialogue, they play in the background, and there’s a big singalong rendition of the title track at the end. That’s not a musical—that’s a normal Christmas movie with an unusually specific theme. There are also some clunkers in the dialogue and one or two very awkward scenes of forced comedy, especially early on.

And of course, there’s the big jaw-dropper: the film’s very literal adaptation of the line “Last Christmas, I gave you my heart.” Yes, the joke everyone has made about the song being about a heart transplant is what this movie runs with. There is a big twist, but honestly, it’s so familiar that it didn’t bother me because it barely even counts as a twist anymore, it’s so obvious. Nonetheless, principle prevents me from giving it away in a review, but I guessed it myself 10 seconds into the trailer, so I doubt you’ll be far behind. That thing you’re thinking, yeah, it’s probably that.

However, it’s actually pretty easy to overlook those flaws when the rest of the confection is so sweetly winning. One thing Feig has always excelled at is coaxing friendly performances from his casts, and this might be his best effort in that regard. Clarke and Golding are each an absolute delight, have wonderful chemistry, and are deliciously sexy. Between them, they’re enough to earn the film a passing grade off the bat. Despite her broad accent, Thompson as Kate’s Yugoslavian mother gives her usual 100 percent, getting some of the film’s most solid laughs. 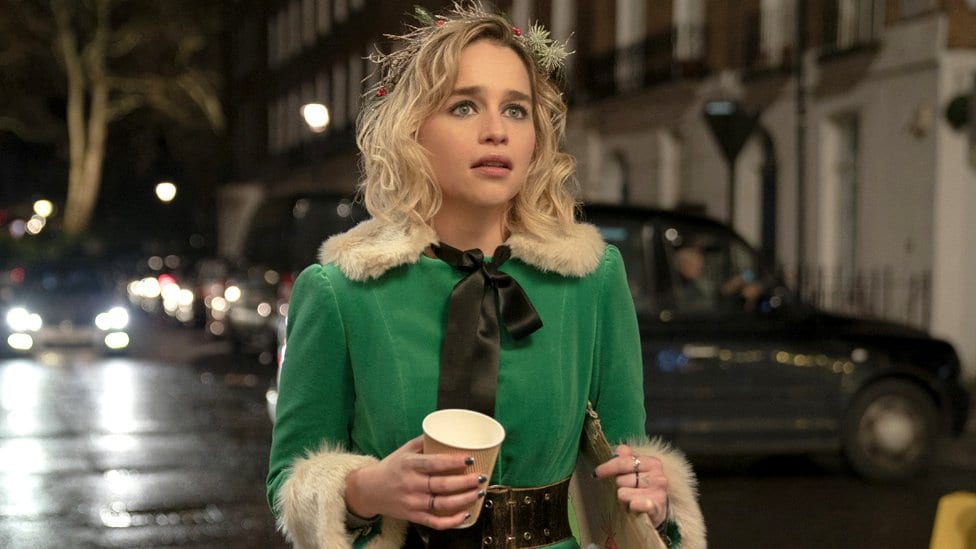 But it’s Thompson’s work as a screenwriter that really elevates the film—and yes, I am about to praise the script to Last Christmas. The film’s central character arc, revolving around Kate dealing with moving on with her life after surviving a life-threatening illness, is very original and undemonstratively and compassionately handled. Clarke herself went through multiple brain hemorrhages between 2011 and 2013, and her personal experience is brought to bear on her performance, bringing it into an intimate relief that made it feel—I’ll say it—real. Her experience of surviving a near-death experience and yet feeling no different, having no epiphany or sense of insight, just being another messed up 20-something with no sense of direction, was one I don’t think I’ve ever seen portrayed on film—and I for one bought into it.

A similar sense of authority comes from the detailed subplots woven into the story. As the film goes on, the initial awkwardness subsides, many of the minor characters reveal engaging complexities, and the film gets a lot more natural and likable. It touches on Brexit, homelessness, and LGBTQ+ issues in a way that keeps walking right up to the line of forced and cringeworthy, but for my tastes never oversteps it. The characters still feel real to me. Or at least, they feel like they’re coming from a real place with real emotions.

I even liked the twist, as silly and predictable as it is, as it made the movie mean something more interesting. It’s not just an average holiday rom-com any more, and it’s actually about the character growing, taking charge of her life, and becoming a better person by contributing to her community. That’s not just something she does to win the guy, but something she does for herself.

I’m not saying this movie is for everyone. I doubt the average Bergman stan will take much away from it, but I skipped away from the cinema. For all it’s problems, Last Christmas does absolutely nothing to incur any amount of bad will. It’s intensely endearing. I don’t like the phrase “guilty pleasure,” as I believe that if a movie works for you, then there’s always a reason why, and I hope that the defense of this movie I’ve mounted goes some way to prove that. But if ever a film merited addition to the rotation of festive guilty pleasures alongside fruitcake, marzipan, and custard, then it’s this one. It’s just a good thing that no movie was ever fattening, no matter how sweet it may be.