When I’m not working behind the camera or writing, I work as an extra in film and TV. It’s a very fun way to supplement your income as a freelancer and can be a great way to get onto big sets and network. Everything’s done online and you’re booked via email. Most of the time, you don’t know anything about the film or TV show you’re going to work on apart from the title, until you arrive on the day or have a fitting beforehand. Sometimes you may not be used at all, or it can be a mundane scene for a low-budget show that you never hear about again. However, sometimes you can have a truly memorable experience. Working on Steve McQueen’s film Mangrove was definitely the latter.

The first of a series of five films under the umbrella title Small Axe and commissioned by the BBC, each tackles a different aspect of the racism faced by the West Indian community in West London from the late ‘60s to the early ‘80s. If the first episode is anything to go by, this series looks like it will be the TV event of the year. This wasn’t reflected by the morning of my first day working on the project; I had to be on the other side of London for the crack of dawn and remember getting to the unit base at a small football stadium before the sun had come up. It was dark, cold and quite depressing, especially as I’m not a morning person. Usually, aside from work, the only time I see this time of day is when I’m still up from the night before.

I’m not sure if I knew we were filming a big scene for a Steve McQueen film until we got onto set. We were ferried down in groups, all in ‘60s bobby police uniforms we’d been fitted for on a previous day and shown into a very old police station. We were swiftly given directions for the scene but we didn’t realise the full scale of it until we started shooting. On action, we marched outside and started to herd a big crowd of protesters down the street. What I definitely didn’t know was who any of the actors starring in Mangrove were until I was shoved into the crowd and came face-to-face with Letitia Wright, one of the most talented young actors working today.

Wright leads an amazing cast that includes Shaun Parkes, Malachi Kirby, Jack Lowden and Sam Spurell, amongst others. You can tell that McQueen has his pick of any actor who’s available and that they’re glad to be there. From Wright, who’s had Hollywood blockbuster success in Black Panther and the latest Avengers movies, to Kirby, who’s had success on the small screen and steals the show in the courtroom scenes he speaks in. The performances are strong across the board and it’s refreshing to hear the thick accents the characters speak with, which may have been toned down under a different director. This is one of the most important elements for doing justice to the narrative, as the film is based on the true story of The Mangrove 9 and released on the 50th anniversary of the protest and subsequent court case.

What’s depicted is one of the most significant events in black history that occurred in the UK and perfectly reflects what’s still going on today with the Black Lives Matter movement. McQueen is one of the best examples of a director who wields the full power of film and uses it for good, to show the injustice caused by racism at pivotal moments in history. He won the Best Picture and Best Adapted Screenplay Oscars for 12 Years a Slave back in 2013, for his harrowing depiction of how an upstanding member of the community was tricked, kidnapped and sold into slavery in 1841. It’s a paragon of his unflinching and uncompromising style, reflected in everything from his intimate cinematography, to his actor’s raw performances and cathartic endings.

It’s easy to see that McQueen comes from a background as an artist, he’s even won the coveted Turner Prize for his visual installations. The genius part of his work is not just presenting the heinous injustice of slavery and its severity like typical Oscar bait; but rather illustrating the extreme emotions, anguish, loss of hope and sheer disbelief of finding yourself in such a situation. To think there was a time that two white men could see a black man doing well for himself, then abduct and sell him into slavery, is one of the worst examples of human deptavity anyone could come up with. However, nothing in 12 Years a Slave feels gratuitous or included for shock value. Instead it feels like an education that is sorely missing in curriculums across the US and the UK. 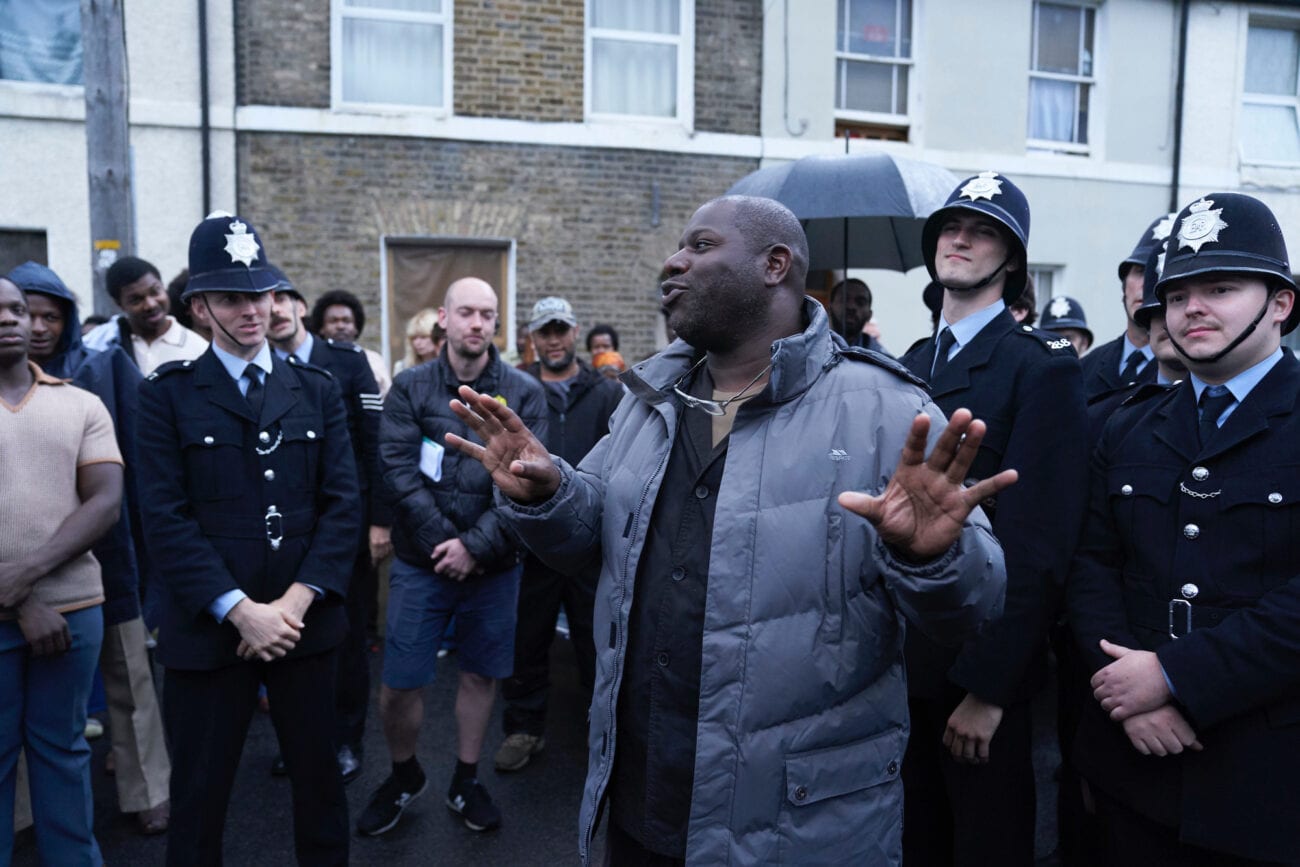 Mangrove is no different and it feels even more relevant to me personally, as it’s so close to home and didn’t happen as many years ago as you’d expect. It’s crazy to think that the ordeals being faced were happening just after the Summer of Love; yet even at this time, it’s depressing to see that racism was still rife, and in Notting Hill of all places. The owners and patrons of The Mangrove (the all-night restaurant from which the film gets its name) were constantly and violently harassed by the police; simply for trying to have one small location that the West Indian community could call their own, socialise in and enjoy the dishes from their native country.

Playing one such policeman was a mixture of emotions. It was equally a privilege to be part of such an important film as it was shameful to take on the embodiment of racist fascism. However, it’s true what they say, the villains have more fun and if it helps in a small way to get Mangrove’s message across, then I’m happy to do it. McQueen is a very hands-on director, as ready to praise you as he is to call you out if you’re not giving it your all. I was humbled to receive great feedback and encouragement from him and also found it hilarious when he had a massive go at someone playing a protester for leaning against a car during a take.

On the whole though, everyone was really invested and emotions were running high. It was a very serious scene and everyone was treating it as such. It’s one of the very few occasions in a lifetime that we had permission to be aggressive and shout in the face of perfect strangers. Not only that but we were encouraged to do it with as much ferocity as possible. For the climax of the scene I found myself face-to-face with Letitia Wright (see picture below, I’m the copper right in the centre of shot). I was in the middle of the front line and had the pleasure of actually acting with her. When McQueen called action, we screamed at each other until we were hoarse and when he shouted cut, we instantly relaxed and dissolved into smiles.

Going from one extreme to the other was surprisingly tiring and we were having to psyche ourselves up before each take; it was one of the most thrilling experiences I’ve ever had. After seeing just one part of this film being made, there was no doubt in my mind that it was going to be something special. Mangrove premiered for free in cinemas across the UK, as it was chosen as the opening film for the BFI London Film Festival. This added another layer to its importance as a film that should be seen by all. I was fortunate to attend one of the screenings at the BFI itself on the Southbank and seeing myself in such an incredible film was a once-in-a-lifetime experience I’ll treasure forever.