It’s almost impossible to measure Toy Story’s impact on pop culture and the millions of children who, like me, were younger than 10 years old when it came out. Its impact goes beyond the three sequels (one of which was once the fourth-highest-grossing film of all time), spinoff tv shows, short films and specials, and unending merchandise that it has spawned over the last 25 years. I don’t think that it’s a stretch to say that as Pixar’s first feature film, it marked the beginning of the end of the Disney Renaissance. Within a decade, Pixar was dominating both critically and commercially with megahits like Toy Story 2, Monsters, Inc., Finding Nemo, and The Incredibles, while many of the early-aughts features under Disney’s solo banner failed to break into the larger cultural memory at best and were critically or financially disappointing at worst. Since 2005, there have only been two traditionally animated Disney feature films—The Princess and the Frog (2009) and Winnie the Pooh (2011)—as Disney has largely abandoned the animation style that made it a cultural behemoth in favor of a computer-animated style that is increasingly indistinguishable from Pixar as a whole [1].

More personally, I also don’t think that it’s a stretch to call Toy Story my first pop culture obsession. I owned multiple 12-inch Buzz Lightyear toys, an RC toy (which despite its name, was not remote controlled), a Buzz Lightyear Space Explorer spaceship toy, Buzz Lightyear light-up sneakers (I was very cool), a Woody marionette, and who knows how many other smaller action figures and fast-food toy tie-ins. Two of my first three video games were related to Toy Story (we got videogames relatively late, so they were Buzz Lightyear of Star Command and Toy Story 2 for Playstation). I still own VHS copies of Toy Story and Buzz Lightyear of Star Command: The Adventure Begins, the latter of which we woke up early before school to watch its parent television series. And I was Buzz Lightyear for Halloween once, a fact that will shock no one that has made it this far into this essay.

I’m sure that the majority of people reading are familiar with the plot, or at least concept, of Toy Story, but just in case—or if it’s been a while since you’ve seen it—here is a quick recap. The film takes place in a universe where toys come to life when their owners aren’t looking. Woody (voiced by Tom Hanks), a cowboy doll and favorite toy of a young boy named Andy, becomes jealous and clashes with a “space ranger” toy named Buzz Lightyear (Tim Allen) that Andy gets for his birthday. Buzz is completely oblivious to the fact that he is a toy, thinking instead that he is the real Buzz Lightyear. Their rivalry causes the pair to become lost in the outside world, only to be found by Andy’s next-door neighbor Sid, who blows up and mutilates toys for fun. After Buzz comes to grips with not being the real Buzz Lightyear, he and Woody are able to escape Sid and make it back to Andy just in time before his family moves to a new house.

One of the main things I was interested to see upon rewatching the movie was how the quality of the animation held up. Computers have obviously come a long way in the last 25 years, and while the sequels and later subsequent Pixar films do things that Toy Story couldn’t have dreamed of doing, the animation still largely looks good. There were only a few things—the occasional facial expression, a few night skies and exterior shots, and Scud the dog—that struck me as feeling off or bad. I think it was wise to keep the animation simpler and choose the moments to show off, but it did strike me as odd that the smaller scale of the film sets the majority of it within 100 feet of Andy’s bedroom. While it’s necessarily a smaller-scale film—there is definitely no airport baggage conveyor belt like in Toy Story 2 or giant trash incinerator inferno like in Toy Story 3—the emotional core and stakes remain the same as those in the sequels. 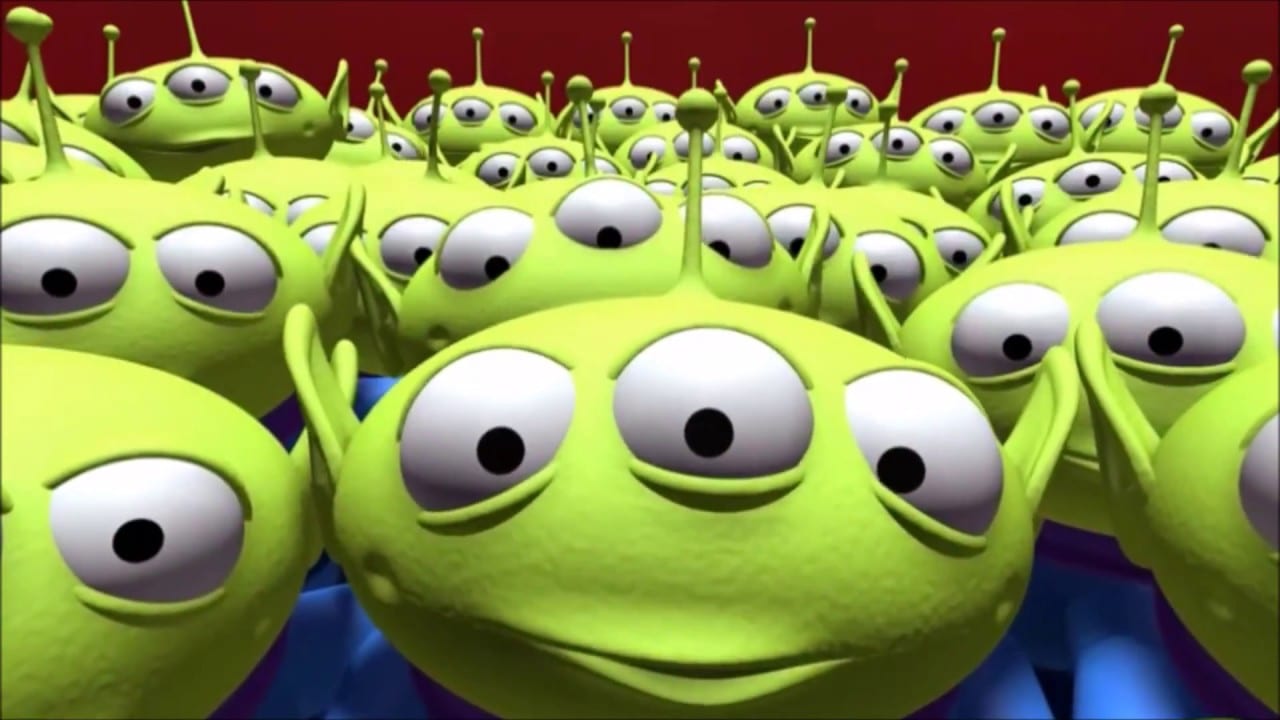 While I wasn’t very surprised by the subtle adult humor that is intended to go over children’s heads in the film, I was surprised by the sophistication of the themes that the film presents. Both Buzz and Woody undergo an existential crisis—Buzz by learning he’s only a toy, and Woody by falling out of favor with Andy. Their respective crises challenge their senses of self-worth, as they realize that they aren’t as special as they had previously imagined. Buzz’s realization that he is not a real space ranger is especially difficult. The scene where he makes his discovery is really incredible: he stands on a banister before attempting to fly to a window, all to the song “I Will Go Sailing No More.” As the music swells, you almost believe that Buzz might be able to pull off a miracle, only to share in his devastation when he crashes to earth. Buzz’s shattered illusion of invincibility and grandeur is literalized by his broken body, with his arm popping out of its joint. Buzz and Woody are only able to gain new senses of meaning and purpose through their friendship, kinship with their fellow toys, and the happiness they provide for Andy.

While I don’t think Toy Story is a religious movie, I do think that it lends itself to biblical readings, or at the very least comparisons. Woody and Buzz can easily stand in for Cain and Abel, both vying for the love and affection of a godlike figure. It may seem like a stretch to call a child a godlike figure, but the entire lives of these toys revolve around Andy and his affections. Like Cain, Woody’s jealousy of Andy’s love for Buzz eventually pushes Woody over a metaphorical edge—and Buzz over a literal (window) edge. Fortunately for all involved, Buzz is not killed, and the pair are able to reconcile their differences to the benefit of themselves as well as Andy. I think that comparisons can also be made to the Parable of the Prodigal Son. In my interpretation, both Woody and Buzz could be prodigal sons—they are lost when they are separated from Andy, lose faith in themselves as they apparently lose everything, and eventually rediscover meaning in the love of their father/owner/god figure. 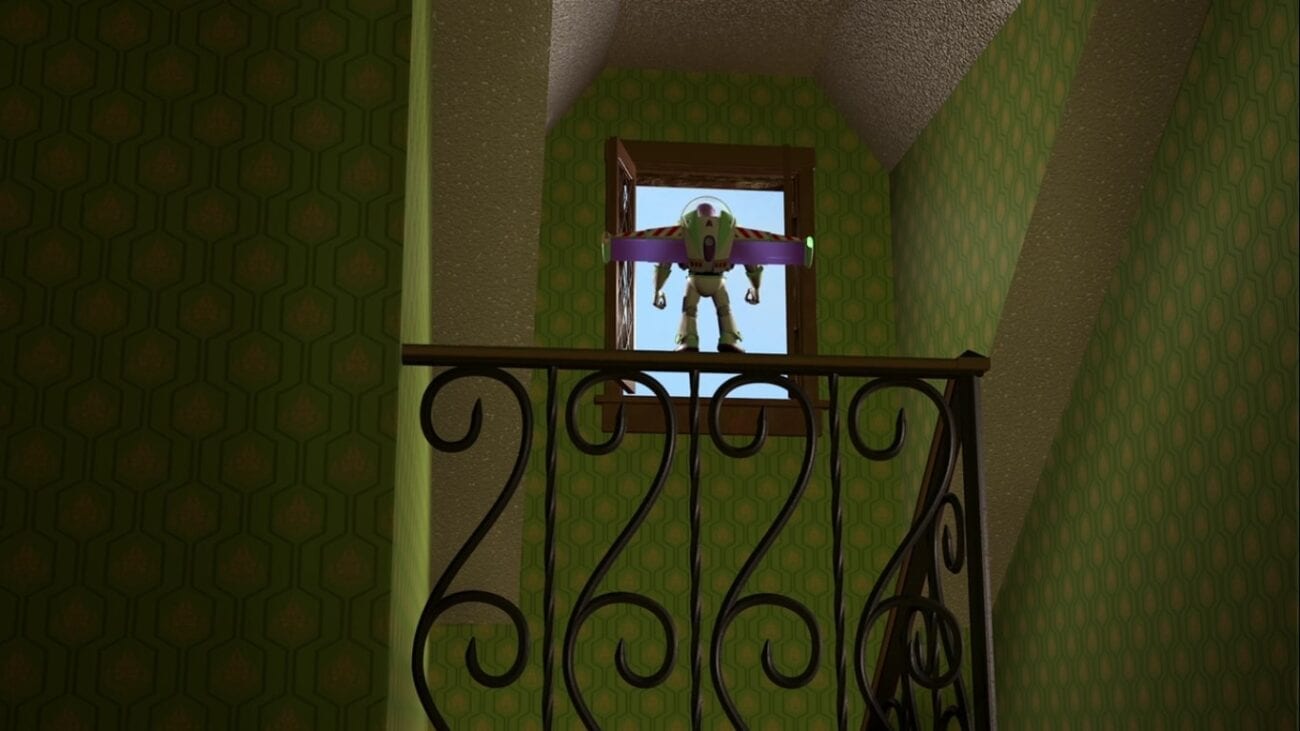 While the cynic in me is sure that there were considerable merchandising considerations in making the main characters be toys, there’s still something wonderful and creative about the concept of the film. Toy Story planted a seed with infinite imaginative possibilities—that the toys you played with were alive—into the minds of millions of children whose imaginations already ran wild when they played with their toys. The story, characters, and the sense of wonder they inspire will continue to endure, even when the day comes when the once groundbreaking animation feels dated. The film is an undeniable classic, and I hope that if I have children someday, it will capture their imaginations like it has mine for the last 25 years.

[1] Films that I thought were official Disney/Pixar releases but were not: Tangled, Wreck-It Ralph, Frozen, Frozen 2, and Moana.