In the much loved and missed sitcom Community which ran between 2009 and 2015, the character of Abed Nadir is a fan of a fictional low-budget film series known as Kick-Puncher. The movie series within this world revolves around a cyborg cop who busts criminals using his powerfully enhanced kung fu moves. Kick-Puncher is very much influenced by a forgotten time in home entertainment, a time when the shelves at your local video store were heavy with titles such as Cyborg (1989), American Cyborg: Steel Warrior (1993) and Automatic (1995). After Terminator (1984) and Robocop (1987) became big hits, the video stores were flooded with product looking to cash in on the robot action flick craze.

Shortly before this deluge, the video store (in the UK at least) was a seemingly magical place. In the early, to mid ’80s the big cinema releases such as Ghostbusters (1984), Gremlins (1984) and the latest Rocky movie would take around a year to become available to rent, and you couldn’t buy them for anything less than around £80 for at least a year. Instead, the video shelves were 90% product that was made for the video market, or in some cases had skipped cinemas in the UK before the advent of the multiplex. Bruce Lee was still a big business in the early ’80s and his movies on video were constant rentals. Then there was someone called Chuck Norris… 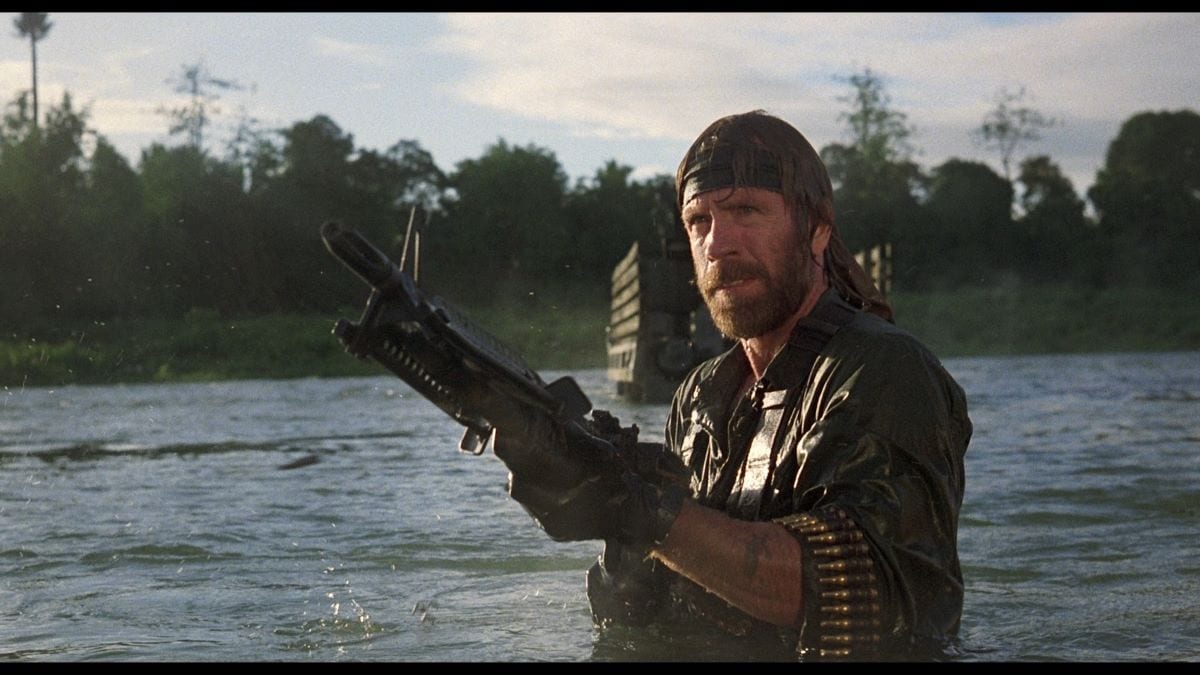 In amongst the video nasties, Mad Max (1979) and Star Wars (1977) rip-offs, Chuck Norris was seemingly THE action hero of note at your local video store. Norris was, of course, a martial artist before he was an actor and his appearance in Way of the Dragon (1972) led to starring roles in A Force of One (1979) Silent Rage (1982) and Missing in Action (1984). These films filled the shelves and were a safe bet if one of Bruce Lees brief filmography was unavailable. Even though “ninja” was a dirty word as far as British censors were concerned, alongside Norris and Bruce Lee sat a great many imported ninja films starring Sho Kosugi. This then led to American Ninja (1985) launching the career of Michael Dudikoff and then later David Bradley in American Ninja 3 (1989).

Around the midpoint of the ’80s, Arnold Schwarzenegger suddenly became a box office draw. So we would wait and wait for his films to become available on video a year after their cinema release as Sylvester Stallone also began to become a prominent action star rather than the actual actor he had started out as. Chuck Norris films began to resemble the Rambo series more than ever and thanks to the success of Conan The Barbarian (1982) and Conan The Destroyer (1984), the low budget genre film looking to cash in started to cast non-actor beefcakes in starring roles in fantasy flicks that filled in the rest of the gaps as you waited for Commando (1985) to be released on video.

The action hero changed somewhat as we headed towards the end of the decade. The thinking being that if Hollywood could turn a non-actor bodybuilder into a box office draw then they could do the same elsewhere. Steven Seagal, a martial arts instructor, was granted a film career as was martial artist Jean Claude Van Damme. A majority of their early work went straight to video in the UK. Above the Law (1988) for Steven Seagal became a big hit and Bloodsport (1988) and Kick Boxer (1989) were huge amongst my peer group. Neither Seagal nor Van Damme could really act, but it didn’t matter, they were delivering things we wanted to see and at the time we didn’t pay attention to the fact that the notorious Cannon Films were bankrolling this or that they had skipped cinemas. 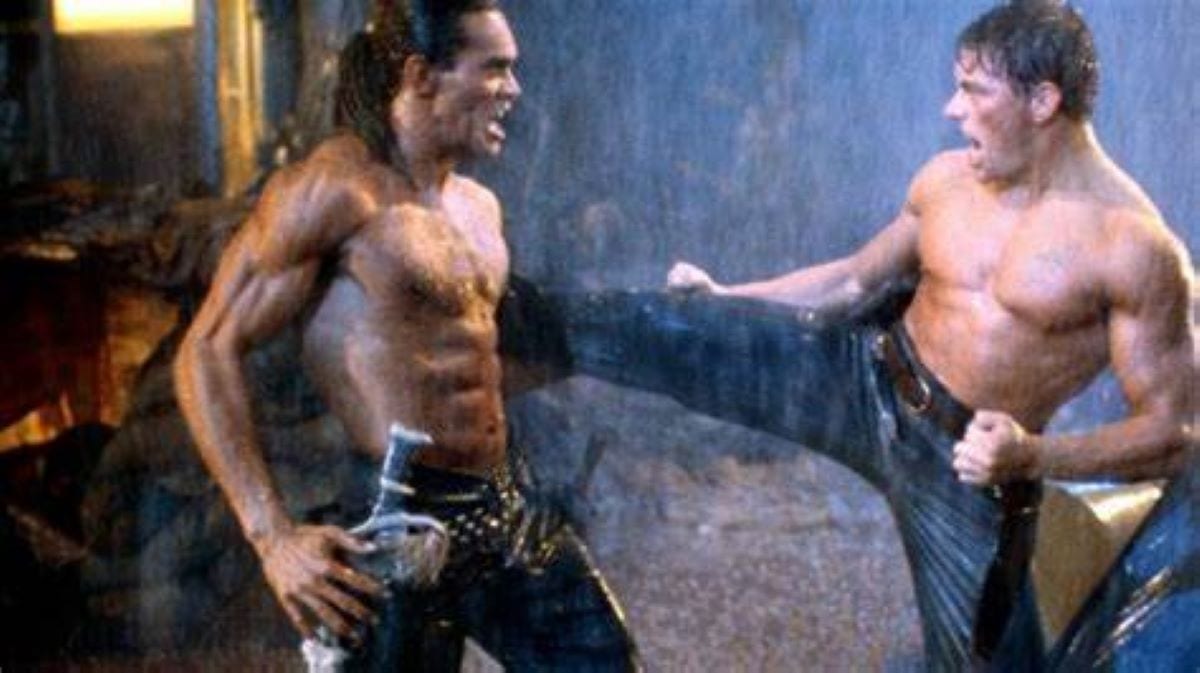 Off the back of Rocky 4 (1985) and Cannon’s Masters of the Universe (1987), former model Dolph Lundgren also entered the straight to video market with the likes of Red Scorpion (1988). What these three and the still working Chuck Norris lacked in acting ability they made up for in on-screen charisma and the ability to snap limbs. Van Damme and Lundgren, in particular, had a certain knowing look to most of their work, which made them endlessly watchable. Thanks to their endless popularity on video, it was time for a boom.

Perhaps wisely, the lower budget end of things often backed by Roger Corman or Imperial Entertainment, ended up imitating Van Damme hits Cyborg and Kickboxer. Every month or so we would end up getting a martial arts tournament movie, a martial artist cop on the edge or an undead police officer revived by science and looking for revenge. Van Damme abandoned the Cyborg, Kickboxer and No Retreat, No Surrender (1986) franchises early on, but this didn’t stop them. These movies all had sequels of rapidly diminishing returns with a few brief shining entries such as Kickboxer 4 (1994) and No Retreat, No Surrender 3 (1990).

The straight to video market began to push new action heroes upon us such as Loren Avedon, Olivier Gruner, Don “The Dragon” Wilson, and most promisingly Cynthia Rothrock who was perhaps the most talented of all of them. Later in this cycle, as we reached the ’90s we got former soap star Sasha Mitchell, former football player Brian Bosworth, brit martial artist Gary Daniels, Jeff Wincott and then the great Mark Dacascos. Part of the excitement of this period, was taking a chance on these brooding. oiled up hunks glaring at you from the shelves when Double Impact (1991) was all rented out.

There was of course no IMDB or instant opportunity to read a review of anything on the video store shelves. Most of this product was ignored by the newspapers and so you usually just had a cover and a blurb on the back of the sleeve to go by. You would then offer your £3 to the affable local behind the counter (before Blockbuster Videos) and take your chance for an afternoons entertainment. Sometimes it paid off, sometimes the product had ideas above its station and ended up a drag. This unpredictability was all part of the fun though; we never asked for money back after a disappointment, it was all part of the process.

The ones that stood out were No Retreat No Surrender 3, starring Loren Avedon where the choreography seemed sharper and more vital than a lot of the other stuff of the time. Then there was Nemesis (1992) starring Olivier Gruner and directed by the ubiquitous Albery Pyun (Cyborg) which married cheap robotic effects with John Woo gunplay to adrenaline-pumping effect. Sasha Mitchell was once described as a poor mans Keanu Reeves but in the Kickboxer sequels he did have charisma and physicality that may have led somewhere had he not thrown it all away thanks to a conviction and jail time for domestic violence.

The likes of Gary Daniels, Mark Dacascos and Brian Bosworth managed to score early cinema releases with the likes of Fist of the North Star (1995), Only the Strong (1993) and Stone Cold (1991). None of these were box office hits but found their audience on home video and they ended up making a career in the video sphere for the rest of the ’90s. The market was so flooded with would-be action heroes after Van Damme became a box office star with Universal Soldier (1992), that the likes of Ken Wahl, Joe Lara, Jeff Speakman, Billy Blanks and Kathy Long barely registered. Then you had the likes of Christopher Lambert (Highlander, 1986) give up on cinema releases and become quite comfortable in the video shops as well.

After the release of Speed in 1994, the old definitions of the action hero got blurry, although perhaps after Die Hard (1988) turned Bruce Willis into one of the big three, that was always on the cards. After Speed, everyone started doing the action hero thing. Christian Slater, Johnny Depp and Kurt Russell proved you didn’t have to have a thick accent or a kickboxing background to scowl and hold a gun and Van Damme and Seagal’s output took a nosedive in quality as well as box office. By the end of the ’90s, the straight to video market had followed suit and begun to take a turn back towards horror. Things changed so much that Mark Dacascos’ best movie Drive (1997) wasn’t even available in many video stores and ended up becoming a cult hit in the UK when it screened on Channel 5 in 1999.

Van Damme, Lundgren and Seagal ended up settling back on to the video (now DVD) shelves from where they came. Even Sylvester Stallone, Bruce Willis and Schwarzenegger ended up haunting these shelves eventually, in films of low quality attempting to echo their previous glory. Stallone revamped some of these forgotten heroes in his Expendables films (2010 -2014) with appearances by Van Damme, Norris and Gary Daniels as well as some of the new breed. Times had changed in a massive way and most of the would-be stars clogging up the video shelves of the ’80s and ’90s went back to the former careers they enjoyed before being recruited by ambitious producers.

In recent years the glory of this era has been revamped somewhat with the careers of Scott Adkins, Michael Jai White and Tony Jaa. Adkins, in particular, seems like a man born unfairly out of time, a martial artist with skill and charisma who would have broken out back in 1989 but now has a film career that goes mostly straight to Netflix. Adkins and Jai White’s Undisputed films are well worth a look and Adkins in Universal Soldier: Day of Reckoning (2012) is perhaps the best straight to DVD film of the last twenty years. During the pandemic lockdown, Scott Adkins has taken to YouTube to create a series called “The Art of Action” which has been a compelling look back at the key figures from this era with candid and lengthy interviews.

With everything available at the touch of a button and the ability to discuss the latest movies with people everywhere very easily, we have definitely lost something. The straight-to-VHS period of the late ’80s and early ’90s was a golden age of discovery. If you watch closely and are familiar with the era, then you can see its influence on everything from Hobo with a Shotgun (2011) to the recent Blood Machines (2020). You never knew quite what you were going to get back then, but more often than not you could end up with a night of entertainment better than anything playing in cinemas at the time. There was definitely an element of surprise that is sadly lacking today.