Everyone knows about Batman’s film output, from the highs of Tim Burton’s original Batman movie, to the lows of Joel Schumacher’s Batman and Robin and right back up to Christopher’s Nolan’s prolific The Dark Knight. However, what you may not know is he has many animated movies to his name; some are direct adaptations of key graphic novels, and others based on new material. They can be a great introduction to anyone who would like to know a bit more about the Bat’s epic history on the page, and are great in their own right. Here are five of my favourite animated gems that I feel can stand alongside the best of the live-action films in terms of quality: 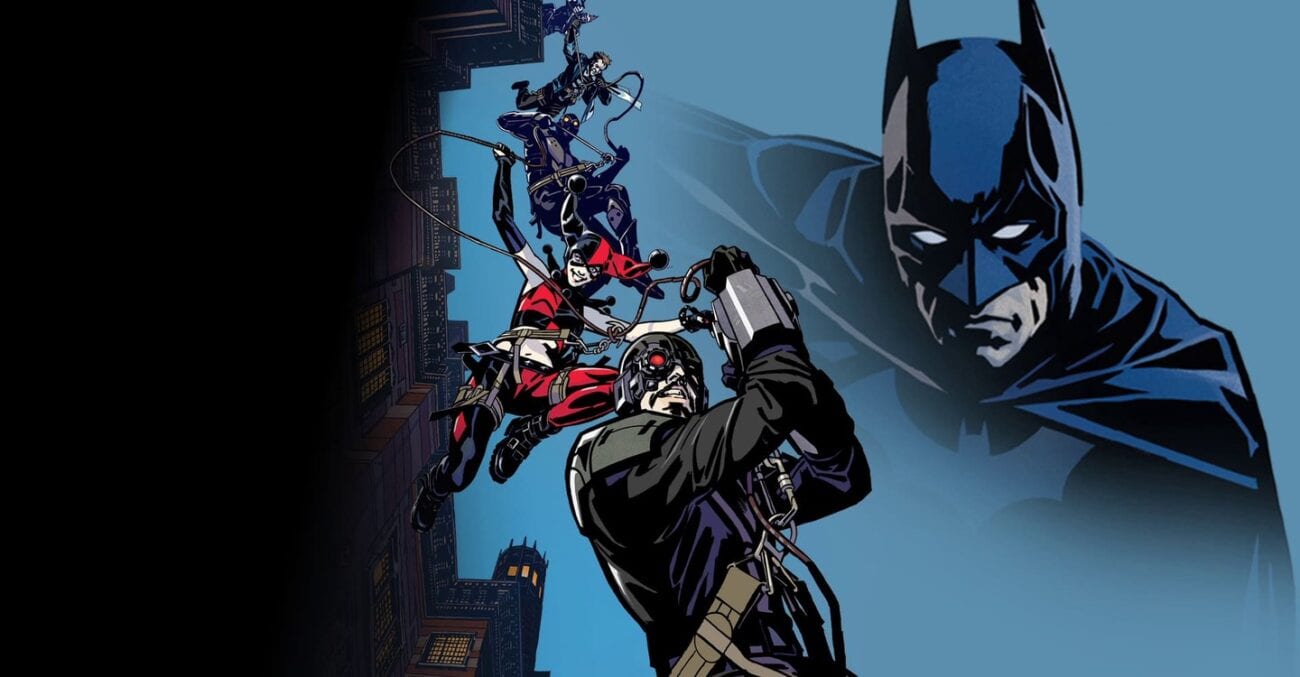 Taking the popular and edgy animation style from the wildly successful Arkham video games, this is what the live-action Suicide Squad movie should have been. It was made before David Ayer’s disappointment and he did take things directly from it, including stylistic elements like the visual motifs for the character’s intros and music cues. In fact, if he’d just made a live adaptation of Assault on Arkham, it would have been far more successful in every way. Forget witches and Will Smith, this is a street-level, contained, simple heist story that balances all its characters and elements perfectly. The movie boasts a better line-up for “Task Force X,” as well as Batman, Joker, Riddler and Penguin all playing important roles but not pulling too much focus.

Suicide Squad was a bloated, convoluted mess that meant that many of the characters of the team were barely seen and it didn’t commit fully to the subplot between Joker and Harley Quinn, which is what people responded most to. Director Jay Olivia achieved what Ayer didn’t in this animated movie and this isn’t the only time he’ll appear in this list. He’s the master of animated superhero movies, also having made two of the best Justice League animated movies with The Flashpoint Paradox and War. Both of these were touchstones for Zack Snyder’s Batman v Superman and Justice League movies as well. Warner Bros. should just give Olivia the reins and see what he can do with live-action and a big budget.

4- Batman Beyond: Return of The Joker 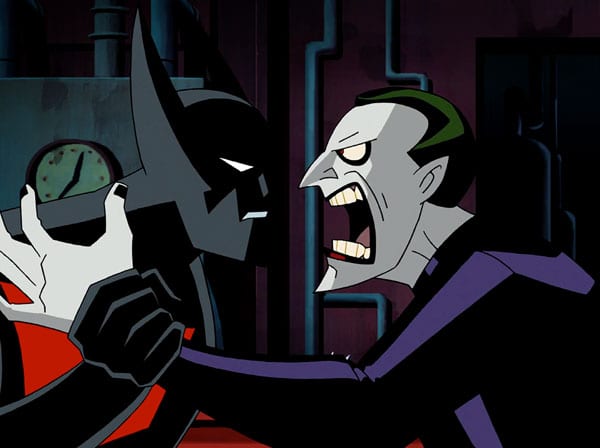 This movie shrewdly combines characters and stories from the original, ground-breaking Batman: The Animated Series and its slicker follow-up The New Batman Adventures, with the brilliant Batman Beyond (Batman of the Future in some countries, including the UK). I grew up on these shows and the latter was a particular favourite; it showed an elderly Bruce Wayne training a new teenage protégé in the distant future. On paper it sounds like it could be a nightmare, but it was excellent. It really did something fresh and different with its future setting/tech, with new, original villains. So what better way to combine the new with the old than to bring back Batman’s greatest ever nemesis for this futuristic version to contend with.

The movie is directed by Curt Geda, who worked on The New Adventures, Beyond and would also go on to work on the lesser known, very underrated Beware The Batman CGI series. He does such an incredible job of showing the intense relationship the Bat has with The Joker, that it’s only rivalled on the screen by another entry in this list and Nolan’s The Dark Knight. There’s a long flashback that shows the original Batman’s last showdown with the Clown Prince of Crime and it’s as harrowing as it is sad; so much so that it never fails to make me shed a tear; this may sound like an exaggeration but watch it and you’ll see what I mean. There are more than a few horrific moments, make sure you see the uncensored version. This is the first of an unofficial trilogy that takes the top three spots in this list. The story does exactly what it says on the tin, rather than focusing on Batman’s origin, it shows his first year on the job. It’s a direct adaptation of Frank Miller and David Mazzucchelli‘s seminal graphic novel, which has been the touchstone for every project that shows the Bat early in his career since; especially for Nolan’s Batman Begins. It’s short, sweet and incredibly simple, in the best possible way. It allows you to focus on the characters and incredible dialogue that Miller wrote, delivered by a great voice cast that includes Bryan Cranston as Jim Gordon and Ben McKenzie as Batman (Gordon in the Gotham TV show). It contains one of my favourite lines in any Batman property that encapsulates the character perfectly:

“You can never escape me. Nothing harms me. But I know pain. I KNOW pain. Sometimes I share it. With someone like you.”

The art style, taken from the novel, is sleek, with soft edges and a vintage feel. It perfectly reflects the story’s structure and tone. The movie is directed by Sam Liu, who’s also a big name in animation and was behind other great DC animated movies such as Justice League: Crisis on Two Earths and Superman/Batman: Public Enemies. It’s the shortest entry on the list but it’s good that no one tried to add anything to Miller’s perfect script, as Liu did do this with his adaptation of The Killing Joke to disastrous effect. It’s a quietly confident story that’s subtle, nuanced and realistic.

2- Under the Red Hood

If the previous entry was the start of Batman’s career, this movie represents the middle. Under the Red Hood explores the deep and complex relationship the Bat has with his sidekicks, the first two Robins. With a powerful opening that shows how the second, Jason Todd, is brutally murdered at the hands of The Joker, the story raises questions as to whether the he was right to bring junior partners into the world of crime fighting. It explores the consequences of such a decision and also shows the tentative partnership Batman still has with the first Robin, Dick Grayson. The story is sophisticated in its themes and is based on the graphic novel Under the Hood by Judd Winick and Doug Mahnke, although the movie goes in its own direction.

The original event it’s based on is a story arc from ‘88 called Death in the Family and it’s appropriate as the movie deals with father-son dynamics in a genuine way. This movie is by Brandon Vietti, who directed many episodes over four series of the excellent The Batman TV show, as well as Superman/Doomsday. It also has the most impressive voice cast of any of these entries, which includes Bruce Greenwood as the Bat, Jensen Ackles as Todd, John DiMaggio as Joker, Neil Patrick Harris as Grayson and Jason Isaacs as Ra’s al Ghul. The movie has genuinely funny moments of black comedy, as well as deeply touching moments and is highly rewatchable. 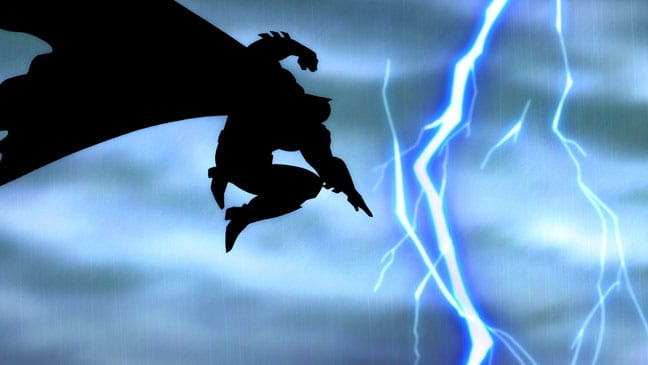 The last entry on my list suitably covers the end of Batman’s career and it’s a beauty. Based on another staple graphic novel of the same name by Frank Miller, the savvy source material is like mainlining pure heroin for fans and it single-handedly changed comic book culture. It marked the end of the Bronze Age with its bright colours and cartoon-like style and ushered in the Dark/Modern Age of comics with its more abstract, gritty realism that would become the standard for all superheroes moving forward, right up to the present day. In other words, it’s the most important graphic novel ever and one of the best. The movie, again directed by Jay Olivia, is what Batman v Superman should have been and is a faithful adaptation; to tamper with such a masterpiece would be blasphemy, and it contains more of Miller’s amazing dialogue:

“You try to hold me back but you’re weak. You know it in your soul. You’re nothing but a hollow shell. A rusty trap. The time has come…”

The story’s split into two parts, however the second is the main event, as it provides an end to Batman’s historic rivalry with The Joker, as well as his ultimate showdown with Superman; but it couldn’t exist without the first, so it’s best to view it as a whole if possible (it was released this way later). The narrative highlights the importance of Batman by showing a city in chaos and depravity without him. The fact that it needs him to come out of retirement to clean it up shows how he makes a difference and he’s the only man for the job. It tells you why he has to be Batman and the way it illustrates his way back to crime-fighting is epic and compelling, so much so that this two-part animated movie sits up there alongside the best live-action offerings. It’s a must-see for any fan. 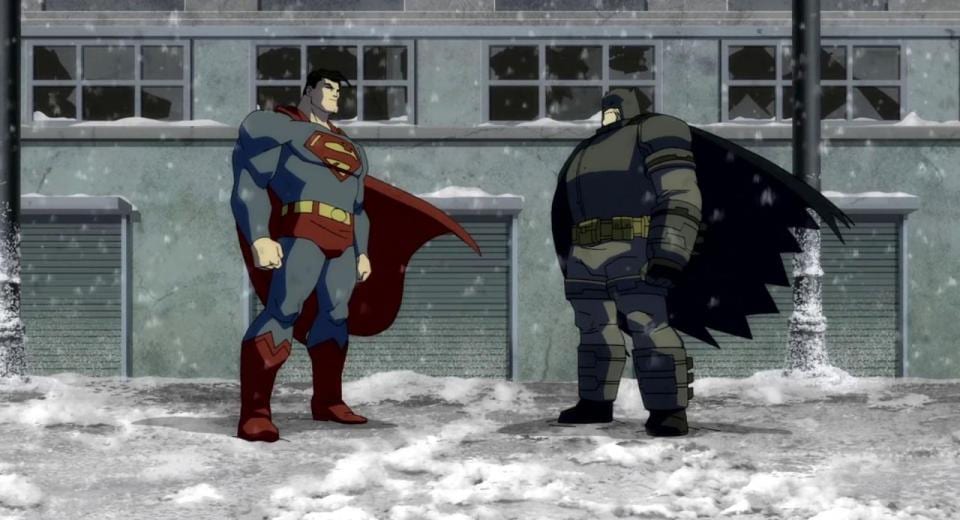 With the rise of animation over the years, there are so many more films to enjoy once you realise they’re just as relevant as live-action in their own way. By not having to rely on huge budgets, they’re not limited by anything in their scope except imagination. This is reflected in the growing popularity of anime and CGI animation over the years. If you adjust your perspective this way, you can enjoy more great Batman stories as well as ones from other superheroes and not have to wait years for the next adventure.