Besides the preinstalled Astro’s Playroom, The Pathless was the first game I played on the PS5. I had played the developers previous title, Abzû, so I sort of knew what I was getting into here. A minimal tutorial and HUD, along with great visuals were a given. However, I didn’t know how quickly I would become entranced by this game. I had originally planned to beat it over the course of a few days, but after switching off and taking a break I found my thoughts wandering back to the world of the game.

You play as the last hunter, who travels to an island full of ancient structures and gods who have been cursed by the Godslayer. Your weapon is a simple bow, and you’re soon joined by an eagle companion who helps you jump higher, glide, and solve puzzles.

The thing that struck me right away with this is the incredible sense of movement. When you hit a target with your bow, you get a small speed boost and can literally run like the wind, gliding over terrain. It’s exhilarating.

Besides the bow and bird, your only other real equipment is a visor that, when worn, lets you speak to ghosts to get some lore and backstory as well as ping important locations. Some of these spots have items you will need to progress through the game, but there are also crystals that can be used to extend your jumps, allowing you to reach greater heights to access even more areas. Even though you only need a small number of trinkets to reach the next area, I loved exploring and finding every single thing that I could. You are also rewarded with stat boosts for finding all of the trinkets in an area, giving you the incentive to do so.

There are no enemies in the game, save for the 4 bosses (and final boss of course). Each starts as a swirling hellfire storm that chases you around the map. You can see it coming from quite a distance and is generally easy to avoid. If caught, you then have a sequence where you must hide from the monster and reunite with your bird, who will clear away the storm. Afterwards, your bird will need to be pet in order to remove the fire and ash from its wings. I found this quite a cute mechanic, and I never had to do it enough times for it to become annoying. I also quite like birds so I’m a bit biased! If you get caught, you lose some crystals but do not die. I can appreciate that because I think if you had a “Game Over” or respawned, it would take you out of the world a bit. 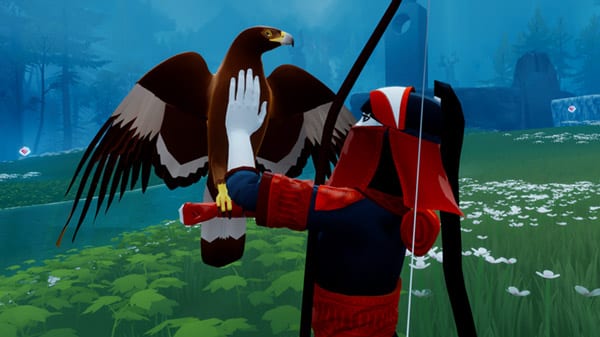 Another aspect that I quite enjoyed is the lore building. The thoughts of ghosts you encounter were clearly things they thought about before dying, and as you play you can piece together what happened on the island from these and various other legends about the gods themselves. It’s not a complicated story by any means but it’s told well. Each area worships its respective god and is reflected in the architecture, legends and temples spotted around the region.

Your main goal in The Pathless is to clear away a curse, and you do this by activating three pillars in each region, which locks the boss in place so you can then go fight it. As well, after the boss has been locked in place by the light of the pillars, you can explore without the worry of it chasing you down.

The battle has two phases. The first one involves chasing the boss through a fiery version of that area, hitting their eyeball weak points. This is another spot where the movement I mentioned comes into play. You truly do feel like a hunter closing in on your prey. This is followed by a more arena-style battle that differs each time. These were also quite fun, figuring out the bosses patterns as the music swells to make it more exciting. 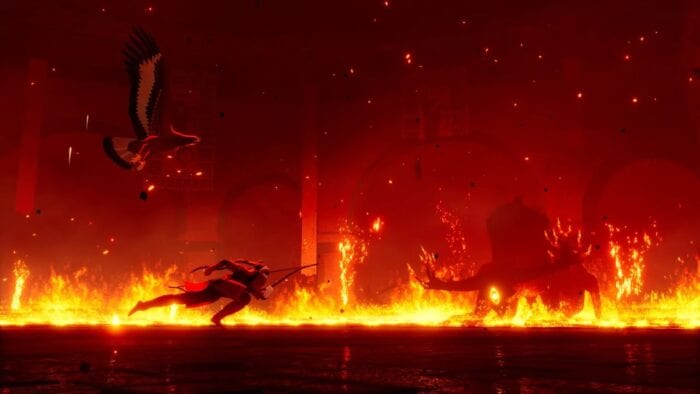 Speaking of music, the soundtrack was composed by Austin Wintory, who also did the music for Flow and Journey. Wintory got help from the Alash Emsemble, who bring traditional Tuvan throat singing and instruments, including the igil, murgu, and doshpuluur. This adds such a wonderful audio storytelling angle. Is this the music the people of this land would play to honor their gods? It certainly sounds that way to me. It’s never intrusive and fits the setting of the game perfectly.

There is a lonely quality to the game as well. There are no NPCs, just you and your bird. This land has been long abandoned, the rich history crumbling to time. By clearing each region of the curse, you bring life back. It was quite lovely to see areas that once lacked color awash in new plants and animals returning.

Most of the puzzles involve having your bird move weights on to switches and carefully aiming your arrows to light lanterns. I never had a puzzle I gave up on, but they did feel like they had a good difficulty spike as you got further into the game. It felt fairly intuitive to figure out, and the arrows do seem to lock on to targets once they are close enough, so as long as you’re facing the right direction you should be fine. There was only one puzzle I got a little stumped by, and it was such a silly thing. I didn’t think my arrow would continue to be on fire after passing through a waterfall. But, it’s a video game, so it did.

My only complaints are very minor. Sometimes my bird would get sort of “stuck” on a structure and I had to lead it around to follow me properly. Also, I do wish there was a tiny bit more to the ending. There’s a very nice “We did it!” type of thing, but I would have liked to see the results of my hard work breaking the curse into effect. I can see why it would not, as that is not really the point of this story, but I digress. 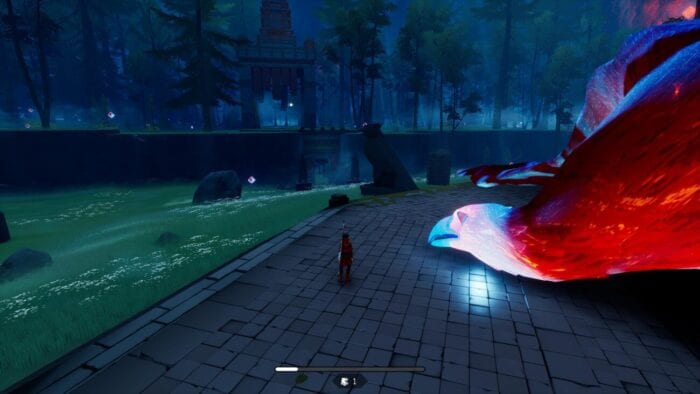 The game length is also quite welcome. It took me about 8 hours total playtime (and I know I didn’t get absolutely everything). You can probably beat it in around 6, but it’s a good time and I recommend going at your own pace and soaking in the game’s world.

Overall, I’m very happy to have had this be the first game I played to completion on the PS5. Beautiful environments, gameplay and music. It helped me get comfortable with the new system and I cannot wait to see what Giant Squid creates next. The Pathless is also available on the Epic Game Store, Apple Arcade, and PlayStation 4.