S3E8 of Star Trek: Discovery, “Sanctuary,” has a little bit of great content for everyone who cares about the series. The main plot centers around Michael Burnham (Sonequa Martin-Green) and Cleveland “Book” Booker (David Ajala) traveling to Book’s home planet of Kweijan in an attempt to help out his “brother”. But we also spend a lot of time with most of the main cast.

Georgiou and Culber get their own plotline. As do Stamets and Adira. Saru and Tilly get to work on actual command based activities. And Lieutenant Detmer not only gets a subplot, on her own, she gets to make a trench run against the “Death Star”. (In this case the “Death Star” in question being Osyraa’s ship.)  Maybe that last part wasn’t exactly the most “Star Trek” thing ever, but it did look cool and continued to round out the character. “Sanctuary” also tied all of the various plots together throughout, which really helped to make all of them seem more vital than they would have been separately.

The main plot with Burnham and Book is actually interconnected to everything else going on on Discovery, for once, because they finally made the right decision and asked for permission to visit Kweijan after receiving a distress call from Book’s “brother”, Kyheem (Ache Hernandez). Admiral Vance (Oded Fehr) then agrees to let them go on the mission, with Discovery taking them and staying around strictly to “observe”.

The Starfleet protocol has become—due to the circumstances of “the burn”—that they do not intervene in situations like what is happening on Kweiljan. According to Vance, the Prime Directive apparently still exists as well, at least conceptually. It turns out the villainous group “the chain” which has been behind many of the atrocities we have seen so far, is also exploiting pre-warp civilizations and has as little use for the so called “directive” as most episodes of Star Trek.

All of this means that, once the mission on Kweiljan inevitably goes haywire, Captain Saru (Doug Jones) gets to stand up for real Starfleet ideals in the face of danger. The show also really puts Tilly (Mary Wiseman) to great use in her new role as Saru’s “Number One”. She comes up with the plan that will allow the ship to follow the letter of Vance’s orders, even as they are blatantly breaking them in the face of doing the right thing.

This type of fun needle threading logic and playing within the rules of the universe is a great way to avoid the pitfalls like when Burnham went rogue earlier in the season. Tilly is also adept at working with Saru on his catchphrase, which is super cute, even though it is clear that the choices so far are not going to work for him.

Osyraa (Janet Kidder) has been established as a bit of a big bad for the season and she definitely jumps on the scene with a really evil standout performance here. She has quite a few moments, even if they are all delivered via hologram. Early on, she murders her nephew, who had come sniveling back to her after being defeated in “Scavengers”. Then she attacks a wide swath of the planet, presumably intent on killing everyone until she gets her hands on her prey. And finally she gets to give a classic “you will feel my wrath upon my return” speech before warping away.

Osyraa is a pretty one dimensional villain so far, and the entire “Chain” season long arc is the least interesting thing on the show, but Kidder really sells the evil to such an extent that it is possible to root for the character’s return. Even if it would be pretty exciting to see her have some depth added to her arc next time.

Lieutenant Detmer’s plotline doesn’t necessarily give her more depth. Owo (Oyin Oledejo) established long ago that Detmer’s main characterization is “macho pilot”, and this plotline is  definitely more of the same. But it does give her a chance to really show off her skills, as she pilots Book’s ship right into the teeth of Osyraa’s weapons and eventually “goes manual” to take out the gun turrets.

It is a really cool series of moments, though the “Death Star run” homage is a bit on the nose, even as far as those go. This also gives some really fun comedic moments to Grudge, who is (reluctantly) still on the ship, and Ryn (Noah Averbach-Katz), who has come along to show Osyraa’s weak points. Ryn stood up to Osyraa and she cut off his antennae and made him a slave as a result. Yet by the very act of standing up to her he did something that people have been afraid to do for generations. Ryn’s rebellion was quiet, but it seems it hit Osyraa hard and now he looks to be a key figure in her undoing. The Chain has had such control over everyone for so long that even the smallest rebellions have been stamped out, and because of that Ryn represents a great failure not just to Osyraa, but to the entire group.

He is also still very undefined as a character and it would be nice to see him get enough focus so we can understand what his real motivations are. It is clear that he will have a central role to play in ultimately taking down Osyraa and the Chain, and my wager would be on his demise during that battle, but he has already defied expectations and survived once, so it is possible he may be able to pull it off again. 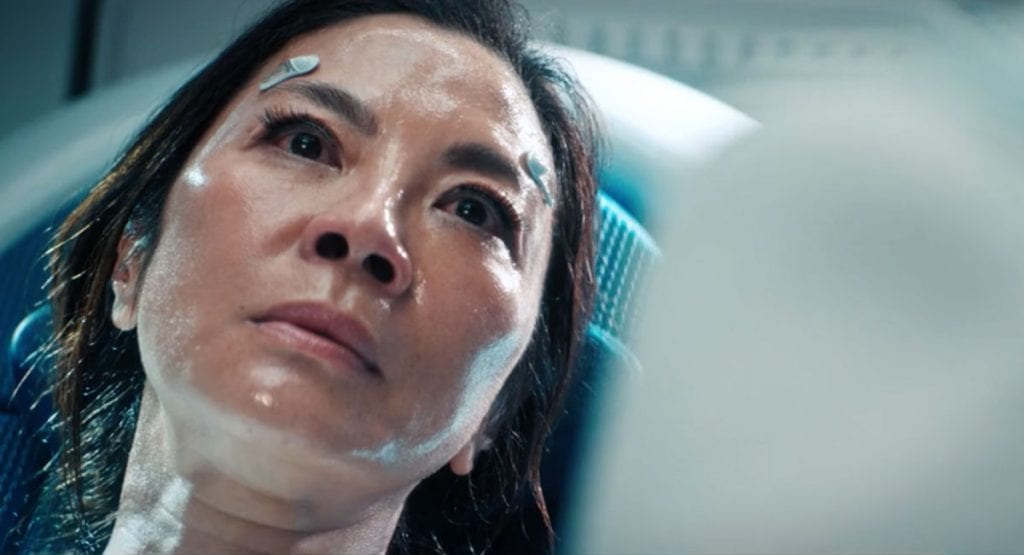 The weekly check in with Georgiou’s (Michel Yeoh) illness also gets a much larger spotlight than usual in S3E8. Dr. Culber (Wilson Cruz) spends most of his time trying to keep Georgiou from literally falling apart. We don’t really get a better sense of what is wrong with Georgiou, that seems to be the story for next week, but we do get a sense that it is serious, and that Gerogiou can’t beat it by pure snark.

Culber and the medical staff at least get Georgiou tested and we get a much longer series of flashback memories of what is happening to her, but not enough to tell what is really going on, before her body seems to pixelate. I think all of this is going to lead to a big revelation about her, my current theory (with no information or evidence) being that she is actually a hologram and the real Georgiou is still in the past.

Since Culber is the Chief Medical Officer he has been treating Georgiou but his main connection is still to his husband, Stamets (Anthony Rapp). These interpersonal dynamics allow for the Georgiou plot to connect to the Stamets and Adira plot too. Adira (Blu Del Barrio) has been tasked with figuring out how all of the information they have collected on “the burn” connects together, and Adira is up for the task, eventually. But first, we finally get the moment where Adira comes out as gender neutral and it is well played in its subtlety. Stamets uses feminine pronouns when describing Adira to the captain and Adira seems to recoil.

Later, they tell Stamets that they never felt like a “she” and would prefer to be called “they and them”. Stamets’ response is also great, he simply says “OK.” Obviously all of this is a much larger deal for people in our time than in the in-universe future where these characters live, but that is the essence of what Star Trek is supposed to be. The franchise is a place where the ideals of our world can hopefully be made closer to a reality simply by the fact of them existing in the future.

This simple, subtle, moment is incredibly important not for any sense of plot or even for the meaning of having a gender neutral character (and actor) featured on a show. It’s important because it shines a light on how someone saying who they are should be a personal decision and a natural one. Both Del Barrio and Rapp also play the moment, and their whole scene, with a quiet sincere realness that I think is a real testament to hiring actors who actually have experience with these personal and sometimes difficult revelations about themselves. 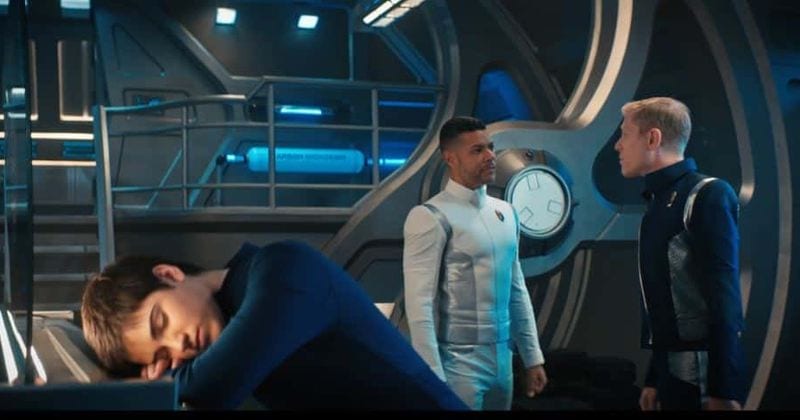 The two plots converge when Culber and Stamets bond over a resting Adira later. Georgiou had tried to slam Culber with a classic barb about killing his family, but his response, “I wish I had the time to have children” sets up the end of the Adira plot. It seems Culber and Stamets are basically adopting them as their teenage child.

When Stamets puts his uniform jacket over Adirea and he and Culber kiss, it is a really sweet scene between the three of them. The little found family manifesting within the larger family of the Discovery crew. Though it was the one moment where it felt as though the show was manipulating the dialogue a bit too much to shine the light on Adira’s gender neutral pronouns.

As they work to save his planet and escape the treachery of his “brother” (before he comes back to his senses) Book and Burnham’s relationship is also highlighted. They are very much still together. (Which seemed clear to me last week but has been widely confusing for fans.) They are also really cute together and seem to actually be in love. At the end of the episode Kyheem brings his son, Book’s “nephew” onto the ship and the theme of found family is reinforced once again.

These emotional and family connections are the real through line of the whole episode. Book decides not to stay with Kyheem and his family though. It seems the show is setting him up to actually join the crew. I do have some questions about how that would work. Can he really just join the Discovery, Neelix style? Will Admiral “Grumpy Pants” Vance even allow such a thing? Isn’t Discovery a part of the Federation simply by their own will, so could they even be stopped from bringing on Book if they wanted to do it?

There are questions about the burn to answer, and thanks to Adira’s work they now know where the burn started, and that in the center of the activity there is a Federation distress signal. Are we headed for classic time-loop insanity? It certainly seems so, but we will need to wait to find out for sure.