I’m a fan of heist and mob movies, so I’m quite familiar with the actor Vinnie Jones, who is probably best known for starring in several Guy Richie films including Snatch and Lock, Stock, and Two Smoking Barrels. Jones stays true to form in this film, which, in the beginning, is reminiscent of Richie’s movies but doesn’t continue to be quite as engaging.

The film opens when two London mob bosses and their crew descend on West Virginia’s Appalachian Trail in hopes of breaking into the oil industry to launder dirty money. We’re introduced to Neelyn (Vinnie Jones) as a heavy when the plane lands and the first order of business is killing a man. But why? The audience is never clued in—and thus begins a convoluted film that is enjoyable but offers many plot holes.

Next, we are introduced to the American who everyone has traveled so far to meet, Preston (Ron Pearlman), an enigmatic man who most in the small town seem to respect. Out of nowhere, the movie tries to set up his character by having him deliver a monologue on American history, the confederate flag, and treating the land and its residents with honor and respect. This is a big “huh?” moment. One of many.

The action begins when, after a night of heavy drinking, Neelyn finds that his girlfriend, Fiona (Lenora Crichlow), is missing. His boss and best friend, Harris (Malcolm McDowell), who is at the helm of this business venture, comes banging on the door telling him he must immediately leave for London for a meeting, but he won’t leave without her. The fact that he won’t leave without her is a little weird because their relationship doesn’t seem to be all that deep. We aren’t clued into why he needs to go from West Virginia to London and back in such a hurry, and there seem to be no ramifications for him refusing to go.

Neelyn returns to the bar where everyone was partying the night before to ask the bartender if she has seen Fiona. The bartender hands him a cell phone and wallet that was found in the lady’s bathroom and on it, there is a desperate voicemail message from Fiona saying that she is lost. Your guess is as good as mine as to whom this phone belongs, and we’re not really told.

This is where things seem to go off the rails even more for this film. The bartender, who met Neelyn minutes ago, offers him her father’s old truck and some clothes so he can “blend in” and so he can search for Fiona. He takes the truck and drives into the middle of nowhere where he finds her purse laying in some weeds. We can only surmise that he was able to track her cell phone and that’s why he so easily picked up on her trail. He walks a little way down the river—how he knows which way to walk is a complete mystery—and almost immediately sees her body floating in a shallow section of water. He pulls her out and buries her just off the trail. Neelyn is obviously going to seek revenge for her murder and he heads back into town to look for Preston’s son, Junior (Brandon Sklenar), who he was told Fiona left with the night before. 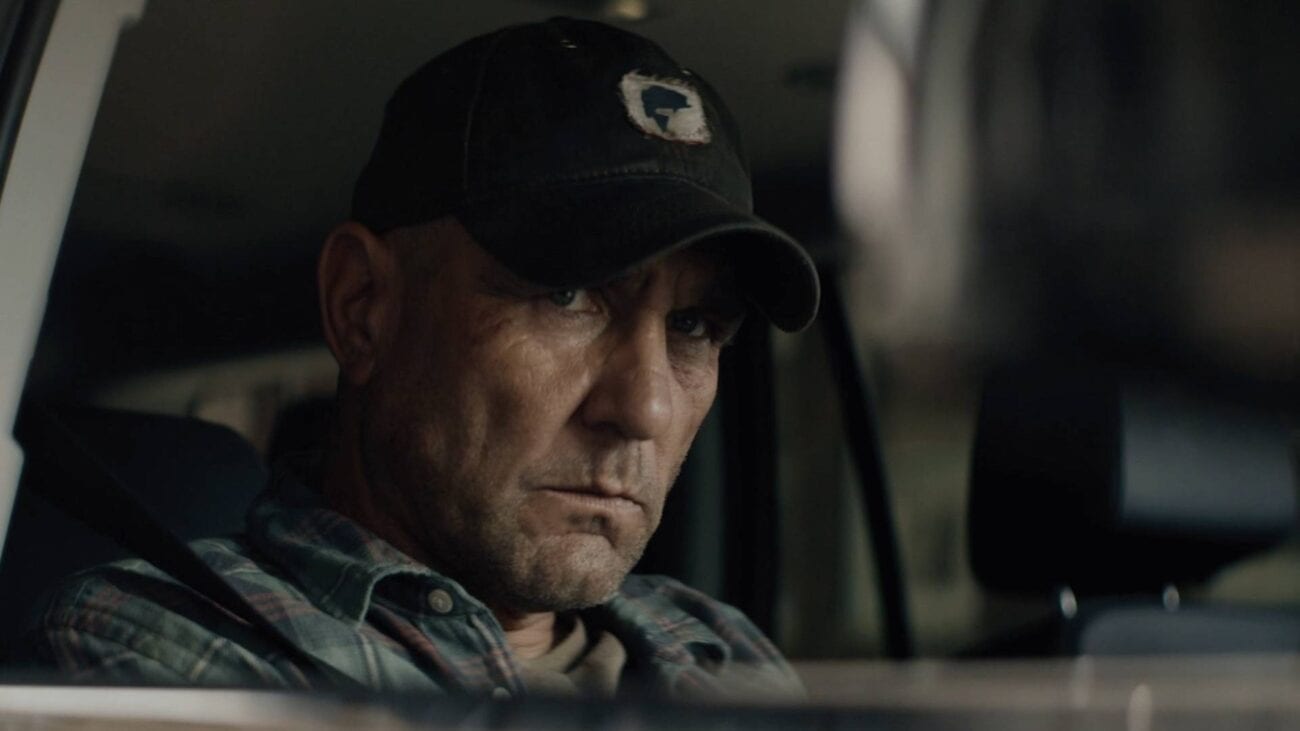 When Neelyn reenters the bar (because that seems to be the only place in town where one can find someone), we see that he’s not all brawn. We’re clued in on his humanity when he purchases a beer and a shot for a stranger who is obviously in need of something to calm his nerves and ward off the alcoholic tremors—this exchange ends up being lucrative for Neelyn later in a bizarre scene at the end of the film. This giving demeanor changes when Junior enters and Neelyn asks him about Fiona after seeing a scratch on his face. A fight ensues where Neelyn seems to take a dive to let Junior think he’s gotten him beat. Once Junior shows how cocky he is, Neelyn finishes the fight by bashing him in the face with a rock leading to a stint in the local jail. 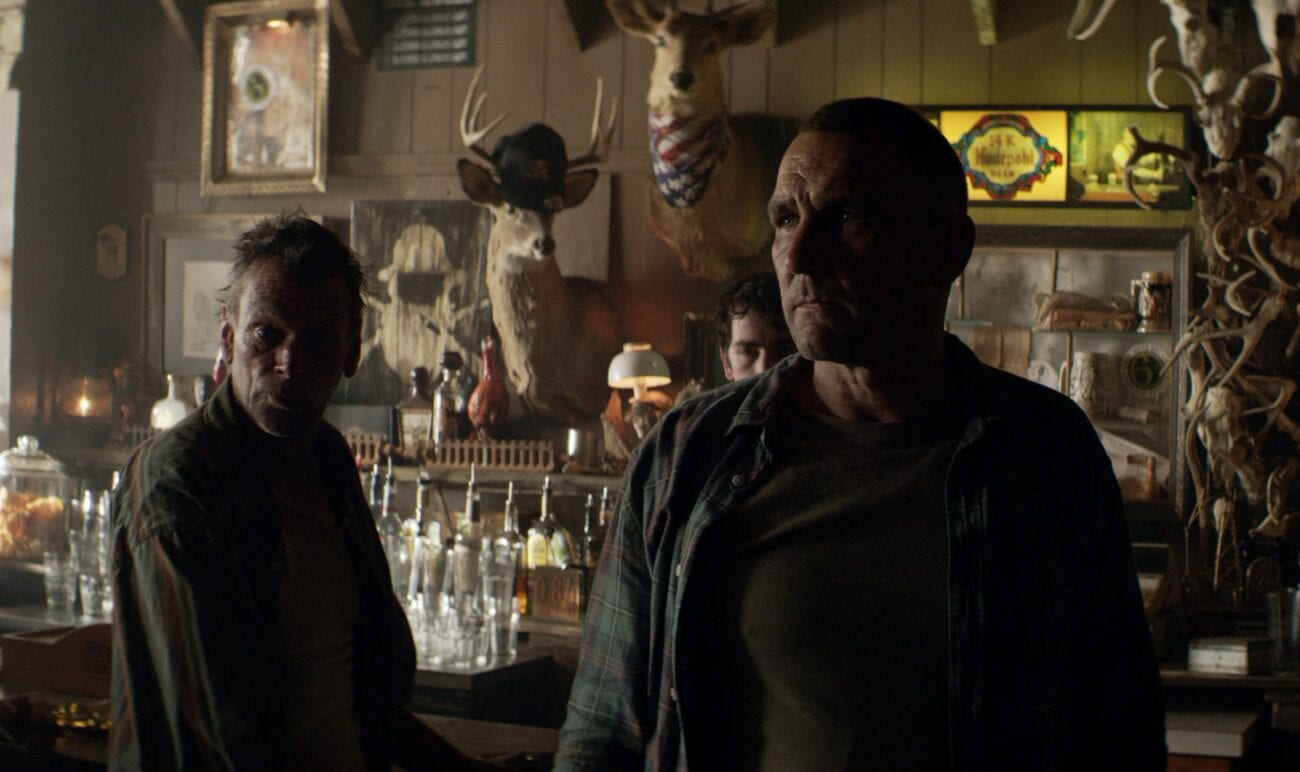 Soon, Neelyn is moving around town gathering soldiers for his war against Junior. His recruits include Will (Nicholas Braun), one of Preston’s top men and Junior’s babysitter, and the lady bartender. In a strange twist, Preston turns against his own son—his only family—in order to save the oil deal. Now, we know that Preston is a man of good character, or at least that seems to be what is set up in the beginning of the film. But, for him turn on his own son for the sake of a business deal seems odd even if he knows what type of person his son is. Meanwhile, Harris holds Neelyn at gunpoint which also seems incredibly out of character. Why would Harris want to kill his best friend over an oil deal when the deal being in jeopardy had nothing to do with Neelyn’s actions? And why take the side of an American that he barely knows? Where’s the mob loyalty in that?

The movie spends a lot of time setting up the idea that Junior may be a sociopath. However, it doesn’t spend enough time setting up the story of why these mobsters have come from London to set up an oil operation in the middle of West Virginia or how they came to be in business with Preston. There is a short dialogue in the film’s penultimate scene when Preston tells his main man, Milt (Bruce McGill) how he met Harris. The story doesn’t honestly make much sense—he tells Milt that his wife was killed by a drunk driver while on an anniversary vacation in London. To make it right, he was put in touch with Harris who murdered the man for him.

This makes little sense because Harris and Preston didn’t know each other at all. Why would a London mob boss murder someone over an accident for a complete stranger? The explanation makes even less sense—because he wanted to be friends and maybe learn the oil business someday. Sure, that’s entirely plausible that a powerful man who is willing to murder someone in cold blood would do a favor like that for a stranger simply to become friends (insert heavy sarcasm here). What makes this explanation even stranger is that Harris confronts Preston regarding his plans for Neelyn and Preston challenges Harris to kill him saying, “you know you’re no match for me, brother.” If Preston is so much more powerful than Harris, why would he need Harris to do his bidding in London? Yet, the tables are on even ground when the two men kill each other at the exact same time in a strange display of machismo.

The struggle between the West Virginian good old boys and the London mobsters culminates in a showdown between Will and Junior. Will has finally had enough of the life he’s been living and stands up to Junior, saving Neelyn in the process of saving himself. To get revenge, Preston doesn’t go after Will. He goes after Neelyn. Yet, Neelyn has set it up so Will is able to flee town with his girlfriend, Kara (Leven Rambin), and while Will and Kara are riding off into the sunset, the man who Neelyn purchased a drink for in the bar kills Preston to save Neelyn’s life. For such a tough guy, he sure does need a lot of saving. However, it doesn’t seem to matter because the residents of the town are moving in and we hear shots fired, leading us to believe that he has paid for his sins.

Despite its flaws, the movie does hold the audience’s attention and offers some fun moments and commentary on what constitutes loyalty, love, and honor. The performances by Jones, McDowell, and Pearlman are nothing short of spectacular, which is what viewers have come to expect from these men and what probably saves this entire project. If you don’t think too hard about continuity or human relationships and how they come about, this movie does offer an enjoyable way to pass the time. Just don’t expect to be blown away.