The following contains spoilers for The Expanse S5E1 “Exodus” and assumes knowledge of all preceding episodes and seasons of The Expanse, but contains no book spoilers.

Season 5 of The Expanse premiered on Amazon Prime on December 16, 2020 and it’s immediately a bright spot in an otherwise…well I can’t describe this year in one word! We’ve been gifted Episodes 1 through 3 this first week, with the remaining episodes of Season 5 to be doled out week to week moving forward. I have decided to take virtual ink to paper after only having watching S5E1 to provide an analysis of the episode, with the plan to continue throughout Season 5 on an episode by episode basis. So, to be clear, as of this writing I have not watched S5E2 or S5E3 even though I know you probably have. Going episode by episode makes more sense to me at least for posterity’s sake, so bear with me. And since I’m spending a paragraph on preamble anyway, I’ll let you know that I haven’t read the books The Expanse is based on. If you’re looking for analysis more along those lines, you might be interested in Ryan Lucia’s piece on Season 4. What you will get from me are thoughts and analysis of The Expanse as a TV show and please feel free to nerd out in the comments to tell me things I don’t know (but not about episodes later in the season please!). With all of that out of the way, let’s get to it!

The Expanse Season 4 ended with the Rocinante crew leaving Ilus behind with Murtry (Burn Gorman) in tow. Holden (Steven Strait) had made Amos (Wes Chatham) promise not to kill Murtry prior to this, but the last we see them the two were about to fight, so maybe Amos killed him? He certainly wanted to, and there is no word in S5E1 as to what happened to Murtry beyond a shot of his bag in Amos’ possession. However, if Amos did kill Murtry, one would expect that Holden wouldn’t be too happy about it, given his desire to bring the man to justice. Yet that could track with the way in which Amos is off on his own in S5E1, visiting Earth for reasons that I am sure will become clearer as we proceed.

Avasarala (Shohreh Aghdashloo) lost the election in S4E10, making way for Nancy Gao (Lily Gao) to open up exploration through the Ring, and received a call from Bobbie (Frankie Adams) after the latter escaped an ambush on Mars. Naomi (Dominique Tipper) had asked Fred Johnson (Chad L. Coleman) for help in finding her son Filip (Jasai Chase Owens), who we learned definitively has indeed been working with his father Marco (Keon Alexander), and Season 4 ends with the cliffhanger of an attack they have been planning on Earth, though we remain in the dark about the details. And they threw Klaes Ashford (David Strathairn) out an airlock. I’m just glad that at least Drummer (Cara Gee) quit and didn’t go with him.

S5E1 “Exodus” begins with the Inaros faction attacking a science ship near Venus that had caught sight of anomalous asteroids heading towards the planet. It’s not entirely clear what they’re up to, but it would seem that what they are interested in stealing pertains to the data that the ship has collected, so my inference is that this is a matter of keeping information from getting out about their planned attack, though I can’t help but wonder if there may be even more to it than that. Regardless, they are ruthless in killing the members of the science team—innocents if there are any in the world of the The Expanse—and in sacrificing one of their own number in order to pull it off.

I was happy to see Season 5 begin in this way because the interplanetary politics of The Expanse have always been the most intriguing part of the show to me. The protomolecule is interesting, sure, and I am very curious to see what we may learn about it in the coming episodes (more on that later), but it seems that central to the plot of Season 5 will be the question of Marco Inaros, who was a relative unknown earlier in The Expanse despite his history with Naomi (which also begins to come to the fore in S5E1).

What do we make of his politics? On the one hand, it is easy to sympathize with the position expressed by Ashford in Season 4—finally there is a chance for peace and prosperity for the people of the Belt, violence only begets violence, and so on—but there is also clearly something to Marco’s position that peace and prosperity were always possible. The resources always existed for the Belt, but were stolen from it. The Inners have been exploiting the Belters since the beginning. In fact, one could argue that this has been the whole point.

If we imagine the back history of the world of The Expanse, it seems clear that meaningful exploration of the Solar System kicked off in relation to the exploitation of the resources to be found in the asteroid belt. But that meant creating a class of laborers to do the work, and of course it follows quickly to have them live there to avoid the costs of transportation etc. In other words the Belters are a people who were created through their own exploitation. A whole culture arose through their experience of what Marx would call alienation, as they are separated from the products of their labor and thus separated from themselves such that their very knowledge of themselves is now mediated through their class struggle. The wrench thrown into Marx’s story, however, is that even if the Belters possess class consciousness, they have always been limited in terms of their power because their economic base has always relied on the Inners.

They are a class somewhere in between the proletariat and slaves, and so the appeal of the kind of position expressed by Marco should be evident. Plus, we can already see that he has a point from the events of Season 4. The Ring has opened the Solar System onto untold new planets and yet the Inners still seek to control who gets to go where. They seek to continue their dominance over the Belters. There is only a treaty insofar as the Belt has become strong, and Marco wants to push that strength.

Of course, if he is successful many people will die. S5E1 shows us the memorial for the Augustin Gamarra, which Naomi helped Marco to destroy. She feels guilt about that because she can’t see how a political vision could warrant such loss of life. And she’s right, but when the powers that be in the world engage in violence and exploitation in order to subjugate the vulnerable, are we so sure that Inaros is wrong? Perhaps morality is just a lie the powerful tell us to keep us from rebelling and everything is, in the end, a power struggle. And if everything is determined on the basis of power, what choice is there but to fight for you and yours?

Or do you prefer the move someone like Fred Johnson (Chad L. Coleman) wants to make, holding the protomolecule—which has already threatened the species with its destruction and holds untold and unknown dangers for the future—as a bargaining chip? 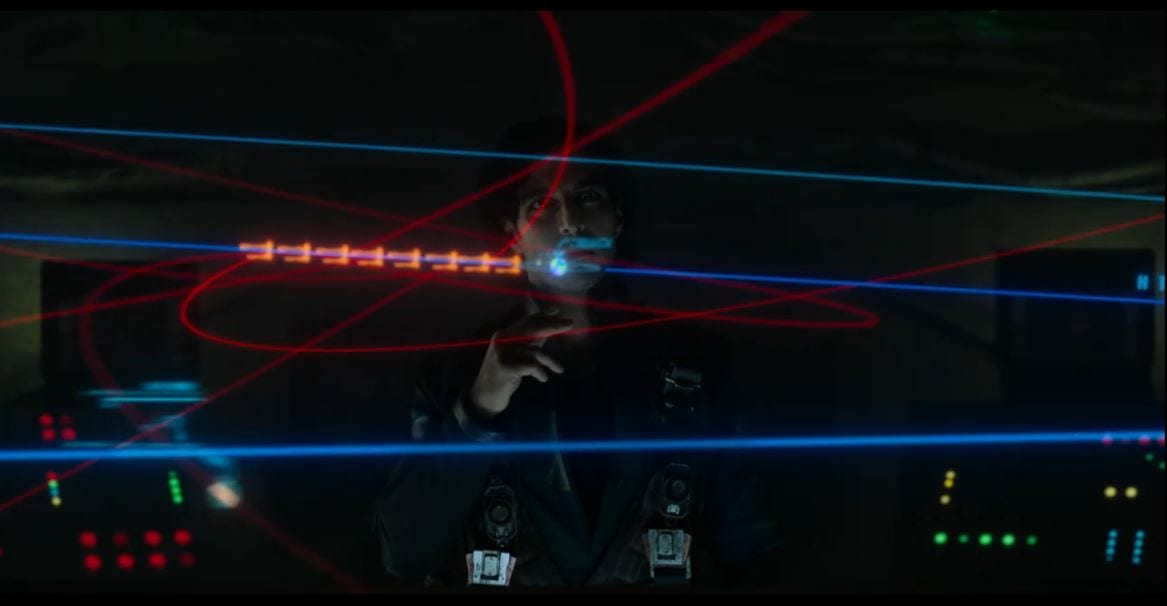 As for the protomolecule, the way that Holden talks to Fred Johnson about it in S5E1 strongly indicates that we aren’t just dealing with something alien here, but something interdimensionally so. Apparently Dr. Elvi Okoye (Lyndie Greenwood) has had experiences since she helped Miller (Thomas Jane) on Ilus that bear resemblance to Holden’s. And it’s not just that they claim to sense beings in a dimension that most people cannot access—Holden tells Fred in no uncertain terms that these beings are angry and getting angrier.

All of this is very intriguing and I’m sure will be tied up in The Expanse’s endgame, though I can’t guess how. Personally I hope everything remains sufficiently mysterious, but some answers (or at least the next clue in the case) would be more than welcome. I’m still not entirely sure what was going on with Miller and not-Miller on Ilus, and while that’s all well and good when it comes to a mystery about how to resolve questions of personal identity, a little more clarity with regard to the parties involved would be nice.

There is a metaphor here, or an allegory I should perhaps say, related to how humanity cannot help but remain tied up in its own sh*t even in the face of a game-changing threat and an opening onto the great unknown—full, as Donald Rumsfeld might say, of “unknown unknowns.” But what exactly the allegory is, and what lesson we might learn from it, is something that I expect will continue to unfold over the remainder of The Expanse.

But again, it is the interplanetary dynamics that intrigue me most about The Expanse, and S5E1 gives us an entry point into what is happening on Mars both through Bobbie and through Alex (Cas Anvar), who is visiting the planet.

This is the dream of going to a new planet and building it into a new home. With Mars it took terraforming and work that spanned generations. This fed into the Martian ethos that has been on display since Season 1 of The Expanse, but which we have seen in decay at least since Season 4—a work ethic and sense of community that is degrading into individualistic opportunism.

The dream of Mars was to be a part of something—the truly spectacular feat of human beings transforming an uninhabitable world into one of their own—but what we’re seeing is the extent to which it was propped up through its uniqueness. One can take pride in Mars and the work generation after generation of Martians have done to create and sustain it, but what happens to that pride when now a similar dream is on sale more broadly, and is seemingly easier to achieve?

Among other things, this has led to the crime and black market dealings we saw Bobbie engaged in with Esai (Paul Schulze), which she continues in S5E1 but now in the hopes of getting to the bottom of what’s going on. This connects, of course, to Marco’s plans, as he has gained Martian stealth technology and who knows what else exactly by exploiting this crack that has appeared in the society of Mars.

But as S5E1 comes to a close, it seems that still no one beyond the Inaros faction knows precisely what they are planning. I can’t help but think they will succeed, and the damage will be catastrophic. Unless maybe Naomi can do something…what will happen when she reaches Filip? I can’t imagine he’ll greet her with open arms.

More From: The Expanse