There was a time when Guns N’ Roses were the most important Rock Band in the world. Before the bloated 13 minute songs. Before the riots and the Axl no shows. Before the self-indulgent double album release and the 16 years wait for their follow up. G N’ R stood astride the music universe like a colossus, and for a few glorious moments, they proved that rock was far from dead.

That time was 1987 and music was at an all-time low. Without the likes of Iron Maiden or Motorhead, there was hardly anything worth listening to. All the bands that were being discovered weren’t worth the vinyl they were flooding the market with. Outside of Motley Crue and Hanoi Rocks, everything else was just a mass of teased hair and power ballads. Or songs about stealing the keys to your daddy’s car and heading to the beach to check out the chicks. Which, for a young 15-year-old me, was about as likely to happen as a night out with Sam Fox.

If the scene wasn’t dead, it sure as hell was on life support, just waiting for someone to pull the plug when all of a sudden, word started spreading on this new band out of L.A called Guns N’ Roses. Thanks to the British Rock Bibles, Metal Hammer, and Kerrang, a buzz started to grow around their EP Live Like A Suicide, but this was England in the late 80s, and unless you lived in a big city then the chances of finding a copy on import was rarer than unicorn s*it.

I lived in the ass-end of nowhere. Yet through a friend of a friend of a friend kind of deal, I managed to lay my hands on a taped version. It must’ve been the thirtieth copy of a copy, and it was of such low quality that I had to have my stereo cranked up to 11 to hear it, but it didn’t matter one bit. From the first moment I heard; 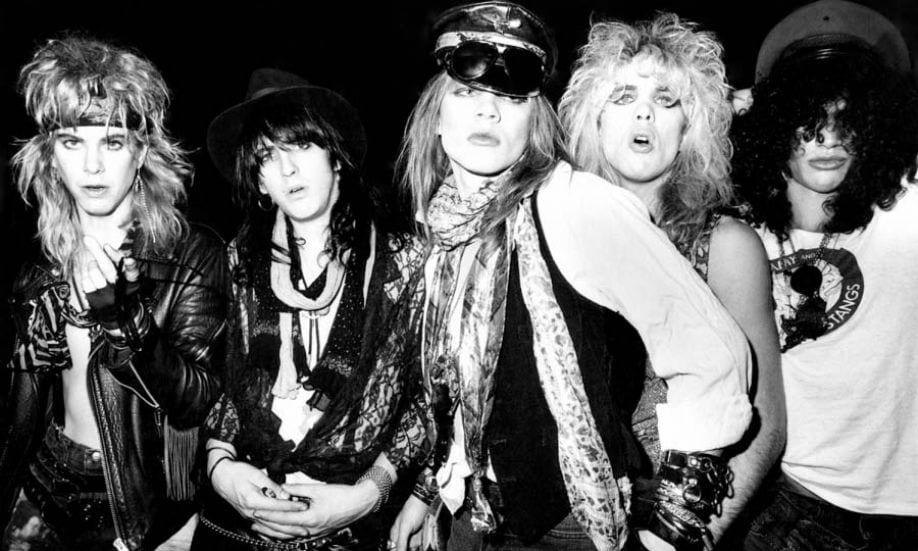 “Reckless Life”, “Nice Boys”, “Move to The City”, “Mama Kin”, there wasn’t a bad track on the entire thing, and it was played with such a passion and a fury, I thought it was going to rip my speakers off the wall. I was converted to their cause, and I devoured every piece of information I could find on the band. When Appetite For Destruction was released, I was down the local record store for their 9  A.M opening time to pick up my preordered copy.

It was f*cking glorious. If Live Like A Suicide had been a taster of what Guns N’ Roses had to offer then the debut album was a full-blown banquet with as much food as you could eat and as much Jack Daniels as you could throw down your neck. In fact, it still stands up today, nearly 23 years later, as one of the greatest records of all time and it’s only ‘Sweet Child O’ Mine’ that hasn’t aged very well. However, this is more to do with it being played to death than there being anything fundamentally wrong with the track.

But it wasn’t just the rip-roaring rock n’ roll that made this rag-tag bunch of misfits such an attractive proposition for teenagers the world over, who were looking for even bigger ways to p*ss off their parents, they looked the part as well. Where a few months previous I’d been mocked for showing up at school wearing a cut-off denim jacket, a band t-shirt, a pair of jeans, and some trainers when Appetite For Destruction took off, you couldn’t move through those hallowed corridors without barging your way past a half dozen Axl clones, bandana and all, every 20 feet. We even had one guy dressed like Slash, including top hat, but that lasted about a week before his folks caught on and gave him an ass-whupping that changed his mind about his recent fashion choices.

We didn’t care about the posers though. No matter how much they tried to dress like the band, no matter that they had inexplicably decided we were now cool enough to talk to, we knew that to be part of the life you had to live the life. And, with the exception of Lemmy, nobody embodied that more in our young minds than Guns N’ Roses.

If you’ve read any of the three autobiographies available to you, then you’ll know that not only did the band live life to the ultimate debauched extreme’s, but that’s it’s a f*cking miracle they all survived. They snorted, shot up, and drank everything that they could lay their hands on, legal or otherwise, and it took a heavy toll. Slash has overdosed so often that he’s probably got a loyalty card to every hospital in America. Duff drank so much that his goddamn pancreas exploded. And Steven Adler stuck so much s*it into his system he suffered a stroke, aged just 31. Izzy and Axl didn’t get off lightly either with the former spending many years battling a heroin addiction that would’ve ended other mortals in around a third of the time while Axl was a walking rattle of pills used to combat his manic-depressive disorder.

Yet, at least for a few glorious years, they were a gang who always had each other’s backs. They’d fight like cat and dog, as recounted in this fascinating piece from Rolling Stone magazine, but they’d always sort it out in-house, and the next day, it’d be like nothing ever happened. After all, this was the band who formed and then thought “F*ck it, if we’re gonna play some shows, we might as well go out on tour” and that’s exactly what they did. With no album, no fan base, and no-one having a clue who the f*ck they were, Guns N’ Roses booked a series of shows and hit the road. Which would’ve been great if the car they were using hadn’t broken down just outside of L.A. Now, most other bands would’ve said “Screw it”, turned around, and gone home, but not Guns N’ Roses. Instead, they chose to head for the final show they had booked, blowing off every other date they had planned, and hitchhiked all the way to Seattle. Still, things didn’t go swimmingly. After the gig, the club owner refused to pay them and it was only when he was threatened with serious physical violence did he cough up the kingly sum of $100. Which the band then proceeded to blow on getting wasted.

When I initially started out writing this piece, it was going to be filled with stories of their exploits during this period of their career, but as I went along I realized that wouldn’t work. First off, if I was just regurgitating all the tales from the tour bus that are easily available elsewhere, then that would make me nothing more than a hack. Secondly, I don’t have enough time and space to do that anyway as it’s taken Slash, Duff, and Steven Adler three whole tomes to attempt to recount their tales and I still suspect there’s about a library of content they’ve left out. And thirdly, Guns N’ Roses meant a lot more to me than five hellraisers who made some cracking music.

Don’t get me wrong, I’ve always had a soft spot for people who can trash hotel rooms while drunk out of their minds, but for a then 15-year-old lad who was trying to find his way in the world, they were another piece in the puzzle that was growing up. And, more importantly, they were mine. I was far too young to be there when Motorhead started out, and I was a couple of years off for both Hanoi Rocks and Motley Crue. Meaning that Guns N’ Roses were the first band I could say that I got in on the ground floor with. And it was glorious.

So I can forgive all the bulls*it that dogged them in the later years because, as far as I’m concerned, they’ll always be the band that gave me a reason to believe that not all new music sucked balls and that rock n’ roll was far from dead.