Like the other big horror sequel of 1986, Aliens, The Texas Chainsaw Massacre 2 aimed to escape the shadow of its predecessor by switching genres. However, the original Alien largely existed outside of the genre trends of its era, and while Aliens took a small sideways step into war movies, The Texas Chainsaw Massacre 2 had a harder task. The movie landscape of 1986 was far different from that of 1974, with the intervening years seeing a huge boom in slasher movies, almost all of which took their cue in some form from the original Texas Chainsaw Massacre. However, these derivatives had been getting progressively goofier, and although a Texas Chainsaw Massacre sequel could have been a welcome return to a more grounded and gritty form of horror, original director Tobe Hooper went the other way. The resulting film was one that embraced the silliness of his film’s babies and took the original film’s vein of jet black and sometimes satirical humour and placed it centre stage. The resultant film is more a straight parody of the slasher genre, one that never intends to scare its viewers, with the possible exception of one terrific jump-scare.

The film picks up 12 years after the events of the first film, with Lefty (Dennis Hopper), a former Texas ranger and uncle to Franklin, still on the search for answers, who finds his first real lead when the Sawyers murder two teenagers while they’re on the phone with a local radio disco jockey Stretch (Caroline Williams). This was the first of the Texas Chainsaw Massacre movies to lend some additional characterisation to Leatherface, with the original’s terrifying Gunnar Hansen here replaced by Bill Johnson with a distinctive waggle. Johnson’s iteration of the character is a far cry from Hansen’s unrelenting butcher’s boy, portraying him instead as the emotionally stunted runt of the Sawyer family. Upon confronting Stretch, he spares her when she awakens confusing sexual feelings in him, which his dysfunctional family then attempt to stamp out.

Jack Halberstam wrote a fascinating essay on the film, that canonised it as a seminal example of the proto-feminist slasher subgenre. Stretch becomes an interesting figure in this regard, never portrayed as explicitly sexually available though her body is prominent throughout the film; her denim shorts ensuring her shapely legs are always on display. She’s not above weaponising Leatherface’s sympathies, but never through compromising her sexual autonomy which is rock solid throughout the film, despite her initial confrontation with Leatherface playing out as a pseudo attempted rape allegory. She’s neither the prototypical virginal final girl, nor an object for audience gratification—be that gratification through sadism, masochism or eroticism. Rather, she emerges from the film somewhat as all of these things, though incompletely, and the success of this characterisation is as triumphant as the film’s magnificent final shot. 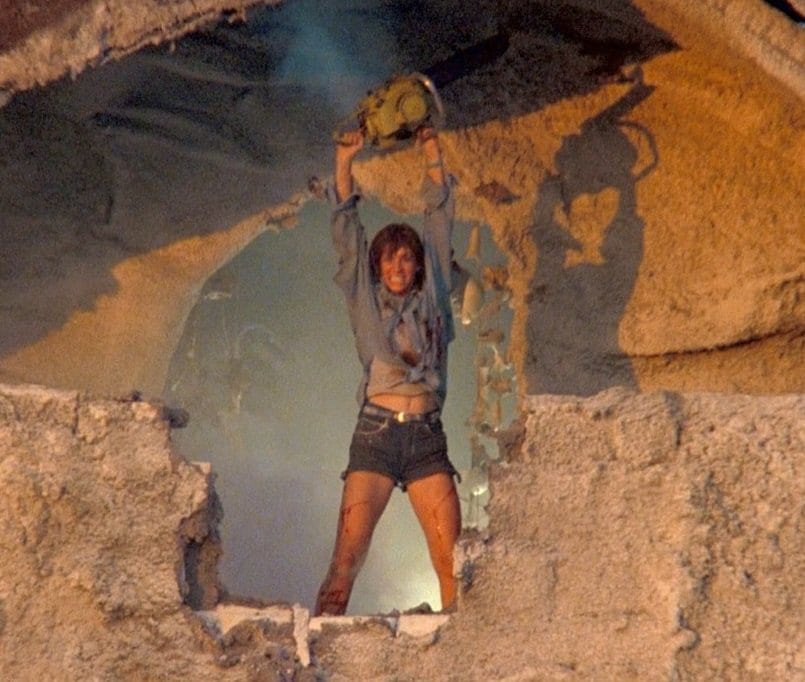 The other major point of interest comes in the second big theme: the film’s economic locus. In the first film, the Sawyers were a backwoods mess of rural dysfunction, inbreeding, and poverty, living richly by devouring those around them in a twisted, off-grid parody of their former financial support system, the local slaughterhouses, now long closed. However, the ’80s have apparently been kind to the Sawyers, who have moved into a disused carnival attraction where they have apparently prospered as the state’s favourite travelling chili cooks, selling (presumably human) meat to the unsuspecting public. The family patriarch Drayton Sawyer (Jim Siedow, the original’s only returning cast member) takes great pride in their financial success, in a wily parody of the brand conscious corporate climate of ’80s America.

So the film is far from without interest and unworthy of outright dismissal. It does rather baffle me how the comedic intent could have gone so unappreciated by contemporary critics, and even some today. Measuring it by the standards of the horrifying original, it’s a failure, but most comedies would be (except perhaps those starring James Corden). However, it must certainly be admitted that the film is very far from flawless.

Though I love the way the film writes and presents Stretch, none of the characters are portrayed with much subtlety, depth or consistency. As Lefty, Hopper is well cast but barely trying, and many of the action scenes get rather repetitive, usually consisting of Stretch screaming, and Leatherface or Lefty waving a chainsaw around to little effect, broken up with comedic asides from either Drayton or Chop-Top Sawyer, the third key member of the family, who provides much of the comedic filler. Some of the action works well though, especially the absurd opening attack where Leatherface dons not just a dried face but an entire desiccated body. The effect is kind of creepy but mostly very funny. It’s scenes like this where the film just does something preposterous that end up being funny, while it’s sad to say that most of its more knowing attempts to provide outright comic relief fall flatter.

The film cares little for pace and certainly for logic, but its willingness to break out of the original’s box does result in consistently unexpected results, so there’s always something diverting going on. The weakest part comes near the end when the film retreads the family dinner scene from the original. There are some contextual factors that initially give the scene a different dynamic, but at the end of the day I wish they’d done something new, given how much the rest of the film departs from the ghoulish, unrelenting terror of the original. Perhaps there was room here for a more sincerely felt exploration of its best ideas, but far from the aggressive and oppressive tone of its predecessor, and for better or for worse, The Texas Chainsaw Massacre 2 embraces the absurd and the ridiculous.