In my day 1 review of Mechanical Head Studios’ Cyber Shadow, I stated that my primary concern was how it would evolve the movement mechanics of the ninja you play as. Curiously, it’s over halfway through the game that you have a completed repertoire; you can wall jump, double jump, send projectiles flying back at robots in the form of blue energy, you can throw explosive kunai, and more. And like many action platformers, the difficulty ramps up to reflect the wide array of options you have available to you. The biggest question for me was something I struggled with, though; was Am I still enjoying myself? Were my repeated deaths from one mistake adding up to a satisfying, enjoyable experience for me personally? 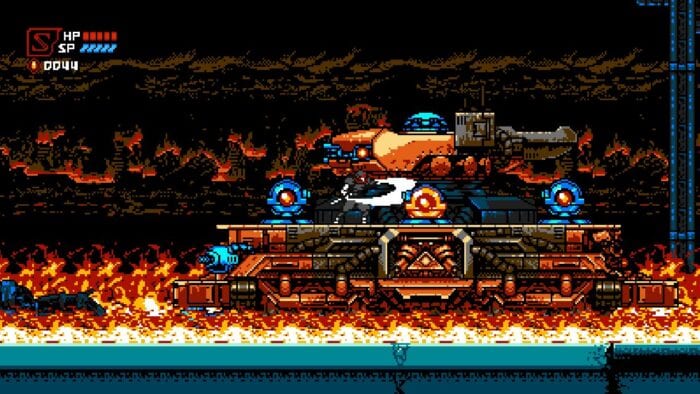 I’m no stranger to difficult games. Hotline Miami is one of my favorite games of the 2010s, and the extremely difficult Sekiro: Shadows Die Twice was my personal game of the year in 2019. I enjoy being challenged, and for me, the challenge comes from the knowledge that I can succeed. The reason I loved Sekiro so much is that, once everything clicked—and my brain shifted to the right gear for a given combat challenge—what once seemed like a cheap, impossible fight turned into a white knuckle game of tug-of-war between me and the enemy AI. A boss I might have spent hours on suddenly went down in a matter of minutes, with them barely landing a scratch on me. The difficulty felt empowering and rewarding. It placed me in the mindset of a skilled but fragile warrior. It required me to think about how I would approach a given encounter.

Cyber Shadow does a lot of similar stuff with its approach to difficulty. As I stated in my previous article, the game is not shy about throwing the player in the deep end at any given moment. Sure, returning to earlier levels later in the game saw me able to rip through them even though they seemed insurmountable early on. But not only was I more in tune with what the game would throw at me, but I had better movement and combat options available to me, and yes, it should be said that once you have all of your abilities, you truly do feel like a badass ninja warrior, leaping around, bouncing off of enemies with your sword and dashing through them after hitting the sprint button.

But it was near the end of the game that I found myself not really enjoying the game’s obstacle courses. Like old school platformers such as Ninja Gaiden and Castlevania, enemies are more extensions of the environment than combat encounters. A flying enemy is moreso there to challenge your reflexes and your ability to process information than it is to present you with combat. This is just as well since most enemies go down in a few swings of your sword but combined with the absolutely fiendish level design of the late game, enemies that are easy enough on their own turn into challenging and often infuriating obstacles.

It’s not uncommon near the end of the game for the player to navigate room after room filled with insta-kill spikes or bottomless pits, which means they have to have pixel-perfect button pressing and spacing to succeed. Death carries no other penalty than sending you back to the last checkpoint, but this is exacerbated later when checkpoints become fewer and fewer, and you must overcome more and more instant death obstacles. And the biggest problem for me personally is that the margin for error is so, so slight that more times than not, one mistake would instantly kill me and send me back to the last checkpoint, whether it’s because I fell into some spikes or because I fell into a pool of electrified water and was simultaneously swarmed by enemies. The only choice I had was trying to (slowly) swim away and take damage from the electricity, or jump out of the water to be hit by the enemies, which stunned me briefly, then sent me back down into the water.

And here’s the thing: my lack of enjoyment, for the most part, entirely stems from the fact that I am very, very bad at these kinds of action platforming games. I enjoy the genre a lot, with recent entries like the Azure Striker Gunvolt franchise and, of course, Shovel Knight Treasure Trove providing me with plenty of entertainment. But in the case of Cyber Shadow, it absolutely demands that you use every single tool at your disposal. Unfortunately for me, one of these moves is the parry, which requires you to press a directional button when whatever the projectile is about to hit you to negate damage and reflect it back. Again, this is entirely on me, but I’ve always struggled with moves that require directional inputs; oftentimes, I overcorrect and in the case of Cyber Shadow, wind up dashing when I don’t mean to. And in this game where precise, fast movement is the difference between life and death, that caused many instances of frustration for me. 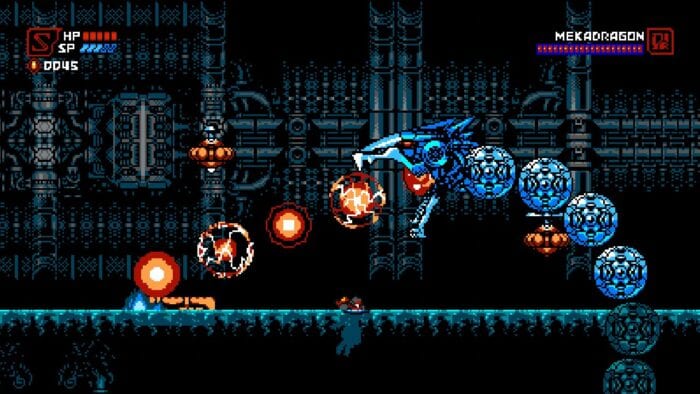 This is not to say that this is a bad game by any means. In fact, from a purely objective standpoint, it’s a pretty good one. The graphics are clean but effective, Enrique Martin’s soundtrack is bumping, and there’s plenty of fun to be had from its fast-paced action and cyberpunk setting, particularly in a later section that sees you piloting a mech suit with powerful guns. But for me, the level design became too much for me to say that I enjoyed my time with the game. The margin for error was too razor-thin, and having to replay and replay entire rooms at a time left me with a sour taste in my mouth. I fully understand what a hypocrite that makes me, but I can’t help how I feel about it.

That being said, there is absolutely a market for these kinds of uber-challenging throwbacks, and if you’re the kind of person that relishes fast-paced action platforming, this is an easy must buy. The fact that Mechanical Head Studios is a team consisting of two people makes the tight level design and great aesthetics all the more impressive, and such well-designed games coming from such small studios is something that should be celebrated. Just be prepared for your blood pressure to go up.