Bloodstained: Ritual of the Night was a triumph. While not a perfect game, it was exactly what any fan of Castlevania: Symphony of the Night could ever ask for. It took the content of the PSX classic and reworked it for the modern era. It was an homage that flirts with being a direct riff on what came before it.

Three weeks ago, the game received a substantial update adding Speed Run Mode, Boss Revenge Mode (play as boss baddies), and other cool, optional features, none of which interested me all that much. However, one mode did get my attention: Classic Mode.

Classic Mode is like playing an old school Castlevania game where you merely progress through linear levels (peep that old timey map) ultimately facing off against bosses (with the classic “Pez candy” life bar) at the end of each section. While that may simply sound like the Bloodstained: Curse of the Moon games, this mode is done with the current gen graphics of the main game.

As I began playing, I noted several sections that are clearly paying tribute to the original NES Castlevania. The first level features a section with fishmen jumping out of the water, culminating in a boss battle with a giant bat. The second section has those pesky Medusa Head stand-ins, crushing spikes, and hard-to-time jumps.

The references go even deeper at times. In level two there is an area (that looks similar to an area in the original game) where you can break a wall with your whip, but nothing happens. If you walk into the cubby hole and crouch however (whoop whoop whoop!) a hidden treasure worth points appears.

By the time I reached level three I said to myself, ‘Bring on the hunchbacks!’ which is a reference to the beginning of the third level in the NES classic where they make their first appearance, and wouldn’t you know it, the RotN versions were indeed there! So far I’ve gotten to level four, which again pays heavy homage to the original (although no “cut scene” where you fall a great distance). It’s a challenging mode, and I’m enjoying it immensely. 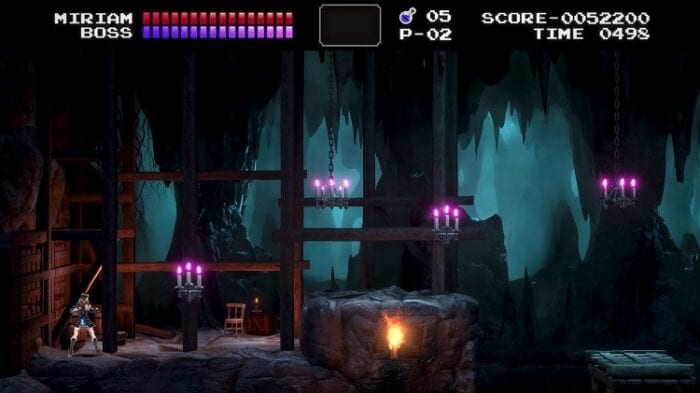 Ring of Pain is Hearthstone meets The Binding of Isaac and is utterly addictive. Its uncanny atmosphere and dark approach to card combat games makes for a memorable experience. You play as an unknown individual, confused and inquisitive about the rather odd situation you are in. You’re confronted with seemingly endless rings of cards, that comprise of armor, weapons and gruesome creatures hellbent on destroying you. Apparent “friends” you meet along the way, including the creepy Owl, are vague in their motives and overall place in the world, and the only goal, other than survive, is to locate various exit cards that will throw you deeper into the unknown, and confront you with ever-growing rings of cards.

The presentation and gameplay are quite unique. Every ring of cards requires you to circle through it and make choices. These choices are encouraged to be made ahead of time; much like chess—making you think two spaces ahead. Since the circle is a, well, circle, you can naturally see what sort of things you’re going to have to deal with. However, you will be forced to always deal with the two fore fronted cards. Planning is essential but never easy. It’s a hard one to explain and can look daunting, but I found it simple to pick up the jist.

Your focus in this game is fixed on balancing various stats to survive long enough to reach the next depth. Never have I concentrated harder on a game of this ilk. You never feel sure on the decisions you make. Every choice is met with an upside and a downside, offering a pick your poison approach that’s wild to explore, especially when there are so many different combinations you can experiment with. Its stressful and held me in a thinking mans pose at every opportunity. The stress is heightened in no small part to the often-terrifying music and morbid mood that parade the overall experience. At times, it can feel a little too reliant on luck, as each run is procedurally generated to the point where you can literally die on the first ring via an unfair arrangement. But the lightening fast reset will just have you starting again after a prayer or two to lady luck.

The narrative opts for a Dark Souls, “we aren’t telling you nothing overtly” approach, but takes this to the extreme. I would have liked a little more context as to what the overall point of this strange world is. There is a fascination about the whys of the world, but it’s too vague and all surface. The art design for Ring of Pain is contrastingly colorful and morbid; often resembling children’s drawings created in a nightmare.

If you ever manage to reach the end, the sense of achievement is weighty. You’ll still contemplate the horrors you faced in card form, and your curiosity will lead you to venture again and again into the Ring of Pain, in order to gleam its secret equipment and discover new paths. It’s a bit pricey for what it is at the moment, but I say definitely give this one a go if it goes on sale and you want to apply some enjoyable stress on the mind. 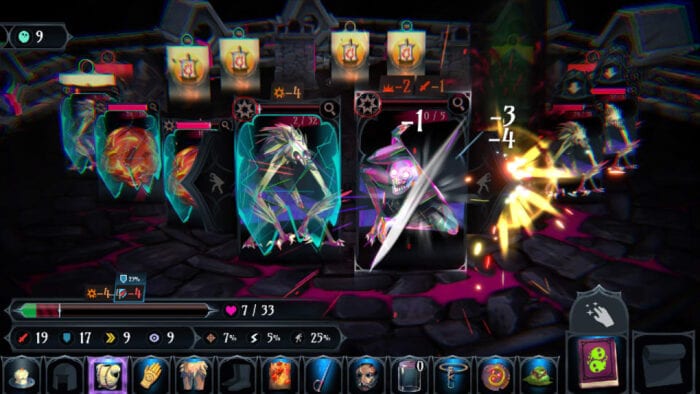 After many months of downtime, I’m back to playing Undermine after it recently got a big update. It’s in a similar vein to others in the roguelite genre, Binding of Isaac and Enter the Gungeon (some of my personal favouites) where you travel through randomly generated caves while collecting gold and powerups. You’re a little minor with a canary (although you get other familiars later) armed with your trusty pickaxe that you use as a weapon and to mine gold. You can also throw it, which is my preferred method. You’ll find chests containing powerups for your axe and bombs, like “bombbushka,” which makes your bombs explode into smaller and smaller bombs, or chain lighting for your pickaxe. Side note, no matter the game, I go for chain lighting effects. I love them. I don’t know what it is about roguelites that bring me back again and again. They’re very addictive. It takes me a long time to get “good” at a game (my Gungeon and Hades hours are full of many failures) but I come back every time. One more game! I can get farther! You get into this zone while playing and I lose track of time. Probably helping me take my mind off of world events! 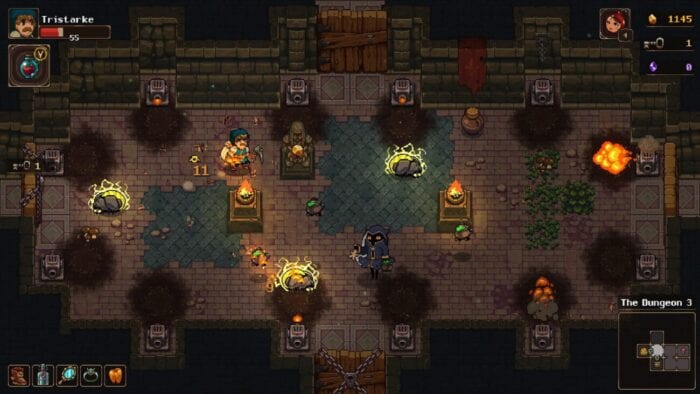 I have kind of been dipping in and out of a lot of different games lately, but this week I was curious about new release The Medium. Not going to lie—I knew nothing about it going in. Typically, I stay up on the announcements of new releases and get a sense for the games I’m about to get involved in, but I just subscribed to Xbox Game Pass and it was the first thing I saw when I opened the app on my PC. As mentioned in any previous horror games I’ve reviewed, I like to tempt myself with
horror games, but I’m a bit jumpy when it comes to playing them. After about 3-4 hours of gameplay, I’ve only jumped once.
The Medium starts off with our protagonist, Marianne, tutorially looking for a tie clip and saying goodbye to a friend one last time. As the player learns of Marianne’s powers—and how to develop film—a phone call comes in asking Marianne for help. The man on the other line, Thomas, offers Marianne the truth about her powers but she needs to meet him at an abandoned hotel in Niwa. It’s all standard horror fare; a haunted hotel, a medium, and a “help me” message—so of course she goes. And after breaking and entering, Marianne begins following a little ghost girl named Sadness who may know where Thomas is.
So far, I get the sense that I should be able to finish this game without the kinds of issues I normally have during horror playthroughs. I actually don’t get the type of anxiety in the game that I got from Resident Evil VII though the fixed camera and some survival bits in The Medium have definitely borrowed from the Resident Evil franchise. My first impressions of the game actually reminded me of the older, not so well-received game called Murdered: Soul Suspect. I loved playing Murdered: Soul Suspect when it released as I was first dipping my toes into horror games on the PS3. Though I’m not solving my own murder in The Medium, there are similarities between both games in stealth and investigation as well as some story aesthetics. The Medium is different in one unique way: it operates in two worlds a lot of the time. A dual-reality feature allows you to spend time walking around in reality and the spirit world simultaneously, an interesting split-screen effect where the items and puzzles have to be found and solved between worlds.
There’s been a lot of comparison of The Medium to the Silent Hill games and I don’t think that’s wrong in a lot of ways. One big component is likely the spirit world, and the monsters Marianne must face within. It resemble parts of the Otherworld in Silent Hill. Honestly, I got a more Lovecraftian vibe, maybe because hotels can feel like asylums, but I also haven’t seen a Silent Hill game in a while either. The thing I found mostly comparable to Silent Hill ended up being the music and, lo and behold, Akira Yamaoka, composer for the Silent Hill series, also provided the physical realm soundtrack for The Medium, and he continues to be extremely effective in crafting creepy, ominous scores.
I do enjoy what I’ve seen so far in my journey through the Niwa Resort, but I think fans looking for those heavy scares provided by Silent Hill or Resident Evil are going to be left wanting. The hotel is more on the unsettling side than hair-raising and gameplay is easy enough to figure out, even if the first two hours feel like nonstop instructions. All in all, I’d say so far, the game is somewhere in between good and bad…very Medium, but I am genuinely interested in where the story is headed and I really enjoy these types of investigation games. Who knows, maybe the second half of the game will be blood curdling and I’ll have to come back here to write an addendum next week. 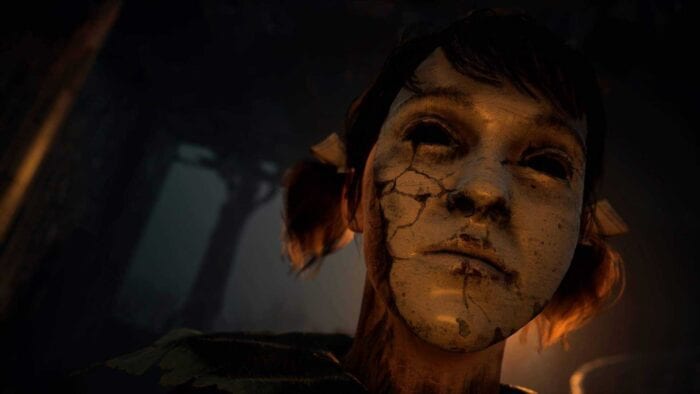