Each month, dozens of new films are added to the Criterion Channel. While the rich selection of feature-length classic and independent films obviously gets a lot of well-deserved attention, I wanted to shine a little light on some of the short films. I believe that short films should get a lot more attention than they typically do—they are breeding grounds of experimentation and non-traditional storytelling, and often are important outlets for marginalized voices.

February’s slate of films include collections of films by pioneering Civil Rights Movement documentarian Madeline Anderson, Ghanaian-American filmmaker Akosua Adoma Owusu, Canadian filmmaker Guy Maddin, the team of filmmaker Kevin Jerome Everson and historian Claudrena Harold, and “contemporary American cinema’s foremost neorealist” Ramin Bahrani. I watched every short film added to Criterion Channel this month, and have chosen to highlight some of my favorites below. The list is totally subjective, and I would still recommend watching as many of the films as you can.

While this article is exclusively focusing on films that are newly added to Criterion Channel, I’m also keeping track of all of the short films I watch in monthly Letterboxd lists, whether on Criterion Channel or elsewhere. I’ve listed the streaming service that I watched them on, with the films that I talk about in this article marked with two asterisks. Feel free to follow me and the lists on Letterboxd and reach out to me on Twitter if you want to discuss any of the films! 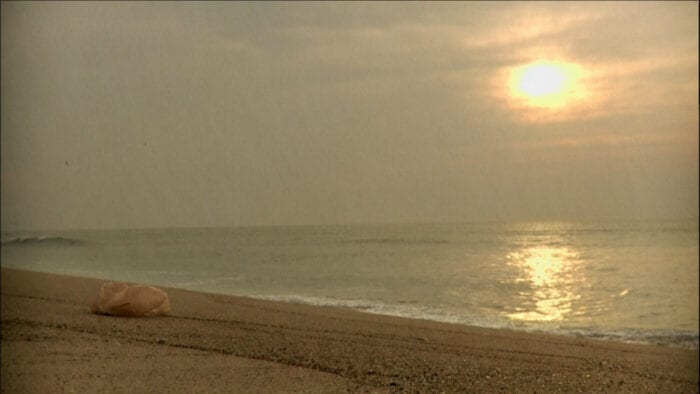 There’s a meme that makes me chuckle that describes the thought process behind the plots of Pixar movies. The meme escalates from “what if toys had feelings” to “what if bugs had feelings,” all the way to “what if feelings had feelings.” I sort of imagine that in a weird way, this was also the genesis of Ramin Bahrani’s short film Plastic Bag: “what if plastic grocery bags had feelings?”

Plastic Bag is about just that: the life of a plastic bag, told to us by the plastic bag (voiced by the dulcet tones of Werner Herzog, and I genuinely wonder if he knew that he was voicing a plastic bag when he recorded it). What could, and should, be a rather ridiculous concept of a film is instead a beautiful examination of life, pollution, religion, and disposability.

The film starts with the plastic bag on the beach in front of the Pacific Ocean. The film then tells us how he got there: this is a sentient grocery bag that considers the woman that bought him its “maker.” The Maker uses the bag for a variety of things before throwing it away. The Bag becomes obsessed with trying to find The Maker and searches for her for years. Since plastic lasts so long, the bag lasts so long that at some point humans disappear from the earth. At one point, the bag falls in love with another bag before getting separated. It encounters some fanatical bags that inspire him to search for the Pacific Vortex, which brings the bag to the beach he started the film on.

It is a beautiful film, especially considering it’s about something as seemingly banal as a plastic bag. There are moments when the bag looks alive—as if it’s dancing or breathing. The film highlights an incredible contradiction in the existence of single-use plastics: they are intended to have short-lived usefulness and existence but last hundreds of years. The bag’s near-immortality—and by extension, all of the plastic bags that humans consume and dispose of after a single use—meant that something that wasn’t meant to last presumably outlived the humans that created it. At one point the bag even wishes it could reject its immortality. The film also examines our beliefs and where they come from through the bag’s naive attempts to assign purpose to its existence and creation. The bag wasn’t really created by the Maker, but still assigns importance to it. 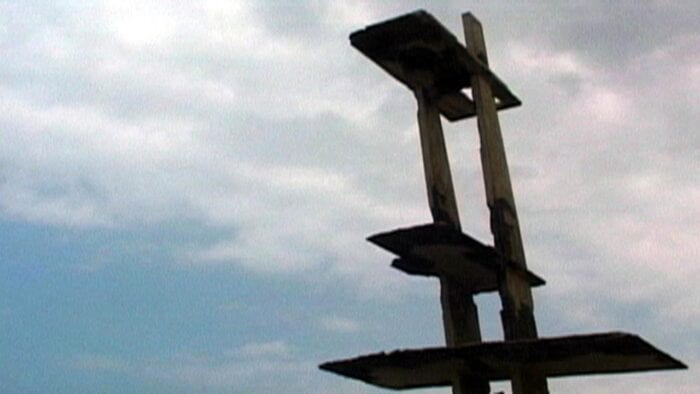 According to its blurb, Drexciya takes its name from a Detroit-based Afrofuturist electronic band with the same name. Like jazz legend Sun Ra before them, the band Drexciya developed a mythology around their group and its name, claiming that Drexciya was the name of an Atlantis-like “underwater country populated by the unborn children of pregnant African women who were thrown off of slave ships.” The film approaches its inspiration in an abstract but powerful way: by documenting an abandoned and dilapidated Ghanaian swimming pool.

The film is much closer to photography-in-time than a narrative film. People are rarely seen, and when they are, it is almost voyeuristically at a great distance. Instead, the film is composed of shots of the disrepair of the pool: the diving boards are deteriorating, the tiles at the bottom broken, the ladders rusty, the paint on the bathroom doors peeling.

Like many of Owusu’s films, it is very sonically rich, with droning tones highlighting the emptiness of the pool. These drones heighten the meditativeness of the film. At points, the soundtrack seems like it’s using actual whale cries, The quiet of the film is occasionally interrupted by loud, disembodied splashes. These splashes are emblematic of the filmmaking dichotomies that are subtly examined in the film: meditative silence vs. disruption, time-lapse vs. real-time, shaky handheld shots vs. still tripod ones.

The short ends with a recording of “Wade in the Water” slowly fading in over a still shot of a diving board. Beyond just tying into the theme of water in the film and the fictional city that inspired it, the song strengthens and broadens the film’s themes. The song was used to help enslaved people escape to freedom, telling them to go into the water to keep dogs from following their trails. Wading in water also invokes images of baptism, and by extension rebirth and cleansing. Sadly, the pool doesn’t have water to wade in.

On Monday Last Week stands out from Owusu’s other films on Criterion Channel by being a more traditionally narrative story. Many of her other films on the channel are much more experimental: video collages, non-narrative shorts, and visual poetry.

The film tells the story of a Nigerian woman named Kamara. Despite earning a master’s degree, Kamara takes on the job of a nanny to make ends meet while she’s waiting for her green card. Her employers are a rich, mixed-race American family: the husband Neil is a white lawyer that feels plucked from Get Out, and the wife Tracy an eccentric visual artist.

While Neil’s racism is obvious, Tracy’s feelings are much more complicated. It takes a while before we’re introduced to Tracy, who is working in the basement on a major artwork. Their first interaction involves Tracy examining Kamara, and she’s entranced by her teeth and name. Kamara feels like she’s made a connection with Tracy, and experiences an attraction to her. However, while Tracy and Kamara share identities as black women, Tracy doesn’t share the “triple consciousness” of an immigrant identity. At the end of the film, it becomes clear that Tracy was only interested in Kamara’s perceived exoticness, not her humanity, as she quickly loses interest in favor of her son’s French tutor. The song over the credits perfectly sums up her attitude toward Kamara, and how Kamara feels in return: “I am invisible to you/My body you’re looking through/My hands, you’re using, my roots you’re dismissing/I swallow my pride for the sake of what I’m waiting for.”

My Dad is 100 Years Old is equal parts one-woman play, eulogy, biography, film theory debate, and Eraserhead-esque fever dream. As implied by the title, the film is a tribute to Italian neorealist director Roberto Rossellini by his daughter Isabella Rossellini (who is most famous for playing Dorothy Vallens in Blue Velvet) in honor of his centennial.

Roberto is portrayed as a disembodied talking stomach/torso (I know that a disembodied torso is an oxymoron, but it’s really the best description for it), recalling a remembrance from Isabella. Rossellini recalls that as a child, she thought her father was pregnant, and she and her siblings’ favorite childhood game was throwing themselves on his belly.

While Isabella Rossellini doesn’t play her father’s stomach, she does play every other character in the film. The other characters congregate in an empty theater debate cinema and try to sway Roberto to their way of thinking. A silhouetted Alfred Hitchcock proselytizes as he looms from a theater balcony, David O. Selznick lounges in a chair, Frederico Fellini flatters Roberto, and Charlie Chaplin wordlessly accepts Roberto’s praise (again, all played by Isabella). The “real” Isabella is also present, silently observing the back-and-forth. Eventually, they are all supplanted by a towering big screen depiction of Isabella’s mother, Ingrid Bergman (apparently this film was the first time Isabella had ever portrayed her mother).

Rossellini’s portrayal of Fellini makes the film a spiritual predecessor, if not an outright prequel, to Maddin’s 2020 trance film The Rabbit Hunters, which is also new to Criterion Channel this month. In the new short, she also plays Fellini, this time wandering through a dreamworld akin to a Twin Peaks: The Return-esque hellscape (complete with red curtains and strobing spotlights).

While the film lauds Roberto Rossellini’s neorealist style and Isabella laments his diminishing place in the film canon, it’s literally impossible for anyone to call My Dad is 100 Years Old a neorealist film. Abstraction abounds in the film, and Maddin uses it to further his examination of the nature of cinema by breaking the fourth wall. One of the ways that Maddin breaks the fourth wall is by casting Rossellini in multiple parts, including her own mother, while appearing in the film as herself and delivering confessional monologues directly to the camera. Additionally, Rossellini interrupts her own monologue at the climax of the film to “direct” the film mid-scene in a style more closely resembling her father’s, subverting the viewers expectations of what would have been a more emotionally charged scene.

This is just a taste of the newly added short films on Criterion Channel! What were some of your favorites? Was there a filmmaker whose filmography you’re excited to dive deeper into? I myself am excited to see more of Maddin’s films, since his Lynchian sensibility is right up my alley. Let me know in the comments or on Twitter, and I’ll be back next month to look at some more short films!