“Twin Peaks Episode 11: The Hunt for Laura’s Killers Reveals More Secrets” is also available in audio-visual format on the 25YL YouTube channel. Join us every day from January 30 to February 28, as we look at every episode of Seasons 1 & 2 for Twin Peaks Month.

Twin Peaks Episode 11 opens with a scream shattering an otherwise dark, empty image that slowly zooms out, revealing the walls of what appears to be a long, creepy tunnel, then a strange wall of similar tunnels. We hear the faint echo of Laura crying out to Leland before we see that the cavern we were staring down was nothing more than a pin-sized hole in the perforated acoustic tiling of the interrogation room of the Twin Peaks Sheriff’s Department. The idea originated from episode director Todd Holland but shares Lynch’s approach to Twin Peaks’ storytelling as chiefly atmospheric. So does the haunting soundscape that echoes through the acoustic tile, which is meant to isolate the sounds of the interrogation room. The imagery is a perfectly Lynchian examination of the dark underside of the mundane, especially paired with the ominous sound design, offering an impression of the many horrifying sounds, confessions, and descriptions of brutality that these tiny holes keep insulated within this room. 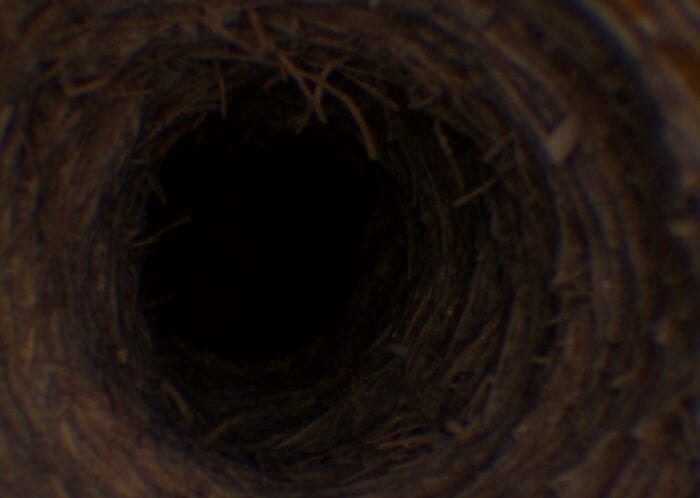 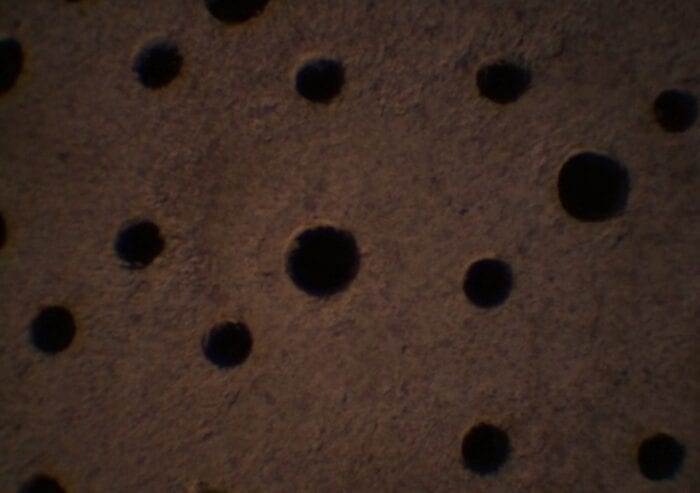 It’s also a disorienting moment that puts the audience—without even realizing it yet—inside the point of view of Laura’s killer. What does he see? An intense focus on empty nothingness. This episode also includes some of Ray Wise’s best work on Twin Peaks outside of Fire Walk With Me; his more outwardly visualized possession by BOB in Season 2 offers a manic contrast to the grieving Leland of Season 1. 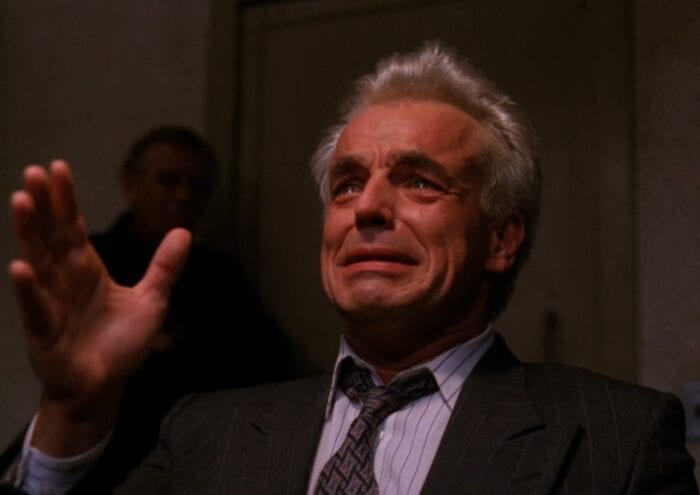 Lucy Faces A Dilemma, and the Double R Anticipates A Big Guest

I used to feel the same sense of irritation with the Dick Tremayne/Lucy/Andy love triangle as I do with James and Evelyn, but ever since I noticed that his line “Got a light?” (later, in Episode 16, “Arbitrary Law” ) is uttered at the same time BOB is let loose within the same building, I’ve thought he deserves more scrutiny. Indeed, at this point, he represents a corrupted, material ideal of a potential partner to Lucy in contrast to pure-of-heart Andy. Lucy finds Dick’s fashion sense and lifestyle attractive, telling Cooper about his cars and exercise regime while lamenting Andy’s lack of either. Of course, Dick is a salesman at Horne’s, and his job is to sell that lifestyle, and Lucy is angry that Andy isn’t interested in buying it.

This is also when Norma first finds out about M. T. Wentz coming through town, which spurs Hank into a scheming mode to try to get back on Norma’s good side. Hank’s help is awkward but harmless for now, but it’s not a good sign that he leans on his con-artist tendencies while Norma is still doing the actual work of running the diner. Hank suggests cosmetic changes and tries to sell every aspect of the restaurant except for the food. We see this play out again in The Return between Norma and her partner Walter when he negotiates franchises. Both Hank and Walter are interested in selling the idea of the Double R, whereas Ed Hurley keeps going back for the food. 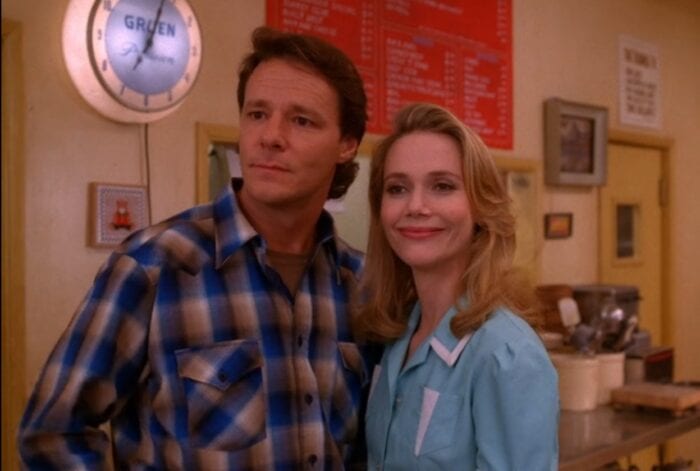 I can’t help but speculate that had Season 3 continued in the early ’90s, Lucy’s pregnancy and Andy’s involvement would have been another thematic layer to the show’s analysis of fatherhood, especially if they left the truth about Wally’s parentage ambiguous. The Return’s narrative is instead a distant take on the parenthood motif, as the new generation of Twin Peaks residents wrestle with more or less the same demons that haunted their parents, while Wally is liberated from the town and embodies a sort of youthful peace and enlightenment that echoes the wholesome, loving family the three make. At the core of this is Lucy’s decision to raise the child with Andy regardless of her baby’s true parentage and Andy’s eventual reconciliation with the biological reality. While Lucy chooses to carry on with the pregnancy in Episode 11, it is still an inherently choice-affirming message. 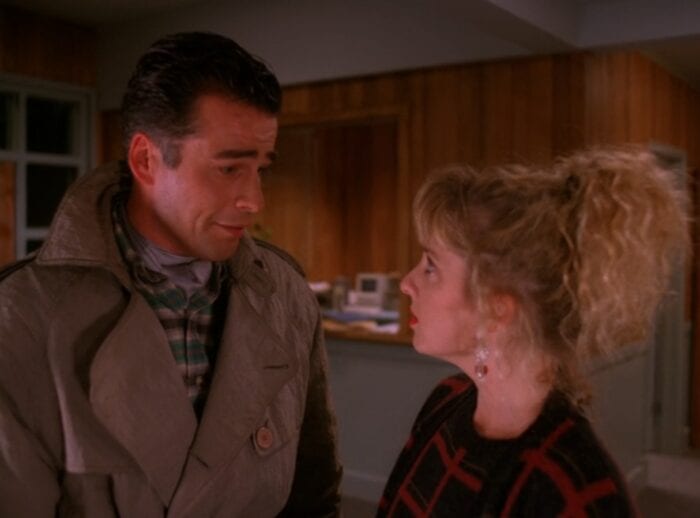 The Log Lady’s intros are likely the closest we’ll get to a David Lynch commentary on the original run of Twin Peaks, but the similarities are even more apparent after listening to his weather reports every day for several months in 2020. Margaret says:

Happiness, usually classified as a positive emotion, can bring good health to our body, and spread positive vibrations into our environment. Sometimes when we are ill, we are not on our best behavior. By ill, I mean any of the following: physically ill, emotionally ill, mentally ill, and/or spiritually ill.

Most would rightly recognize this as a hint about the nature of Laura’s true killer, but I think it’s also about Harold’s self-imposed isolation, possibly exacerbated by his obsession with the intimate details of other people’s psyches for his own work.

Writer Harley Peyton based Harold Smith on Arthur Inman, a reclusive writer like Harold who kept compulsive diaries about his entire life and numerous people he interviewed up until his suicide in 1963. After The Return, questions about a “living novel” arise yet again and prompt the inevitable theory is Harold the dreamer? Certainly, in some ways, he manages to keep Laura alive for a little longer, and as it seems like Laura intended to tell her story through Harold somehow. There are, of course, other odd things about Harold, and his proximity to the Tremonds certainly suggests he’s somehow haunted, but ultimately he doesn’t seem to maintain much of a presence in the spiritual realm of Twin Peaks. 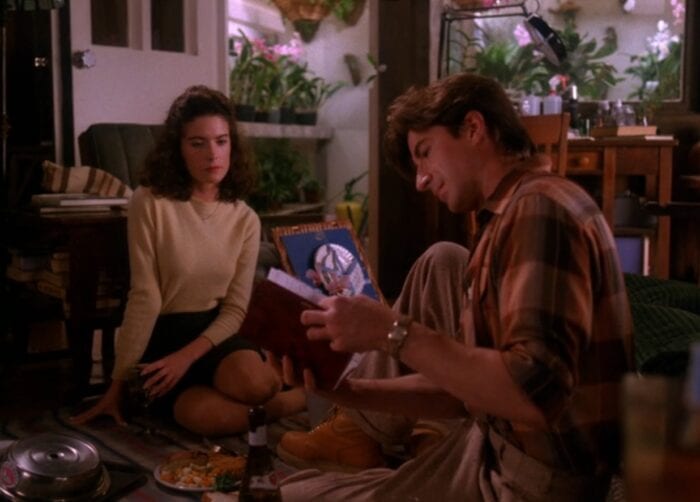 Audrey Horne is Abducted, and the Judge Comes to Town

The weakest part of Episode 11, and this stretch of Season 2 in general, is Audrey’s submission during her kidnapping. It’s disturbing, but merely a glimpse of the life Laura was leading up to her death. The plot doesn’t center on Laura’s murder at this point, but instead circles around it without quite getting any closer. Each new secret leads to further mysteries. Cooper, Audrey, and Donna are all lost in their own tangents that get them no closer to the truth about Laura, but their experiences still reveal necessary truths about how the town of Twin Peaks works. 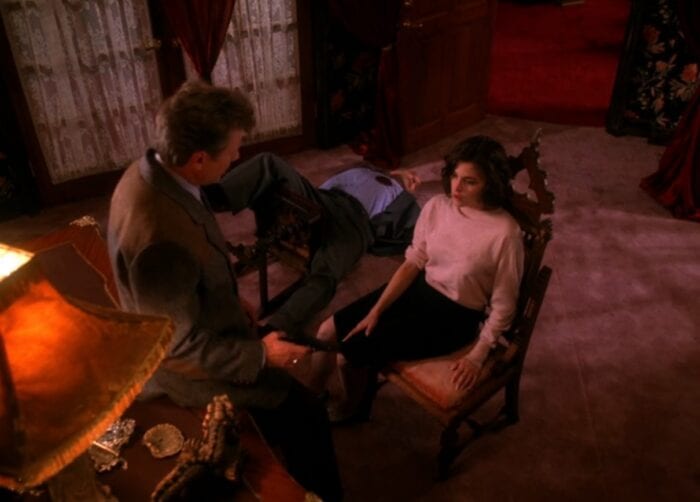 Judge Sternwood projects a lot of conservative, Reaganesque appeal and comes across as genuinely likable in all of his scenes, but there’s still something about his presence that I find unsettling. Maybe it’s the uncomfortable familiarity he exudes around Lucy, or the fact that he enters Twin Peaks during a storm and his lines tend to be accented with lightning. At the very least, he represents the old boys’ club that has fossilized itself in its own power and is therefore all too willing to extend mercy to Leland for Jacques’ murder based on his history with them and the town. A more sinister interpretation would have me believe that the judge himself is compromised by the Black Lodge, but like the Leland/BOB connections, the truth probably lies somewhere in the middle. In The Return, we do see how Mr. C/BOB can orchestrate elaborate plans that involve getting caught and released from law enforcement. Like Mrs. Hastings, we’ve seen that BOB’s influence can often include otherworldly Lodge entities that appear human, as well as his inhabited hosts. In the most generous interpretation, Judge Sternwood’s folksy admiration of Leland is a blind spot with lethal consequences. 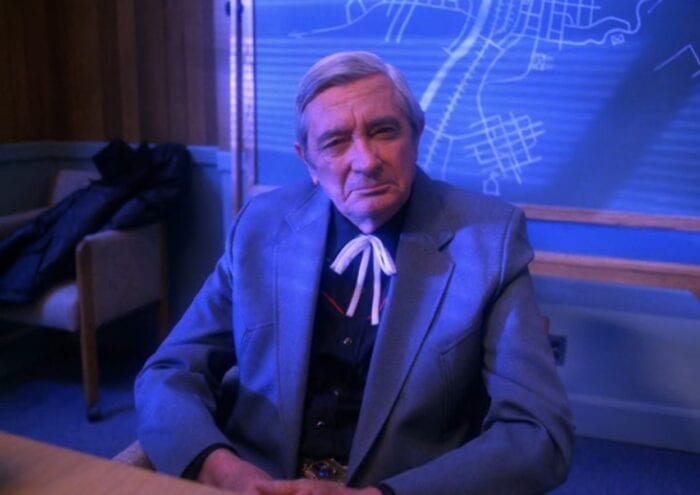 As the investigation into Laura’s murder draws closer to its conclusion, Cooper’s involvement starts to feel more passive as he looks for patterns or perhaps further guidance from the Giant/Fireman. Of course, this works for Cooper’s character, but as a method of investigation—waiting for a serial killer to repeat their patterns—it comes at a cost. With The Return’s ending percolating in my mind for a few years now, the cracks in Cooper’s persona are visible earlier on than I thought, and his penchant for mystical techniques have a natural tendency to trap him into inactivity. But in this case, the passing storm has swept in a different kind of disruption into Twin Peaks, another reminder that when it comes to who killed Laura Palmer, there are forces involved that are far beyond Cooper’s understanding.