“Twin Peaks Episode 17: Midseason Mirage” is also available in audio-visual format on the 25YL YouTube channel. Join us every day from January 30 to February 28, as we look at every episode of Seasons 1 & 2 for Twin Peaks Month.

I am writing this on Dec. 8, 2020. Episode 17 aired on Dec. 8, 1990, 30 years ago today. That wasn’t planned. Honestly, though, the more I learn and write about Twin Peaks, these coincidences seem to become expected. There is a magical quality to all of it, even 30 years later. While the series’ mysteries feel irreconcilable, there are as many alignments, and the more you seek them, the more they seem to manifest.

Of course, it is also a matter of perspective—how and from where one views a thing. With Laura’s killer revealed, audiences entered what John Thorne calls in his book The Essential Wrapped in Plastic as the first episode in “The Second Season Slump.” Unofficially titled “Dispute Between Brothers,” we are introduced to a few unique characters. One of the brothers is Douglas Milford, a minor character in 1990 who was given renewed attention 25 years later in Mark Frost’s The Secret History of Twin Peaks (2016). That novel in particular changes our reading of this episode. My assumption in writing this is that readers are already familiar with the narrative details of the episode, which I will only engage with selectively and not in summary. 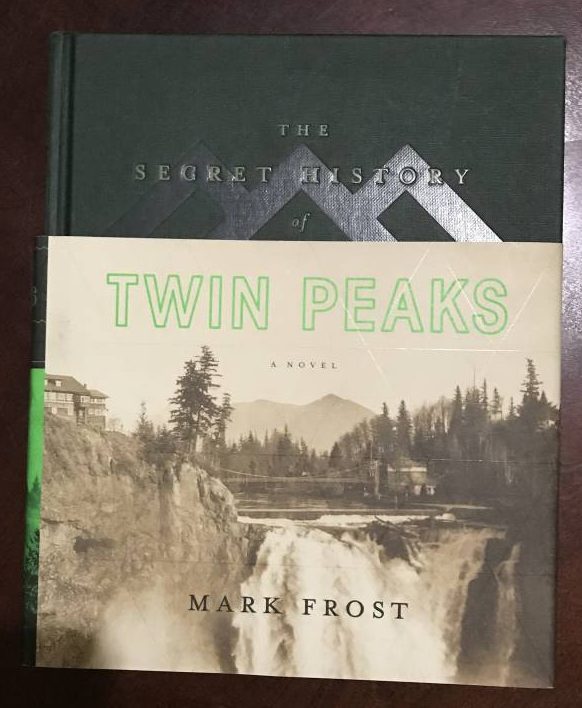 There is an idea of post-classical Hollywood, a time of production following changes in business and industry for traditional commercial filmmaking. Couched in that divide is a handoff from classical noir to post-classical, or neo-noir. Just a month or two ago, I was asked if Twin Peaks: The Return is a direct sequel or not. This person did not believe it works as a direct sequel for many of the commonly stated and agreed-upon reasons—production, feel, distance from or lack of nostalgia, atmosphere, etc. A journey through Twin Peaks is one with a lot of winding roads, most of which are lined with those famous Douglas firs, but on ever-changing terrain. I want to find a different way to think about the Season 2 slump as a kind of “post-early conception” period for the series, an adjusted tone—perhaps neo-mythos or post-Lynch Twin Peaks. Admittedly, I do not have a definitive term, but in this perspective, nothing is diminished.

The noticeable differences are more integrated into our enjoyment and understanding of the series with the integration of The Return and Secret History. The episode marks the first noticeable closing of one thing and the start of another in the series, beyond the distinction of Season 1 versus Season 2. It is almost like Season 2 truly begins here. Laura’s murder is solved, and her tragic killer is dead. Cooper’s case is closed. The characters are at the start of a new path.

Fans of Twin Peaks are familiar with debates on from-one-thing-to-another. Was Fire Walk with Me true to the Twin Peaks that fans had come to know and cherish? The Return? Or had they cherished it—all of it? Was there enough of it on Dec. 8, 1990, to observe that it does not have a consistent tone, that it is a narrative and production in constant flux? That is its nature and part and parcel of its required narrative and acting. Now we can understand it as a mirage, and Episode 17 goes a long way in helping us see and understand this.

Starting with Episode 17, quirk becomes camp and slightly off-center from what came before. And I’m adapting my thoughts on this from Robert Arnett’s approach in Neo-Noir as Post-Classical Hollywood Cinema (2020). His idea is that neo-noir is best understood as “mirage,” defined in periods, decades, and also overlapping thematically separate but defined timelines. It is at least post-classical. Of course, well noted is the absence of Lynch and Frost and the ushering in of new directors and writers as the causes for those changes. That’s an aspect, certainly, but there is new meaning in the story writ large, as we understand it now. What I am stating is that Episode 17 begins a new continuation of Twin Peaks transmedia that is representative of something other than bad writing or directing or the absence of Lynch and Frost. 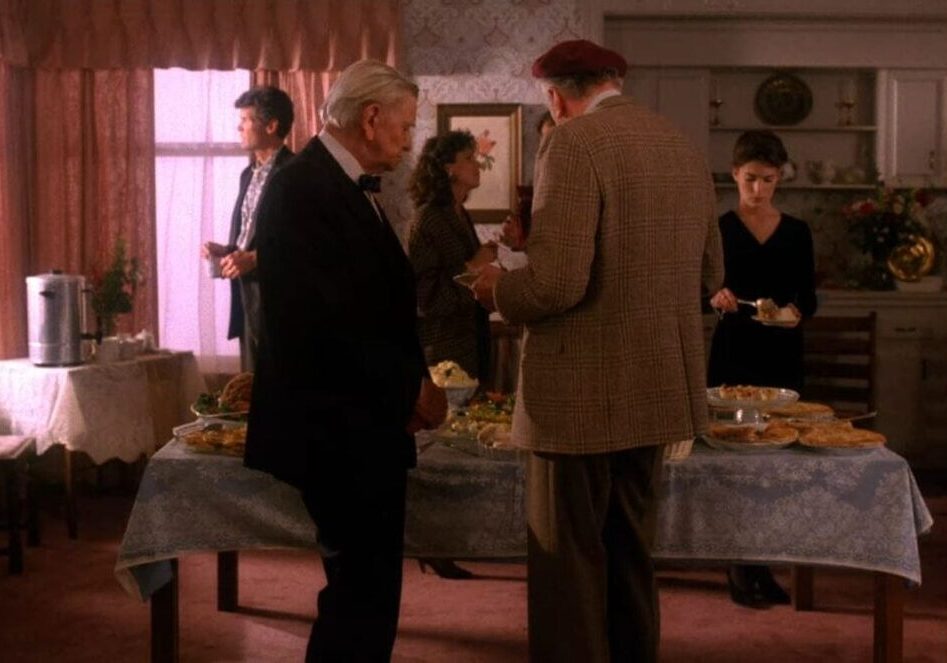 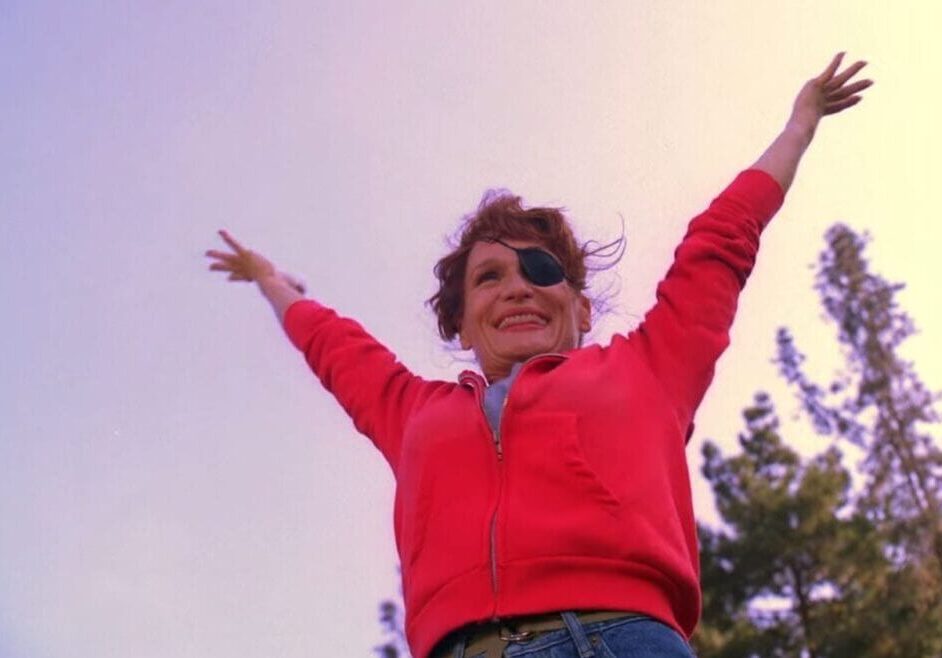 The mythos that began with the dream in the international pilot (or also in episode 3) and then picks up again with the Giant in Episode 8 establishes mythos in Twin Peaks. The building of this mythos continues again in Episode 17. It is in this episode that true attempts at explanation begin to surface. Laura’s killer has been revealed. Now, they need to give some background to the supernatural and oneiric. Major Briggs begins to open himself up more to Cooper, and we can match that to some details learned in The Return. One approach to mitigating the “offness” in The Return is for audiences to note ripple effects of the mythos, or ask questions of “the Dreamer’s gaze.” Does this feel different? Do the characters feel different because we are reading someone else’s view of them? Is this an alternate timeline, separate from what we knew before? Good questions.

So, does the change in “Dispute Between Brothers” also indicate characters affected by the separation of Leland and Bob as something unnatural to their timeline? How is Cooper’s fate affected by this? Should Cooper have been involved? We might need to order some new evidence from the information we gathered in 2016 and 2017 while acknowledging that the Lodge entities (separate from ABC executives) needed to keep Cooper close.

We know that Cooper was sent to Twin Peaks to investigate Pulaski’s crossing of the border, not solely as a victim of a heinous crime but because of the nature of the crime, as an embedded agent of the Blue Rose Task Force. We need to include the messy details here from Twin Peaks: The Return Part 17 (this is where we get a bit quote-heavy):

Gordon Cole: For 25 years, I’ve kept something from you, Albert. Before he disappeared, Major Briggs shared with me and Cooper his discovery of an entity, an extreme negative force, called in olden times ‘Jowday.’ Over time, it’s become Judy. Major Briggs, Cooper, and I put together a plan that could lead us to Judy, and then, something happened to Major Briggs. And something happened to Cooper. Phillip Jeffries, who doesn’t really exist anymore, at least not in the normal sense, told me a long time ago that he was onto this entity, and he disappeared. Now, the last thing Cooper told me was … ‘If I disappear like the others, do everything you can to find me. I’m trying to kill two birds with one stone.’ And now, this thing of two Coopers. And recently a paid informant named Ray Monroe sent a cryptic message indicating that the Cooper we met at prison is looking for coordinates, coordinates from a certain Major Briggs. This plan, Albert, I couldn’t tell you about, and I’m sorry.

According to this, Briggs would have shared this information with Cole and Cooper at a time when Cole was in Twin Peaks and before the season finale, when Cooper goes missing. So, this occurs after this episode somewhere around Episode 25, “On the Wings of Love.” David Bushman and Arthur Smith supply some details about the episode in the Twin Peaks FAQ: All That’s Left to Know About a Place Both Wonderful and Strange.

David Lynch makes a delightful appearance as the aurally challenged Bureau Chief Cole, newly returned to Twin Peaks to deliver a confidential dossier on Earle to Cooper. It transpires that Earle was part of the Air Force’s UFO-centric Project Blue Book, linking him to the phenomena experienced by Major Briggs. (323)

The importance of Briggs and his meeting with Cooper in this episode is the beginning of a very important conversation between him and the Blue Rose Taskforce. Because of this, it is also important to note Douglas Milford’s presence in town in connection with details outlined in Frost’s Twin Peaks novel (please see the Milford-related articles from our Secrets and Mysteries series listed below for more).

In my rewatch this time, I found two lines the most important, the first by Donna to Big Ed and the second from Briggs to Cooper.

I place Donna’s line under the considered heading “Oneiric, or the perspective of a Dreamer” as opposed to “Ripple Effect.” Included under this heading is, first, Nadine’s admittance to the high school. There is a dream quality to her feats of strength as a cheerleader. Notice the picture quality and the sound effect that follows her cheerleader tryout. Why would the Dreamer see Nadine in the role of a Twin Peaks high school student? I don’t have an answer. I am just proposing the question. Secondly, there is the sudden turn in Bobby and Shelly’s relationship. The Dreamer sees Bobby turning to Audrey instead of Shelly. Where is that perspective coming from? But the key question is voiced by Donna. Two people in love couldn’t have caused all of this, could they? We must turn to Cooper’s story about Caroline to Audrey. The answer is: Indeed, they could have.

Then, we have a weighty conversation between Cooper and Briggs: 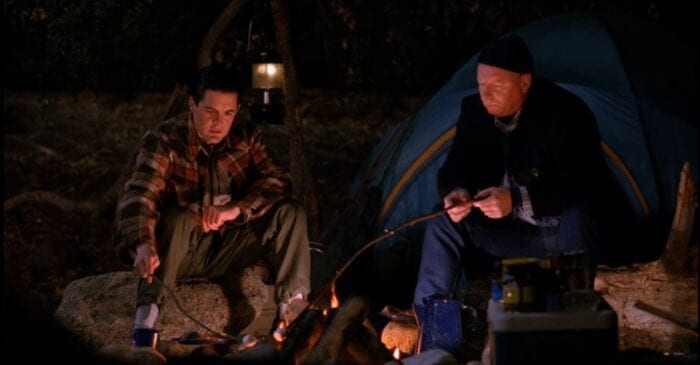 Cooper: Well, Major, I find myself thinking a lot about BOB, if he truly exists.

Briggs: I’ve pondered that same question continuously, since this horror was revealed to us.

Cooper: I try to imagine him out there, incarnate, looking for another victim to inhabit.

Briggs: There are powerful forces of evil in the world. It is some men’s fate to face great darkness. We each choose how to react. If the choice is fear, we become vulnerable to darkness. There are ways to resist. You, sir, were blessed with certain gifts. In this respect, you’re not alone. Have you ever heard of the White Lodge?

This is our famous introduction to the White Lodge, which can be chased back to Alice Baily’s Eternalization of the Hierarchy. Examples: “The Black Lodge, so-called, is occupied with the form aspect of manifestation; the White Lodge, with the consciousness aspect. […] The organised efforts of the Great White Lodge are directed toward lifting the organised forces of materialism to a higher and spiritual plane.” It even makes an appearance in James Joyce’s Ulysses in a section discussing theosophy and Helena Blavatsky. “Dunlop, Judge, the noblest Roman of them all, A. E., Arval, the Name Ineffable, in heaven hight, K. H., their master, whose identity is no secret to adepts. Brothers of the great white lodge always watching to see if they can help” (87). We also see a black-hooded character in the woods often associated with the dugpas of Windom Earle’s later Project Blue Book rant.

The point to all of this is that we enter a phase of Twin Peaks where the mythos finds its scaffolding, and what initially was viewed as rudderless story-building can now be seen as essential and telling. It is all part of the structural mirage of Twin Peaks, an oneiric journey grounded in the time and people, but always in flux—a town where a yellow light still means slow down, and the story of two people in love may contain the real secret history behind it all.