Better Call Saul and its progenitor Breaking Bad are just a few of the many, many TV shows that are less episodic and more one interconnected, super long story. Either show at its best features beautiful character writing and shocking twists that forever change the show’s landscape, but I think there’s something to be said for when either one does a smaller scale, mostly stand-alone episode. I recently restarted Better Call Saul since it was announced the sixth season would be its final one, and I fell out of watching it after graduating college lo these many moons ago. Time has caused me to forget large parts of the show’s first two seasons, but the bottle episode “Five-O” (written by Gordon Smith) always stood out to me as either show at its absolute best. Upon rewatch, I stand by that notion, but now, a few years and a new epilogue movie later, I have a better understanding of why.

To me, what makes either Breaking Bad or Better Call Saul so compelling is the moral question at its center: can someone do bad things to a good end? This question pops up in every piece of media in what I’m going to refer to as the Badverse. Walter White starts off genuinely trying to help his family through illegal means before his own frustrated past and emasculated personality catches up with him and causes all of the terrible events of the show’s later seasons. Jimmy McGill was a con man who specialized in smooth-talking and exploiting others for his own gain, and the early seasons of Better Call Saul follow his futile attempts to go completely legit until circumstances and his own personality get in the way. These repeated elements are what make each show so compelling, but these themes are summed up in a near-perfect 45 minutes or so of TV with “Five-O.” 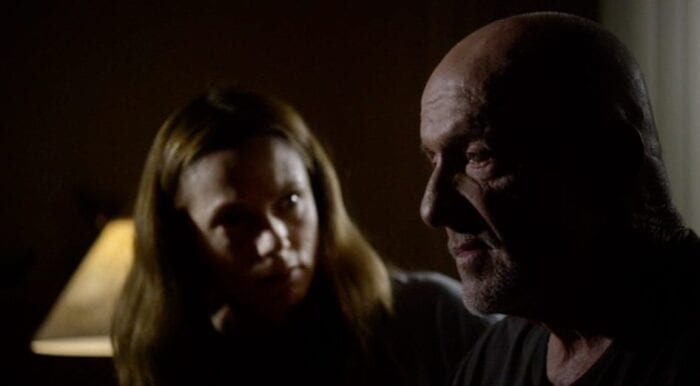 In Breaking Bad, Mike Ehrmantraut (played wonderfully deadpan by Jonathan Banks) is an enigmatic, aging badass. We don’t learn too much about him aside from the fact that he uses his ill-gotten gains to help financially support his daughter-in-law and granddaughter, whose father is conspicuously absent. For many pieces of media, viewers don’t need much more information to grow attached to the archetype he fills, and my brain is reeling from the near-infinite ways fleshing out his backstory could have gone wrong. After all, did anyone actually enjoy the fact that Boba Fett, the enigmatic, wannabe badass bounty hunter from the original Star Wars series, was actually just a clone and used to be a snot-nosed little kid?

Instead, with “Five-O,” Gordon Smith and the rest of Better Call Saul’s writing team turned Mike into a vision of the future for characters like Jimmy McGill and Walter White. He was a cop that was about as crooked as they come, with no moral quandaries about taking dirty money during drug busts. And as he explains later in the episode, almost every other cop he knew in the precinct was just as bad or worse than he was. We also learn that his son, Mattie, the father of his granddaughter, was eventually given the same choice he was when he was a much younger man: take the dirty money or suffer the consequences. He says something to the effect of, “If it even looks like you’re doing the right thing, it’s over.”

One of the many reasons this episode is so compelling is that its statement about the world we live in feels terrifyingly real. Mattie was killed by his own partner because of their own paranoia. He was worried that Mattie would go to internal affairs and put a stop to it before it could cause him further trouble. The core question at the heart of this episode, and really either series in the Badverse, is this: can there be such a thing as a bad guy if the whole system is rigged to begin with?

Mike knows the score. He knows how dangerous a cop who feels threatened can be, and it’s heavily implied he knows this because he has been that threatened cop. He has been in situations before where he had to take drastic, immoral measures, and at the stage of life he’s in during Better Call Saul, there is no going back to being an honest cop. Sure, he tries to leave it all behind by fleeing to Albuquerque, but the viewer knows from Breaking Bad that he simply becomes a different breed of criminal in just a few years’ time. Even ignoring later events of Better Call Saul, his speech at the end of “Five-O” about how he tried to drag his own son down into the dirt with him is tragic because we know he knows everything he does is wrong. He knows he is not a good person, but he’s lived badly for so long that he has no other option.

It’s a reflection of Jimmy’s own arc. Mike is a different version of what Jimmy will eventually become: a washed-up criminal with nothing but regrets in his past and an inability to change. But if we look at the story of Mattie as a metaphor for each show’s overall theme, it paints a bleak portrait of the world we live in. In the case of Mattie taking the drug money, what would the right move be? A basic sense of morality says that turning it all in is the right thing to do, but Mike makes a really good point when he says, “Some low-level drug dealer has more money than you’ll make in a lifetime as an honest cop.” It’s so easy to cast judgment on a cop when they take dirty money, but it’s tough to reconcile the fact that law enforcement is underpaid for what they do. And when the rewards of the alternative to their career path are placed before them, it makes complete sense they would take some for themselves.

But Mike also makes mention of how Mattie’s decision wouldn’t just affect him. He has a wife and daughter to think of as well—two people who could be put in real danger if he didn’t take the money. When you’re forced to choose between doing the “right thing” and committing a crime solely for the safety of yourself and your family, is that even a choice at all? Because, for Mattie, it isn’t just his corrupt partner he would be up against. He would be up against all the cops in the precinct—cops who specialize in altering crime scenes to further their own agenda. This small story perfectly encapsulates what’s so compelling about the Badverse: at what point does a person’s decision stop being bad and start being a fight for survival? At one point or another, all the major characters in both series cross a line that sets them on a self-destructive and ultimately tragic path that feels inevitable. 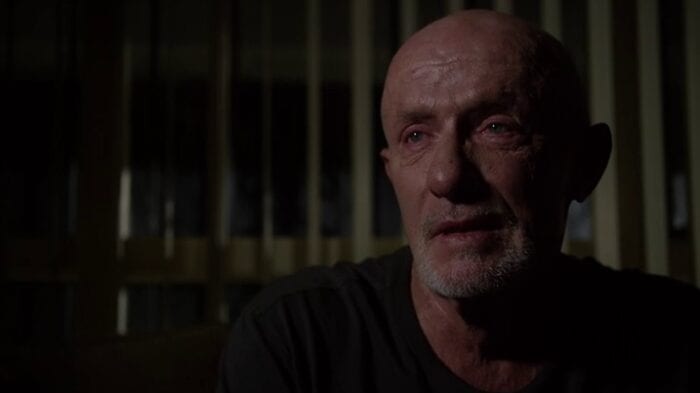 But the reasons for this aren’t just because these are bad people. Rewatching these early seasons of Better Call Saul, Jimmy is easy to root for even though he’s a complete sleazeball. He wants to be better. He wants to be a good person. He wants to put his troubled past behind him. He is simply unable to due to the world he lives in and the people he surrounds himself with. The odds are stacked against him from the very beginning. There is no escaping his fate. Sure, he might prolong it for a few years until Walter White comes along, but eventually his own misdeeds will catch up with him. Mike is such a compelling but tragic character because he has already accepted who he is and what the implications of that are. He is one of the bad guys, and he can’t fix that no matter how hard he tries.

This is why I hold that “Five-O” is the Badverse at its very best. Not only is it just a damn good, self-contained noir story with an exceptional performance from Jonathan Banks (I challenge anyone to watch the final scene and not get at least a little choked up), but it is a culmination of all the themes in the Badverse put into one episode and done in an extremely effective way. Not only that, but it effectively fleshes out Mike Ehrmantraut, a previously enigmatic character, in a way that feels true to his Breaking Bad character and storylines. It could have gone so wrong in so many ways. Instead, it’s a near-perfect episode of television with an interesting, important message: we are all people with deep, deep flaws, and everyone is just a bad situation away from being a criminal as bad or worse than any of the characters in either show.