Julian Schnabel may have begun his career as a painter, but without a doubt his greatest achievements have come in the cinematic world. So much of modern art is a meditation on the social function of the artist, and by stepping through to the mirror world of cinema, Schnabel was able to create his greatest portraits. Biographical films are common, and very often succumb to the most familiar of narrative tropes. No batch of cliches is quite so familiar as those that accompany a traditional tortured artist narrative, and it’s a rare film indeed that manages to breathe refreshing new life into them, as did Julie Taymor with Frida or Francois Girard with Thirty Two Short Films About Glenn Gould, which capture the spirited euphoria of living as well as any film yet made.

It’s therefore quite astonishing that Schnabel was not only capable of achieving such a feat with his very first film, but replicating his success three more times over the coming years. Julian Schnabel has been making films for twenty-five years now, has only five narrative features to his name. Four of these are biopics of real-life artists, each exploring how their subjects managed to create art in the face of potentially crippling obstacles: addiction and poverty in the case of Basquiat, homophobia and fascism in Before Night Falls, mental illness and social ostracization with At Eternity’s Gate and disability and infirmity in The Diving Bell and the Butterfly. Each and every one of these its own distinct triumph. Few filmmakers can be said to possess such a robust and lucid command of the cinematic form, creating works that feel both so personal and so collaborative, so organic and free, yet so functional and wise. More than with any other filmmaker, his films feel like multimedia experiences.

“I painted that for a friend of mine who died”

Schnabel turned his attention to film with Basquiat, perhaps his most underappreciated work. The first commercial film made by an artist about an artist, the film stars Jeffrey Wright in the role of graffiti artist Jean-Michel “Samo” Basquiat, who rose out of the New York scene in the late ‘70s, a time when punk, rap and street art were newly coalescing into what would become hip-hop culture. Basquiat’s art was political and anarchic and invested with a vitally impetuous sense of wit. He was a fascinating figure, made no less so by the film, which has an unhurried freewheeling energy that emerges from the warmth between the characters.

Schnabel was a contemporary of Samo and a version of himself features in the film, under the name of Albert Milo, played by Gary Oldman, and whose children are played by Schnabel’s own. Therefore, though it is certainly tempting to accept Basquiat uncritically as a sincere tribute to his friend, it’s hard not to see it equally as Schnabel’s portrait of himself. None of Jean-Michel Basquiat’s real paintings appear in the film; all the art we see was instead done by Schnabel, attempting to replicate the spirit of Samo’s work. So in a very real sense, the artist he is portraying is himself. Whenever anyone in the film refers to a work of Samo’s, it is in fact, a Schnabel that we see, albeit one painted with Basquiat’s personality. Perhaps some will find the concerned humility of the Milo character more egotistical a move than a direct self-aggrandisement.

All filmmakers, of course, express themselves through their art, and time and again, Schnabel has been drawn back to the well of meditation upon the creative process. His most recent film At Eternity’s Gate is the most overt in this regard though, with his films more often exploring the nature of the artistic sensibility. Schnabel’s characters are not merely artists; it is as if they are sustained by their work, creating out of a compulsion, like doodling on a notepad. In Basquiat particularly, Jean-Michel routinely draws for the sake of it, on tabletops and menus, images of no value, beyond a desire to take something mundane and make it a cypher for something else, some part of his own personal narrative of the world. In The Diving Bell and the Butterfly (the best of Schnabel’s works) this sense of artistic sustenance seems almost literal, the film’s subject passing on seemingly as soon as he runs out of book to write.

“Everybody wants to get on the Van-Gogh boat”

From its very first moments, Basquiat marked Schnabel out as a filmmaker with sense of romance entirely his own. It opens incongruously enough with the strains of Kirsty MacColl and the Pogues’s holiday classic “Fairytale of New York” playing dramatically over the credits, which are intercut with the film’s first scene: a young Jean-Michael Basquiat, taken as a boy by his mother to a gallery to see “Guernica”. Upon witnessing Picasso’s frightful masterwork, she is moved to tears and he is moved to grow a glowing, halo-like crown – a common motif in Basquiat’s painting. As the credits conclude, we cut instantly to the grown-up Basquiat (Jeffrey Wright), sleeping in a cardboard box in Tompkins Square Park, and we hear the opening monologue from René Ricard (Michael Wincott) as he muses – in a tone that is outwardly satirical and inwardly sincere, and typical of the film we have just begun to see – on the myth of the starving artist.

We then begin to see Basquiat, or “Samo,” go about his day. As he does so, he creates art, as some might call it. He sees surfers riding the clouds and writes sentiments on walls that imperfectly straddle the line between social criticism and nonsense. His speech is full of this sort of inscrutability as well. When he tells his mother, who is now being cared for in a convent, that he’s getting married, she rightly ignores it as the same kind of ultimately meaningless statement. In one scene he enrages his girlfriend Gina (Claire Forlani) by painting on her dress.

Such a character could easily become wearing, but thanks to the vulnerability of Wright’s career-best performance, Jean-Michel never does so. Somehow relaxed and confident yet effete and emotionally guarded, he perfectly captures what those fascinated by artists continually try to attain. He embodies the so-called ‘artistic temperament’, a man who thinks in paintings and speaks in curtailed poems. In one of the film’s most oddly touching scenes, Jean-Michel imagines a stack of car tyres in his studio, paints them white and stands back, finding them transformed into a sapling. Gina then comes home to find him passed out from a heroin overdose.

The ‘artistic temperament’ may be a cliché, but its one whose ambivalence and tragedy has never more simply or honestly expressed. As Schnabel would have his viewer understand him, Basquiat’s drug dependency, though it was what ultimately claimed his life, was another part of what made him who he was. Perhaps it was how he reconciled himself to everything around him that he was unable to make beautiful. In this regard, the film is refreshingly non-judgemental and sympathetic in its treatment of its subject; after all, in order to admire someone, one must first accept them.

As with all of Schnabel’s subsequent films, he assembled an astonishing ensemble cast. The bohemian atmosphere is added to by the A-listers who keep turning up, as well as its impeccable jukebox soundtrack. In one of the film’s funniest moments, Jean-Michel approaches Andy Warhol (David Bowie) and Bruno Bischofberger (Dennis Hopper) in a restaurant and tries to sell them some of his “ignorant” paintings. The film has a delicious attitude towards art, seemingly placing it at the centre of all human endeavour, but any single piece of artwork is comically absurd, as is the art world. Jean-Michel mounts one of his paintings by nailing it directly to the wall. When Ricard tells Basquiat that one of his paintings “made [him] ashamed to own anything”, we believe him, and perhaps find his sensitivity endearing, but it’s still a ridiculous thing to say. Schnabel’s own cypher character Albert Milo instead offers a succinct “I like that” and then invites Jean-Michel over for dinner.

Though the film has an undisguised affection for the art community, it never attempts to hide its more asinine, ignorant and exploitative sides. It merely treats them with amused, creative indulgence, like children, their innocent enthusiasm and appreciation for art is what unifies and redeems every character in Basquiat.

His elliptical, almost contrarian nature comes to a head in one of the film’s best scenes, where Jean-Michel is interrogated by a predatory interviewer (Christopher Walken) trying to get under his skin. For five and a half minutes, the interviewer watches Jean-Michel for any sign of weakness, anything he can use to portray him as problematic, a fraud or incendiary. Jean-Michel’s inscrutable contrarianism becomes an effective defensive tactic. When asked “Do you consider yourself a painter or a black painter?” he counters “Oh, I use a lot of colours, not just black.” 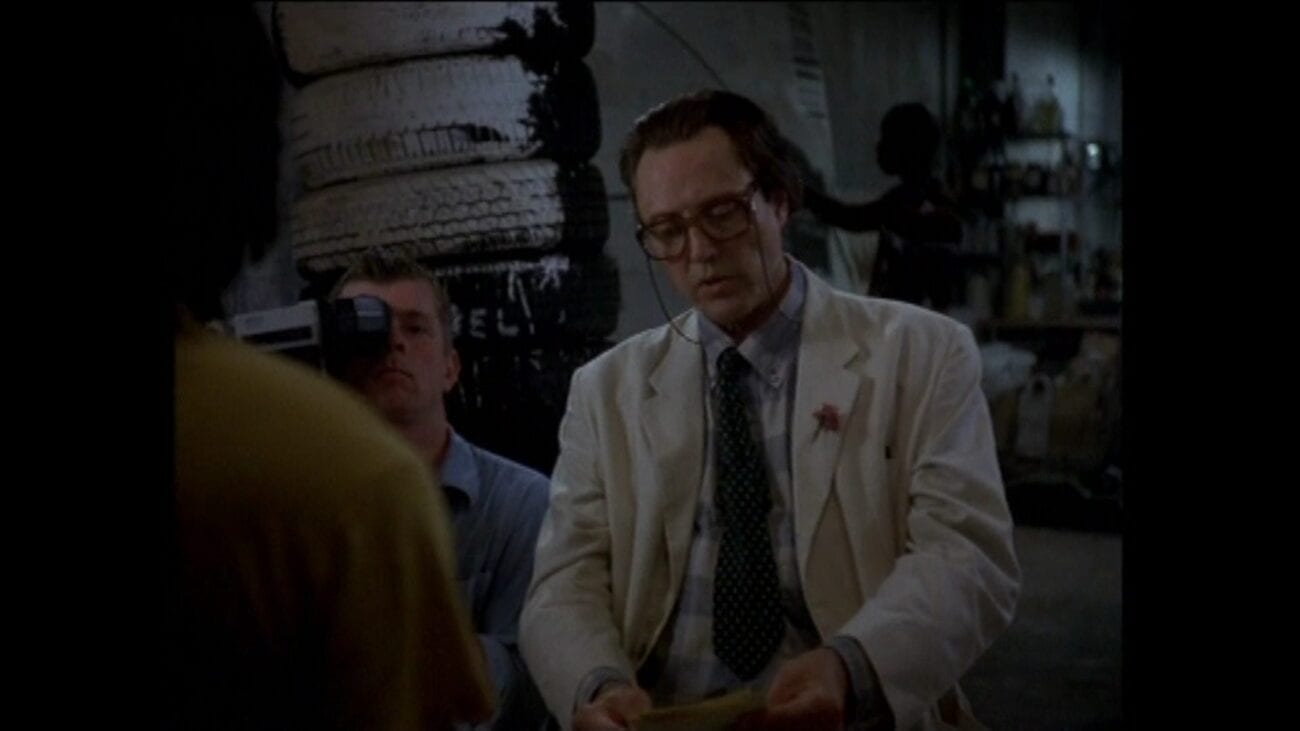 Race is a vexed issue in Basquiat. Ricard is shown repeatedly using the ‘n’ word in camp appropriation, fatuously proclaiming “I may be white, but I’m a n—-r”. Jean-Michel visibly winces at this, but then spontaneously immortalises the moment, adding René’s name to one of his artworks, significantly, written in white. René is visibly touched, but after he leaves, Jean-Michel paints him out, just as significantly, with brown.

The familiar tropes of the rise and fall of the tragic artist are certainly present in Basquiat, as Jean-Michel goes through the familiar cycles of obscurity, romance, sudden success, fame, addiction, dependency, infidelity, and ultimately isolation. However, the elliptical approach of Schnabel and co-screenwriters John Bowe, Michael Holman and Lech Majewski keeps the whole feeling spontaneous and sincere, without ever falling into the mundane realm of tragedy. Above the satire and the sardonicism, it’s the relaxed vitality and ever-present humour and humanity that rises to the top of all of Schnabel’s filmed works. Better than any other filmmaker, Schnabel finds the soul of his subject – or perhaps just of himself – and places it onscreen, and twenty five years on, Basquiat remains his most personal and idiosyncratic film and one of the most underrated American films of the 1990s.