’Is WandaVision the Origin Story of Phase Four’s Biggest Bad?’ is now available on Audio, read by author John Bernardy, exclusively for our Patreon supporters. For just $3 a month you will have access to our full library of Audio content, plus three new uploads every week. To sign up visit our Patreon page: https://www.patreon.com/25YL

I think we’re getting a satisfying conclusion to WandaVision this Friday, but I don’t see us getting too much catharsis. Wanda may even be able to pull her different sitcom era looks together like Monica did and become an ultimate version of herself, but she’s not going to get everything she wants. And she’s not going to be suddenly healed. I suspect her kind of trauma is going to take a whole Phase to untangle. I think what we’re really seeing here is the most sympathetic origin story possible for Phase Four’s Big Bad, Wanda Maximoff.

Agatha is not a hero, but that doesn’t make Wanda a hero by default

Just because Wanda will likely defeat the power-hungry Agatha Harkness in the final episode, it does not mean that the day is won, nor does it automatically make Wanda a hero. The true victory of WandaVision will be when the residents of Westview are freed from the mental puppetry Wanda is subjecting them to. But that will likely not be a sign of Wanda’s pain being fixed. The town’s freedom probably won’t even be due to Wanda realizing her hubris.

Honestly, Agatha might be the one who frees the people of Westview, but that won’t be from heroism, just a byproduct of trying to tap into Wanda’s power. Agatha doesn’t really care about the citizens of Westview either.

After criminally underusing early villains (Lee Pace’s Ronan, anyone?) Marvel has finally figured out how to consistently do villains correctly, and I think WandaVision is upping that ante admirably. Wanda is hurting from all the loss throughout her life, but she’s also hurting the residents of Westview and holding them hostage.

It appeared Wanda was on her way to redemption with all those glitches in the seventh episode—including the furniture glitching backwards to black and white style, and the boys’ video game controllers going back through the generations back to Atari and then Uno cards. But in the next episode we learn that was not the empathetic part of Wanda asking herself “what am I doing?” It was Agatha trying to bring things back to the beginning and force a breakthrough. But Wanda didn’t want to change. She just wants to live in a bubble with Vision where they’re safe from the world that traumatized her.

Wanda knows exactly what she’s doing. She comes right through her reality barrier to confront Hayward and his SWORD team and and threaten them to mind their own business. Wanda is using her agency to actively brainwash people and maintain her illusionary life with Vision. That’s it. Wanda isn’t using her agency to make things right, whether it’s with the world or her heart. She would rather rewrite reality to isolate herself in a delusion than be a part of the world.

We all want Wanda to be the hero she can be

I want Wando to be a character who gets better and finds the hero within herself. This want is why she’ll be a compelling character as she learns how to come to terms with the tragedy that’s happened in her life. The actual PTSD of war, both as a child and as a participant, all the “what she could have dones”, These are compelling things. And when she actually can rewrite reality around her, it feels like she is doing something. Even though all she’s doing is removing the agency of the residents of Westview while she retreats inside herself.

This reminds me of one of the most tragic members of Batman’s rogues gallery, Mr. Freeze from Batman: The Animated Series, as voiced by Michael Ansara. Freeze’s heart is cold and emotionless to everyone outwardly, but his focus is only on reviving his frozen wife back to life and healing her to the point they have a life together. 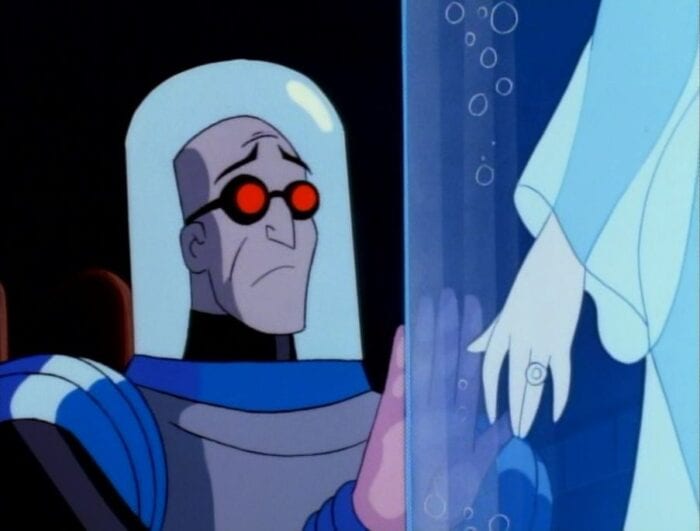 Freeze is absolutely compelling as a villain, and earns empathy while proving over and over again that his grieving process is not being done in a healthy or legal way. Endangering and stealing from bystanders is not made right just because his reason is to save his wife’s life.

The Sorry For Your Loss depths Elizabeth Olsen can reach may not be as chilly at first glance here, but Wanda’s empathy is similarly frozen while creating a safe place for herself and her lost love.

Where do we go from here?

If WandaVision undoes Westview’s reality barrier at the last dramatic second, it’s not going to feel believable for an entirely happy ending. Wanda might finally understand what she’s been doing to all those people and then make a sacrifice that pulls her into the multiverse. Or maybe she’s going to intentionally retreat into her powers and look for an alternate reality where her Vision still lives. But based on Wanda’s lacking empathy up to now, I suspect her actions in future Marvel movies will do to the Multiverse what she did with Westview. Our hearts will hurt for her because we’ll know what she’s feeling, but the damage will continue to grow.