Welcome to What’s the Buzz, 25YL’s feature where members of our staff provide you with recommendations on a weekly basis. In our internet age, there is so much out there to think about watching, reading, listening to, etc., that it can be hard to separate the wheat from the chaff, filter out the noise, or find those diamonds in the rough. But have no fear! We’re here to help you do that thing I just described with three different metaphors. Each week a rotating cast of writers will offer their recommendations based on things they have discovered. They won’t always be new to the world, but they’ll be new to us, or we hope new to you. This week, Hal Kitchen recommends Junji Ito’s Uzumaki (and other manga), and Hawk Ripjaw checks out Monster Hunter from Paul W.S. Anderson.

Hal: Within manga, few names are more synonymous with horror than Junji Ito. Manga isn’t traditionally a genre associated with horror—more often with dazzling action and vibrant melodrama—however, there is great potential for horror within the genre. If the mind can visualise it, it can be brought to life by a sufficiently talented artist. Similarly, it’s long frustrated me how little horror animation there is out there, with most of what does exist coming in short form. Short form is usually what Ito does, and he is best known for his collections of horror short stories, with titles like Shiver, Fashion Model, and my personal favourite, The Long Dream. His best known titles are his two longer form multi-volume books though: Gyo and Uzumaki.

Uzumaki, though longer form than his short stories, shares many structural similarities with them. The book is highly episodic with each chapter being its own contained short narrative. These chapters are unified by narrator, setting, theme, and a common sense of escalation as the book continues. The narrator in each case is Kirie Goshima, a high schooler in the small coastal town of Kurouzu-Cho, a town we soon learn is contaminated by a mysterious and insidious influence. It’s the influence not of a disease, a monster, or any antagonist, rather, Kirie’s hometown is contaminated by spirals.

Spirals begin obsessing its residents, drawing them in and causing them to replicate them, first by merely sculpting them, and then using their own bodies. Body horror is a common theme in Ito’s writing, and central to his skill as an author is his ability to manifest the most acutely detailed images of the human body contorted into nightmarish poses and shapes, all while maintaining the most uncannily lifelike qualities. With each chapter of the book, as witnessed by Kirie, a different resident of Kurouzu-Cho falls victim to the spiral, each in their own horrific way that is a dark reflection of their inner characters.

As the stories go on, they do take on ever more cosmic proportions, as one after another of the town’s residents falls into the ever-expanding influence of the spiral pattern. However, the stories and images gain their charge not merely from their outward horror, but from the common social anxieties they articulate. Ito draws his characters in broad strokes—some characters are slow and always late for class, others love to be the centre of attention, while others would rather shrink into the background and disappear. Equally striking to his images of bodily corruption and decay are Ito’s more familiar images, and his ability to express sadness through his drawing is as central as his ability to express mania. Whatever the case, the spiral finds a way to trap each of these characters in their own personal hell, and a particular horror is the way they are not only helpless to prevent having their own desires turned against them, but in how often they find themselves drawn willingly into their own annihilation.

Each of these chapters follows the structure of one of Ito’s shorts. Having a witness to the horror be the narrator allows him to introduce a new character and establish an obsession that slowly consumes them before having this character disappear mysteriously. Then, of course, our inquisitive narrator goes to investigate their disappearance, leading to the final moment of horrific revelation, where Kirie discovers what has become of her acquaintance. This reveal is often deftly concealed just over the page, putting a reaction image in the final panel of the preceding page, building anticipation for the grotesquely defiled human body awaiting on the overleaf.

Each chapter does fall into a recognisable pattern like this, but Ito is so wildly imaginative that each chapter approaches the central image of the spiral in such an alarmingly novel and revolting direction. There are spirals everywhere in the natural world, in whirlpools, in gusts of wind and plumes of smoke, in snail’s shells and in hair, and even within the human body, and Ito seemingly never runs out of ever more macabre variations to put on his theme. If you’re unfamiliar with Ito’s work, there’s really no bad place to start, but Uzumaki is as good a one as any, being as varied as his short stories but as lasting and satisfying as any horror novel. 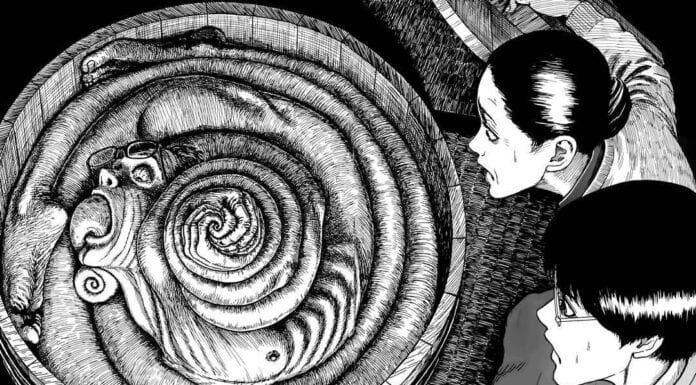