Joe Turner: I hope so.

Conspiracies should leave you cold.

They should take place in buildings made of glass and metal, with characterless minimalism decorating the lobbies, and indistinguishable suits.

Of course, conspirators could live in the shadows, but somehow that defeats the point. There is no point in standing in opposition to the powerless. Conspirators are always in control, or at least they seem that way.

We are the ones lurking, trying to stop the disaster before it strikes. We must be veiled in shadow because you don’t destroy a conspiracy by asking nicely, you tear it down, brick by brick.

But ultimately, the audience is left with a straight spine and a feeling of coldness, because you can never completely destroy a conspiracy. Cut off one head and two more immediately spout. 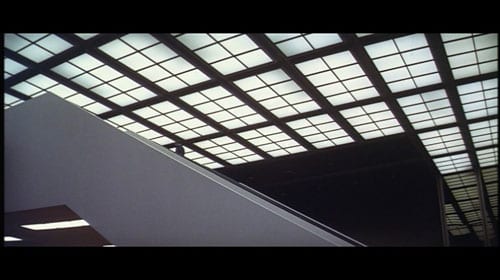 These are the aesthetics of conspiracy thrillers that have been, in one way or another, at the forefront of Western pop culture for decades. Three Days of the Condor, The Parallax View, The Manchurian Candidate, The X-Files, Mr. Robot, even Captain America: The Winter Soldier all belong to this genre, among untold numbers of films and television shows and yes, even comic books.

What unites these texts, of course, is the underlying sense of malaise, the paranoia that rightfully eats away at the protagonists and leaves them dangerously isolated. Dangerous to themselves, but also, crucially, dangerous to the conspiracy.

This Friday (March 19, 2021), the first episode of The Falcon and The Winter Soldier drops on Disney+. Now, as someone who was very much a Captain American Girl, I’m excited for this show and I have avoided spoilers like they carry COVID-19.

The Ed Brubaker run of the Winter Soldier comic book in 2012 contains some of my favourite issues in all of Marvel comics, partly because at the time I was a melodramatic teen who loved the Sad Boy Drama aesthetic and the angst of the Bucky and Natasha romance.

Plus ça change, am I right?

But really, the point is this—we can make the reasonable assumption that this show is going to play with, and engage with, the tropes of conspiracy thrillers. After all, in 2014 I yelled when I realised Robert Redford had a role in Captain America: The Winter Soldier because I just knew that meant he was playing the bad guy, and I was excited about the thematic implications of having perhaps the most famous stars of the ’70s conspiracy thrillers that I loved playing the villain in a movie that was very much inspired by those same films. To quote another superhero film that borrowed heavily from conspiracy thriller aesthetics: “You either die a hero or live long enough to see yourself become the villain”.

Nowhere is that more true than in conspiracy thrillers. So, in that vein, being forewarned is forearmed, so let’s have a look at some of the themes and ideas that we can expect from Falcon and The Winter Soldier.

As Travis Ratcliff pointed out in his excellent video essay on this topic, conspiracy thrillers are about how we relate to institutions, and the ways that this relationship changes and evolves over time.

Of course, in a film like the superlative All The President’s Men (1976), we are dealing with the very real investigation of the Watergate scandal, so the US government is of course the heart of the conspiracy. Director Alan Pakula chose to shoot this film with the complicit locations—the White House, the Capitol, the fancy looming landmarks of Washington D.C.—staring at Woodward and Bernstein from the background. But this focus on institutions remains consistent across conspiracy thrillers, even if the institution in focus has changed over time.

The original Manchurian Candidate adaptation (1962) features American Cold War anxieties discussed with surprising nuance and care. Frank Sinatra’s Bennett Marco offers Lawrence Harvey’s brainwashed assassin Shaw nothing but compassion and understanding, with the ire of the characters and the film itself directed instead towards Shaw’s manipulative mother, Eleanor Iselin (Angela Lansbury). This is retained, to an extent, in the 2004 Denzel Washington-led remake. However, in this version, the captured soldiers (in the Gulf War, rather than the Korean War, of course), are brainwashed by a sinister private equity firm. The terror of communists clearly doesn’t thrill the way it used to.

By the time we get to 2014’s The Winter Soldier, we have a film in direct conversation with the revelations about the NSA brought about by Edward Snowden, as Captain America is pushed and angered and cornered into burning the Marvel Universe’s surveillance state to the ground. When I tell you I cackled in delight, I want you to fully believe me.

There will always be a boogeyman for our protagonists to rail against.

It’s vitally important that our heroes are hunted and placed in a position of vulnerability—gaslighting has always been an important part of any conspiracy worth its salt, after all.

That’s especially true of Pakula’s The Parallax View (1974), recently released via the Criterion Collection. Through the film, Warren Beatty’s Joe Frady is gaslit and led around by the nose, trying to uncover the core conspiracy of the film (in this case, the mysterious Parallax Corporation is hiring people to assassinate political targets in an easy frame-up operation). There’s a fascinating contrast between the characterisation of Beatty and Robert Redford’s protagonists.

Redford radiates decency—if he asked me to jump off a bridge to my death, I’d do it. I would assume he just knew something I didn’t. Beatty on the other hand resembles an impish agent of chaos. Frady’s main tactic in undermining the conspiracy in the film is to pettily screw with them as much as possible. A far cry from Woodward and Bernstein’s idealism, and Joe Turner’s determination to survive.

Frady even claims halfway through the film “Money doesn’t mean anything to me”, a character trait I am inclined to believe judging by his lack of self-regard displayed throughout the film. This trait creates a notable forward-looking parallel to Rami Malek’s Elliot Alderson of Mr. Robot, nonchalantly telling his first hacking ‘victim’ (a café-owning paedophile) that he doesn’t give a sh*t about money.

Which is precisely the point.

It’s not like anyone will thank the protagonists for lifting the veil from the public’s eye. It’s not like there has ever been money in journalism, or investigation, or sticking it to The Man. You’d have to be a fool to be in it for the money. So instead these protagonists are driven not only by their own pain as caused by these conspiracies, but also by a quixotic sense of something resembling justice.

However that’s not to say that these characters are successful in their quests. In fact, it’s often that same quixotic quality that causes them to fail. A championing of the rights and dreams of individuals will, I’m afraid, always be fighting an uphill battle against the self-interest and greed of the conspirators.

I keep coming back to the scene in The Winter Soldier in Nick Fury’s hospital bunker. In this moment, Steve Rogers has spent the entire film feeling adrift, gaslit by his new-found friends at SHIELD and reeling from the revelation that his best friend has spent the last 70 years being tortured and brainwashed by a cell within SHIELD itself. “Maybe we can salvage it”, Nick Fury suggests in their planning, referring to the surveillance system designed by the organisation that is under the control of the Nazi-led HYDRA. Steve looks at him in steely disgust—“We’re not salvaging anything”, he says.

Burning it all to the ground is the best that can be hoped for.

Moments of triumph in conspiracy thrillers are hand grenades thrown directly into the path of the conspirators—momentary victories that often cause more destruction than the conspiracies themselves. These protagonists must be willing to live with the chaos they cause, because fundamentally, they are opposed to the order as imposed by the conspirators.

For what price are we willing to erode our own freedoms? How much control do we grant our institutions before we realise we’ve made a terrible mistake?

Ultimately, conspiracy thrillers are about the way we relate to institutions, and more specifically, how those institutions chew up individuals, before spitting them out when no longer of use. It’s no coincidence that the protagonists are often military veterans, Sam Wilson’s Falcon and Bucky Barnes’ Winter Soldier very much included.

These are cold, cruel films, that most often suggest that self-service, greed, and laziness will always trump our individualised morality. Frady is framed and assassinated, Joe Turner mulls over the use of his actions, even Sinatra’s Marco is left devastated by the revelations about his friend.

There’s not much hope when you confront institutions. Saying anything else would be a lie. The only real hope to be found is in the quixotic heroes—who fail knowingly, but somehow still believe that it’s worth it.

And only you can decide whether it is for yourself.

More From: The Falcon and the Winter Soldier