E.A.’s stronghold over the Star Wars gaming license is over! Ubisoft’s team behind The Division is about to embark on a massive open-world game set in a galaxy far, far away. With the possibilities once more given to the fans, there’s a collection of Star Wars games dating back over thirty years ago to choose from.

The following is split into remakes, sequels, and game that never came out.

After 18 years from Jedi Outcast, we still haven’t found a lightsaber fighter or Star Wars shooter as natural as Kyle Katarn’s games. Fortunately, someone is working on it right now. Jason Lewis, a senior environment artist at Obsidian Games, is creating a fan version of the original 1995 first-person shooter Dark Forces. Whether it gets shut down by Disney or Lucasfilm is to be determined.

Considering how the nearly complete fan version of Knights of The Republic was halted, it wouldn’t surprise me if this game ceases to see the light of day, potentially being revealed in a leaked link like the 2007 remaster of Goldeneye was.

For a “Doom clone,” Dark Forces holds up despite its archaic MS-Dos design thanks to the level’s advanced structure. Various switches, panels, and platforms with no safety railing play out like a convoluted maze. By today’s standards, you’d want to tear the hair out of your head. Still, I appreciate how it engulfs me in the world of Star Wars.

With a new engine, including new level design made by a company with a large budget, Kyle’s story can be thrillingly retold. It could perhaps even be canon. The first level in Dark Forces involves stealing the Death Star plans, rendering the epic battle in Rogue One a bit overdone. What if you could participate in that battle while maneuvering through various deadly enemies in your aid to assist Jyn Erso on her mission?

The level would start like the D day levels from Medal of Honor but would be with a wide-open map where you can tackle your objectives in any given order. After participating in a massive ground battle, you can take to the Imperial base corridors. Outside is pure warfare. Inside the Empire’s base are frantic troopers anxious to kill you. Each game would retain the originals’ design but would feel utterly new at the same time.

Hopefully, finally, someone can perfect the lightsaber gameplay from these games. Jedi Fallen Order is one of my favorite Star Wars games. Its lightsaber battles felt incredibly underpowered, however. Why does it take multiple hits to kill someone? Why do animals and robots get chopped to pieces but not Stormtroopers? Shouldn’t a lightsaber instantly cut something? The mechanics from the lightsaber fights in the Jedi Knight games contains none of those flaws. Watching your lightsaber cut up the wall as you casually run past it made me feel invincible. Your lightsaber should repeatedly hit your Sith opponent’s saber until you land that lucky strike dicing them into Bantha food.

Dark Forces is a series begging to bring in fans of all generations that can seriously connect to Disney’s new timeline. Just keep the originals available on P.C. plus console as well for historical preservation.

If there weren’t legal red tape blockading dreamland, we would have had Star Wars: Rogue Leaders, which would have been available on the Wii years ago. Factor 5’s Red 10 Julian Eggebrecht stated on IGN in 2017 that the Switch would be the only console that could correctly input all of the controls available to Rogue Leaders. The gyro controls could be used for aiming your blasters when engaging in dogfights. Indeed, the leader of the helm of those games is on board. Mr. Eggebrecht went even further, elaborating that even in 1080p, the 2001 sequel game holds up incredibly well in that resolution. With all these pieces in place, why not just discharge the tragically unreleased Rogue Leaders on Switch?

Bringing out the Rogue Squadron trilogy is the perfect opportunity for future generations to witness the greatness of Factor 5’s work. To this day, the sequel to the 1998 original is a staggering achievement in Star Wars authenticity. From destroying the Death Star to tackling walkers in Hoth, or taking out multiple Star Destroyers, re-experiencing the trilogy on the fly with gyro controls that you could share with your friends would be a welcome addition to the Nintendo family. Not to mention, co-op could be implemented towards each campaign. Rogue Squadron is perfect for co-op team coordination since squad communication is in its very title.

Star Wars Rogue Leaders would be a Nintendo money maker. If they can release Super Mario 3D All-Stars in its half-complete glory from the very company that requires a seal of quality, Factor 5 could prove a worthy addition in a nostalgic road trip down beggar’s canyon.

The 2002 game was as indistinguishable as any muddied graphics early PS2 era title. Guess what, though? Boba’s officially risen from the grave with The Mandalorian. The impending December release of The Book of Boba Fett is the perfect opportunity to expand upon Boba’s story beyond the show. Whatever the plot will be is yet to be witnessed. What’s for sure is there’s always part of the story fans wish they could have seen. That’s where Bounty Hunter II comes in. Rather than rushing the design like the original game, which is more or less a movie tie-in cash grab, “Bounty Hunter II” can be the official gritty game fans were robbed of when Star Wars 1313 was canceled.

Here is the opportunity to release the more mature Star Wars game that fans have been starving for. A chance of redemption when Disney’s buyout of E.A. consumed 1313 like a hungry Krayt Dragon. Imagine an open world as Boba Fett, flying across planets, acquiring bounties, building his story, customizing his gear. You can explore the deepest depths of the Bounty Hunter world. Work or fight IG88 or Bosk. Boba is a goldmine of new opportunities to explore the seedier side of the galaxy in exquisite detail. 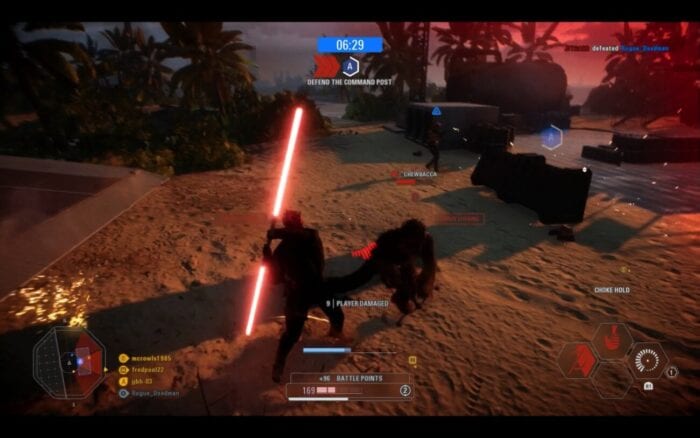 E.A.’s Battlefront series has been an unmitigated disaster setting the precipice to tread lightly with microtransactions. Battlefront II in its current state is an enjoyable experience not shared amongst everyday players due to its terrible reputation. Expectations from the series were never fulfilled. Available features presented in the 2004 original were inextricably taken from the E.A. reboot.

How good would Star Wars Battlefront III be if it included the following:

Whatever modes I missed from the original, I humbly apologize for. With the following four suggestions above, the game sounds incredibly familiar to another game series, doesn’t it—a bit like Battlefield made by the company DICE. When you hire a particular company to make a type of game based on the design they’ve used in the past, then you hired them to make their version of your franchise. You hire Bioware to make an RPG. You hire Infinity Ward to make your arcade first-person shooters, and you hire DICE to make your integrative FPS.’ People loved to complain before 2015’s Battlefront that it was going to be a reskinned Battlefield. DICE should have ignored their complaints (if they did) and made precisely that because that’s what the fans always wanted.

The main complaint about the new Battlefront series, aside from its greedy past practices, is its over simplicity. There were no classes in Battlefront 2015, and only the original trilogy era was available. Battlefront II doubled down, bringing in 4 classes, all Star Wars eras, and the point system allowing you to spawn as any hero or vehicle after acquiring a certain number of kills. All of which were welcome changes that weren’t enough.

How could features from 2004 and 2005 be more immersive than those from 2015 and 2017? It’s great to have classes, but why am I capped out at only four weapons? Spawning in a Battledroid Tank is fantastic, but why can’t I get in and out of it? Why can’t other party members use different ship aspects to kill enemies? For instance, I operate the battle tank; someone else controls the turrent. My hand to the sacred Jedi texts, you know you would love that game.

1. Knights of The Old Republic III-SEQUEL 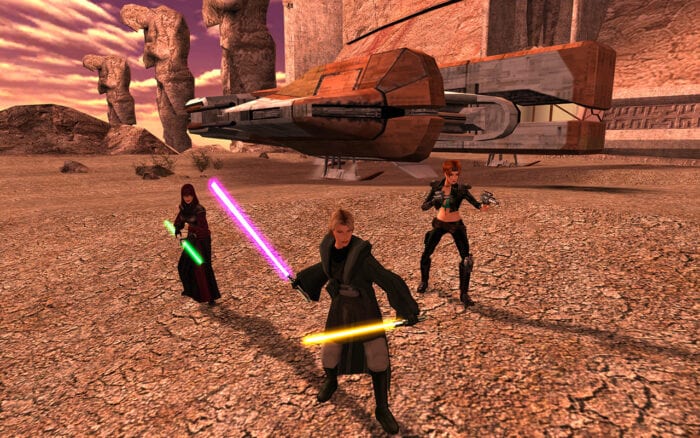 KOTOR II was easy money in a way, but it doesn’t exclude some of its strengths, any of which I wouldn’t know since I intentionally skipped that game based upon its reputation of being more filler than anything. The story of Darth Reaven’s path along with his/her allies should be continued. Games have evolved since 2003, but KOTOR’s mechanics have lived on years past its release. Expanding upon one of the greatest games is a monumental task that will take bravery hurdling. The rewards regarding that hurtle would be far greater than its failures.

Drawing inspiration from the Final Fantasy VII Remake (minus the whispers), the battle system could be interactive, requiring real swordsmanship in the lightsaber exchanges. Blaster combat could play the way gunfights do in “Mass Effect” but with force powers. The worlds can be grander, more interactive than the original. Where Revan, Bastia, Karth, Mission, Zaalbar, Juhani, and Jolee go will be fascinating to see. The ending would depend once more upon your actions. More intricately this time around where your decisions can have consequences.

Not only would it be a great Star Wars game, but possibly even better than one of the most well-regarded games in history, cementing Star Wars as a gaming force to be reckoned with.