Later this year, Marvel debut their animated series What If…? which explores alternate universe takes on classic Marvel universe stories, but one unlikely to appear is this: what if The Falcon and the Winter Soldier had been the first Disney+ MCU series released?

Thanks to Covid-19, like with much else in the world of culture and entertainment, plans changed. TFATWS, as I’ll shorten the title for expediency, was forced to shut down production before a long-planned August 2020 release date, theoretically in the wake of Black Widow’s cinematic arrival in May 2020. WandaVision, originally due in December, turned out not just to be the first new Marvel Cinematic Universe property to appear on the incumbent streaming service but the launch, unexpectedly, of ‘Phase Four’ in the long-running Marvel saga, or as I extemporise on in my book, those first three Phases should perhaps be considered ‘Season 1’ of the cinematic TV series that is the MCU.

If we look at Phase Four in the context of a ‘Season 2’, then TFATWS makes far more sense as a season premiere than WandaVision, an offbeat slice of mystery box experimentation, ever did. It could be argued that Black Widow was designed for this role but given it appears the Scarlett Johansson-picture is set largely before the events of Avengers: Endgame and serves more as a swan song, that is open to debate; similarly Spider-Man: Far From Home, which tailed Endgame in the summer of 2019, a film serving more as an epilogue to the third phase. Neither of those stand as clear candidates for a semi-relaunch whereas TFATWS clearly has aspirations in this regard. The first episode of what stands to be a limited series is called ‘New World Order’. The intent could not be plainer.

Yet in some sense, TFATWS also serves as part of the epilogue to Endgame, certainly in this premiere. Far From Home and WandaVision both explored the consequences of ‘The Blip’, aka the moment Thanos the Mad Titan wiped out half the universe with the Infinity Gauntlet only for them to reappear five years later, in different ways. Far From Home played it a touch for comedy and skipped over the psychological consequences and WandaVision played with it as background, using it as a framing device through Monica Rambeau to explore less the personal costs for those ‘blipped’ (and those who stayed behind) but what it turned government entities and nation states into. TFATWS looks set to combine both of these aspects into what Malcolm Spellman’s series will explore—not just loss but legacy.

TFATWS’ title is two-fold. The post-Endgame ‘New World Order’ within the MCU has yet to be fully constructed but it appears to be a world without a concrete, established superhero structure of protection with Tony Stark & Natasha Romanoff dead, Captain America gone (and as we see in the eulogy Sam Wilson (Anthony Mackie) gives here, assumed dead), and the rest of the Avengers having moved on in different ways. Wilson, as the Falcon, is now operating as an agent for the U.S. government, dropped into the Tunisian skies by the Air Force to fight a terrorist organisation as we see in the opening action sequence (which reminded me of the jet vs alien ship canyon shootout in Independence Day at points), but he appears to be a lone entity these days. He’s had a substantial suit upgrade, perhaps to distinguish him from the Avengers he was long in the shadow of, but the team structure around him no longer exists in the same way.

At the same time, the title leans toward the wider aspects of TFATWS’ place in the MCU landscape. WandaVision broke through and captured audiences at the start of 2020 starved both of Marvel content and storytelling built on mystery and theory, but it remains an unorthodox beginning for Marvel’s ambitious plan to use Disney+ as a means of transforming the MCU into a multi-platform operation. TFATWS looks, certainly from the way ‘New World Order’ takes time to establish where Sam & Bucky ‘the Winter Soldier’ Barnes (Sebastian Stan) stand post-Endgame, to be a six-hour movie in all but name. The opening action salvo matches anything we have seen the MCU deliver on the big screen and intentionally mirrors one of two MCU films TFATWS is taking the biggest cue from – the geopolitical machinations of Captain America: The Winter Soldier and Civil War. Falcon even battles a resurgent Georges Batroc (Georges St Pierre), a close-combat Euro-villain last seen troubling Steve Rogers on the Lemurian Star at the beginning of The Winter Soldier. 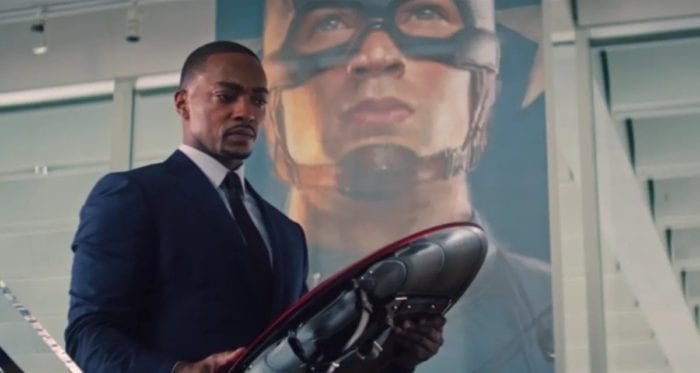 TFATWS therefore is designed to carry the MCU into its own new world order, an era of broader multi-platform storytelling feeding in and out of theatrical experiences, an era which could well breed an entirely new mode of storytelling should other major franchises, such as Star Wars, repeat the trick. That puts quite an unexpected weight on the shoulders of a series that, on the evidence of its opener, could wear it well. Spellman and director Kari Skogland (who previously helmed the episode ‘Resupply’ for The Punisher Netflix series) work to continue the aesthetic style put forward in the previous two Captain America films and provide the series with a clear, recognisable base to rest upon. WandaVision threw everyone for a loop. Loki might well do the same. TFATWS immediately makes sense as continuation of established MCU ideas and concepts. To some, it might even appear staid compared to how broad the MCU’s reach now encompasses.

For me, ‘New World Order’ was something else: steady and resonant. So many major franchises these days are sacrificing character work at the altar of furious plot and action dynamics—the modern Star Trek series’ are a particularly egregious example of this and are suffering as a result. TFATWS has the confidence not to rush. After reminding us of what Falcon can do, Spellman then calmly places us down the mirrored thematic stories of Sam & Bucky before their worlds collide. It gives us an hour for the kind of character development MCU films might only have five minutes to spare on. Both of our heroes are feeling the lingering effects of the last few years, in different ways. Both are grappling with what it means to be a hero, and in Bucky’s situation he remains anything but in many ways. And both, particularly Sam, are grappling with the central question the show appears to be posing: what does it mean to be Captain America?

Going into this show, the question on every fan’s mind is precisely who will emerge from this series as ‘the new Cap’. If we go by comics lore, it will be Bucky, given he does traditionally become Captain America post-Steve Rogers, and it could certainly defy expectations in-universe if a former international assassin and terrorist, programmed by Hydra for decades, becomes a symbol of American heroism. Alternatively, it could be Sam both because that’s who Steve chose at the climax of Endgame, and seeing a man of colour take on such a symbolic mantle in an era of Black Lives Matter and wider representation might be a potent choice, on a cultural level, for the series to make. This binary decision could be the wrong question, however. If we are to assume that the new, government-created ‘Captain America’ (Wyatt Russell) unveiled at the climax might not ultimately represent the core decency Steve Rogers embodied, might the deeper question represent America generally. Who will become Captain America? should perhaps be reframed as: what will Captain America become?

This takes us back to the Blip and the reverberations Sam & Bucky feel from it here. Sam attempts to use the resources he now has after working for the Avengers (questioned nicely in comic, prosaic fashion by a nerdy real estate agent) to financially assist his sister Sarah (Adepero Oduye) in her Louisiana seafood business. She resists his help & their relationship has suffered from the five years Sam was ‘blipped’ and missed the vacuum of a world which faced such an existential loss, but on a micro level he is trying to be Cap here: doing the right and noble thing for those he loves. Conversely, Bucky is making amends after gaining a pardon agreement for helping the Avengers—both by exposing corrupt figures linked to Hydra of old and befriending the aged father of a man he murdered while on a programmed mission years before as the Winter Soldier. We have yet to see the Blip, truly, from someone who stayed behind, but Bucky is suffering his own PTSD in this episode at his own legacy, while, again, trying to do the right thing and become a better man.

There is, nonetheless, an instability about both men and their roles and positions which mirrors the world, and the new world order, beyond the Blip. As he counsels Sam, James ‘War Machine’ Rhodes (Don Cheadle) suggests the Blip shattered alliances and left the world, generally, more unstable. A new threat in Europe is now emerging, the Flag Snatchers, designed to capitalise on said instability and promote anarchy, looking to return the world to the state of the five years within the Blip—a potential ‘cult of Thanos’ on an existential level. On this level, the Blip represents perhaps the last five years we have experienced globally in the real world, of striking political, social and psychological change capped off by the trauma of Covid-19. It does feel like we are entering the first ‘new world order’ of the 21st century as we approach this new decade and TFATWS is clearly anxious about this, about what Steve Rogers’ legacy and what Captain America as an idea means in our world and the world post-Blip, and quite how we can reconcile the two.

Sam at the beginning of the episode, discussing the shield, suggests “it feels like it belongs to someone else”. By the end of The Falcon and the Winter Soldier, we may know both who that shield is for and quite what holding it means in an unstable, uncharted new order.