“What does it feel like to be so beautiful?”

That’s a line from the book (and, it turns out, pretty much the title of the very next episode of CBS’s Clarice), and it never made it into Silence of the Lambs. Jame Gumb, aka Buffalo Bill, says it to Clarice Starling as he lies dying, and if you think about it, it sums up his entire motive. He hasn’t been doing the horrible things he’s been doing because he hates women, he’s been doing the horrible things he’s been doing because he wants to be one…because he covets, as said. Does this make him a tiny bit sympathetic? I don’t know, and the line was cut from the film. But it was teased in “Get Right With God”, and clearly it’s going to factor in the next episode, so I guess we’re going to find out.

Clarice Starling really got put through the ringer in this one. When we last left our heroine, she was in the clutches of the bad guys, in a rest home for coma patients. Starling had been investigating whistleblowers on a conspiracy involving a clinical trial, and when she went to a rest home to speak with one of the women involved, she found more than she bargained for.

Starling went to talk to LuAnn Felker, but it turns out that LuAnn is one of the patients, and the attending physician keeping her stuck in that bed (she can see and hear, but that’s it) is her twin sister Marilyn. Marilyn not only is part of the conspiracy, she’s got a long-standing childhood grudge against her sister. Actress Natalie Brown must have had a great deal of fun with this double role (I hope so), and I think she did a good job with it—she doesn’t lean into scenery-chewing, and makes Marilyn frighteningly detached and real.

I’ll be honest with you, it felt a little soon for this storyline, but I get why they did it. This show is betting high, and it is pot-committed, to keep using poker metaphors. A storyline involving psychiatric hospitals and the like might have done better in the second or third season, when this show was more firmly established as its own thing, independent of what I really hate to think of as its male counterpart. It feels like they’re staking everything on one hand, in case they get cancelled. And I can’t say as I blame them. And it’s not like Clarice Starling, with her background in Behavioural Science, doesn’t have as much right to psychology as Whatshisname…but this show is going to live or die by those comparisons, and they walk a fine line.

At the end of the previous episode, Marilyn had just stuck Starling in the neck with a syringe of some kind, and when Starling comes to at the top of S1E5, she’s in a bed like the rest of the patients, and she’s numb from the waist down. Marilyn keeps doping her up, trying to find out how much Clarice knows about the conspiracy, and this causes her to have nightmarish hallucinations. These are cool because we get to see her imagining herself in Buffalo Bill’s pit (with Marilyn up at the top holding the poodle), but art house-style special effects for this kind of thing are definitely Will Graham territory. Thankfully, save for one shot of her eyelashes growing together, they didn’t do too much of that.

When she’s not doped up or has a ventilator tube stuck down her throat (Marilyn Felker isn’t kidding around—she also uses defibrillators as electroshock torture on Clarice), Starling spends her lucid moments sitting up in bed, slamming Marilyn with that Behavioural Science background I mentioned. She doesn’t come right out and say it in Latin, but when she tells Marilyn “You get an answer, I get an answer”, I’m sure we were all thinking the same thing.

It doesn’t take her long to figure out the right buttons to push with Marilyn, because in many ways, Clarice and Marilyn have a lot in common—they are both women who are lower rungs on a male-dominated ladder, and Starling tells Marilyn that the men running the show will throw Marilyn to the wolves without blinking. “They always dump the girls,” she says, and you get the idea that Marilyn believes that Starling knows what she’s talking about here.

And Starling practically taunts Marilyn with this, sitting up in the bed in a hospital gown, her legs dead, while the female bad guy circles, and in that moment, Starling is still the one with the power. I hate to mention Dr Lecter, but I couldn’t help but think that in that moment, he would have been proud of her (and look, it’s not like the thing with him wasn’t a valuable experience that she learned a lot from—aside from the whole cannibal thing, he was a damn good shrink).

The ventilator tube happens because Marilyn impulsively shoots Starling up with a little too much tranquiliser, then realizes she needs Starling alive until she finds out if Starling knows anything that can incriminate her (she doesn’t). But hey, that’s an excuse for more hallucinations—including flashbacks to Clarice as a child. We get to see the lambs, the barn, and her horse Hannah, who was only ever mentioned in the books. And there are conversations with long-dead dear old dad, complete with a great big bullet hole in the back of his head.

Meanwhile, Ardelia has joined forces with the rest of the VICAP team because Starling never came home and hasn’t called or responded to pages, and Ardelia knows that isn’t like her. Plus, Starling’s usually unflappable friendship with Ardelia is a little flapped right now—in the previous episode, Starling crossed some lines between the personal and the professional that Ardelia didn’t appreciate.

In the book Hannibal, set a few years later, they have been roommates for a long time and are clearly experts at navigating the places where their personal and professional lives meet, but at this point, they’re not that good at it yet. It’s something I look forward to the show getting to explore, for the sake of both characters—especially Ardelia, who is not just a woman working in a man’s world, but a Black woman working in a white man’s world. Nevertheless, the love is there, and there is no way Ardelia isn’t going to turn over every stone. 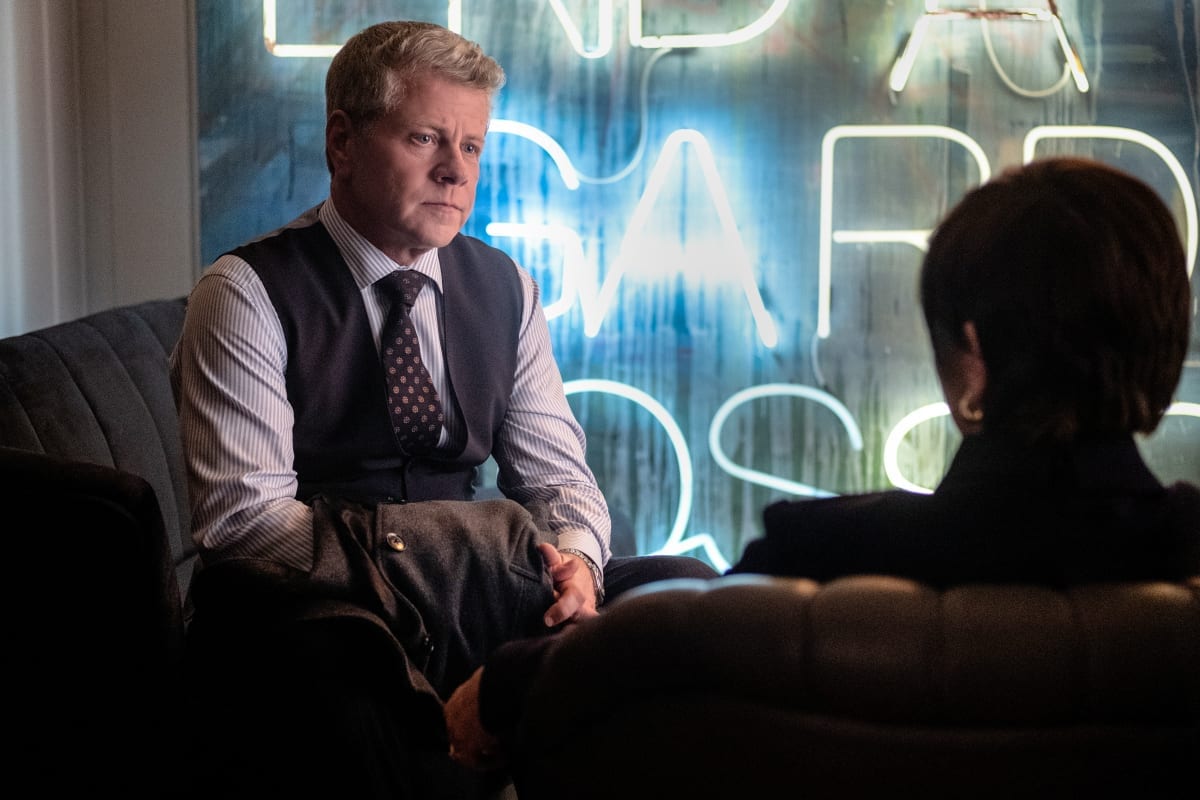 I’ve rapidly fallen in love with every member of the VICAP team, especially Murray Clarke (Nick Sandow), who is crusty and grumbly and gets all the best lines (and some great exchanges with Esquivel, who can hold his own, snark-wise). The team is on their own for a minute because team leader Krendler is busy with his own subplot for a bit.

I love Paul Krendler the Actual Human Being—and not just that he’s not entirely a jerk to Starling, that they’re bothering to make him a whole person outside of the workplace. We get introduced to his MILF ex-wife (those boots!), and we learn that they are both fighting drinking problems. They’re obviously still crazy about each other, and even though they say getting clean isn’t a competition (when clearly it is), he lost my sympathy again when he suggested suing for full custody of their kids. We don’t know enough about her yet, but she’s at least functional enough to have joint custody, and he’s got a job where he gets shot at on the regular, and he wants to take her kids? Nuh-uh.

Back in the rest home, the team has come and gone without discovering Clarice, who has been doped, tubed, and disguised as a patient. One more round of hallucinations gets her talking to her father about why she burned all the letters she wrote to him once he died, and the really disturbing metal execution hood they put on the horses, which was ultimately Hannah’s fate. Dream-dad’s last bit of advice is “Sometimes that scary thing is the only way to survive.”

With Krendler paged and back on the job, they are able to track Starling’s car and get a much bigger team to go get her out of the rest home. Meanwhile, Marilyn is all set to dump Starling in the incinerator, but Starling comes to and injects Marilyn’s sister LuAnn with a lethal dose of something or other. Dream-dad’s advice worked, and the scary thing helped her to survive, because Marilyn immediately abandons Clarice in favour of trying to save her sister’s life.

Before the rest of the cavalry rocks up, we get a glimpse of the bigger bad (yes, it’s a man, and I’m enough of an X-Files fan that I really wanted him to be smoking a cigarette) along with Starling, but not his face, and it feels like yes, Starling was right in that he would have been ready to dump Marilyn with the rest of the girls. Marilyn, once she sees her sister’s flatline beginning to bleep again, chooses to euthanize herself with the two needles she has handy, as opposed to being taken alive. The episode ends with an understandably shaken Clarice resting her head on Ardelia’s shoulder, and trying to apologise about the tension from the previous episode. Ardelia says not now. There’s time, she says.

Episode 6, “How Does It Feel To Be So Beautiful”, airs on April 1st, and I’m counting the minutes.