The following contains spoilers for the first two episodes of Invincible, S1E3, and the Invincible comic book.

Invincible S1E3 “Who You Calling Ugly?” begins differently than the previous two episodes: we aren’t treated to a framing sequence with Jon Hamm’s Steve outside of the home of another head of state. Instead, the episode begins with a memorial for the Guardians of the Globe. During the memorial, Omni-man gives a eulogy that is televised across the globe (pun intended). The ending of his speech is clearly meant to be inspirational and uplifting (including Omni-man literally uplifting himself by flying away at its conclusion); however, since the audience knows that Omni-man is the person who murdered the Guardians, it comes across as more foreboding and self-serving: “[W]e are left to wonder, who will save us now? I will! And so will others like me. New heroes, answering the call. New champions ready to risk everything to keep this planet safe, all inspired by these great souls who came before us. You will have moments of doubt, of fear, of uncertainty. But in those moments, have faith, and look to the sky.” I could be wrong, but essentially telling an audience attending a memorial that “I’m going to take their place” does not seem like the most tactful decision.

Throughout the conclusion of the speech, the camera goes back and forth between Nolan and Mark, as if he is speaking directly to him. In this way, the speech is another part of the complicated relationship between Mark and his father: Mark looks up to his father and models himself as a superhero on him, not knowing that his father murdered the Guardians. I think that the speech would have likely rubbed me the wrong way even if Nolan hadn’t killed the Guardians; while he does include his son and other “new champions” in the speech, it has a very “I alone can fix it” vibe to it.

That said, Nolan gives a second speech at a later, more private ceremony that comes across as much more sincere and solemn. The conflict between the Omni-man who plays to the crowd and decides that he knows what is best for the world and the family man Nolan speaking from the heart as he looks at his own family is at the core of his character, and these problems plague both the heroes and villains in the Invincible comic. 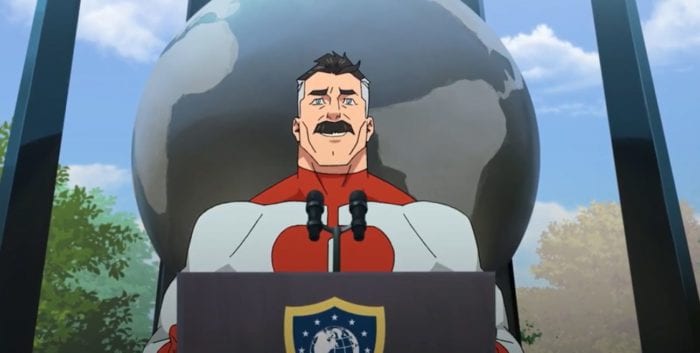 S1E3 examination of the superhero/secret identity duality is largely done through the romantic relationships of several of the main characters. This episode marks both the formal beginnings of Mark’s relationship with Amber and the end of Eve’s relationship to Rex Splode. I haven’t talked about Amber too much in the previous installments of these reviews since she has been a bit more peripheral to the plot up to this point. In S1E2, she asked Mark’s friend William if he was dating Eve, and later she forced Todd to apologize for fighting Mark and used him as a courier to give Mark her phone number. In S1E3, Mark finally calls Amber.

Amber comes over for a study date, which is promptly interrupted by Cecil when Amber goes to the bathroom. A mad scientist named Doc Seismic is attacking Mount Rushmore, and Mark and Eve are the best available options to take him down. Coincidentally, I largely agree with Doc Seismic’s reasoning for attacking the monument, although ideally his solution wouldn’t be to give us “a new god worthy of worship”—himself—nor would it be to tell tourists that he’s going to “emancipate you from your lives” with the Lincoln carving. Eve eventually short circuits Doc Seismic’s earthquake bracelets, causing them to malfunction and him to fall to his apparent death.

Just as the funeral scenes revealed a lot about the duality of Nolan/Omni-man’s life, the Doc Seismic fight and the date with Amber tell us a lot about Mark and how he’s adjusting to the dual life of a superhero. Nolan tells Mark that it’s good that Mark chose his responsibilities as a Viltrumite over Amber, saying “That’s the tricky part of the job, balancing what you want to do with what you need to do.” While Mark has a hard time balancing his superhero life with his “normal” life, he still makes an effort to have both. 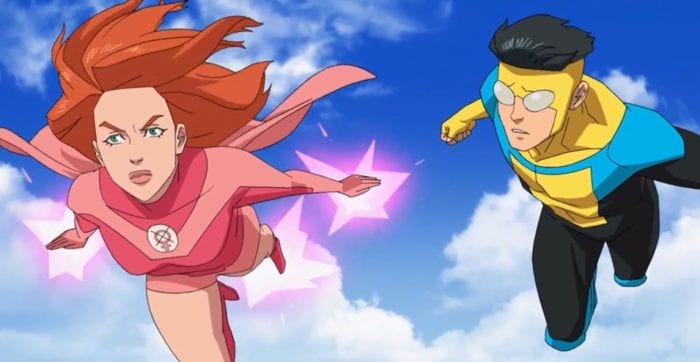 Meanwhile, just as Mark’s love life is looking up, Eve’s falls apart when she walks in on Rex with multiple Dupli-Kates. Rex lied to Kate, telling her that Eve was dating Invincible, although Rex contends that he told Kate the truth. The fight scene with Doc Seismic is supposed to highlight Eve and Mark’s chemistry as a superhero team, but Mark awkwardly leaves almost immediately after the fight to go back to Amber. After she rejects Rex’s attempt at an apology to her later in the episode, Eve flies to Mark’s house, only to see him and Amber making out through the window.

At this point, the audience has only barely seen the non-superhero side of Eve. Her now ex-boyfriend is a superhero, we haven’t seen where she lives or met her parents, and have only seen her a handful of times in school to even know that she has a life outside of Atom Eve. Her approach to being a superhero greatly differs from Mark’s: her superhero name incorporates her real name, while Mark’s does not, she doesn’t wear a mask while Mark does, and she was dating another superhero while Mark is now dating a civilian. While she claims that she doesn’t need a mask because people don’t realize she’s Atom Eve since they don’t live their lives expecting to see a superhero, Mark literally realized she was a superhero because she didn’t wear a mask. As we’ve seen, Mark tries much harder to balance his superhero and normal personae, and his choice to separate his private life from his hero life with a mask, secret identity, and civilian girlfriend are all a part of establishing that outside life. At first, when Eve sees Mark with Amber, she is very disappointed, but after the surprise wears off she smiles to herself and says “Good for you Mark.” I think that she isn’t just happy that he has found some happiness in his life, she’s happy that he was able to find happiness in his normal life.

While it isn’t a romantic relationship (yet), we also see similar themes emerge in the interactions between Robot and the newly introduced Monster Girl. Having been given control of a new Guardians of the Globe, Robot decides to hold tryouts, eventually landing on Black Samson, Shrinking Ray, Dupli-Kate, Monster Girl, Rex, and Eve for the new lineup. Eve turns down the offer because of her hard feelings towards Rex and Kate. 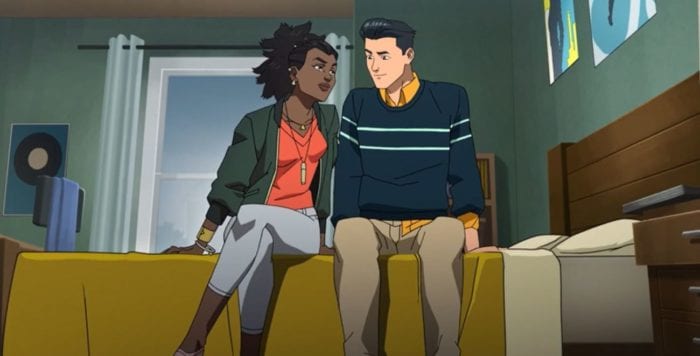 The New Guardians team is…not great, and there are disagreements from the get go. Most prominently, Monster Girl, an Incredible Hulk-like hero who looks like a 12-year-old girl but turns into a giant green ogre, beats the sh*t out of Rex after he makes fun of her. After the heroes part ways, Monster Girl approaches Robot to tell him that she won’t be able to follow his training plan because the curse that gives her powers also causes her to age backwards when she uses them. Robot tells her that he “understand[s] what it’s like, for the world to look at you and see one thing, never knowing the truth of what’s inside,” which Monster Girl blows off because he’s a robot. Both Monster Girl and Robot’s identities are virtually entirely subsumed by their superhero identities: Monster Girl’s life has been ruined by her curse, and she’s roughly twice the age she appears to be, while Robot is well…a robot.

The pre-credits portion of the episode ends with Robot covertly helping the Mauler Twins escape from jail. It isn’t clear why he does so in this episode, but longtime comics readers know why (so read the comics, they’re so good!). Let’s just say that it has to do with why he understands how Monster Girl feels.

Looming in the background of the rest of the plot is demon detective Damian Darkblood’s investigation of the Guardians’ murders, for which he is getting more and more suspicious of Omni-man, as is the government’s surveillance. Damien even goes as far to show up after the private funeral. The episode’s mid-credits scene supports something that I had noticed in previous episodes: Debbie also doesn’t seem to completely trust Nolan’s story about the night the Guardians were murdered. Damien Darkblood appears in the Graysons’ house while Debbie is downstairs alone in the kitchen late at night. While Debbie doesn’t tell Damien anything, she also doesn’t tell Nolan that he was there. However, Nolan is still able to tell that Damien was there after Debbie leaves the room because he can see his breath, which is a tell-tale sign that Damien is or recently was somewhere. Any sort of distrust on Debbie’s part is new to the show—she has no reason to distrust Nolan in the comics because he so thoroughly dispatched the Guardians that no one ever knew he was even there. 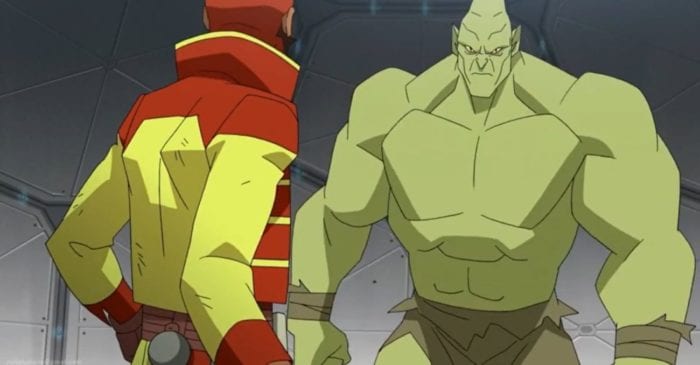 There is also a small but significant scene for Cecil’s character development towards the end of the episode that indicates his suspicion of Omni-man. Donald is on the shore where Omni-man had just finished fighting a kaiju. He reports back to Cecil, saying that the kaiju is “big sir, really big. First time I’ve seen Omni-man on the ropes like that. Also, it might not be dead.” Cecil responds that “Put it on ice. You never know when something like that might come in handy.” In the comics, Cecil is often willing to take risks by working with sometimes unsavory individuals in the name of keeping the planet safe. He has already shown hints of this tendency by allowing Damien Darkblood to continue his investigation, but he takes another big step forward by keeping the kaiju around.

The show enters the final episode of the first half of its first season next week firmly in the first season’s second act with a number of open plotlines, including Mark’s new relationship with Amber, the new Guardians of the Globe, Robot’s mysterious assistance to the Mauler Twins, and of course, Omni-man’s betrayal of the original Guardians. Most of these plotlines will almost certainly have a long impact on the show. After a successful debut weekend for the show, it will be interesting to see how the show treats these plotlines next week.