Considering the fact that Monster Hunter World was Capcom’s highest selling video game ever, I think it’s safe to say that the once obscure franchise has become a legitimate phenomenon. It’s not difficult to see why, either. The series’ emphasis on combat, the outstanding creature design, and its whimsical sense of fun and humor make it approachable despite its hidden complexity. With the currently Switch-exclusive Monster Hunter Rise, Capcom has decided to streamline some of the previous games’ more obtuse elements. It’s always tricky to change features of long running franchises, but at about seven hours of game time, I think Capcom has gone about it the right way, and the result is a game that’s about as user friendly and newbie friendly as is possible.

Technically speaking, my first Monster Hunter game was Tri back on the original Wii, and as a younger person, I found the tutorials and poorly explained systems rather overwhelming. It wasn’t until the fourth entry on the 3DS that I really picked it up and focused on it, and from there, I’ve played Generations, World, and now Rise. I haven’t sunk as many hours as some people have, but I have close to 200 in 4U, 80 in Generations, and about 160 in World. Point being that I’ve spent quite a bit of time with the series and consider myself a fan. 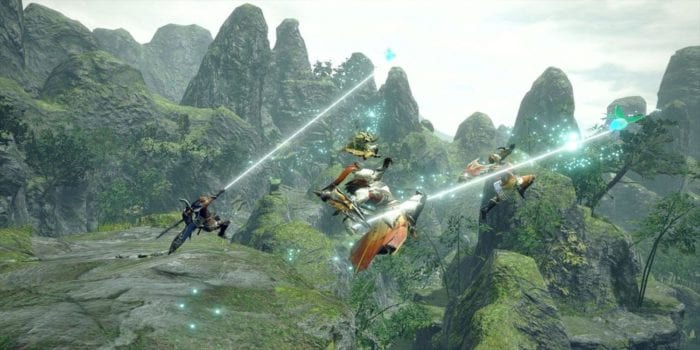 Unlike some of these previous entries, Rise wastes no time in letting the players get to the main attraction of fighting giant monsters. After talking with some of the residents of Kamura village and getting acquainted with the general layout of the town, I was able to hop into a lobby with some of my friends and start fighting one of the game’s new monsters, the Aknosom. There are plenty of tutorials for people new to the franchise, though, and they’re all readily accessible in the menu. It’s nice that Capcom let me get right to the action without forcing me to banal tutorial quests.

That being said, Rise still adds a few new features to the core combat. The most immediate addition is the Wirebug, which is like the grappling hook from World with a few new bells and whistles. In addition to letting players launch themselves from different grapple points scattered around the map, the Wirebug lets players use Silkbind attacks which vary depending on the weapon class they use. For instance, when I used the Gunlance, one Silkbind move coated my shield in silk, letting me block attacks without using any stamina for a short time. The other one launched me in the air and let me unload my weapon before slamming me back down to the ground to deal massive damage to the monster.

From what I’ve seen so far, the Wirebug is fairly well balanced, with it acting as a complement to your arsenal. It adds extra wrinkles to the already-distinct weapons, and you need to use the moves at the right time for maximum effectiveness. It adds a lot of variety to combat, though, and makes me want to try out more weapon types that I might not have given a chance to in the past (for the record, I alternate between Switch Axe, Gunlance, Heavy Bowgun, and Insect Glaive, and I also dabble in the Hammer every once in a while). It helps keep the pace of fights up thanks to most weapons having a mobility move attached to their Wirebug, and apparently you can eventually unlock even more moves later on in the game.

And it’s this element I’m looking forward to most. Almost any series veteran will tell you that fine tuning your character is a big part of the fun of the series. From choosing which armor they wear, what weapon they wield, and what skills they have, there’s no end to the different builds you can try out, and smartly, everything is tied to your items instead of an experience bar. This means you can switch weapon classes and, as long as you’ve made a weapon appropriate for the part of the game you’re at, you can do so without any kind of penalty. Granted, I’m still early in the game, so I don’t have a ton of options available to me just yet.

Hunting monsters using oversized weapons is the main draw of the title, and like other games, it’s double the fun to hunt with friends. I have a pretty standard internet connection, and after several hours of play I’ve experienced pretty much no slowdown, and joining up with a friend’s lobby takesmere seconds. While Rise isn’t as graphically impressive as World was, I will take these slightly lesser (but still attractive) graphics if it means I can start hunting sooner.

Perhaps my favorite new addition is the Palamute, the canine equivalent of the series’ long-running feline ally the Palico. You can customize your doggy friend (I made mine into a fantasy-based version of my real-life dog) and equip them with some pretty neat looking armor as well. Whereas Palicos are more about supporting you in different ways depending on their class, the Palamutes are more about giving you mobility options. You can ride Palamutes indefinitely, and they can zoom around the map at a pretty good clip. Some might be annoyed and see it as a dumbing down of series conventions, but I’m loving my canine companion so far. Like the Wirebug, it helps keep the pace of fights up, especially when the monster decides to run to another area.

There are quite a few other touches that might seem contentious, with the main ones being the removal of Hot and Cold drinks. In previous entries, certain environments might be too hot or cold for your hunter, and you’d have to use one of these drink types to offset their negative effects. Honestly, it always felt like one extra step to me, and I don’t miss having to remember to use them. I’ve seen a little bit of discourse online about how this nerfs the difficulty and is a sign of Rise straying from the unique features of the franchise, but I would like to pose a question. Is it really a challenge if it simply requires you to press a button every ten minutes or so? Personally, I don’t think it is, and I appreciate Capcom trimming the fat from previous entries.

Since I’m still early in the game, I don’t know how these changes and additions will affect the later parts where the difficulty will presumably ramp up. All I can say is that I’m enjoying my time with Rise. Despite the aforementioned changes and additions, it is still Monster Hunter through and through. The new designs are impressive, and seeing familiar creatures is always welcome, too. It still offers unique, challenging combat like few other series do, and taking down impossibly huge, awesomely designed monsters with friends is an absolute blast. I’m looking forward to seeing where the game will take me and what kind of dangers it will pit me against.