I don’t know about you, but a good, classic “Hollywood meet cute” gets me every time. Film history is full of them. For those unfamiliar with the term, it’s a scene where “two people who will form a future romantic couple meet for the first time, typically under unusual, humorous, or cute circumstances” and enhanced often by “a humorous clash of personality or of beliefs, embarrassing situations, or comical misunderstandings that further drive the plot.” The squeaky clean 1996 romantic comedy One Fine Day has one that really starts more as a “meet hate.”

Let me set this topsy-turvy table. Two divorced single parents are running behind on a damp spring morning in Manhattan. Thanks to forgetfulness and bungled miscommunication, their mutual children are late enough to miss their class field trip on a Circle Line cruise boat. Both parents are now stuck managing their own child care on a busy work day.

When the four of them squeeze together to share a cab, the adults throw pot-shot blame directed at each other through cell phone conversations. The man insinuates that he’s talking to a woman about her panties. The woman counters calls out the wrongness of how a “minor amount of charm” cannot replace “integrity and commitment.” The kids hammer home the “meet hate” disguised as a “meet cute” with the traded lines of “My dad hates your mom,” and “My mom hates your dad.”

With the classic Hollywood “meet cute” in mind, we know this loathing will flip into loving in due time, but that’s the patient course of amusement to root for in One Fine Day. Directed by Michael Hoffman and pairing Michelle Pfeiffer with George Clooney, this easy-going and old-fashioned flick is a dreamy little detour of detours. Trade out its 1990s cell phones, wash it in black-and-white, and you’d have a screwball comedy fit for the old Hollywood golden era.

Pfeiffer plays architect Melanie Parker preparing for an important model presentation today for her hard-to-please boss and lucrative clients. Clooney is New York Daily News columnist Jack Taylor staring down a deadline and a mayoral press conference when his sources bolt and put him up for a job-killing retraction. She is managing her poor-listening and accident-prone son Sammy (Alex D. Linz, in his film debut), and he is saddled entertaining his part-time custody daughter Maggie (the go-to cute daughter of the 1990s Mae Whitman) and her wandering habits.

With both modern efficiency and desperate doubts, Melanie and Jack trade cell phone numbers, schedules, and supervision assignments to cover Sammy, Maggie, and a fishbowl of the class fish to get through the demanding day that culminates in an evening soccer game in Central Park. Continuing the timestamps that run through the film, the minutes and hours click through the microcosms of coincidences, triumphs, pratfalls, and flirtations that lift and beset the lives and careers of these two devoted parents during this kinetic adventure. 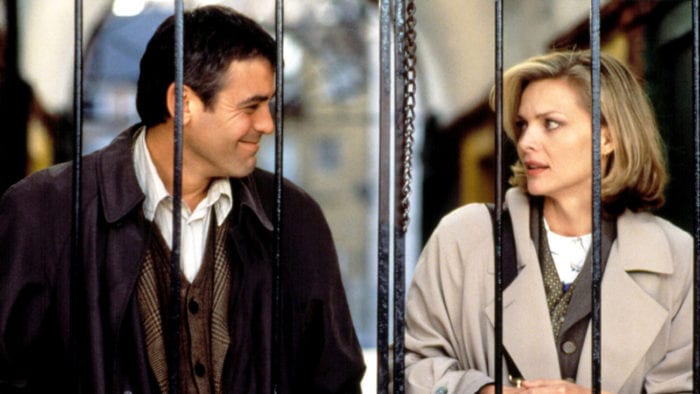 One Fine Day was one of three Michelle Pfeiffer films of 1996 and the lightest one away from Up & Close and Personal playing May-December with Robert Redford and the vastly underseen To Gillian on Her 37th Birthday. She is the dominant personality in this film. Watch the way characters react to Melanie’s urges to be treated independently. Some champion it, but most turn their nose to her not accepting help. In the end, her mistakes come when she lets her control freak frazzle get the best of her. There is respectable honesty to what was too often deemed off-putting.

Across from Pfeiffer is George Clooney, three years younger than her and stepping into the film breakout that he would never turn back from after slaying television audiences on E.R. One Fine Day was the romantic tonic that washed down the vampire romp From Dusk Till Dawn earlier that year. Watch the way just about every female character glows around his charisma. He’s a hilarious gem with child actors too, and everybody is planted to love his Jack other than the challenging Melanie. Like her, his character mistakes come when his laissez faire attitude gets the best of him. Jack has to quell that Peter Pan complex with wisdom and responsibility more than sarcasm. 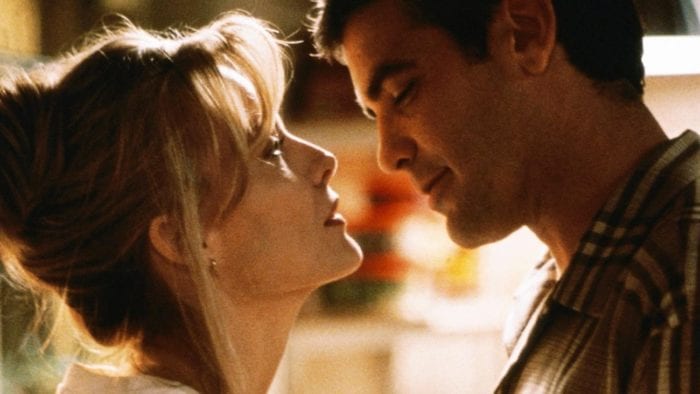 Thanks to endearing actors, the momentum of the “meet hate” turning into a “meet cute” never stops in One Fine Day. When their characters collide to trade their matched mic drop replies of “Guess what, I’m not like every other man/woman you know,” their flickering chemistry is enchanting and grows with the movie. Little character actors like Charles Durning as Jack’s brusque editor and boss, the peachy Holland Taylor playing Melanie’s mother, and a fetching Amanda Peet playing a pursuing workplace love interest fill small functional roles to orbit these two workaholic comets and nudge them alone.

One Fine Day deserved to be a bigger audience winner for director Michael Hoffman (Soapdish before, The Last Station after) and the writing duo of Terrel Seltzer (The Rendezvous) and Ellen Simon (Moonlight and Valentino). In the heart of the raunchy late 1990s, they scripted and shot a relatable, chaste, and PG-clean romantic comedy without cheese, syrup, or a lamely forced villain. Again, this could have easily been a vehicle for the Jimmy Stewart and Katharine Hepburn types sixty years ago. All of the “One Fine Day” song renditions, from the do-wop classic by the The Chiffons to the opening aperitif from Natalie Merchant back James Newton Howard’s soft score to keep the gravity light.

Sure, the will-they/won’t-they mystery might be a foregone conclusion. When is it not, honestly, within this genre? Nevertheless, the career vs. family struggles and the included encouragements on reliability and responsible decision-making pad the zingers with heart.

In the end, both Jack Taylor and Melanie Parker represent successful, hurried, and loving parents in a peppy and optimistic movie. Kids can screw everything up, but they’re so damn cute doing it and are quick to be sorry and instantly re-attached to their loving parents. When I first saw One Fine Day as a late teen, I wanted to grow up to be as cool of a dad as George Clooney and meet a luminous go-getter like Michelle Pfeiffer. 25 years later, from one married parent to another now, I have enjoyed chasing that dream and can happily acknowledge that there’s a great deal to love in cheering for the romantic and career successes at play in One Fine Day.