‘Godzilla: King of the Monsters Lumbers Back to Camp Roots’ is now available on Audio, read by author Don Shanahan, exclusively for our Patreon supporters. For just $3 a month you will have access to our full library of Audio content, plus three new uploads every week. To sign up visit our Patreon page: https://www.patreon.com/25YL

Midway into this sequel, a sweaty and flustered Kyle Chandler, far from the “clear eyes, full hearts” of Friday Night Lights, uses his character’s expertise to remark on a penetrating sound coming from one of the tentpole’s mega monsters. He indicates the audible shriek declares a want for one of three things that start with F: food, a fight, or, as he censors, “something more intimate.” Fill in the blank as you will. You’re going to let out a few groans of your own too during Godzilla: King of the Monsters, and they won’t be matching of those three particular F words. Instead, they will be flummox, frenzy, and frustration.

After Gareth Edwards rebooted the legendary Japanese sea monster for a modern audience with a stern seriousness and hefty scope that destroyed all previous campiness connected to the character, this Michael Dougherty-helmed follow-up burns up all of that renewed credibility right away within the first half-hour on through to the exhausting end. Where’s the blame? That would be the humans, because the behemoths really come out to play. Bad quip-heavy comedy, nonsensical plot trappings, and unimportant character inclusions are the true weaknesses that defeat these monsters.

Chandler’s central hero is Dr. Mark Russell, a former Monarch specialist who has not handled the familial loss that came to him during the San Francisco destruction of the 2014 film. His now-divorced wife, Dr. Emma Russell (Vera Farmiga), and daughter Madison (Stranger Things starlet Millie Bobby Brown) have remained with the clandestine scientific organization studying the other “titans” that have been discovered since the shocking public disaster five years ago.

Emma has continued the work of her spouse to develop the Orca, the key MacGuffin of the movie that can tuned to emulate the bio-sonar signals of these beasts. Much like those F-word signals mentioned earlier, the exactitude of the Orca is paramount to human chances of success. It’s about watching that digital dial and getting the frequencies straight. You don’t want to mix up your battle cries with your mating calls and, yes, it’s as silly as it sounds.

The intelligence of Godzilla: King of the Monsters‘ fictional science ends there when Emma sides with eco-terrorist Alan Jonah (played by professional movie villain Charles Dance) a former military colonel who’s out for the big business of kaiju DNA. All the Monarch good guy spooks and scientists can do, led by the returning experts Serizawa and Graham (Ken Watanabe and Sally Hawkins) and flanked by newcomers Bradley Whitford, Thomas Middleditch and Zhang Ziyi, is recruit Mark with a classic “there’s no one better than you” arm-twist, to chase his wife around the globe as Jonah’s team breaks into Monarch outposts and releases new gestating and dormant nightmares. Reading all those human details, whatever happened to the “let them fight” urgency. 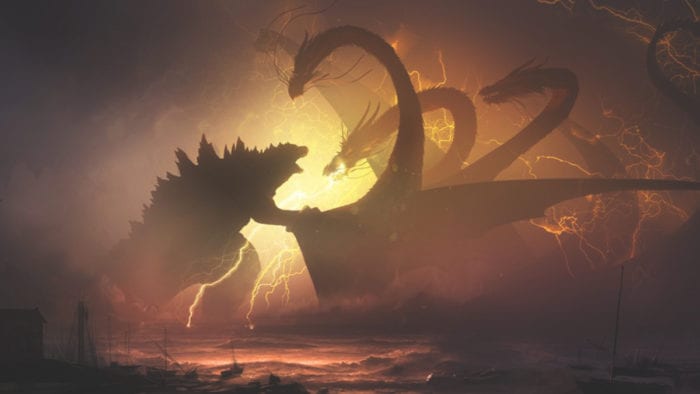 Each time, the human narrative seems to run its course and the action can commence between Godzilla, the multi-headed Ghidorah, the fiery-winged Rodan, and the luminous Mothra, the people and their flimsy motives of environmental cleansing, radiation, gambling, balance, and what not keep getting in the way. The entire big-bomb-centered military element with David Strathairn (returning from the 2014 first chapter), O’Shea Jackson, Aisha Hinds, and Anthony Ramos are as random and underwritten as the scientists. When a blunt “you’re a monster” is the sad peak of the burn level of human care and intensity, it’s time to aim higher. Stop cutting to the humans and forcing characters no one cares about. We came for the monsters.

While we’re on this topic of gobsmacked and out-of-place people in Godzilla: King of the Monsters, cinematographer Lawrence Sher’s unpinned camera catches more gawking than an audience at an opera concert in a movie that should churn like a meat grinder. Take a cue from the original classic targets and run! If a movie was going to include and put this much attention on the people, they should have them doing something more interesting than all this inaction. 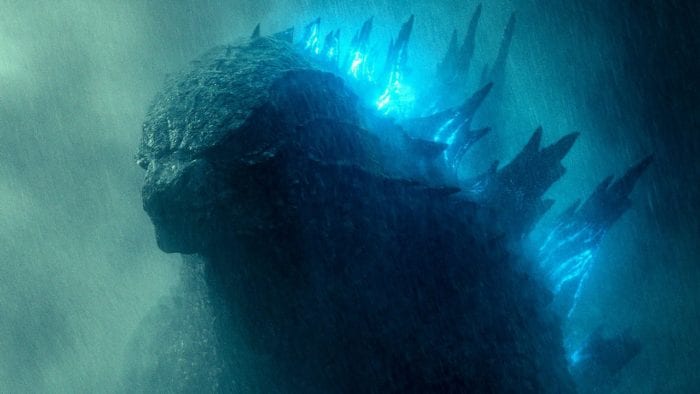 While the portly and performance-captured Godzilla (stuntman extraordinaire T.J. Storm) and his opponents of immense and insane cinematic scale lack feral grace and lumber little better than when they used to be portrayed by actors in rubber suits, the throwdowns of Godzilla: King of the Monsters (when they’re not being interrupted by the substandard human characters) are toy-smashing wish fulfillment for raucous fans. The promise of a larger world of threats from the MonsterVerse of Godzilla and Kong: Skull Island is sizably answered. Composer Bear McCreary’s score resurrects the original theme cues and is a major improvement to orchestrate this reptilian rumba stomping on cities. There is awesomeness to be found, if you can see or hear it clearly.

The final bit of trouble with Godzilla: King of the Monsters is its scrambled layers of noise. Godzilla’s trademark roar, as imposing and cool as it is when loosed, barely stands out in a messy sound mix of indeterminable clutter elsewhere. With enough precipitation haze and colored cumulonimbus clouds to make even The Weather Channel give up and wish for a clearer day of textures, the fight scenes are often shrouded, dark, and very difficult to follow. Even with the heavyweight sights present, the dimming effect of 3D on this dingy palette cannot be recommended. The three-man editing team sliced the exciting slug-fest we wanted with the bumbling calamities and preposterous survival saves of the people we don’t care about. This movie will have its loyal audience, one that may continue with Godzilla vs. Kong, but it is a creative step back for the MonsterVerse. 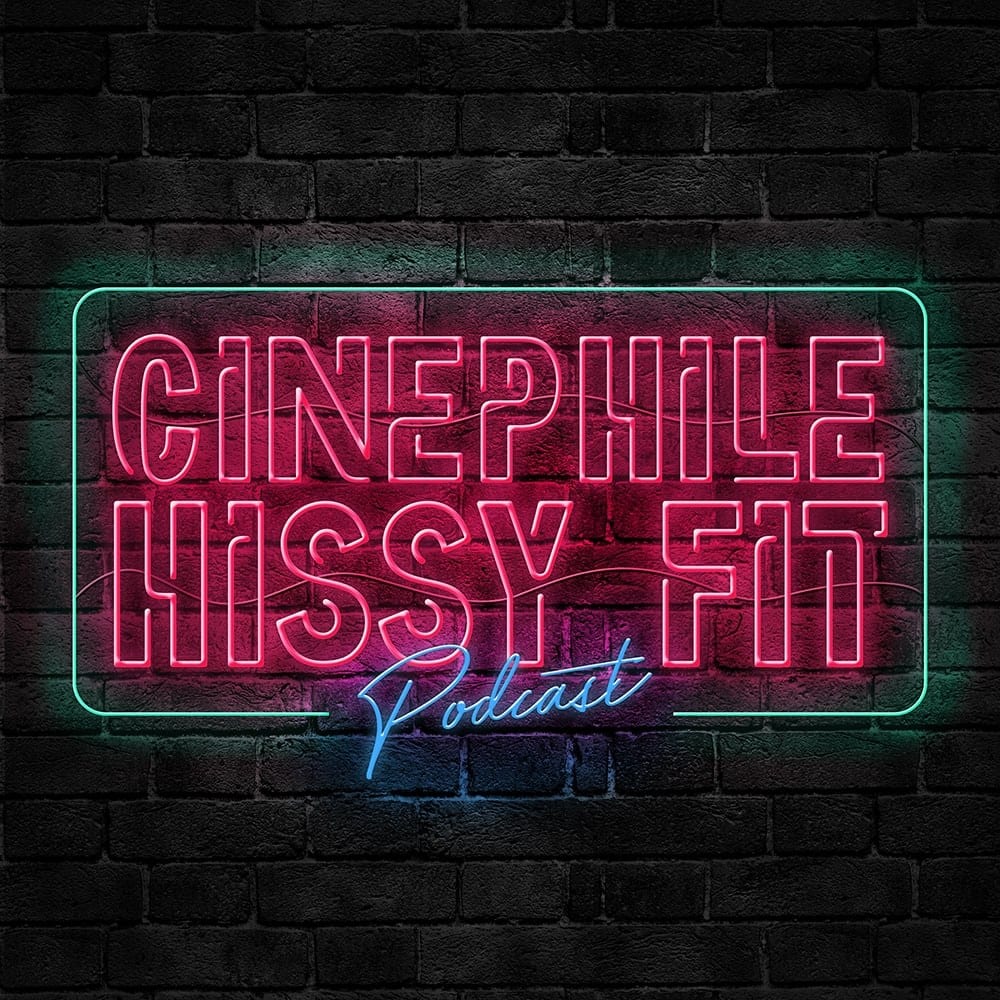