‘Spike Lee’s Chi-Raq Proves Satire Has Its Topical Bite’ is now available on Audio, read by author Don Shanahan, exclusively for our Patreon supporters. For just $3 a month you will have access to our full library of Audio content, plus three new uploads every week. To sign up visit our Patreon page: https://www.patreon.com/25YL

To be a more astute and informed moviegoer when it comes to satires, one really should do the background homework to understand what is being satirized in a given film. Without doing that, you either miss the point of the mockery, miss the underlying message, or both. Upon the reveal of the controversial title of Spike Lee’s Chi-Raq in 2014 and the finished film the next year, many people missed the point. True, satires can backfire as well, by overdoing the parody or forgetting their basis of reality. Powered by vivid intelligence and bracing honesty, Chi-Raq does not fail. It may be “bat-sh*t crazy,” as The Daily Show host Trevor Noah says, but it does not fail. It’s time to get educated on this burgeoning cult classic.

Chi-Raq transposes Lysistrata, a Greek comedy from 411 B.C. by the playwright Aristophanes, to the modern-day using the urban violence of Chicago, Illinois as its backdrop. Its title was based on an unwanted street nickname coined by its own residents. It was not an offensive knock created by loyal New Yorker Spike Lee from across the country. If anything Chi-Raq is a love letter of empathy that the problems of one city are seen and understood by a creator who wants to see change.

As the opening prologue of the film testifies, the troubling numbers don’t lie. Gun deaths in Chicago approximately double the rate of American troops killed in Afghanistan since 2001 during the same time period. Violence like that changes a community and Nick Cannon’s rapper/gang leader title character Chi-Raq offers the first voice to express that with hard-hitting “Pray 4 My City” in that same prologue. 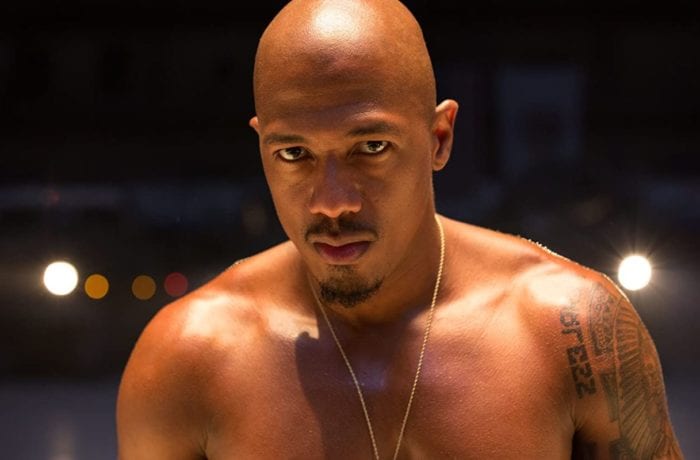 The lyrics of Chi-Raq’s central anthem begin with the “everyday” sights and sounds of his landscape from sirens to mournful cries. Rather than plead for empathy to heal, his words and his heart punch back with complaints about the competitiveness of money and survival against violent tests in a city he calls “lost.” We will learn this is a classic case of actions not backing words, and this rap is just the start of the volumes of truth Spike Lee and his ensemble are trying to establish.

After the initial song, we are introduced to our omnipotent and boisterous narrator Dolemedes, played with all possible gusto and volume by Samuel L. Jackson. He provides the loose background of Lysistrata, which told the tale of the women from two warring factions, Athens and Sparta, agreeing to ban access to sexual entitlements as a means of forcing the men to seek peace. This non-violent tactic inspired actual events outside of fictitious Greek theater during the Second Liberian Civil War in 2003. Dolemedes lays the scene and shows events put in motion by this setting’s Lysistrata, played by Teyonah Parris (WandaVision, Dear White People).

Lysistrata is the fine dedicated woman to Chi-Raq, leader of the purple-clad Spartan gang. Their rival gang is the orange Trojans, led by the cackling Cyclops (Wesley Snipes). When a drive-by shooting goes awry and an innocent 11-year-old girl is killed, the community sours towards their present reality.

The girl’s mother, Irene (Jennifer Hudson), demands answers and someone to come forward to admit the crime. She gains the help of the local Catholic church in the Auburn-Gresham neighborhood, led by Father Mike Corridon, played by Chicago’s own John Cusack and modeled after the real-life Father Michael Pfleger of Saint Sabina Church.

After receiving mature insight from a local educated elder named Miss Helen (Angela Bassett), Lysistrata learns of what happened in Liberia and rallies the wives, girlfriends, and mistresses of both the Spartans and the Trojans to start a sex strike until their men put down their guns. “No peace, no p*ssy” becomes their rallying call and, before long, an entire city, nation, and world joins the movement. 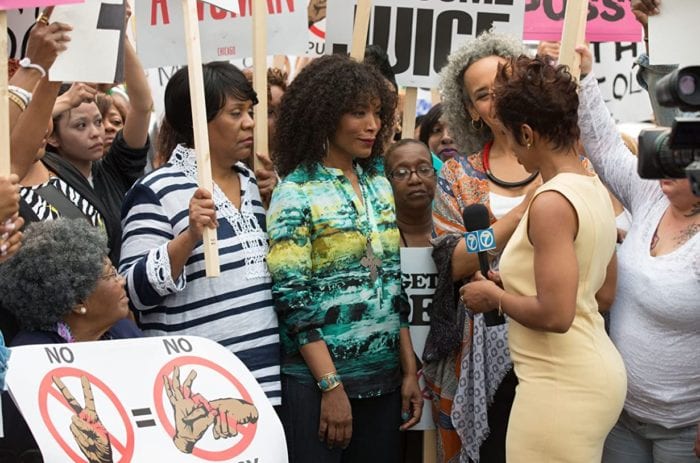 Once the characters of Chi-Raq start talking about sex, the kaleidoscope of verbal color explodes. Hot damn, can Spike Lee write dialogue, including the nearly infinite number of euphemisms possible for “sex.” You will lose count of the number of wild rhymes and lyrical terms given to all things related to genitalia or sex acts. This is two hours of eyebrow-raising turned phrases, and it’s a glorious farce in every layer.

The men around town from the gangs—the older horndog creeps of the Knights of Euphrates (led by Steve Harris’ Ole Duke), the bumbling city mayor (D.B. Sweeney), his bureaucratic right-hand man (Harry Lennix), and even the crazy white supremacists (led by David Patrick Kelly)—begin to buckle under the selfish carnal pressure. The game becomes which side will cave first.

Lee creates these gross stereotypes with over-the-top characterization, from lampooning then-Chicago mayor Rahm Emmanuel with Sweeney and the same vein of future white supremacists the director would target again in BlacKkKlansman. One can argue, save for the priest (and even that has its shade), there’s not a single altruistic male presence in this movie, which pokes deliberate shame and blame at every failure. Seeing all of these piggish male caricatures bend and flounder over the denial of sex is a dynamic platform for satire on the carnal weaknesses found too often within the so-called dominant gender.

Throughout it all, the women come out ahead with every volley of threat and counter because they are the ones presented most in control. There is a tremendous layer of Chi-Raq that bestows complete dominance and empowerment upon women. They are the strong ones who can see through the junk of life and dedicate themselves to a cause while the men are left, forgive the expression, with their dicks in their hands. The women carry the engines of necessary empathy, and that’s a very good thing.

There is a great deal of tough talk on both sides of the streets and gender partitions. Gang members attack with words and threats. By contrast, law-abiding citizens and leaders of all levels speak their minds and pontificate on several platforms. Talk is only the start. As aforementioned with Cannon’s rapper, turning talk into action is the only way anything drastic will happen or change, whether that’s a sex strike, moving homes, snitching the truth, enforcing laws, pulling triggers, shaking hands, or finding peace. Chi-Raq challenges everyone to find action over talk.

Lee’s film, co-written with his future Oscar-winning BlacKkKlansman and Da 5 Bloods partner Kevin Wilmott, is predominantly told in lyrical voice and spoken rhyme to an extremely sharp and nimble artistic effect. So many members of this cast have mic-dropping standout moments. The wildest thing is many of those moments elicit laughts more than agape awe. That’s the satirical spin of Lee’s presentation. Teyonah Parris is a revelation as the vocal and spiritual leader of this story. Her passion, persuasion, and presence are boundless. Chi-Raq rightfully became a launching pad for Parris.

Orbiting around Parris is easily the most dramatic you may ever see long-time TV host Nick Cannon, in an invested, menacing, and conflicted performance. Angela Bassett pushes hellish pride and dignity with every line reading. John Cusack delivers a ranting eulogy and sermon for the ages (on par with Edward Norton’s monologue from Spike Lee’s The 25th Hour). Lastly, Samuel L. Jackson is, to no surprise, ever-cool with endless suave moves to nudge the theatrics along. 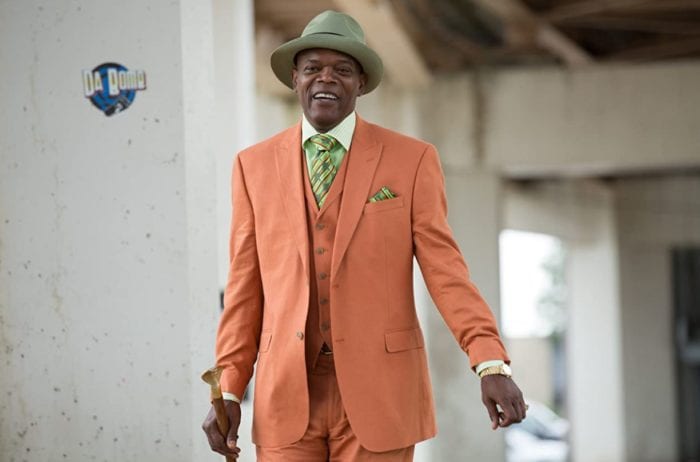 Additionally, how soon we forget Academy Award winner Jennifer Hudson herself lost her mother, brother, and seven-year-old nephew to gun violence in 2008. You just know that personal experience had to fuel her character’s own extremely palpable anguish. It’s that kind of personal dedication that adds tangible drama and real-life connections to what is framed as satire. That cinematic knitting is a calling card for numerous Spike Lee films.

No issue, cause, blame, or topic is safe in Chi-Raq and the finger-pointing covers everyone. Everything is put on the table as roots of the central problem of gun violence, from inadequate gun laws, police discrimination, mass black incarceration, a poor education system, unemployment, the underground economy of drugs, insufficient government resources, gentrification, and racial inequality. Any progress on these real-life issues is going to take an entire community. It will take more than protests and some signatures on pieces of paper. It will take an entire community that chooses to love their city and each other. If it takes a movie like Chi-Raq to rub our proverbial noses in the preposterousness of collective attitudes and mistakes, so be it. It’s the right slant for the movie led by the right voice who lives and succeeds so often on those sharpest of angles.

For that ironic rubbing, look no further than the “climax” challenge of the ending. Truces and deals attempted by stubborn men are to be struck by a race to orgasm. It’s a silly challenge they are sure to lose but too proud to admit until the women assert their strength once again. To see indignant arms laid down, hospitals built, and trauma centers created all over the exploited instinctual craving to “get some” mocks to the wish on whether it could only be that simple in real life.

In Spike Lee’s film, the symbolism is thick and the underlying truths are even thicker. Chi-Raq is fiercely intelligent with its farcical parable and fearless in its vicious social commentary. Both exhibit equal power. That balanced ability was tremendously difficult to pull off with honesty and Lee nailed it and then some. This film ran with the Greek comedy comparison and escalated it to inconceivable satirical heights, making it as timely now as it was in 2015. Not all of it works, but all of it demands your attention. If you watch this film and only see the satire and dismiss the truth, you are missing the point and that’s a shame.