The new Netflix series Shadow and Bone is an interesting compendium of things that I enjoy. It’s a large, world-building fantasy series that isn’t afraid to mess around with classic tropes and characters. It has a great sense of production design and confidence in the artists who work on the show’s ability to make interesting tweaks to all of the settings and costumes. It is also based on a pre-existing series of books aimed at a young adult audience. All of which could have made the show something I would have loved. Through the first two episodes of the eight-episode first season though, I already feel like I’ve seen it all before. And that I’ve seen it done much better.

I usually try to know as much about a property going in as possible, but this time I thought it would be more fun to go in without knowing anything about the series or characters at all. This seems to have been a real mistake. Many of my friends who already know and love the “Grishaverse” books by Leigh Bardugo have already started to post that they love the adaptation. It is probably the case that, particularly since this is a Netflix series, the creators expected the viewers to either already be familiar with Bardugo’s novels or that they would simply binge a few episodes all at once. That model has worked well for Netflix, and may even work for this series, but it has never been to my taste and I think this series suffers from it. 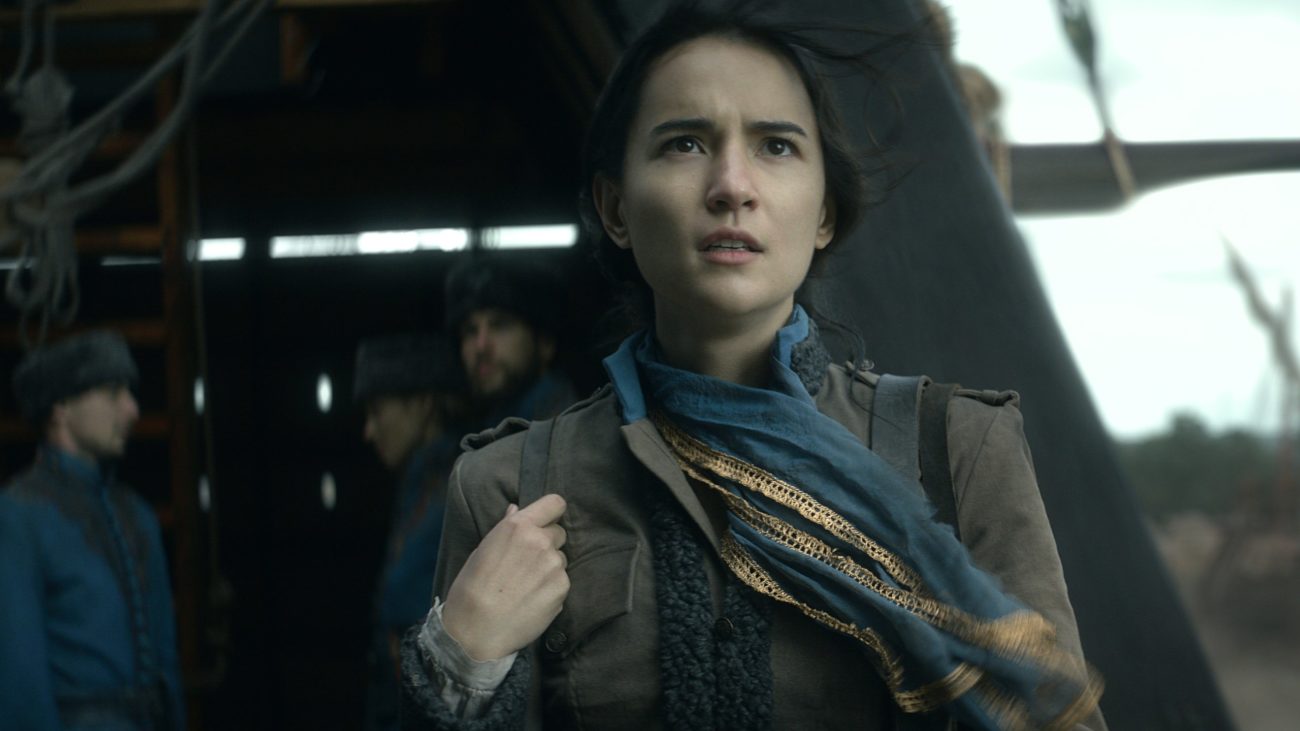 The pilot “A Searing Burst of Light” was certainly the weakest of the two episodes that I’ve watched. Pilot episodes always have a lot of work to do and even the best series sometimes stumble with the exposition and introductions of the character. With “A Searing Burst of Light” it sometimes seems that the script, by showrunner Eric Heisserer, is trying to be a chaotic and cliche as possible. The biggest issue is that there is no focus. Instead of doing a “slow-building” pilot episode that allows the viewer to get a sense of the world by focusing on the characters, the pilot portrays the most possible information in the shortest amount of time possible. This leaves the whole thing feeling disjointed, the characters wooden and uninteresting, and somehow doesn’t do much of interest with the plot.

Thankfully the second episode, “We’re All Someone’s Monster” takes more time to work on building the world slowly and has a much better sense of the characters and their motivations. Shadow and Bone Episode 2 takes us deeper into the political reality of the show’s universe and has less exposition shouted by random soldiers, which is a definitive positive. But it still feels like at least two shows that are being stitched together and forced into a single narrative. This is apparently exactly what Heisserer has done by combining two of Bardugo’s works about different characters that happen to be set in the same world, into one television show.

There is an interesting, albeit pretty rote, narrative set up to Shadow and Bone. The world of the show is divided, both literally by a gigantic scar of darkness known as the “Shadow Fold,” and philosophically. In the world of the series, there are regular people and magic wielders, called Grisha, and the two groups harbor extreme distrust and distaste for each other. The magic of the show has not been explained in depth by the end of “We’re All Someone’s Monster” but it seems clear that it will be explored, which is good. The way that magic works in fantasy worlds is often the clearest way to differentiate the world from others.

So far in the Shadow and Bone television show though there is not a lot of clarity as to what the Grisha can do with their powers, how they work, or what the limitations are. It seems as though the powers work similarly to the bending in Avatar: The Last Airbender, and I must say the effects work well and are a good sign for the live-action series set in that universe. But, unlike in ATLA, the powers are not defined and clarified, and most of the Grisha, at least so far, seem to be pretty weak and non-descript. Obviously, the world will be more fleshed out as we go along. It just doesn’t seem very well detailed after the first two episodes.

The characters are also underserved in the early going. Alina Starkov (Jessie Mei Li) is a cipher so far. The early scenes of “A Searing Burst of Light” do allow her some moments of self-sufficiency, and the way she manipulated her way onto the ill-fated crossing of the “shadow fold” was well executed. Mei Li is a compelling actor and her reactions to other characters show a real sense of the interior life of the character. As the two episodes progressed though Alina is hamstrung by the by-the-numbers plot. Her powers are discovered accidentally as she sacrifices herself to save Mal (Archie Renaux) and from that moment on she is not in control of her own narrative.

Of course, the biggest issue here is that the character of Mal is nearly unbearably bland. It is already clear that one of the major subplots of the series is a love triangle between Alina, Mal, and General Krigan (Ben Barnes). In addition to being one of my personal least favorite tropes, the whole romance subplot is really hurt in this instance by the huge disparity of passion and chemistry between the pairings. Barnes and Mei Li’s scenes together have a crackling intensity that threatens to rise the relationship from its overly familiar tropes. (Have I already called Krigian Wizard Kylo? Of course, I have.) Krigan is apparently known as “The Darkling” in the books, which seems like a spoiler and was probably a good idea to change, but also is pretty obvious when you look at him. Barnes seems pretty perfect in the role either way.

Renaux and Mei Li are fine together but they don’t have the same spark, which just makes their subplot feel unnecessary. Particularly since that plot is peppered with cloying, slow-motion, over-saturated flashbacks to the two of them as children that make an already over-cluttered show feel stifling. It seems like the story is going to come back to this friendship and probably unrequited love story time and time again and I am definitely not at all interested in any of the romantic entanglements.

The side of the show’s competing plotlines that is more interesting to me is happening on the other side of the “shadow fold”. Based on Barduga’s Six of Crows books, it is there that the story is focused on the gang of ruffians called “The Dregs” and the production design is more reminiscent of Carnival Row than Game of Thrones. In Shadow and Bone, the interplay between the leader of the group, Kaz (Freddy Carter), and his friends Inej (Anita Suman) and Jesper (Kit Young) has a lot of familiar tropes to it as well. Kaz is clearly infatuated with Inej, Jesper is a sharpshooting Doc Holiday type quipster, Inej is a former prostitute with a series of secrets. But the mere fact of the moral ambiguity of the characters, the disparity of their circumstances, and the way they are forced to navigate the difficulties of the world while treading on the edge of their own morality and sanity make for a far more interesting story than another rehash of the “hero’s journey”.

Kaz is the leader of the group and has the most screen time. He is an interesting character in a world like this because he seems to have very little power or influence beyond his own cunning but he carries himself as if he runs the whole world. Freddy Carter seems to be playing Kaz as something of a cross between Tyrion Lannister and Draco Malfoy and that is honestly a combo that seems to work. The other Dregs are also adding up to be pretty compelling. Between the way the character is divided morally between her quest for vengeance and her religious devotion and the depth and humor that Anita Suman brings to the character, Inej seems as though she can add up to far more than another “hooker with a heart of gold” trope. Or at least I can hope that will be the case. There hasn’t been any time dedicated to Jesper besides his being a fun-loving guy who is good with a gun, but that does mean he brings some much-needed levity to the show.

In “We’re All Someone’s Monster,” the shadowy “Menagerie” that Kaz is paying to free Inej is introduced and threatens to split the group apart and keep them from their one million dollar payday. (There is some random word for money in the world but every time they use it I just get irritated.) The mechanics and double-crosses that pepper the episode and the conflicting and unknowable allegiances of the characters made for the best part of the series through those first two episodes. In the end, it seems that Kaz, Jesper, and Inej will all cross the “shadow fold” and land directly in the main plot.

After watching these two episodes I also find myself at a crossroads. Should I continue with the show? Should I give in and actually learn about Barduga’s universe in more depth? It really could go either way, as could the show. There is a real potential in Shadow and Bone. The characters have depth and the main characters have great chemistry. Ben Barnes was basically born to play a smoldering dark, dangerous, prince in a fantasy drama. But the whole show seems uneasy, unsettled, unwilling to really give in to the premise and trust the characters or the audience. I remain hopeful that the show will right itself in the next few episodes but I’m also not particularly excited to log in and start them up.