A couple of weeks ago I found myself scrolling through my partner’s collection of previously downloaded Xbox Live Gold games, and stumbled across a visual novel called Coffee Talk. I’ll admit, at first, I didn’t think much of it seeing the screenshots of elves and werewolves, and figured it would be a story playing out some teenage vampire fantasies.

But the game stuck in my mind because I have always had a dream of owning a coffee shop. It is a romanticised reality in my mind, the thought of making unique drinks, having regular customers and hearing stories about their lives every day. I’ve always wanted to have that, and I suppose I decided to live vicariously through this game and give it a chance. Not many games will give you the opportunity to own a coffee shop, after all, and I do enjoy an indie visual novel. 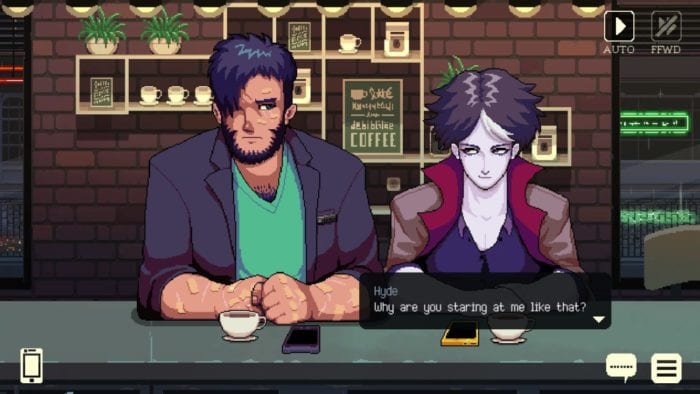 The game itself is a very relaxing one, the kind of game to play on a Sunday afternoon wrapped in a blanket, probably with a warm drink of your own. You own a coffee shop in a futuristic universe where you have guests who are of all different species, and you get to know them all as they return to the shop. Your most loyal customer and friend is the overworked, espresso-loving Freya. She comes in most every day for her usual and to write her novel. Freya is instantly likeable and she gave me some laughs too during her sleep-deprived writing crisis.

I really enjoyed Coffee Talk, and it did fulfil my need to feel like I owned my own coffee shop while I played, and the relaxation factor is a huge plus for me. The amazing soundtrack creates a lot of atmosphere. But I didn’t want to get too much into the main stories here, because there is a theory behind the end of the game that totally blew my mind when I finished. So let’s talk about Neil. 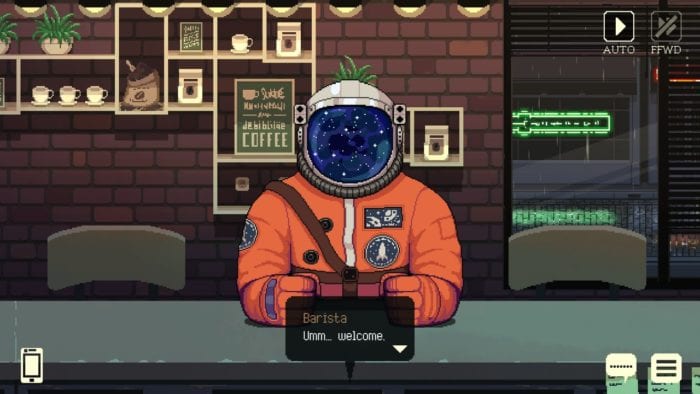 Neil is a time-travelling alien who comes into the shop twice during the main story, he is on a quest to breed with a human to create a half breed of his kind and humanity. He doesn’t seem to be having any success blending in with humans, and doesn’t show up later in the game. It makes you wonder where he has gotten to. But when you reach the end of the game, and after the credits roll, a man appears on screen, a young man with a stylish fringe wearing a doctors uniform. Even as our character, we don’t recognise him until he mentions that he has worked here before, it then comes back to you that Neil tested his communication skills by doing a shift here, and Neil is in front of us now, not as the man in the spacesuit sorely sticking out against the rest of the public, but as this regular guy. This is where things get super crazy, Neil claims he’s figured out that we are one of his kind, with what seems to be extremely advanced communication skills in my opinion. We bond over the fact that we have made mistakes and almost accidentally revealed ourselves in other timelines by knowing information we shouldn’t know yet, and Neil wants us to show him by communicating how he does with his kind.

This completely shocked me. I don’t know if maybe other people saw it coming, but in this cosy visual novel of making coffee and listening to quirky stories, I never once expected to turn out to be a time-travelling alien! The game gives you a hint here that you haven’t seen everything yet, only to take you back to the main menu. Surely this can’t be it, I thought, not after that. So I did some looking into it and discovered where to go from the end of the game. 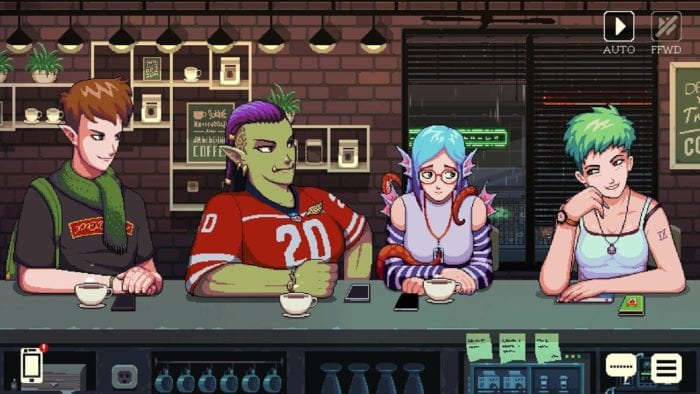 If you’re curious, once you are finished, you can access the true ending by completing a second play-through. You can fast forward through the dialogue for the most part, but pay close attention to days 1, 3, 8 and 14, as these are the days your barista talked about messing up with their information, and you’ll see the new version of what happened on those days.

Supposedly, we are showing Neil these mistakes through a new form of communication. It may be easy to dismiss this by saying that we showed him once the screen went blank after the ending, but I think that by completing these days again, we are showing him as the player, perhaps our kind can revisit memories and share them with each other, and that’s what is happening here.

I also question the fact that when your character mentions this they say they made these mistakes in some other timelines. Does that mean by completing this second play-through we are visiting another timeline different from the first? Because it doesn’t make much sense to think this dialogue that didn’t happen before suddenly appears on these days. I think the whole second play-through is set in a new timeline. Including the secret true ending. 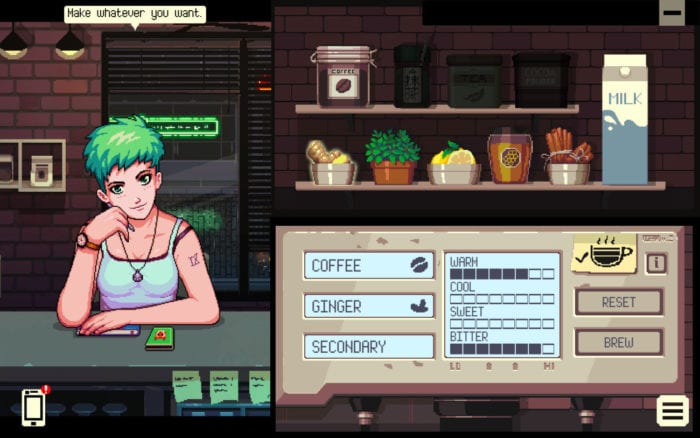 When you encounter Neil this second time, you are prompted to serve him a special drink to make him feel emotions. You should serve him a Milky Way, made up of milk, honey and mint. I believe this triggers the true ending. Now, when you reach the end and Freya comes back to the shop to tell you the draft for her novel was approved, she based the main character on the barista of the coffee shop who can travel between timelines, and she cheekily lets us know that she’s aware of what we are. But after the credits, when Neil returns again, it appears she may not know fully. Neil claims that she’s worked it out, and she is clever. But he asks us why we do all of this, opening the coffee shop and getting to know all these people. Our character says something fascinating: “I just like to make sure things go alright… Besides, I have to make sure that I’ll exist on earth.”

This is a loaded statement. At first, I don’t think I understood it the way I should have. I interpreted it more as our barista wanting to feel that they have a presence here on earth that is recognised and will be remembered, the same way that humans want to have a legacy to leave behind. But as it sunk in, I was so wrong. The theory here is that we are the half breed that Neil created through his mission, or one of them, at least. It all makes complete sense. There must have been some reason that our character felt it important to ensure their existence, so they visited a timeline in the past before Neil completed his mission, before Neil maybe had even arrived on earth, and opened Coffee Talk. The coffee shop connects people, and they knew that Neil would find this place, being the only coffee shop open at night, they would then assist him in connecting with people through their customers who love to talk and share their insights and Neil would learn through this and therefore go on to find love with a human and create our character. That’s why we are such an advanced version of Neil’s kind, we are the superior hybrid of alien and human with the knowledge to blend in amongst the humans.

It’s such a huge plot twist in a game where I truly didn’t expect any kind of plot twist. I thought Gala turning into a werewolf and almost trashing the place would be the highlight of the drama, but boy was I wrong. 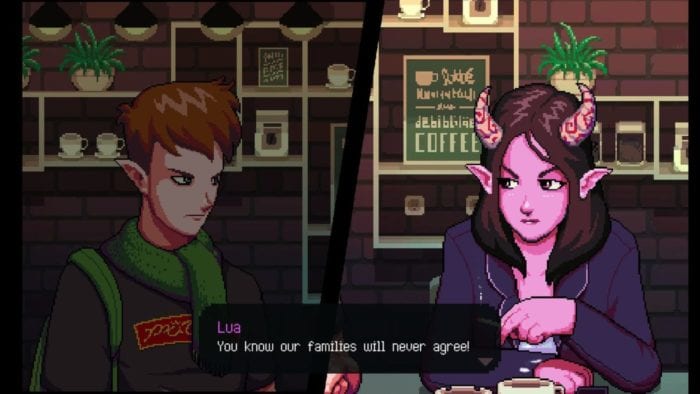 I question if Neil himself is even aware of the fact that we are his offspring because, in the first ending, we seem to be a little surprised that he learned that we were simply one of his kind. But when we mention ensuring our existence on earth, he laughs and says it is an important task indeed. So, does Neil know exactly who we are? Or are we so advanced that our creator isn’t aware that we in this timeline are his creation? Does he simply think we are another of his kind who perhaps has been around longer and learned so much?

While it is possible that we are just an alien like Neil, I believe fully that this theory is correct and we are the hybrid creation. But I also like to believe that throughout the first and second play-through, we were able to feel emotion and that we truly did connect to every character that we got to know throughout the game. Perhaps I just feel that way because it would be upsetting to think we didn’t care for them at all as a character when as the player we surely do care for them. But I think there is some truth to it because our barista seems to genuinely like connecting their customers and hearing their stories. Are they emotionally attached, or simply gathering data to become more relatable to earth species? I like to hope that it’s the first or at least both! 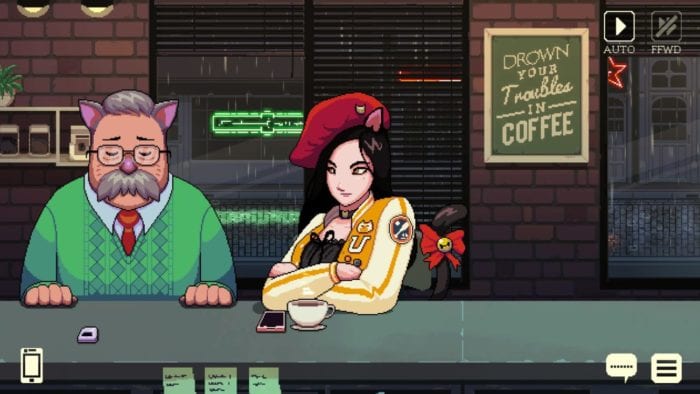 I would sure love for the developers to consider a sequel for Coffee Talk. The special thing about this game, and about many indie visual novels, is that it’s an escape into another world, and it’s a happy, extremely cosy world in this case. Perhaps they could bring it back with both returning and new characters, a Coffee Talk where we are already as the player aware of who we are because Coffee Talk is a game that you end up hoping continues forever. You’ll miss the characters and long to know the truth behind who you really are. Hopefully, this theory has been enlightening for other players out there, I was truly impressed and completely shocked by the ending to this game! If you are like my man and you snap up all the free Xbox Live Gold games each month, then dig this one up from your library. If not, I’d recommend you buy it and give it a try.