The Who Sell Out

And, the fifth, just released in April by Polydor/UMC, is The Who Sell Out Super Deluxe Edition, a seven disc set (two 7” records and five CDs). There are also two new vinyl versions, too, black, and colored vinyl. 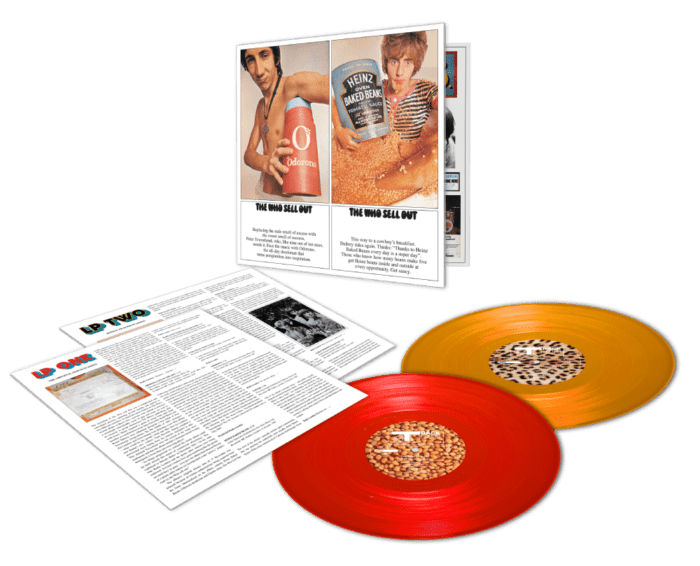 Because I didn’t need them, I sold the Phases box set and the original one disc CD version. However, I still have my first version on LP, the Deluxe Edition, and now the Super Deluxe Edition.

When I first got the original Sell Out on vinyl, I thought Side One and part of Side Two were The Who’s interpretation of what an English pop/rock radio station called Radio London would sound like. One that only played songs by The Who. It was filled with radio station jingles, short and long form commercials (that are really songs), and songs. These are mostly written by guitarist Pete Townshend and bassist John Entwistle.

The songs and commercials are sung by lead vocalist Roger Daltrey, Townshend, Entwistle, and drummer Keith Moon. PAMS Productions from Dallas, Texas produced the jingles. This is a company that produced jingles for radio stations all over the world in the ‘60s and ‘70s.

It wasn’t until much later did I learn that England and the United Kingdom didn’t really have any pop/rock radio stations until late 1967! So, this album was a tribute to something called “pirate radio.”

According to “The Offshore Radio Revolution in Britain 1964-2004” there was a growing demand for recorded pop and rock music to be played on the radio in the United Kingdom in the early to late ‘60s. However, the BBC (British Broadcasting Corporation), did not think highly of that type of music and would not play it. Also, the agreement the BBC had with the musician’s union limited the amount of recorded music that could be played.

The most well known of these pirate stations were Radio Caroline and Radio London. The latter was used by The Who on Sell Out. By 1967 there were ten of these stations anchored in international waters off of the coast of the United Kingdom. Because of the popularity of these stations, the BBC created several new services. One of them was BBC Radio 1, which still has a pop and rock format.

A lot of the DJs from the pirate stations went to work for BBC Radio 1, even before they were outlawed. Later in 1967, the government outlawed pirate radio stations from broadcasting in international waters with the Marine Broadcasting Offenses Act.

In the essay that Pete Townshend wrote for this new version of Sell Out, Townshend says that, “late in the summer of 1967 Chris Stamp (one of The Who’s managers at that time) sat in his really quite unpleasant office in Soho, and informed me that he was going to release a selection of recordings that The Who had made here and there, some on our travels in the USA between performing our first shows there.”

Townshend told Stamp that, “we couldn’t possibly release it, we needed more proper songs, or at least the right to include some of our recent singles.”

However, Stamp was adamant that they needed an album by The Who by Christmas, and that was what they had. Townshend said that he needed, “something to frame the disconnected songs, to make them seem more cohesive and focused.”

So, with the introduction of pop and rock music on BBC Radio 1 in September of 1967, and the demise of the pirate radio stations, Townshend, “wanted to thank them and pay tribute.”

Then, as Townshend says, “It was from this very strange mix of scrambled ideas that the idea to make The Who’s next album into a pirate radio show emerged.”

As I said earlier, Side One of the original vinyl release sounds like what an English pop/rock radio station would sound like if it only played songs by The Who, but not all of Side Two does. So, after reading Townshend’s new essay, I decided to listen again to my vinyl version. I wanted to hear again where exactly the radio show ended, and the rest of the album began.

From the start of Side One’s “Radio London (Monday…Tuesday…)” jingle to Side Two’s commercial for “Medac,” the album sounds like a pirate radio show from a station called Radio London. However, inexplicably, the commercials and the jingles stop after “Medac.”

Then, the radio station ends and the rest of the album begins, and we just get four more songs. The songs are “Relax,” “Silas Stingy,” “Sunrise,” and “Rael 1 & 2.”

When the two-CD Deluxe Edition was released in 2009, I hoped that they would add more jingles and commercials to the songs on Side Two of the album to make it sound more like Side One’s pirate radio show. However, they are only added as bonus tracks. The bonus tracks on the Deluxe version include more than enough jingles, commercials, and songs to have continued the pirate radio show with the songs on Side Two.

And, the commercial/songs “Coke After Coke,” “John Mason Cars,” “Bag O’Nails,” “Things Go Better With Coke,” “Top Gear,” and especially “Jaguar,” a song about the car, not the animal, could also have been inserted as well.

Vinyl only allows about 20-22 minutes per a side. So, it would have been impossible to add much more to Side Two. It still would have been good to hear “Someone’s Coming,” “Early Morning Cold Taxi,” “Glittering Girl,” “Girl’s Eyes,” and “Sodding About.”

However, the other three CDs offer alternate takes, songs that didn’t appear on an album until 1974’s Odds & Sods compilation and more, and demos. But, still no jingles and commercials added to Side Two of the original release.

CD One: The Original Mono Album

CD One’s bonus tracks include many A-sides and B-sides of singles from 1967 and 1968, and songs that were cut from Sell Out. However, we don’t get anything rare until near the end of the disc with “Sunn Equipment Promo Spots” and “Great Shakes.” By the way, if you are not used to listening to mono recordings, don’t be surprised that the same sound comes out of each of your speakers.

The recently discovered “spots,” recorded for Sunn, the Portland, Oregon sound equipment company that provided the gear (that they used, AND destroyed) on their US tours in ‘67 and ‘68, and the Australian tour in ‘68. “Great Shakes” is a real ad for the General Foods milkshake mix.

This disc is all stereo. So, it’s much more interesting and easy to listen to compared to the flat sound of the first all mono disc. CD Two’s bonus tracks mostly include earlier or rejected versions of songs for Sell Out and an abandoned instrumental album. Two very fun Coke commercials (mentioned above), both previously released, are the highlight of this disc.

However, it is not until Disc Three that we start to get to the most interesting material. It includes unreleased outtakes, alternate versions (many missing some instruments of the final versions), plus studio chat.

I have always enjoyed getting behind the scenes of the production of some of my favorite TV shows and movies. That allows me to get an understanding of the creative process. Here on Disc Three we get a chance to hear The Who actually creating the songs. It is entertaining to hear studio chatter, especially of drummer Keith Moon (also known as “Moon the Loon” for his antics both on the stage and off) having fun in the studio.

Disc Four, “The Road to Tommy,” features tracks recorded in 1968. This disc feels very similar to 1974’s Odds & Sods, a collection of songs from various EPs and album outtakes. It even shares several of the same songs, like “Faith in Something Bigger,” Little Billy,” and “Dogs.”

Finally, Disc Five has 14 of Townshend’s previously unreleased original demos. I have been collecting Townshend’s demos and The Who’s studio outtakes on both official and unofficial releases for several years. I purchased one of my first bootleg LPs, The Genius of Pete Townshend/I.B.C. Demo’s, at Dirt Cheap, a local record store in Lincoln, Nebraska in the early ‘80s.

IBC is one of the studios where The Who recorded Sell Out. However, Townsend recorded his demos at home or on the road, so the album is incorrectly titled. Both sides of the I.B.C. Demo’s feature some of the same recordings found on Disc Five. The Genius of Pete Townshend, by the way, features his demos for the Lifehouse project. Most of the songs later appeared as full group versions on Who’s Next. After that, Townshend released the demos on a solo album called Who Came First.

While I have heard some of the demos on this disc before on official and unofficial releases, I don’t recall hearing “Kids! Do You Want Kids?” and “Thinking Of You All The While (Sunrise)” before. I enjoyed listening to this last disc as much as the third disc because they both offered me things that I have never heard before from the recording studio and Townshend’s home studio.

The Who Sell Out (Super Deluxe)

Why No CD Six?

A sixth disc in this set should have given us a recreation of what the whole original album should have sounded like. This would be if Side Two had included a similar amount of jingles and commercials as Side One.

Following the “jingle, commercial/commercial, song” format at the end of Side One (Radio London – You’re A Pussycat, Speakeasy/Rotosound Strings, I Can See For Miles), this is what I would have liked to have seen on a sixth CD.

A proposed Disc Six would leave all of Side One intact. It would then have all of the tracks from Side Two plus some of the bonus tracks from both the Deluxe and Super Deluxe Editions. A super deluxe tribute to the pirate radio station, Radio London.

Tracks 1-7 from Side One of the original album, then…

With these additions, a proposed CD Six would continue the pirate radio show throughout the entire disc. 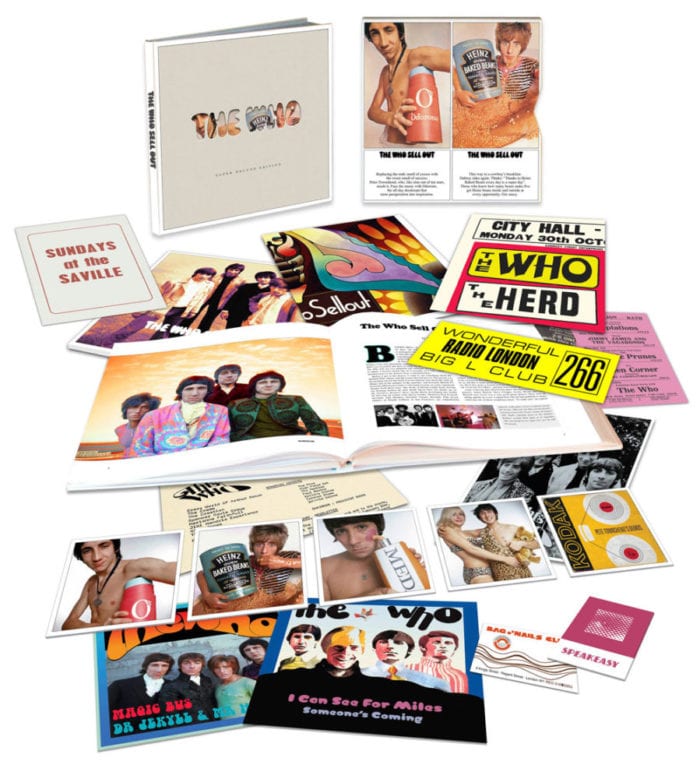 The 80 page color booklet includes full descriptions and recording dates of each track, and the lyrics for the original 13 tracks. It also includes essays (including that new one from Townshend) about the creation of the album and select songs on the album. There are several black & white and color photos and some of the original ads that some of the songs are based.

There are several replica inserts, most of which I have never seen. They include: Adrian George’s psychedelic poster; Sundays at the Seville concert program; 1967 Who gig poster; Bag O’Nails club card; Radio London sticker; Who fan club photo; Who gig flyer; 1968 fan club newsletter; and, Speakeasy club membership card.

Can Non-Who Fans Enjoy It?

This is an essential set for big Who fans like me. Also, anyone who has an interest in British pop/rock music and pirate radio of the ‘60s would enjoy it, too.

However, I wish that a sixth disc would have integrated the jingles, commercials, and other songs that were included as bonus tracks to the original album’s Side Two. Combined with an already fully realized Side One, it would have have recreated what the pirate radio station Radio London sounded like in 1967. One that only played the music of The Who.