Most of the imagery in the striking teaser trailer for Season 2 of Evil won’t have much meaning to those that haven’t seen the first season. For fans, there’s plenty to talk about.

I wrote on the chilling diegesis of Goat Therapist, and his presence is punctuated further by a sketch from an unrevealed artist. It’s a quick sequence of shots that all but confirms that this demon is not confined to the minds of our main characters. Whether or not the shot of David grimly glancing up from a table is actually in sequence with the drawing of Goat Therapist, the implications of his tangible involvement in the story is unnerving.

Shortly after, Leland (Michael Emerson) walks into a room with the words DIE YOU STUPID PIG BASTARD written in either red paint or blood, and Leland appears to be highly amused by this. Knowing Leland, anything that he finds funny is probably very bad for everybody else. I’m not quite sure what this could be referring to; perhaps Kristen’s detective friend Mira Byrd (Kristen Connolly)? Mira has interacted with Kristen enough times that she could very well have painted a target on her back.

One of the most striking moments of the trailer by far is what appears to be a vision of hell itself, or perhaps some sort of apocalypse: red hues, lightning, soot, and decaying buildings and clouds—immediately followed by what looks like Ben wearing some sort of headgear. The shot progression suggests that this is what Ben is witnessing through the headset. What really gets me, however, is the tears streaming down his face as he sobs. Even if this isn’t what he’s seeing, what could possibly cause the rational, skeptical Ben to suffer this sort of emotional breakdown? This is Ben the Magnificent we’re talking about: his first instinct is to consider, and oftentimes discover, a physical, chemical or technological reason for alleged phenomena.The dude is a genius. Whatever it is that breaks him must be huge. Ben is also visited by what appears to be a female version of George, which produces cracks in the previously-established status of George as a product of late-night cheap horror movie prosthetics causing nightmares. 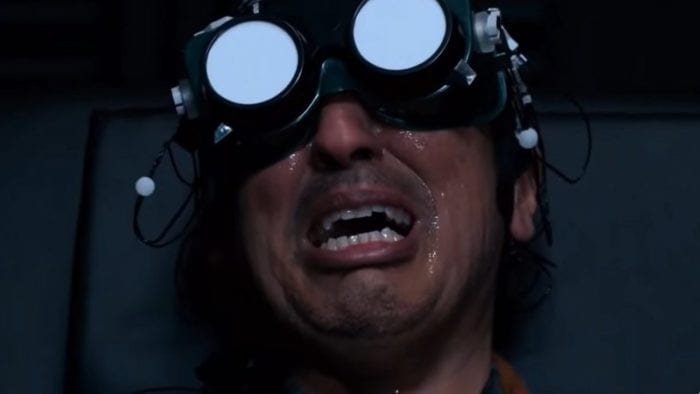 So…did Leland just stab Kristen’s mom Sheryl in the side of the head? At the beginning of the trailer he pulled a spiky wedding cake decoration and delivered a gruesome blow to Sheryl’s temple. I’m very suspicious that this is some sort of dream sequence or power fantasy for Leland: killing Sheryl seems like playing too many of his cards too early in his vendetta against Kristen, but at the same time, killing Kristen’s mother is the kind of impulsive, rage-fueled action Leland is capable of.

Towards the end of the trailer there are a couple of interesting shots: Leland is in some sort of classroom, holding what looks like a bottle of ammonia and wearing a rosary, as a nun brandishes a knife at him. Leland really seems to be accelerating his malevolance in this season, and a couple of his moments in this trailer seem to suggest that he’s setting his sights larger than Kristen and David.

My favorite shot comes near the very end, as David is visited by a gigantic winged figure with glowing red eyes, disfigured ribcage, mouth apparently sewn shut, and what appears to be a glowing, zipper-like line down its chest. At least, it definitely appears to be David’s living space. Either way, the next shot shows David collapsing in pain or anguish. Given David’s struggles with drugs, this could be either the next big rock in his fight to overcome his addiction, or an actual visitation. That ambiguity is what makes Evil such a thrillingly effective show.

The finale of Season 1 found Kristen apparently setting off, armed with an ice axe, to confront Orson LeRoux (Darren Pettie), the allegedly reformed murderer from the first episode. She returned home and was startled to find that a crucifix burned her hand. Did she kill Leroux, and did that action tarnish her soul to result in the burning? Is she possessed? The S2 trailer seems to confirm that she did indeed slaughter LeRoux with the ice axe, and she continues to burn herself with the crucifix end of a rosary. Towards the end of the first season, LeRoux appeared to try to reconcile with Kristen. I’m inclined to believe that his efforts were genuine and Kristen killed a man on a path to redemption. Either way, Kristen is most definitely on a darker path, given both her crucifix burns and the way she looks at Ben in the hospital at the very end of the trailer.

Most excitingly, Season 2 of Evil seems to further push things in the direction of tangible demons, but knowing creators Michelle and Robert King, we’ll probably have additional reasons to suspect otherwise. I predict that the script will be flipped somewhat: instead of being ambiguous and suggesting ways that the supernatural could have a natural source, Season 2 will put its characters and viewers on active defense mode, searching and hoping for that rational explanation that often came in the first season.

Some other lingering questions: who is Kristen striking at the convenience store? Who is the new demon visiting her? Who is the guy she glances over in the other car at the stoplight? There’s such a sense of paranoia and fear around the events of the show, any of it could have a profound impact.

In one week, we’ll once again get enveloped in the awesome enigmas of Evil, and I for one cannot wait to dive headfirst into new psychological theories and prospects of spiritual horror.