Ultrasound is somewhat mysterious, somewhat creepy and certainly compelling. It is definitely a science-fiction film (sci-fi “lite” perhaps), but that genre isn’t apparent at least for the first 20 minutes or so: instead it looks like an intriguing drama. Once those techie elements come in, the intrigue deepens, and the overall puzzle really is satisfying to piece together.

But what’s it about, though? Let me see: different kinds of dependent relationships; power that people can have over each other; gaslighting; casual sex and non-casual implications; and research ethics. That sounds much more serious than the film really is. It’s entertaining, in kind of a spellbinding way, and full of fascinating characters.

Ultrasound opens with Glen (Vincent Kartheiser, Mad Men) driving home in heavy rain when his car runs into trouble. He is welcomed into the home of Art (Bob Stephenson, Lady Bird, Just Add Magic) and Cyndi (Chelsea Lopez, Phoenix Forgotten) but they are such an odd and over-familiar couple that I was worried for Glen at first in a Motel Hell kind of way.

He spends a very peculiar (but not all bad) night with them… and then we are introduced to two other sets of characters, with links between them only gradually brought into play. Firstly, we meet Katie (Rainey Qualley, Love in the Time of Corona), who might or might not be pregnant, though she is definitely in love with a rather controlling Alex (Chris Gartin, Tremors II: Aftershocks). Next comes Shannon (Breeda Wool, Mr. Mercedes), who is being inducted into some kind of research position by Dr Conners (Tunde Adebimpe, The Girlfriend Experience).

Each of these groups of characters play out their own story, which sometimes overlap; and each character has their own perspective. The day before I watched Ultrasound, I watched The Father at the cinema, and was deeply impressed with how a combination of the writing and the editing presented a perspective as being unreliable. Ultrasound does something similar, but with several different characters, and it can be a bit of a ride trying to work out which character—if any of them—knows what’s really going on around them. 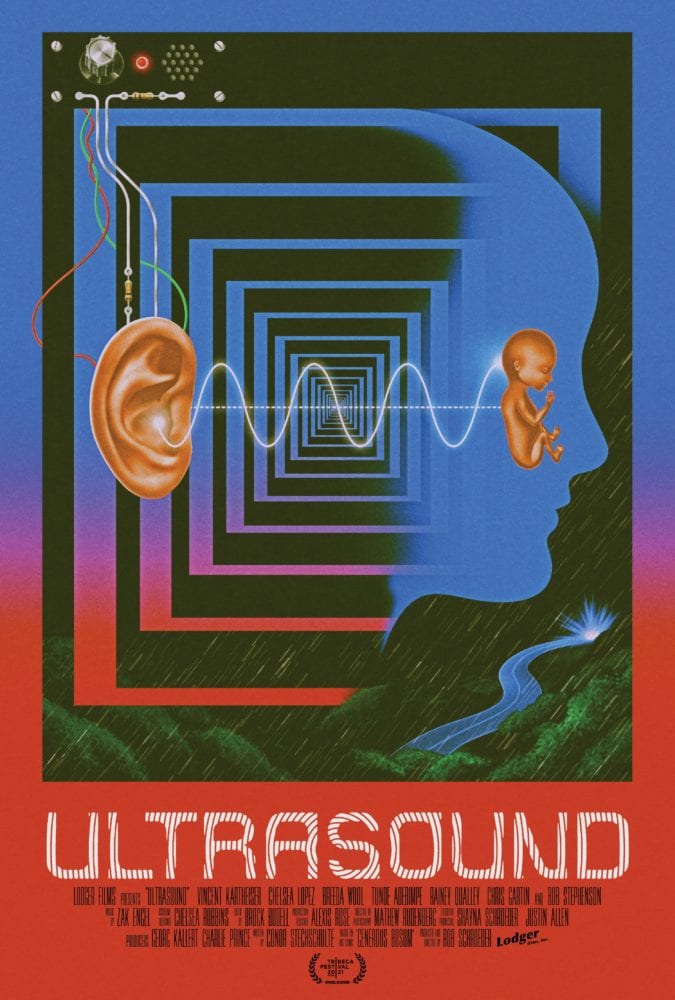 Elements of the story are treated differently in Ultrasound, making it seem at first as though they are quite separate. Director Rob Schroeder brings together a wide range of different techniques, and makes us question what we’re seeing and hearing and why with every moment of contrast. It’s not messy in the slightest: this salad of styles drew me in to the film more, rather than putting me off.

The first clear contrast was in the change of Mathew Rudenberg’s cinematography between Glen’s opening scenes and Katie’s, and it was so sharp that it felt as though we’d left Glen behind completely. The camera’s attention had kept moving in Glen’s rather surreal scenes, and the lighting gave them a dreamlike effect. In contrast, our first view of Katie is from underneath the water of her hotel swimming pool as she dives in; crisp, bright and utterly clear as she emerges. Brief and almost subtle mirror effects are also introduced to show that although Katie sees her life pretty clearly, we see it differently. Throughout the film, there are occasional brief flashes of alternate possibilities, which could be clues to what is going on, clues to what the characters think is going on, or both.

And then there was the sound. By the end of Ultrasound, I was entranced by Zak Engel’s score, but there was a lot more to the use of sound than that in this film. Music, sound design and experimental (therapeutic?) tones within the story sometimes wove together so that I couldn’t say where one started and another began. Sound played a great part in the plot itself, as things developed, so there’s no wonder such a lot of effort went into it; and also no surprise to discover that Schroeder’s background includes music videos.

I must say the use of sound (within the film production and the film’s story) gave me real pause for thought: how much are our moods, feelings or thoughts influenced by auditory stimulation, and how much that we might never even notice?

Just as there are various layers of sound in a film (from a background hum to a familiar song), the concept of levels or tiers cropped up in Ultrasound’s story more than once. There is no single “reveal” to Ultrasound’s mystery, but a number of them, some of which seem to be designed to fool the people we’re watching… and if we’ve trusted them, more fool us too. With issues of trust come questions of ethics, and Ultrasound raises some pretty big ones. I’m not going to give anything away, but they include issues of politics, scientific research and free will. The film does not give us any clear message as such, but rather encourages us to think about our experiences.

Ultrasound was based on the graphic novel Generous Bosom, written by cartoonist Conor Stechschulte, who also wrote the film’s screenplay. I’ve not read the book (or any of its volumes), and I’d be fascinated to know how closely the screenplay reflects the source. Particularly, I’d love to visit some of the characters there, especially the one who—in seemingly small ways—connected the various parts together: Art. Bob Stephenson was the actor who impressed me the most here: it can’t have been easy playing someone who was both strange and endearing, and who was just as believable no matter which layer of his personality was on display.

Ultrasound has its world premiere at Tribeca, 15 June 2021.

Alix discovered both David Lynch and Hardware in 1990, and has been seeking out weird and nasty films ever since (though their tastes have become broader and more cosmopolitan). A few years ago, Alix discovered a fondness for genre festivals and a knack for writing about films, and now cannot seem to stop. They especially appreciate wit and representation on screen, and introducing old favourites to their adolescent son.