In a new weekly column called Beyond the Screen, author A. J. Black unpacks what we’re all discussing from the world of cinema and television. This time, he takes a look at the second season of Star Trek: Picard after a brand new trailer…

Everything about Star Trek in the modern era, nay the Alex Kurtzman era, can be considered as looking through the rear view mirror.

Discovery pivoted almost immediately to indulging fans by shoring up open points of continuity, be it the historical Federation-Klingon wars or the adventures of Captain Christopher Pike and a younger Spock before the events of the 1960s series—events almost nobody beyond tie-in fiction die-hards were riveted to see. Lower Decks is built on the mockery of 1990s Star Trek tropes, particularly from that era’s cultural colossus The Next Generation; lampooning characters and in-continuity points that only true Star Trek obsessives will really laugh hard at (I know this because I am one of them). And what’s to come looks to be more of the same—Strange New Worlds devoted to the pre-Original Series adventures of the U.S.S. Enterprise, Prodigy calling back heavily to Voyager by placing Kate Mulgrew’s Captain Kathryn Janeway front and centre, and so on.

None are a more egregious example of pointed nostalgic referencing, however, than Star Trek: Picard. 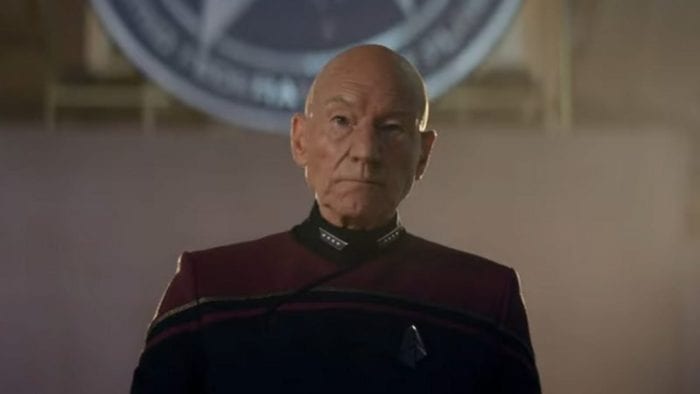 The project that finally convinced Sir Patrick Stewart to emerge from Starfleet retirement and take up the Captain’s chair once again, yet the Kurtzman-created, Michael Chabon fronted first season stood at pains to convince audiences that this would not simply be TNG, as The Next Generation is known, updated and re-heated. It was a different time in a different galaxy almost, one in which the Federation—evoking Trumpian isolationism—was giving up on its allies and retreating into its own fearful shell, triggered by the psychological scar of terrorism.

Picard would be old, disaffected, his days as the Captain we knew and love long behind him, and an entirely different assortment of new characters would steadily help him his find his mojo, such as cocky rogue Cristobal Rios (Santiago Cabrera) and intense former colleague Raffi Musiker (Michelle Hurd), all while they worked to expose a galactic conspiracy that had direct ties to why the Federation had lost its soul in the first place.

Yet even with an entirely new amount of world-building in place—transforming the end of a 24th century that started in 1987 for TNG representing a future utopia and ended in 2002 with Star Trek Nemesis suggesting a stale geopolitical system ravaged by intergalactic war—Picard wanted to establish 2399 as a desolate, post-truth dystopia in the making. At the same time, the series could not quite let go of Picard’s own past, or the legacy of TNG. The Borg served as a key factor in the first season’s story, ‘The Impossible Box’ revealing the demons that still haunt Jean-Luc; ‘Nepenthe’ saw him at home with the Rikers, dropping in on the idyll enjoyed by Will & Deanna for what, in a show that fully worked, would not have ended up the best episode of the season; and the catharsis for Picard was, of course, Data. The MVP of TNG often, second only to Spock as the character in Star Trek who best represents the exploration of the human condition, Picard asked for our forgiveness after his throwaway and emotionally bereft death in Nemesis.

Far from putting the ghost of TNG to bed with Data’s epilogue—his final goodbye—Picard’s delayed (if not exactly long awaited) second season seems to be doubling down on the series Kurtzman and his writing staff, including new showrunners Akiva Goldsman & Terry Matalas, seem to believe the fans actually want. Not necessarily TNG reborn—Picard will never be that—but the cherry picked aspects of TNG repackaged. Hence the return of omnipotent, mercurial trickster Q (John de Lancie) in a major, much hyped role. Hence the announcement that Whoopi Goldberg will reappear as ethereal alien (sort of) guide Guinan. Hence the strong likelihood that not only will Riker & Troi also reappear, but also Geordi La Forge will make an appearance (given the character, in semi-canonical broader Picard fiction is connected to Picard’s current life and LeVar Burton had had discussions to guest). Slowly and surely, the composite elements of what people loved about TNG, or the 1990s era, are taking shape. 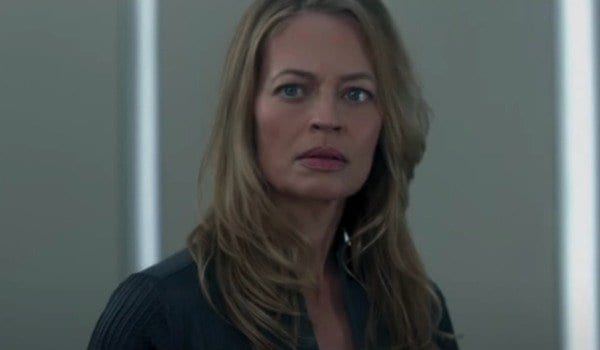 You only have to look at the Season 2 trailer to recognise this. Rios, Raffi, Soji etc… they barely get a look in, certainly in this short teaser. The climactic revelation leans on Seven of Nine (Jeri Ryan), bumped up to a regular after a few successful appearances in the first season, and has set Twitter ablaze thanks not to her lack of Borg appendages in the alternate reality scenario the season appears to be indulging, but the fact she is wearing a wedding ring.

Not since the fan boards for The X-Files in 1998, when Fox Mulder was spotted wearing a wedding band in the episode ‘Travelers’, have fans been in such a tizzy about matrimony. Unlike in The X-Files, which hinted at the truth of the ring rather than confirm or even reference it again, Picard will revel in Seven’s surprise husband (or more likely wife, because no matter how much social media wills it, Robert Beltran is very unlikely to show up as Mr Chakotay of Nine!). The point is that Picard is promoting its second season heavily on the existing jewels in the crown, the established totems that draw in viewers. Recognisable characters, beloved old faces, and familiar situations.

While we don’t know exact plot specifics, or that the plot will encompass the entire season, the teaser suggests that Q’s involvement prefigures a modern reworking, or certainly homage to, TNG’s Season 6 episode ‘Tapestry’. In that episode, Q shows Picard an alternate version of his future in a Dickensian-style narrative designed to make Picard aware that the hubris of youth that almost led to his death helped forge the man we know and love. The majority of Q stories were romps designed to play up his position as a sometimes malevolent, often ridiculous celestial prankster, but ‘Tapestry’ had an emotional heft and resonance that Picard seems very keenly to be leaning toward.

The TNG finale ‘All Good Things…’, often venerated as one of the strongest episodes of ’90s Star Trek—a story in which Q places Picard on trial again in a bookend to TNG’s premiere ‘Encounter at Farpoint’ as three different alternate realities begin to collide—also appears to be a key touchstone. Q even said in the first promo “the trial never ends…”, suggesting Jean-Luc will again be forced to take an impassioned moral stance to defend humanity’s very existence from Q’s judgement. Picard knows the greatest hits, episodes and characters fans keenly remember and lionise, serve a major impetus to keep Star Trek fans invested in the series.

Whether this is the right move for a show like Picard is open to question. On the one hand, it makes sense. Why else create a series based around the lead character of a beloved TV show if you don’t indulge in all of the wonders that show had to offer? Is anyone who didn’t watch TNG or at least ’90s era Star Trek going to be attracted to the broader franchise by Picard? It’s extremely unlikely, precisely because the show is not designed to reflect the conceptual idea of the franchise at all. Picard might now sort of be in charge of a ship—Rios’ bulky Millennium Falcon, the La Sirena—but Picard is not a series with any intention of exploring the galaxy, a la historical Star Trek series. I’m not entirely convinced Discovery, despite being ostensibly set up to do so, has those aspirations either. Strange New Worlds might but that series equally could pull an Enterprise Season 4, choosing instead to sketch in canon or expand points of existing TOS continuity, given it is set in a very specific 23rd century time frame. Lower Decks will only explore new life in the form of pastiche and Prodigy… it’s too soon to tell, but given the child-focused, Nickelodeon nature of the production, it is more likely to deal in morality tales than world-building.

Picard suggests, then, the continued broader tapestry of the modern Star Trek universe as one of introspection and cannibalism than true innovation. Jean-Luc and the surrounding characters seem aware they have been thrown into an alternate reality, one where perhaps Picard never did leave Starfleet, where perhaps the attack on Mars never did take place, “the end of the road not taken…” as Q puts it. Alternate universe stories exist in their abundance in Star Trek, one of the best being within TNG in ‘Yesterday’s Enterprise’ (maybe another touchstone as that episode significantly featured Guinan too). They are also very keenly in vogue in modern storytelling. The Marvel Cinematic Universe is about to embrace, head on, the idea of a multiverse. Star Trek itself did just that with J.J. Abrams rebooted movies.

Yet in the previous era, storylines such as the one suggested in this teaser often avoided being stretched, as one might assume this will be, into a ten part story. Two parts and out would have been the old maxim. Picard looks to be crafting more of a fable with Q involved; perhaps an alternative possibility that tracks with the broader thematic ideas in Picard as a series—age and change. Picard went from a show about a hero in his emeritus years rediscovering a zest for life to a questionable death and ‘rebirth’ in ‘Et In Arcadia Ego’ which could be another reason Q has been re-drafted.

The show is very clearly acknowledging John de Lancie’s age, presenting Q as a white haired old man, which many in the fandom speculated might happen—in part to avoid tricky CGI issues but also as Q would, in character, try and taunt Picard with an aged reflection in the mirror. The series will hopefully use whatever reality Q has presumably shifted the characters into, for whatever reason, to acknowledge the unusual transformation of Picard into a ‘golem’ of sorts, one capable of an extended life not in perpetuity but perhaps longer than the already 90-something Picard would have achieved.

Age is key. Star Trek is getting older. It has spent the last fifteen years, at the tail end of the glory years across the 1990s as the 2000s beckoned, attempting to recapture lost youth. Discovery both took one step forward with stunning visual effects, greater racial and gender representation and serialised storytelling, but then confined itself to familiar sandboxes. No Star Trek series post-Enterprise yet has ‘boldly gone’. The franchise frankly seems afraid of the prospect, afraid of challenging what Star Trek really could be in the 21st century.

Picard reckoning with age, reckoning with nostalgia, and perhaps reckoning with how, no matter how hard you try, you can never really go home again (if home is the previous generation), could be a turning point. Season 2 of Picard almost certainly won’t take us to strange new worlds, but it might begin to show us that consistently falling back on familiar old ground is no path to utopia.