In a new weekly column called Beyond the Screen, author A. J. Black unpacks what we’re all discussing from the world of cinema and television. This time, he consider’s Marvel’s Loki two episodes in and what it might be saying about order and chaos…

There was a moment watching Loki’s second episode where he was described as a variant, in an episode called, indeed, ‘The Variant’, that made the hairs on the back of my neck stand up a little.

Nobody producing Loki at the time understood the impending threat of coronavirus or how it would upend the basic fabric of our global consciousness, but the word ‘variant’ has taken on significantly new implications since the pandemic began. In the U.K., as I type, infections are rising faster than we can vaccinate the population due to the ‘Delta variant’ (thankfully renamed from the ‘Indian variant’ to avoid racist connotations), a highly transmissible version of Covid that could be more resistant to the vaccines we are all desperately banking on to return to normality, the ‘new normal’, or whatever the status quo is.

For all of the talk in the wealthy West of enlightened citizens seeing the various lockdowns as a means of reflection and contemplation at how broken our lives and systems are, most people want a safe return to the security and certainty of pre-Covid times, no matter how in free fall they in truth were. Established systems and familiar, ordered structures in our lives are comforting, and sought at points of national or global crisis. Covid has forced us as a species to adapt, to consider new ways of thinking, but we remain anxious in the face of the powerless nature of the variant—the variable that we cannot predict.

That is how Loki (Tom Hiddleston) is considered, as a character, within the scope of a Marvel Cinematic Universe which is abjectly working, through his series, to combat and reject the establishment thinking of even its own franchise.

Loki has, in just two episodes so far, taken a scalpel to what we imagine we know and understand about the Marvel universe on screen.

Readers of the comics will be less surprised at the presence of the Time Variance Authority (who first appeared in Thor in the mid-1980s, before featuring more prominently in a She-Hulk run) than viewers of the MCU on screen, because they are more specifically used to deliberate variables being thrown into the continuity and narrative of the comic book world. We’ve all heard of the ‘crisis’ in comic-book fiction—an event, such as DC’s Flashpoint, which plays with time and the multiverse in order to often reboot continuity as a means of allowing new readers an entry point to the literally thousands of previous issues and decades of backstory they would otherwise need to wade through. We call these events a ‘crisis’ for a reason, because they deliberately challenge and upset the order we have come to expect.

Loki is not necessarily a crisis event in the MCU in itself but it could represent the start of one, as it will lead directly into Sam Raimi’s Doctor Strange in the Multiverse of Madness. That film is shaping up as a convergence point in the manner we used to see happen in Avengers movies; it will certainly tie Loki, WandaVision, Doctor Strange and lingering elements of Avengers: Endgame together, possibly even aspects of Spider-Man: No Way Home.

What Loki suggests is a broader ‘crisis’ designed to challenge our existing, secure preconceptions about what the MCU is. How else to explain the TVA? This is an agency of cosmic reach who exist, ostensibly, out of time and space itself. They are influential enough to keep the Infinity Stones, the most powerful artefacts in the entire universe which Thanos used to literally wipe out half of creation, inside the desk drawer of a pencil pusher to be used as a paperweight. That, in itself, is a statement of intent.

The series threatens, indeed, to qualify and upend the very existence of free will inside the MCU. The TVA are protecting what they consider to be a ‘sacred’ timeline, after all. There are strong religious connotations between the agents of the TVA—the exact source of whom remains opaque—and the unseen Timekeeper beings who created it and monitor the timeline for variants such as Loki himself.

The word and laws of the Timekeepers are worshipped, by those who know they exist, like a pantheon of Olympian gods, yet with a little bit of the Christian deity thrown in. They are to be obeyed but not seen or heard. The trust in their laws of time are absolute. Who we suspect to now be ‘Lady Loki’ (Sophia di Martino) is challenging those preconceptions, as might Loki himself, given he buys into the mythological perception of himself as a God, fostered as it was by humanity and other races. He seeks an audience with the Timekeepers in a manner any religious person seeks to commune with God.

The difference is that Loki does not operate from a basis of faith, but rather a point of challenge. Though he may be lying, he tells ‘Lady Loki’ he wants to overthrow the Timekeepers, possibly understanding that they represent what seems to be a truly God-like power akin to the Time Lords of Doctor Who; the ability to shape tune into a uniform, corrected and set path that they control. The ability to transform what would otherwise be order into structured chaos.

It is so set in stone that even the time travelling corrections of the Avengers in Endgame were considered part of the natural fabric of time; Thanos always won in Infinity War but he was always then defeated. The actions of Steve Rogers and co appeared to be changing time but they were in fact part of the grand plan, except for the one variable the Timekeepers didn’t account for—the Loki of this series. Not the somewhat redeemed trickster who Thanos killed, but the amoral intended usurper who is beginning to understand a broader, semi-nihilistic reality to his universe.

‘The Variant’ was partly great fun as an episode because it spent time on the kind of theoretical temporal mechanics a similar series like Doctor Who often eschews for adventure, or glides by thanks to magical logic. Loki and his partner Agent Möbius (Owen Wilson) actively debate the meaning behind a timeline where a variant can hide in the shadow of an apocalypse destined to always occur, such as the eruption of Vesuvius and the destruction of Pompeii—the kind of fixed point in time Doctor Who loves to pull out when necessary, or a series such as Lost predicated its own temporal paradoxes on. Some order to the universe is just meant to exist.

Yet the difference is that, in the MCU, that order appears to come from a literal cosmic entity in the Timekeepers, as opposed to any greater unknowable force. The ‘sacred’ timeline is establishmentarian. Variables are crushed not because they threaten crisis, but they challenge ordered principles. They threaten a status quo built on power and control.

In this, Loki understands what it is doing as a series, and more broadly what the MCU itself is trying to do as it moves into a brand new Phase. The ubiquity of the franchise has now moved Marvel into the position of creating, in the best tradition of genre storytelling, allegory for our times; consider just how much The Falcon and the Winter Soldier grappled with racial and social justice, plus inequality, in the wake of George Floyd—it actively reworked aspects of the show, in the wake of Covid, to make a very specific point about a black Captain America in the modern world. 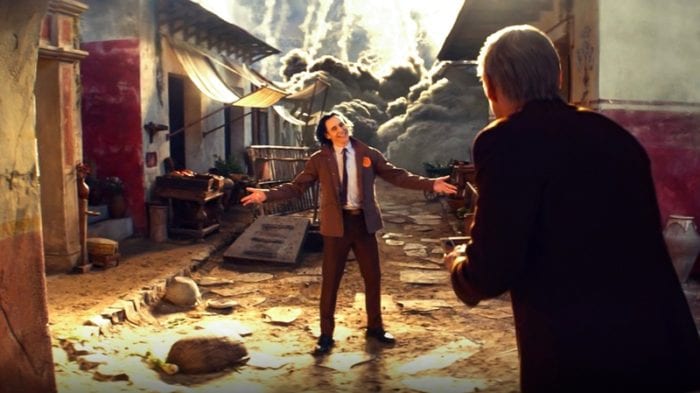 Though it was more fantastical, WandaVision used its magical constructs to depict not just the breakdown of the nuclear family but the existential trauma and grief of loss, and Wanda’s tragic journey in that show speaks to the powerful sense of uncertainty and anxiety in the Western world about how our social structures and family certainties are breaking down. Loki is so far building on this as it begins the fragmentation of a universe bursting at the seams with all of these issues, as variants upend an order that simply cannot hold.

It feels too trite to directly compare Loki as a character to Covid-19, to position him as a variable comparable to a virus that has killed several million people over the last eighteen months, but what he represents certainly adheres to the desire for a lot of people in dozens of societies for change. The Falcon and the Winter Soldier, in line with protest movements, championed change to systemic, institutional prejudice. The whole world is watching.

Loki presents a cosmic, uncanny, temporal cause for such change, one that will upend the ‘sacred’ establishment order that protects power—one that allows titans such as Thanos to do what he did—and perhaps create at first something weird, something strange, something we can’t explain, before giving birth to new approaches and new ways of thinking. There may even be no Timekeepers in the end. Much like our own Western ideas of structured power, the construct of them might be a myth, a story we tell ourselves to sleep at night, when in truth chaos controls us and those who profit are the ones who exploit it.

In being such a devil, will Loki become one of those exploiters? Will he capitalise on such power and attempt to become the kind of God transforming the ‘sacred’ timeline for his own will? Or could we be seeing the birth of a new kind of hero? The variable who helps tear the system down to help us build a new one out of crisis?

Time, as always, will tell.