The following contains spoilers for Evil S2E1, “N Is for Night Terrors”

When I was very young, like single digit years, whenever my dad would get home from work, our dog, Shiloh, would get a treat (Milk Bones, remember those?). I recall one instance, my dad got home and my sister and I both wanted to be the one that gave Shiloh her treat, so Shiloh got to enjoy two treats. Our excited schnauzer was suddenly rendered baffled when two treats were placed on the floor in front of her. She had no idea which treat to take first; looking at one, starting to reach for the other, transfixed in indecision. The plot developments in Evil Season 2’s first episode, “N Is for Night Terrors,” are those treats, dividing my excitement as I prepare for another season of peeling back the layers of the best drama series currently streaming.

Season 2’s first episode, “N Is for Night Terrors,” picks up immediately after the final moments of Season 1’s finale. Kristen Bouchard (Katja Herbers) has returned home after presumably murdering serial killer Orson LeRoux, who had recently been released and was visiting Bouchard under the guise of spiritual reform. She returned home, cleaned herself up, and reached into the drawer below the sink, noticing a rosary in a tray. She picked it up, and, holding the crucifix in her hand, was suddenly burned by it. Has Kristen’s soul been tarnished by her actions? Was LeRoux actually possessed, and Kristen is the new host?

Or is it, as Ben (Aasif Mandvi) discovers, a burn from an object made of cobalt warmed just enough to react to her skin? In the cosmetic drawer, the crucifix was sitting next to a possibly recently-used curling iron, would would have been just enough to cause a reaction in the cobalt. But of course, this is staunchly non-theist Ben and his dogged insistence on the science behind any occurrence, so we’re back to that wonderfully uneasy ambiguity.

The move to Paramount+, much to the chagrin of fans that watched the drama on CBS, nonetheless allowed Robert and Michelle King to produce content that would otherwise not have a chance in hell (no pun intended) of getting past Standards and Practices. This means that Evil’s new home allows it to be, well, more evil. Profanity and more graphic sexual content are allowed on a streaming channel, and should make Evil (which I already noted feels like a premium program) feel a little more comfortable. As a side note, I really like the aesthetic of how S2E1 is introduced: a pop-up book is opened, the page turns to the title, and a hand manipulates a tab to make a demon’s mouth open and close, before the page turns again and the camera zooms into the book as the episode begins.

Short of WandaVision, I just don’t get invested in dramas like I do with Evil very often. The trio’s new case in “N Is for Night Terrors” involves them being requested to perform an exorcism on someone who has been making generous donations to the church on account of the guilt of making a deal with the Devil in his adolescence. It’s probably Leland. Please don’t be Leland, we hate that guy. I was leaning forward, consciously trying to not bite my nails, knowing what was coming. Aaaand, it’s Leland, the wolf in blood-drenched sheep’s clothing, clearly intent to ruin the lives of our heroes. Barely ten minutes into the new season and he’s already on the hunt once again, this time intending to derail David’s (Mike Colter) path to priesthood—with Kristen’s help, if she wants him to stay away from her daughters. 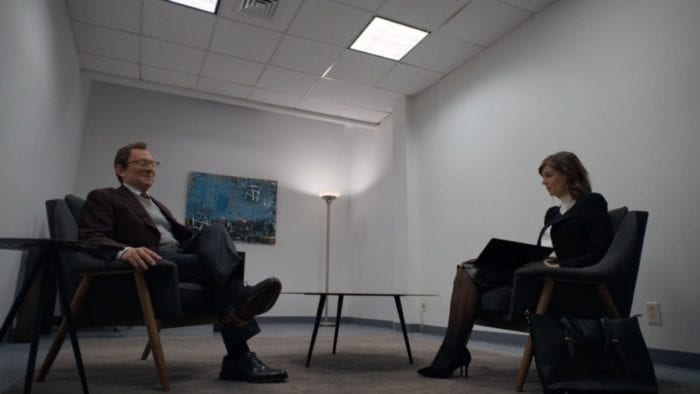 But that’s what makes Leland so great. Michael Emerson is perfect as Leland. You absolutely hate the man and don’t trust him for a second. It’s clear that Emerson is having the time of his life, making a four-course meal out of the scenery as he sneers and smarms his way through his scenes. Now that Leland is fully established as a character, “N Is for Night Terrors” hits the ground running with pitting him against Kristen, and to a slightly lesser extent Ben and David. The Kings’ experience on the legal and political debates in The Good Wife and The Good Fight equip them well to craft breathlessly tense verbal duels here. When Emerson is placed across from Herbers, it makes for the most electrifying moments of the entire episode.

Katja Herbers as Kristen is really pulling out all the stops, more than ever before. The aftereffects of her murderous actions have changed her to be more headstrong, and a little creepier. There is definitely something wrong with her, and Evil is really having fun playing with the possibilities of what that might be. The trio insists on examining Leland’s apartment to detect signs of demonic phenomena to build the case for an exorcism. Ben is using a sort of device to pick up sound around Leland’s apartment, and when he points the device at Kristen, extreme feedback comes through the headphones. The lights are too loud, he says. Once everything is turned off, he can’t hear anything—not even the pipes in the walls.

A very short time after, Leland confirms that Ben does not believe in the Devil, or God, nor does he pray, and proceeds to sinisterly promise Ben that he will, that night, have a dream like he’s never had. And what happens that night but a visitation by a female demon vocalizing a couple of bars from the dangerous earwig from S1’s “7 Swans a Singin’” which found a group of young female students unable to resist singing the same song in unison. Ben even tells himself that Leland planted this thought in his head and the demon isn’t real, but it doesn’t make the moment any less terrifying. The fact that Leland can have such a profound effect on Ben is just as frightening. The team installs a program on Leland’s computer to spy on him via his webcam. For hours on end, Leland is sitting staring at a wall. But in the final moments of the episode, Ben is watching the webcam and notices that Leland is staring back at him, following him with his eyes, before leaning forward and laughing maniacally. Another night terror? Or is is actually happening? Nothing is more likely than anything else with Leland, but holy crap is it creepy either way.

Evil strikes an incredible balance between horror, drama, and surprising moments of very left-field quirkiness—a tense early scene revisits David’s cornfield dream before Leland bursts from the corn, dancing like a goofball to what sounds like “Funkytown.” It’s a disarmingly corny moment that primes Evil fans that Season 2 will up the ante on everything—the enigmas, the weirdness, the jump scares, and bottomless supply of surprises. Congratulations, you’ve got a new reason to look forward to the night before Monday morning.

Evil is releasing weekly on Sundays on Paramount+.