I’m a dog person. I grew up with collies, and then when you move to the city and live on a budget that doesn’t allow for things like a dog walker, you have two choices—grow to like small dogs, or become a cat person. I went the latter route, and while I love my feline overlords, I remain a dog person at heart. These days, I live vicariously through other people’s dogs, and the ones I see on TV. Thankfully, the small screen has a great many doggo stars to choose from, and here are a few of my favourites.

Murray (Mad About You) 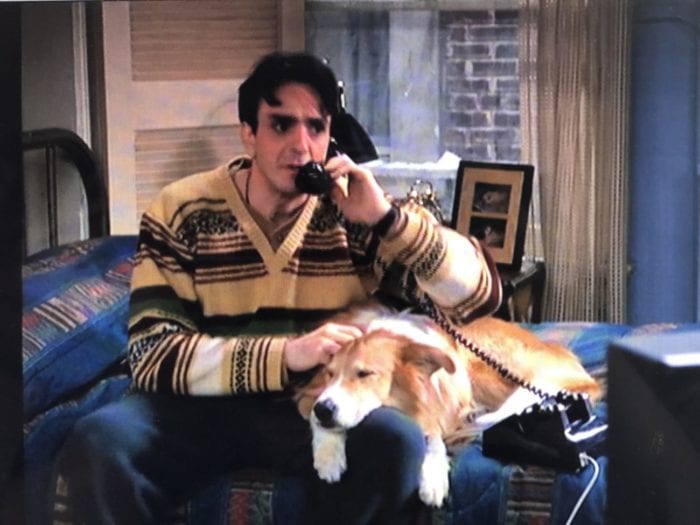 Murray was played by a border collie mix named Maui, and I swear this dog was the smartest dog alive, because he had to play the stupidest dog alive. He appeared in 106 of the 174 episodes, as Paul and Jamie Buchman’s dog, and while some of those episodes involved him lying around being furry set dressing, in a lot of them, he had to actually act. The thing that made Murray so impressive was that he was supposed to be stupid, so whenever the actors gave him a command, there would be a trainer just off-screen, giving him a contradictory silent command, and he had to know which set of commands to ignore. Seriously, Maui was the Olivier of dogs. Later in the show, they brought in Hank Azaria to play Murray’s dog walker Nat, and that which was adorable multiplied a thousandfold. As of this writing, I’m watching the reboot, and the Buchmans have an Irish wolfhound named Walter who seems very sweet, and almost as keen to ignore Paul Reiser as Murray ever was. 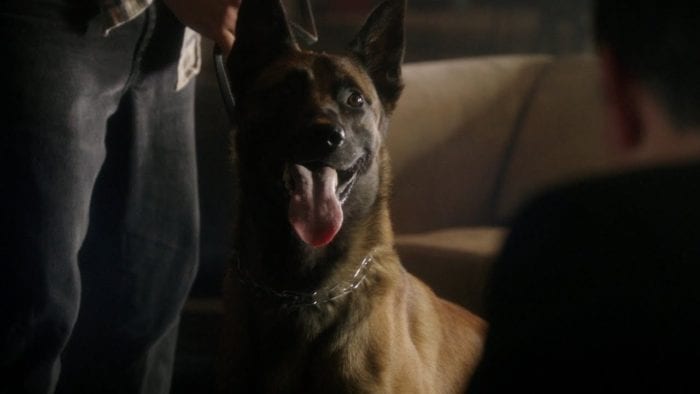 My boyfriend wanted me to watch Person of Interest with him, and honestly, the premise of the show didn’t really grab me. And then, because he knows me well, he said, “also, there’s a dog”. As we watched the show, I would tell people “we’re watching this neat show about this dog named Bear…and also there’s some humans and they do stuff.” Bear is this uber-trained military dog who understands Dutch commands that John Reese liberates from his criminal owners, and renames (Bear, because he ate a bunch of bearer bonds). Not only is Bear a really helpful addition to the crime-fighting team, we get to watch Jim Caviezel and Michael Emerson being the cutest dog dads ever.

If you can watch Rob Lowe sobbing while a three-legged dog licks the tears off his face and not say “AWWWW”, you are not human. Okay, I won’t go that far, but it’s pretty freaking sweet. Champion was April and Andy’s dog, but they let Chris Traeger bond with him (and teach him commands in German) when Chris was going through a bad patch. Played by a good girl named Lucy, Champion also got to wear outfits from time to time, once even getting to dress up as April’s dad, and was always super bad at digging.

Going into its final (sob!) season, I’m kind of renaming this show in my head as Grace, Frankie, and Carl. Somewhere last season-ish, Sol (Sam Waterston) decided he needed a dog, and after struggling with the morals of “adopt don’t shop” (he hadn’t realized that the cute little mutt he bonded with was actually a pure-breed Jack Russell terrier that set him back two large), he wound up with Carl. Sol had been doing what I do, living vicariously through other people’s dogs before breaking down and getting his own, so I feel him big time. Carl, it turns out, is played by a JRT named Penny Lane, with her own website. She dominates every shot she’s in. I thought watching Sam Waterston and Martin Sheen emote at each other was the pinnacle of adorable that this show was going to achieve. Enter Carl…I was incorrect.

This dog is the reason I couldn’t call this list “Favourite Animal Companions”…because Wishbone isn’t a companion, he’s the headliner! It’s his show, and the humans are the companions! Find a kid who grew up in the ’90s, and they will probably tell you that Wishbone helped them learn to love literature. Another Jack Russell, Wishbone was actually three dogs (the main actor dog was Soccer), and voiced by Larry Brantley. They called him “the little dog with the big imagination”, and there’s even a meme that I come across every now and again that says something like, “when I think of classic works of literature, they feature a Jack Russell terrier in a costume”.

This served me very well in college, actually—you know how, when you see a movie or TV version of something before you read it, those actors are in your head when you read the book? So, when I finally got round to reading Pride and Prejudice in college, my professor thought I was terribly insightful because I saw a sympathetic side of Mr Darcy that no one else did. Well DUH, that’s because no one else was imagining him as a Jack Russell terrier! Elizabeth, why are you arguing with him? You should be giving him tummy rubs! What is WRONG with you? I hear whispers of a Wishbone movie, and I would be first in line, especially since Larry Brantley says he would be all in to provide the voice again. 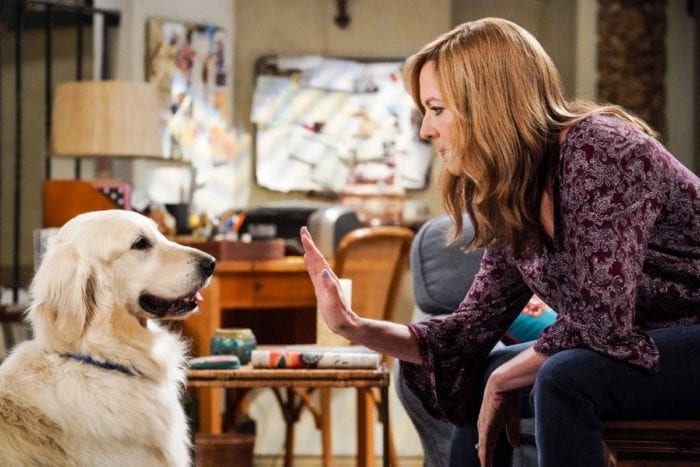 The whole reason I watched this show in the first place was for Allison Janney. And then she got married to William Fichtner, and I’ve crushed him for years, and them as a couple is just glorious. And if that were not enough, Bonnie got Adam a golden retriever named Gus. Gus doesn’t do much except lie around the house and add to the already high cute factor in the household, but considering the two human character actors he’s got as scene partners, I would say he definitely brings it.

Dreyfus was a guest dog on the show, played by a Leonberger named Bear. Dreyfus belonged to their neighbor Harry Westin, and had more appearances on the sister show Empty Nest than he did on The Golden Girls. Nevertheless, he made excellent use of his occasional time with the girls (in one episode, there were even two of him). He even helped Blanche root out a philandering boyfriend one time, by eating said boyfriend’s pants. What a good boy.

The only reason Winston only gets an honourable mention here instead of a whole thing is because I’ve already written about him at length elsewhere, and don’t want to get repeat-y. Any dog who opts out when the rest of the pack is cheerfully eating the face of a bad guy is one special doggo.

Okay, last one, and I’m going to break my rule and go from the small screen to the big screen—but screw it, I never saw this movie in theaters, I saw it at three in the morning on cable, so I’m counting it as TV.

Hank (The Truth About Cats and Dogs)

I will always have a dumb fondness for this movie no matter how problematic it is (and it is VERY), and that is largely because of its leading man. No, I am not talking about Ben Chaplin, though himb am a very hambsomb boi too (give me a break, I got this far without slipping into doggo-speech, allow me a little). I am of course talking about the real star of the film, Hank, the Great Dane. This dog could be a matinee idol in his own right, and steals every scene he’s in even more than animals usually do. He keeps up with both Chaplin and Garofalo as an actor, and clearly this is the chilliest dog in the world because he has to be on roller skates for an entire scene, and has to act as though he is freaking out, while not actually be freaking out. And did I mention he’s an absolute dreamboat? I know Jeaneane Garofalo has expressed dissatisfaction with this movie and its happy ending, and I’m kind of with her on this…I was only happy that the humans got together at the end because I wanted Hank to be able to keep both his hoomans.

Who are some of your favourite onscreen doggos? Let me know in the comments (bearing in mind that if it’s an actual dog movie I probably won’t see it, since those are normally wicked depressing). Also, if you are unaware of the website doesthedogdie.com, you should do, because it is wonderful (though less good for serialised TV than it is for films), and will be a lifesaver.