I love farming simulator games, especially ones where you have your own town or camp. Harvest Moon, Stardew Valley, and of course, Animal Crossing are some of my favourites; I have hundreds of hours in each. The grind of gathering materials, exploring and crafting items, and building up your home is somewhat meditative to me and extremely relaxing. I can completely lose myself in these worlds. I consider it a good sign when you play one and have a bunch of tabs open to different guides—you’re really in it now! After the enormous success of Stardew Valley, a resurgence of this style of game emerged with some incredible titles. You never know, one of these might be your new obsession.

I wasn’t sure how I felt about Cozy Grove at first, but after a month or so of playing a bit every day, I like it quite a lot. You’re a Spirit Scout, camping on a deserted island that you soon realize is full of ghostly inhabitants. Each (real-life) day they’ll give you quests, generally for materials like wood or iron. These can be gathered on the ground or with the equipment you’ll get later. Mining and fishing are here, as well as cutting down bushes with a machete, funnily enough.

Some ask for specific totems or special trinkets that will take days to drop from another ghost. This can be annoying; when I started playing I wanted to do the maximum amount of quests each day, but soon came to treat the game much like Animal Crossing, where I play for a half-hour to do my dailies and then put it away.

My favourite thing about Cozy Grove is the absolutely staggering amount of collectibles; there are almost 200 shells and over 300 flowers alone. Materials, shells, fish, and food can all be donated to a collection for rewards. You can also get badges (you are a scout after all) for reaching certain milestones. There’s a lot here!

Have you ever wanted to own a graveyard? Well, now you can! You’ve been transported into a medieval world where you need to repair and take care of the local cemetery’s upkeep, including preparing the corpses. It’s not done in a gruesome fashion either but with a beautifully detailed pixel style.

As you get to know the townspeople and their troubles (which of course you need to solve yourself) a huge array of tasks will become available to you. There’s the usual wood and metal crafting, but an important aspect is creating books and other paper items, including sermons for the church attached to your cemetery. The sermons give you bonuses, so don’t forget to do them!

As well as this, there are potions, items to make your church better (candles, confessionals), a farm (including a vineyard), a dungeon, cooking and fancy headstones and graves for the cemetery.

Several DLC packs have been released, including the ability to make zombies who do your jobs for you and a tavern where you’ll need to serve beer, food and entertain your patrons. There is so much to do in this game I feel like I will never actually beat it. I kind of don’t want to though because the repeated grind is really satisfying. 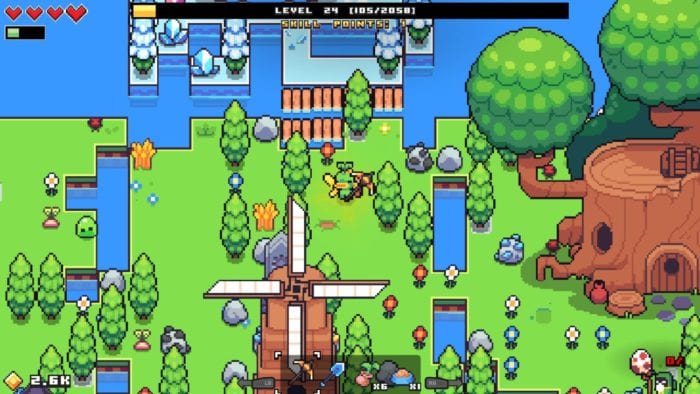 Big things have small beginnings! In Forager you’ll start out on a tiny square island and need to level up, learn to craft and create items before you can buy more islands to explore. It has a really great upgrade system, similar in appearance to FFXII’s Licence Board but simpler. You can choose which paths you want to take first: industry, foraging, economy or magic.

As your world grows you’ll discover different biomes, each of which has a dungeon to explore with its own boss. Generally, farming simulators don’t have dungeons (Stardew has a mine with enemies but no actual bosses) so it gives Forager a good variety of gameplay.

When you start you’re just a little guy with a pickaxe, but soon you’ll become an unstoppable force of nature with lasers, automated crafting stations and powerful weapons. There’s even an official mod pack with contributions from the community and developer. Forager is available on basically everything: PlayStation 4, Nintendo Switch, Xbox One, ios and Android and of course, Steam.

An interesting way to start the game, Littlewood takes place in an RPG world after the evil dark wizard has been defeated. Now the work of rebuilding the town is your main goal. As you gather materials and literally build the terrain of your village, people will arrive to move in. So you’ll need to create houses for them, oh and a store, and a mill… Soon the village that was originally one house will be a full-fledged town.

The pixel style is adorable, with character portraits given more detail. You’ll spend a lot of time exploring the world (through a hot air balloon!), gathering materials to expand your village. All of your skills can level up, from mining to cooking and even merchanting. Besides the houses for the residents, you can also make furniture and other structures to truly customize your world to fit your style—and changing the layout is extremely easy. You can really let your creativity shine here!

When it launched in early access on Steam, Littlewood was fairly bare-bones. Now it’s full of holidays (there is a day system), new events and even a card game. Developer Sean Young has clearly been working his butt off on this and it shows. Littlewood launched on the Nintendo Switch a few months ago too, so you have options if you want to play!